Jesse James on the screen 5: subsidiary roles in the 40s

In addition to Frank and Jesse James leading in Westerns, such as we have been seeing recently on this blog, throughout the 1940s the boys also got peripheral roles in other movies, what you might call ride-on parts. 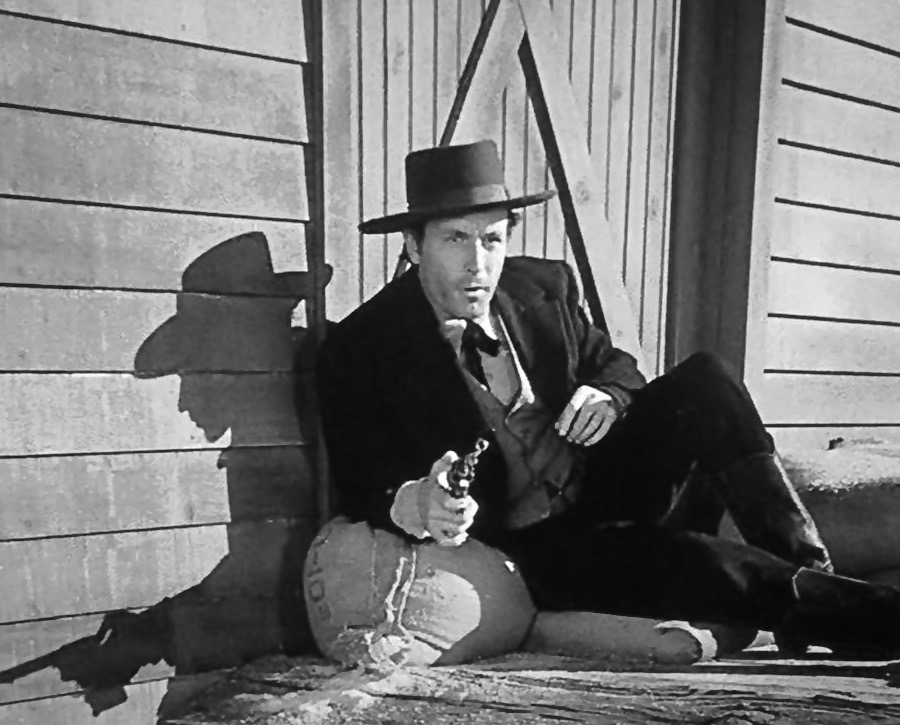 Outlaws were now the thing – good outlaws, naturally, driven to crime by injustice and so on – and other studios wanted to cash in on Fox’s success with Messrs. James. In 1940 Universal brought out When the Daltons Rode and in 1941 Warners released Bad Men of Missouri featuring the Younger brothers.

Frank and Jesse didn’t get to appear in the Daltons one. Well, that was fair enough; Bob, Grat and Emmett didn’t start marauding until the 1890s and by then Jesse was dead and Frank was going straight. The Daltons did get Randolph Scott, though, as Jesse James had, and he stole Bob’s girl away from him just had he had tried to do to Jesse.

As for the Youngers, Jesse (though not Frank) did appear in Bad Men of Missouri, impersonated by habitual bad guy (but not Western specialist) Alan Baxter. Oddly, though, Jesse and the Youngers meet for the first time on a train the Youngers rob, which Jesse was intending to, and they team up for a bit but really are rivals. So history got twisted a bit there. But that was normal. Bad Men isn’t a terribly good picture, I’m afraid. It was Ray Enright’s first (proper) Western as director and he would get better and do some good ones later but this one wasn’t too hot. It’s 1865. Mrs Dalton tells the Younger brothers that Frank and Jesse have taken to robbing trains to get back at the evil grasping railroads, which is a bit odd as they didn’t start that lark until 1873 and were actually concentrating on banks. Next! 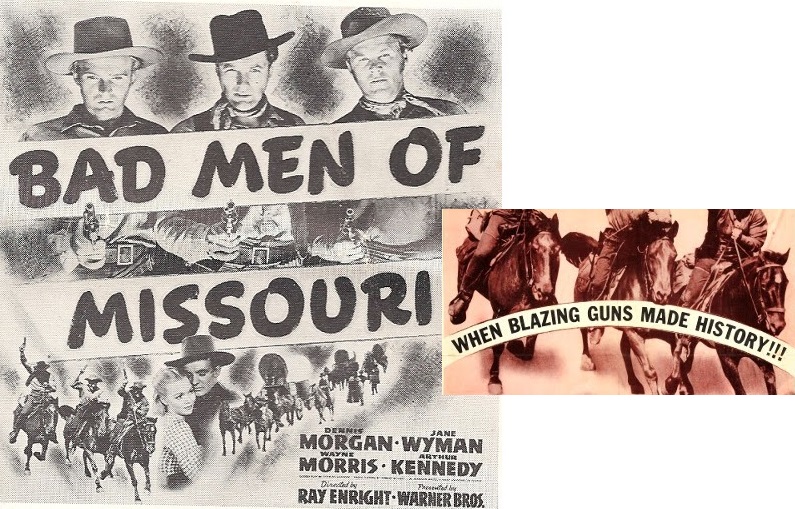 The Remarkable Andrew, from Paramount in 1942, wasn’t a Western at all, and is set in modern times, but it still featured Jesse James. I think it’s actually rather a charming film, as a piece of Americana. An honest bookkeeper (William Holden) is accused of embezzlement but is helped by the ghosts of great figures of American history – George Washington, Thomas Jefferson, Benjamin Franklin, and the star of the show, Andrew Jackson (Brian Donlevy). But Jesse also turns up, spectrally, played by Rod Cameron. Such was the profile of Jesse James by now that he could appear in such august company without a qualm. Amazing. In Dalton Trumbo’s source novel (though not in the movie) Jesse justifies himself: “The injustice of everything! So I decided to take a hand, and there I was, a hero. I was forced into it, and don’t let anybody tell you different.” He doesn’t do much in the film to help, though, just stands around with his twin revolvers.

Jesse got an even smaller part in United Artists’ The Kansan in 1943. This was Richard Dix’s last Western and he plays an Earpish clean-up-the-town marshal come to Broken Lance, Kansas. On his very first day the James gang rides in to rob the bank. Dix kills quite a few but Jesse wings him, before galloping off, never to be seen again in the movie. I suppose it’s a kind of Northfield moment. Jesse is played by none other than George Reeves, future Superman. Well, by this time, Jesse James, Superman, what’s the difference?

Jesse’s next appearance was in Badman’s Territory, an RKO epic (not) of 1946. It was getting that you could hardly make a movie without Jesse James. This movie has a totally preposterous plot and rather too much plot at that. In 1944 and ’45 Universal had had hits by grouping as many horror characters as you could think of in movies like House of Frankenstein and House of Dracula, in which Dracula, Frankenstein’s monster, wolf men, hunchbacks and mad doctors crowded the cast list, and RKO must have thought they would have a go at that with outlaws. After all, outlaws were now the big thing. They would put the James gang, the Daltons, Sam Bass and Belle Starr all in the same movie. Surprisingly, it was a box-office success. The public liked it. Mind, Hollywood is still pulling that trick, with cartoon superheroes jostling cheek by, er, jowl in blockbusters of unending direness.

Lawrence Tierney is Jesse James, which is good. I always like a Tierney and Lawrence was just as much a rowdy as his brother Scott Brady, and ideal as the hooligan outlaw. Lawrence didn’t actually do many Westerns, more’s the pity, though in one of them, Best of the Badmen in 1951, he was Jesse James again. The great Tom Tyler (star of silent and early talkie Westerns, Captain Marvel and small player in many a John Ford oater – he was Luke Plummer in Stagecoach – as well as a host of TV shows in the 50s) is brother Frank but, as so often in Jesse James movies, he is just a minor character to be ordered about.

Doubtless Jesse and Frank were recognized, because both Randolph Scott and Gabby Hayes are there, and they were pals of the boys, as we know (see Jesse James and Days of Jesse James).

Though a very silly film really, it is still a lot of fun. There would be a sequel in 1948, populated by Billy the Kid, the Daltons, the Youngers and the Sundance Kid – though no James boys. It was another of those sequels (like The Return of Frank James) which was as good as or even better than the original.

Randy would bump into Jesse yet again in 1949, briefly anyway, in Fighting Man of the Plains, a fun Fox oater directed by Edwin L Marin and a Frank Gruber yarn (Gruber had also been the source of The Kansan). This time the Missouri outlaw is played by Dale Robertson, pre-Tales of Wells Fargo but up-and-coming, in a cameo. Randy is Marshal Dancer of Lanyard, Kansas (a sort of Dodge/Abilene type place) and Jesse, who had fought with him at Lawrence, Kansas under Quantrill (actually Jesse James was almost certainly not there, though Frank was) turns up to rob the bank. But after talking to Randy, Jesse says, helpfully if ungrammatically, “I hate to think of you and I looking at each other across guns” and leaves town. Jesse does give a parting warning, though: “I might be back sometime. You might not always be marshal.” Jesse James is only there, according to film historian Bob Herzberg, as “another example of Gruber’s name-dropping.”

In addition to all these ride-on parts in the 1940s, Jesse James (and sometimes Frank) would appear in three Republic serials (1947, 1948 and 1949) and in probably the best Jesse James film of the decade, Samuel Fuller’s I Shot Jesse James (1949). But these feature Jesse largely so we reserve for them a separate post. Thus, dear e-pards, do click back on Jeff Arnold’s West soon. You wouldn’t want to miss any celluloid Jesse Jameses, I am sure.