We’ve been looking at portrayals of Jesse and Frank James on the silver screen. So far, the movies we have examined have been sort of ‘official’ and big-studio affairs, the 1921 silent Jesse James Under the Black Flag, starring Jesse James’s son Jesse E James, Paramount’s big picture (now tragically lost) Jesse James of 1927 starring Fred Thomson, and, in the talkie era, the two Technicolor Fox blockbusters Jesse James (1939) and its sequel The Return of Frank James (1940). Click the links to read about those.

But in the 1940s Jesse was the darling of the B-Western – or if you don’t like the term B-Western, the low-budget second feature or programmer. In the 40s we’d get a comedy, some serials and pictures with Jesse in a ride-on part. The decade would end with a more original, more edgy and more lauded Jesse, though that was a low-budget effort too.

It started even before the 1940s dawned. After Fox’s Jesse James had wrapped (November 1938) but a month before its première (January ’39), Republic started production on a Roy Rogers picture featuring the Missouri outlaw, which would be released on December 20, just soon enough, I suppose, to qualify as a 1930s picture but only barely and really part of the 40s series. It was titled Days of Jesse James. 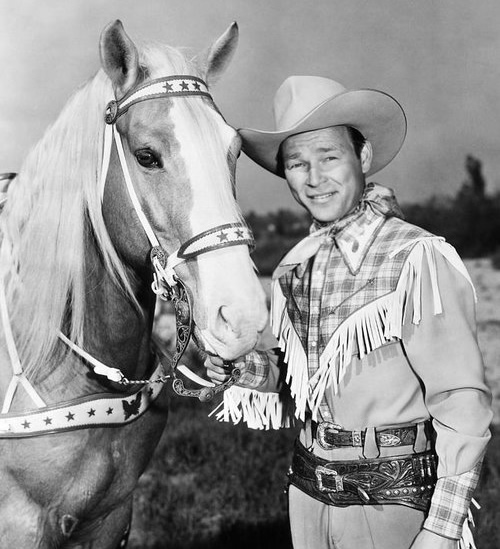 Roy at that time was embarking on his period of fame. After success and popularity singing with the Sons of the Pioneers, he had started movies in 1935 in supporting parts, growing in confidence and number of fans, and he finally won the starring role in Republic’s Under Western Stars in 1938. Pretty well right away he was a matinée idol, and a competitor to Gene Autry as the nation’s favorite singing cowboy. At the time of Days of Jesse James an article in The Los Angeles Times reported, “Latest cowboy hero to hang up nation-wide box-office records, with both his films and personal-appearance tours is Roy Rogers.”

Roy didn’t play Jesse, though. In Days he is Roy Rogers, a “peace officer”, an undercover detective really, sent to investigate the James gang robberies but harboring a sneaking regard for Jesse.

Jesse himself is played by Don (not yet ‘Red’) Barry. A Texan and former college football star, soon after this picture Barry became ‘Red Ryder’ for Republic – much to the dismay of the serial’s directors John English and William Witney. They had wanted a tall actor, and they both rapidly came to find that they couldn’t stand him. He certainly wasn’t an easy person to get on with, and modesty was not one of his virtues (even though he had quite a lot to be modest about). Barry later said, “Tyrone Power had just made a picture as Jesse James, too. I knew Ty well, and this is no reflection on him, but the critics’ comparisons between my Jesse James and his were all in my favor.” In Don’s dreams, maybe. In Days he is a rather dashing Jesse with twin tied-down Colts in side holsters.

Brother Frank (Harry Worth, billed for some reason as Michael Worth) is suave but it’s a pretty minor part and Worth was only billed tenth. The reason he is suave is because he was an Englishman. He came to the US in 1929 and took suave cad parts. He would be crooked banker Calvin Drake in Red Ryder.

Second billing went to Gabby Hayes (winner of the Jeff Arnold’s West All-Time Greatest Sidekick Award, eat your heart out, Oscars). George Hayes was already well established as Hopalong Cassidy’s cranky old-timer sidekick Windy but after a salary dispute he left Hoppy. Legally precluded from being “Windy”, he became “Gabby” Whittaker and a regular pard of Roy. In 1945 he said, “I’m very fond of Roy Rogers. We never had a difference between us. Roy’s a nice kid to work with.” We meet Gabby returning from California with his granddaughter Mary (third-billed Pauline Moore) with $40,000 – he struck it rich – and in no time he gets involved with Roy in the detecting business when the forty grand is stolen. Mary is handy for Roy to sing to and make eyes at.

The villains are Captain Worthington (Harry Woods), a crooked railroad detective, and a banker, Wyatt (Arthur Loft) who is equally crooked. Obviously. All railroad men and bankers were crooks in those days, as you know. As you may imagine, however, they get their come-uppance at the hands of our hero Roy, ably assisted by Trigger. Woods had bad-guy pedigree, actually, because he had played Bob Ford in the 1927 Jesse James.

Cole Younger (my hero Glenn Strange) has a very dashing mustache and the sheriff (Fred Burns) is rather tall and distinguished. Frank and Jesse’s mother Mrs Samuels (like most movies they added an –s to the Samuel name, and they also named her Martha for some odd reason), played by Ethel Wales, and her doctor husband (Wade Boteler) are both rather posh, and there’s Buster, their son, Jesse’s young half-brother (Scotty Beckett, 10). This Buster must be the real Archie, the simple-minded boy killed in the 1875 raid on the James-Samuel place by Pinkertons, the raid in which Mrs Samuel had half her arm blown off by a fire-bomb. However, we clearly couldn’t have maiming and death like that in a Roy Rogers picture, so Buster and Mrs Samuels are hurt but not killed because Roy saves them when Capt. Worthington, the swine, firebombs the ranch. It was also the railroad thug, you remember, who had thrown the bomb in the 1939 Jesse James. The Pinkerton agency was still going then (still is, as far as I know) so maybe the film-makers and their lawyers were nervous of using their name for the killers and maimers. Scotty Beckett, by the way, so the IMDb bio tells us, “was one of the cutest, most successful child actors of the 1930s and 1940s.” Sadly, however, “His descent into a life of alcoholism, drugs, and crime remains one of the most tragic of Hollywood stories.”

Of course the railroad is the problem. Jesse and Frank are only robbing trains to get back at the evil railroad. When Jesse brings home the loot to Ma, he says it’s “a little donation from the railroad company [for a local farmer], kinda makes up for the way they cheated him out of that right-of-way.” This was already, after the 1939 and ’40 pictures, the accepted ‘fact’. It conveniently excused the James gang James’s depredations and gets Jesse and Frank off the moral hook for robbing. They have become stalwart defenders of honest farmers against ruthless corporate (and Northern) interests.

This picture and its successor were directed by Republic’s go-to for Westerns, Joe Kane. A former professional cellist (not many Western directors could say that), he said, “I love making Westerns. I like the scenery and the outdoors. The sense of excitement. The horses and the cowboys.” No one would claim that Kane was a majestic artist in the John Ford/Howard Hawks vein but he was certainly a professional, able to churn out quality product on time and on budget, and studio boss Herb Yates greatly appreciated that – giving him producer credit. Variety said, “Joseph Kane, director-producer, has paced his yarn with the skill usually found in better programmers.”

Days of Jesse James and its sequel were 53-minute black and white progammers with no pretensions whatever but great fun. What I like about them is their honesty. On the title screen of both we get the plain declaration:

“The characters and events depicted in this motion picture are fictional and similarity to actual persons, living or dead, is purely coincidental.”

There you are, you can’t say plainer than that. Would that more Westerns were so straightforward, rather than going for the ‘This is how it really happened’ line (and lie).

There may of course have been good legal reasons, with powerful studio 20th Century Fox jealously guarding the rights to Jesse.

Anyway, it’s all harmless fun. And the public thought so too. The picture did well enough to warrant another go round.

Jesse James at Bay is very similar. The railroad company is the villain again. Gabby, who has now become sheriff, knows there’s only one man bold and brave enough to beat the bad guys and he sends to Nebraska for Jesse (he’s been in hiding there apparently and wasn’t shot by Bob Ford). However, this time Roy is Jesse (though he still rides Trigger). There’s no sign of Frank in this one but Jesse is still active. All outlaws have adorers who believe that they didn’t die where or when they were said to have done, and survived to do more Robin Hood-type robbing.

There were ‘pretenders’ who claimed to be Jesse for long after, one in Excelsior Springs fifty years after the James assassination, another in Tulsa, Oklahoma in 1934. Perhaps the most famous was J Frank Dalton, as late as 1948 (when Jesse would have been 101). When he died in 1951 he was buried in Texas with ‘Jesse Woodson James’ on his tombstone. And curiously, right there too John Wilkes Booth was buried. He survived too, you see. And not forty miles away, Brushy Bill Roberts is buried. He claimed to be Billy the Kid.

There’s the old ‘double’ trick, with lookalike Clint Burns (also played by Roy) and loads of mixed-up identity. In fact Roy had pulled this trick before. In Billy the Kid Returns (1938), also directed by Joe Kane, though with Smiley Burnette instead of Gabby sidekicking, Roy is a dead ringer for the storied outlaw, and he poses as Billy to help out honest ranchers. One day we’ll come to celluloid Billy the Kids on this blog, but we’ve still quite a bit of Jesse to go yet.

Republic must have watched Fox’s The Return of Frank James enviously because they went one better: they had two female reporters, Polly and Jane (Sally Pane and Gale Storm). Polly is mighty handy with a derringer and smitten by Jesse (not Clint, she can tell). There’s a bad-guy gambler who tries to shoot Jesse with a derringer too. A two-derringer picture! That’s the kind for me.

Roy sings a song to Polly as they are ridin’ along. Yup, it’s got all the ingredients. 53 minutes of rootin’ tootin’ fun. By the way, Roy seems to have remarkably faithless to Gabby’s granddaughter Mary, she who featured so attractively in the 1939 picture. She is not mentioned at all in this one and Roy is free to dally with the St Louis lady journalists. What happened to Mary? Well, one doesn’t like to be indiscreet.

Jesse is a real Robin Hood, robbing the trains and giving the railroad’s money to local farmers who risk being evicted. This exchange will give you the idea:

Reporter: You have? Is he really a ruthless outlaw and killer? Gabby: Course he ain’t. Why, he wouldn’t hurt a fly. Unless it was workin’ for the railroad.

To be honest, I wouldn’t necessarily put these two Roy Rogers Jesse James movies in the must-see-at-all-costs class.

Unless you are obsessed with Westerns and a Jesseholic.

PrevPreviousThe Return of Frank James (Fox, 1940)
NextJesse James on the screen 5: subsidiary roles in the 40sNext

PrevPreviousThe Return of Frank James (Fox, 1940)
NextJesse James on the screen 5: subsidiary roles in the 40sNext
Jeff Arnold © 2023 – All rights reserved – Designed by BetterCallChris
Scroll Up