What is a B-Western anyway?

The term B-Western seems to get people quite exercised these days. I think some folk find it rather demeaning, suggesting low quality and production values.

The word B-movie was first coined in 1948 and was used to refer to second-feature films that were shown on a program. In the 1930s and 40s when you went to the movies, you did exactly that: as well as the main feature, theaters screened maybe a newsreel, a cartoon, a ‘chapter’ of a serial possibly, and a ‘second feature’ before the main advertized picture. At the time of the Depression movie studios and theater chains (and in the so-called Golden Age many distribution chains were owned by big studios) suffered badly, laying off staff and cutting back, but found that to entice in paying customers they needed to show more than just a movie. All the major studios, even MGM, produced shorter pictures, often ‘genre’ ones (horror, sci-fi and, especially, Westerns) and they sometimes set up special separate departments, called B-units, to make them. They could make efficiencies by recycling sets, costumes, and so on from other higher-budget films. Some smaller or slightly smaller studios, such as Republic or Monogram, even specialized in such product. The Encyclopedia Britannica tells us that “By 1935, 85 percent of American motion-picture theatres were programming double features.” Margins were not great but there was a demand. So called A-movies attracted audiences and were rented to theaters for a percentage of the box office receipts, while B-pictures were rented at a fixed rate, making the profits easy to calculate, if small.

In order to make money, these B-pictures had to be low-budget affairs made on tight schedules. But with movie-going still big business in the pre-TV days, even despite the economic crisis, many of these films had to be produced. So there was a kind of production line, or maybe ‘sausage machine’ process as product was churned out cheaply to satisfy demand.

Many of the early talkie screen cowboys of the 1930s, through into the 40s, made these B-Westerns as a kind of series, returning as the same character and producing maybe one a month – and getting well known for them. This was where John Wayne learned his craft, for instance. The pictures usually lasted about an hour, were in black & white (even after color became common for A-pictures) and were often pretty formulaic in conception and writing. But they were extremely popular, especially (though not only) with juvenile audiences.

But the term B-movie did not necessarily mean bad movie. Many of these motion pictures were actually influential and lauded. Some had noted directors. Some famous horror and crime noir pictures of the 40s, for example, such as several of the RKO ones, fall into this category.

As for Westerns, many of the second-feature ones were often really quite good. Some of the directors of these films were highly professional and expert. Fred Sears, Lesley Selander, Joe Kane, William Witney, and many more knew what they were about. Roger Corman was sometimes called the King of the B-Movie (or the Pope of Pop Cinema). His 1955 Western Five Guns West was made for $60,000.

And let’s not forget that some great Western directors, such as Anthony Mann, got their apprenticeship in B-movies. Even John Ford’s Stagecoach (1939), with a budget of over half a million dollars, has been described, perhaps because of its ‘modest’ scope, more intimate than Fox or Warners blockbuster Westerns of the time, as “the best B-Western ever made.” Though for me it is hard to call Stagecoach a B-movie!

Second features in the US began to die in the 1950s and production of them largely ceased by the end of the decade. Many of the B-units moved into producing similar material for TV screening. But the term B movie continues to be used in its broader sense to this day. It started to be coined to describe, in a derogatory way, low-grade exploitation movies of various kinds but can also be a term of praise for ‘minor’ art-house-style pictures which are often of considerable artistic or creative quality. The adjectives ‘independent’ or ‘cult’ are often used synonymously. The Wikipedia article on the subject says, “The term is also now used loosely to refer to some higher-budget, mainstream films with exploitation-style content, usually in genres traditionally associated with the B movie.” Webster’s defines it simply as “a cheaply produced motion picture”.

So the term is fluid, in the sense that different people mean different things by it. Some people insist, even dogmatically, on using it to describe only a movie produced below a (perhaps arbitrarily) fixed dollar value; others only to refer to a second feature; others still use it more generically to describe worse movies – or even better ones!

As far as Westerns go, the form has its fans. We mentioned the 1939 picture Stagecoach above. Well, that year Fox started the year with a major Western, Jesse James, definitely an A-picture, with top star Tyrone Power heading the cast and Randolph Scott in a smaller part, in Technicolor, with a big budget, shot in expensive Missouri locations. Later that same year the studio released Frontier Marshal, in black & white, with a much more modest budget and this time Scott topping the billing, as Wyatt Earp. By many definitions this was a B-Western, although at 71 minutes it may or may not have been shown as a second feature. Yet it was extremely well received and commercially successful to boot. Actually, in many ways it was a better Western than Jesse James. Both pictures were historically ludicrous but that doesn’t matter; Western movies aren’t designed as documentaries. Yet qua Western, I actually prefer Frontier Marshal to Jesse James, B-movie or not. 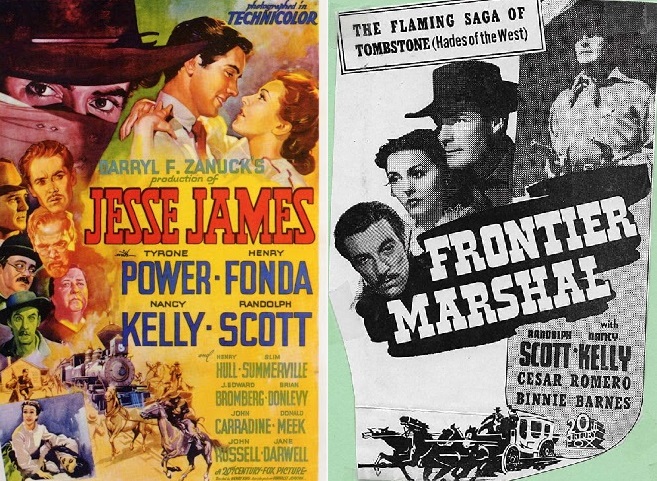