Next time you point a gun at me, shoot

We are in the throes of looking at Western novels and the movies made from them, and today another pair, this time both good: Vengeance Valley, the novel by Luke Short, 1949, and the MGM movie of the same name, 1951.

Frederick D Glidden (1908 – 1975) was a fine writer of Western stories and one of my favorite authors. More about him tomorrow. His books are tightly-plotted, full of authentic detail and have strong, memorable characters. He wrote under the nom de plume Luke Short, a moniker he presumably borrowed from the dandy and gambler-gunfighter of that name (1854 – 1893) – another interesting character, but that’ll be for another day. 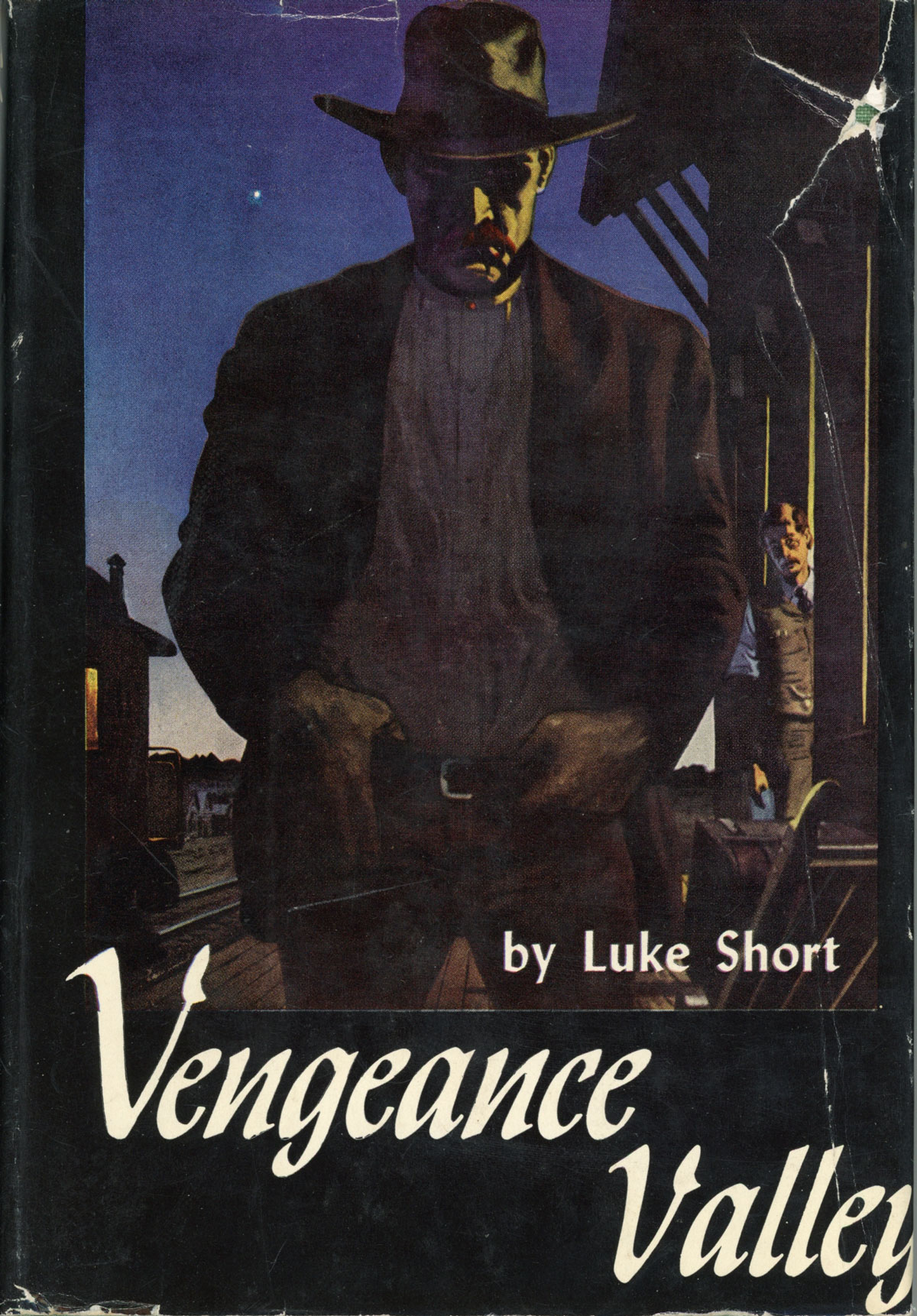 But the writer Short is definitely worth reading. He wrote dozens of novels, from The Feud at Single Shot (1935) to Trouble Country (1976, published posthumously).

A remarkable number were turned into films. This is because the books were shortish and lent themselves to cinematic treatment, especially because, as I have said above, their plots and characters were so strong, they were full of action and they reeked of authenticity. In fact when I read them (or re-read them!) I even find myself ‘casting’ the ones that weren’t movies, imagining this or that actor in the roles. Randolph Scott, often.

But the 1949 novel Vengeance Valley is a good example of one that was filmed.

The 1951 Western movie that MGM made of it has an almost documentary feel to it at times as we get a cattle-drive with voiceover commentary by one of the drovers (Carleton Carpenter, very well played). The cowboy scenes are true-to-life and there is skillful cutting out of steers to admire. There are impressive numbers of cattle – no ultra-low buget cowboy movie this. 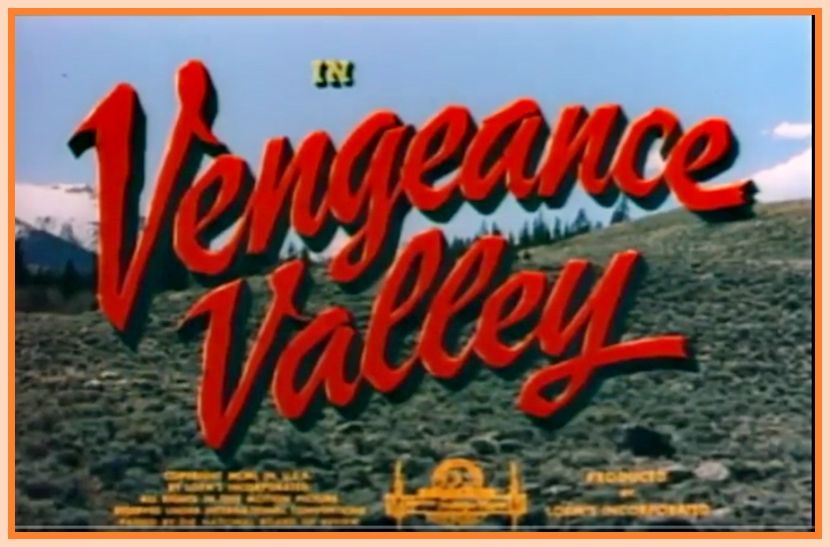 But it’s also a family drama. Noirish Westerns which told of bitter family conflict had been all the rage in the late 40s, and this one was somewhat in that tradition, with its semi-Cain and Abel aspect. It was the tale of how the misdeeds of a wastrel, ne’er-do-well son, Lee Strobie (Robert Walker), are foiled by the sturdy, decent adopted son and foreman, Owen Daybright (Burt Lancaster). You can tell Lee is a bad one when he says to his wife, after beating a horse, “A good whipping never hurt any filly” (a line not in the book).

Walker was a tragic character, who was twice divorced by the age of thirty and suffered from alcoholism and mental illness. He died in August 1951, aged 32, of what is described as “adverse reaction to prescription drugs”, only six months after the première in Cañon City of Vengeance Valley, the movie. He’s probably best remembered for his role in Hitchcock’s Strangers on a Train, released after his death. Westernwise, he only did Vengeance Valley and the turgid and dull The Sea of Grass (1947): he was a wastrel son in both.

As for Burt, he would of course become one of the leading Western actors, well remembered for the likes of Vera Cruz and Apache, both helmed by Robert Aldrich in 1954, his steely Wyatt Earp in the John Sturges-directed Gunfight at the OK Corral (1957) and his superb performance in John Huston’s The Unforgiven (1960). I am also especially fond of two of his later oaters, Valdez is Coming (1971) and Ulzana’s Raid (1972). He led in fifteen altogether. But Vengeance Valley was his very first – and an excellent start.

The old rancher, Arch Strobie (Ray Collins) pretends otherwise but knows, deep down, that his son is no good. The film makers have put Arch on crutches, like Edward G Robinson in The Violent Men, which he wasn’t in the book; it isn’t quite clear why – perhaps to make him more vulnerable, or to justify his lack of control over the ranch.It’s quite a daring theme for 1949/1951. A town girl (Sally Forrest) has an illegitimate baby and will not reveal the identity of the father. It is clear to us from the first chapter (and first reel) that it’s Lee. Lily’s brothers, the Faskens, arrive, played in the movie by John Ireland and Hugh O’Brian, both very good (and the latter very unEarpish). They will have the name of the father and force a marriage or there will be hell to pay. Because Owen generously gave the girl some money, they are convinced he’s the dad.

There’s good Colorado scenery (round Cañon City, where many of the early silent Westerns were filmed) photographed by George J Folsey.

The music is low-key, not intrusive, but subtly good. It was by Rudolph Kopp, who the same year wrote for the fine Westward the Women.The Short story (as it were) is adapted for the screen by Irving Ravetch, later writer of Hud and The Cowboys. He did a good job. Several important changes are made apart from the detail of the crutches. Chiefly, the characters of Jen, a neighboring rancher, and Edith, Lee’s wife, have been combined. Owen loves rancher Jen in the book and rather despises the gold-digger and unWestern Edith, but in the movie, he and the Jen/Edith figure (Joanne Dru, Mrs Ireland, in fact, of Red River and She Wore a Yellow Ribbon fame) are in love. While changes of this kind are often worse than the original book, in this case it adds well to the rivalry between Lee and Owen and is probably better.Another change is made in the ending but I will not discuss that here to avoid spoiling it for you if you have not read the book and/or seen the movie. Perish the thought.

Burt stands for no nonsense when one of the Fasken boys points a gun at him. He says, “You’ve scared me twice tonight. Next time you point a gun at me, shoot.” The bad man later takes him at his word but should have known better.Richard Thorpe directed tidily. He had been making two-reelers and low-budget Westerns, especially with Jay Wilsey and Buddy Roosevelt, since the early 1920s. His first talkie oater was The Utah Kid in 1930 with Rex Lease. He went on to do Jailhouse Rock.

Vengeance Valley is no epic with sweeping, nation-building themes. Short’s books weren’t like that; he was more interested in the intense interplay of a small number of characters, rather in the way those late 50s Budd Boetticher/Randolph Scott Westerns were. But it is a good story and Lancaster does an excellent job.

Bosley Crowther in The New York Times liked it, calling it “creditable entertainment”. He said, “The setting is the range country of the Rockies and the action includes scenes of noisy, lowing cattle, hard-riding cowpokes, rustling and a couple of lusty fights, with and without sixguns. Vengeance Valley has a considerable amount of excitement, and there is an almost documentary quality about the long sequences which provide a graphic picture of what it is like to be out on the range at round-up time. Richard Thorpe has directed these scenes expertly.” But the critic was uncertain that the film was entirely suitable for younger audiences. “It is, however, a Western which might give the kiddies some unnecessary ideas about life in the open spaces”

According to MGM records, the picture made a good profit of $841,000. For some reason the studio never renewed the copyright; this means that it’s in the public domain. The downside of that is that copies around are often very poor quality, so beware. But if you can find a good print, it’s worth it.