Let us continue with our thread of cavalry Westerns. Very soon after the solid but non-great example The Horse Soldiers (1959), which we shall review anon, John Ford began work on another oater about his beloved cavalry, Sergeant Rutledge. 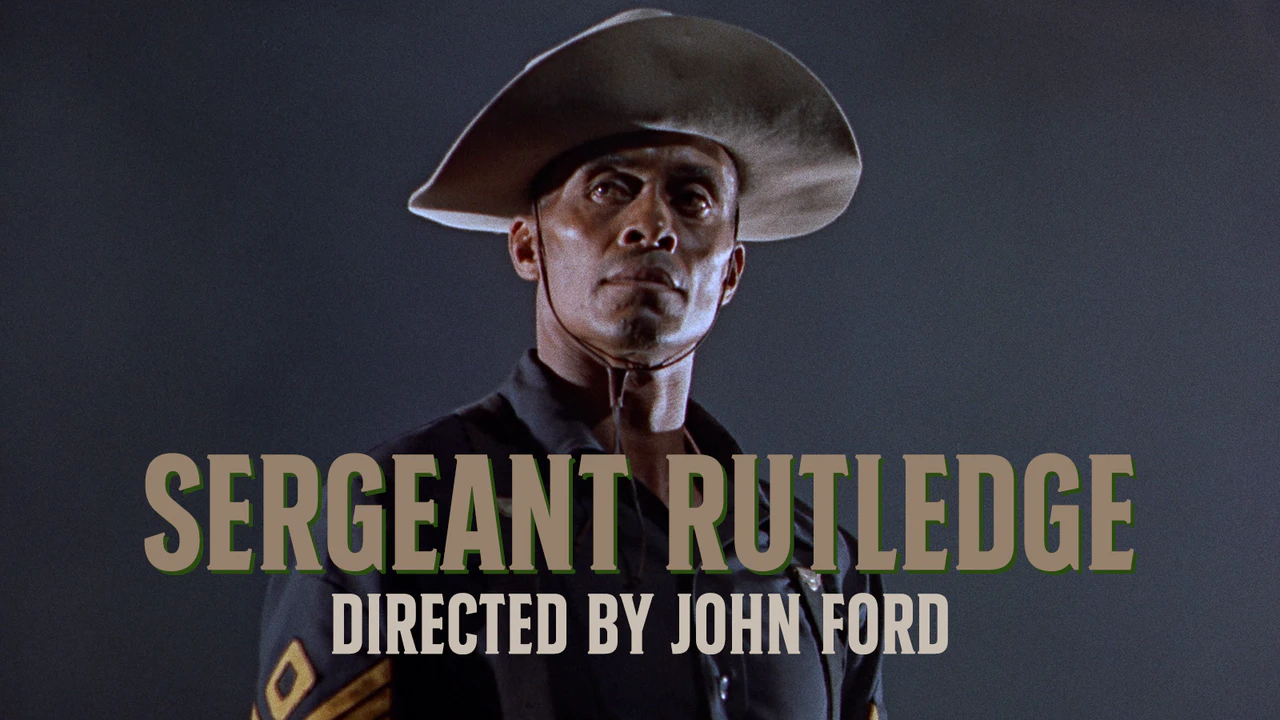 This began life as an original story entitled Buffalo Soldier by Willis Goldbeck. Goldbeck took it to short-story and script writer James Warner Bellah, a John Ford regular, and together they prepared a treatment for Ford. Ford took the project on quite willingly but he was, frankly, in decline. His former professionalism, last seen on the set of The Searchers, was on the wane. He seemed almost to have lost interest, and some of his non-Western pictures between The Searchers and The Horse Soldiers had been downright bad – the stodgy British police procedural Gideon of Scotland Yard, for example. Bellah said, “[Ford] had always been a real tyrant in story sessions, needling and picking away at you. … But on Rutledge he was awfully mild. Whenever an important subject came up, he just said, ‘Whatever you think is fine,’ or ‘Just write it as you see fit, and I’ll get it on film.’ This wasn’t the Jack Ford that I knew.”

Warners were interested in the project but Jack Warner was insisting on Poitier or Belafonte as star and Ford wouldn’t play ball. “They aren’t tough enough!” Ford wanted an ex-UCLA football player named Woody Strode, who couldn’t act and couldn’t ride. Strode was a splendid physical specimen said to do a thousand sit-ups, a thousand push-ups and a thousand knee-bends every morning (he can’t have had time for much else). He had just finished fighting alongside Kirk Douglas as Draba in Spartacus but Ford knew him because his Hawaiian wife went to school with Ford’s children. Jack Warner finally backed down and Ford got his way. Woody it was.

Ford acted out every one of Strode’s scenes himself first, to show the actor what to do, and often even went back to the silent-movie technique of calling out instructions during the scene. He bullied Strode unmercifully, as he often did with a chosen victim on the set, verbally and even physically abusing him, kicking him and throwing rocks at him. He could be a very unpleasant man. But it got the results. Strode put in a magnificent performance as the buffalo soldier accused of raping a white woman.

Even as late as 1960 the idea that a white girl may have been raped by a Negro was still deeply shocking (the color of the assailant’s and victim’s skin was the shocking part) but the film prefigures the 60s civil rights movement by suggesting the prejudice and skirting round the issue and the terms. It’s a serious film which deals with serious issues. For once, the French film title may have been better: Le Sergent Noir.

The civilians want to lynch Rutledge even before the trial. The officers’ wives (who include Mae Marsh) are titillated by the ‘spicy’ affair. Both groups are shown as overtly racist and rather repellent. To the colonel’s lady (Billie Burke), Rutledge, whom she cannot even name, is nothing but a dangerous sexual animal.

Then there is the institutional racism of the court, the members of which are surprised by the ‘not guilty’ plea; they assumed Rutledge had done it. Then, most troubling of all, there is the internalized racism that Ford shows in us, the (white) viewers. Ford sets the scenes so that we all assume too much, though this, of course, only works on the first viewing.

Strode was fine. But paradoxically the rest of the acting, from the professional cast, is so-so, descending to the downright wooden when Lucy (Toby Michaels) is talking to the store boy (Jan Styne). Willis Bouchey doesn’t quite cut it as the president of the court – it needed Ward Bond. Jeffrey Hunter (Martin Pawley in The Searchers) is handsome as the defending counsel but little more. The love affair is pretty dull.

Constance Towers as that love-interest (returning from The Horse Soldiers the previous year) does not convince any more than she did in The Horse Soldiers. She is a weakness of both films. Judson Pratt, who had assumed the role of comic drunken Irish sergeant after Victor McLaglen died, is back, promoted to lieutenant. Carleton Young, another Ford regular, is a captain. Really, the cast was much less than stellar and some of it wasn’t even competent. Hunter and Towers got top billing, rather shamefully, with Strode only fourth. In the publicity still for the movie (below), Rutledge himself only appears in third background. This is racism of yet another kind.

There is the usual Ford attempt at broad humor, clumsy and inappropriate in a case of this sort. It is thought amusing that the officers of the court martial drink while court is in session or adjourn to play poker.

So this movie is by no means top-drawer Ford. The fault is not really in the dialogue, although it does end very melodramatically. Perhaps the courtroom drama/flashback format was doomed to failure from the start. Because there’s too much studio recording and too little Monument Valley location work (only nine of the forty-three days were on location), and because so much of the action is set in the court room, this Western is static and slow. There are action flashbacks, occasionally excellent, but the ensemble is really little more than a Western Perry Mason.

Or perhaps Ford just had lost his grip.

Visually, it’s quite interesting. When Rutledge is under suspicion, early in the film, he is photographed (by Bert Glennon, a Ford go-to, especially for black & white, but this time working with color) in dark flickering shadows. As shot by Glennon it’s almost more a noir than a Western. When Rutledge bravely and self-sacrificingly saves his fellow soldiers he is filmed in blazing sunlight. It’s a much darker film than The Horse Soldiers but it still elevates the community of the cavalry, where these buffalo soldiers find a kind of freedom they would not have elsewhere.

Sergeant Rutledge is essentially a 1950s Western in its look and acting. When you consider that it came out in the same year as the brash modern actioner The Magnificent Seven, for example, you realize how old-fashioned it was. Yet its theme of racial discrimination is very much a 1960s one.

It did miserably at the domestic box office, grossing only $784,000. It did better overseas, making $1.7 million, but was still overall a financial failure. Ford blamed Warner Brothers for not promoting it. “Warners sent a couple of boys on bicycles out to sell it.” Suddenly Ford found himself with no offers. At a loose end, he went down to ‘help’ John Wayne on the set of The Alamo.

Ford and Strode became good friends. In his autobiography Woody stated that Ford gave him the $2,000 to pay for his mother’s funeral. The director (mis)cast Woody as an Indian chief in the later Two Rode Together and as a Mongol warrior in 7 Women, and more sagely as Pompey in The Man Who Shot Liberty Valance. For Strode the abuse he had received on Sergeant Rutledge was all worth it. He said, “You never seen a Negro come off a mountain like John Wayne before.” He also said, “It had dignity. John Ford put classic words in my mouth. … And I did it all myself. I carried the whole black race across the river.” Strode spent time at Ford’s bedside when he was dying.

None of Ford’s later Westerns, including Sergeant Rutledge, was really weak. One, Liberty Valance, was good. Had Ford not made My Darling Clementine, the cavalry trilogy and The Searchers in the post-war period we might remember these later works as outstanding. Maybe they only suffer by comparison. But I have a sneaking suspicion that Ford was churning out pictures because that’s what he did, and he needed the money, and the passion for the Western had departed.

There are many admirers of Sergeant Rutledge. The New York Times said, “This is a good picture—thoughtful, well-acted, biting, interesting and stimulating—with the steady hand of an old pro like Mr. Ford evident every step of the way.” Variety commented that the movie has an “intriguing screenplay which deals frankly, if not too deeply, with racial prejudice.” Ford biographer Scott Eyman said, “Sergeant Rutledge is a film of considerable formal beauty”, and he has a point. Mike Grost has described it as being one of Ford’s best, but also one of his most underrated.

Myself, as you may have divined from my comments, I am not such an admirer, though I think the theme worthy. I am more in line with Brian Garfield’s view, that “Woody Strode’s performance is excellent and Bert Glennon’s photography is fine but the film is not up to the usual Ford-Bellah standard; it’s one of the least of Ford’s Westerns.” But then of course Garfield adds, “Still, that makes it better than nearly anybody else’s.”