Not a dud but not top-drawer Ford either

I’m just going to do two more cavalry Westerns, for the moment anyway. There are so many that they could really have a blog of their own. It was a sub-genre that in many ways went right back to the birth of the oater, at least if we mean Westerns with the cavalry arriving at the last minute to save settlers, that kind of thing. If we mean more specifically Army-centered stories, with officers (and often scouts) as principal characters, we might think those date from perhaps the late 1930s – Paramount’s The Plainsman (1936), for example, has some elements of this. The cavalry Western still survives, in certain forms, though the last really good one that I can think of is probably Ulzana’s Raid in 1972. You may be interested – if so, click this external link – in Nicholas Chennault’s list of nearly a hundred examples – and it’s not exhaustive.

We’ll finish our current thread tomorrow, with a cavalry Western I really like, but today one that, as I say in my subtitle, is not a complete dud, far from it, though neither is it in the front rank of John Ford Westerns: The Horse Soldiers. 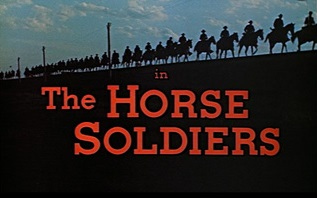 I watched it again yesterday, to refresh my memory. Or more accurately, I watched Soldati a cavallo, the Italian version. I like to watch familiar Westerns in other languages sometimes; it can give a fresh perspective on them. You notice things you didn’t before. Sometimes the dubbed voices are even an improvement on the originals (I’ve seen Arnold Schwarzenegger movies with the superimposed voice so professional it makes it seem as if he can act). The gravel-like habitual German voice of John Wayne, Arnold Marquis, was an essential ingredient to Duke Westerns in Germany and Emilio Cigoli the same in Italy.

The Horse Soldiers, though, the original I mean, was difficult from the start. Producers John Lee Mahin and Martin Rackin also wrote the screenplay and Ford’s reaction to it was to say, “If you think I’m going to photograph that goddam script, you’re mistaken.”

He also told the producer-writers, “You know where we ought to make this picture?”

“Lourdes, because it’s going to take a miracle to pull it off.”

Mahin and Rackin were interesting characters, actually. Writer/producer/actor Mahin (1902 – 1984) was a friend of Ben Hecht and co-wrote the 1932 Scarface with him, before going on to work for Louis B Mayer, first at MGM, the independently. He was one of the preferred writers of Clark Gable and Victor Fleming. He got to know Rackin when they worked on a script of Pearl Buck’s Letter from Peking, which was never filmed, and they collaborated on The Red Skelton Hour. Rackin (1918 – 76) had co-written the rather stodgy Warners Westerns Distant Drums in 1951 and also the uninspired Alan Ladd oater The Big Land, which we shall soon be reviewing. He produced the much better Clint Walker Western Fort Dobbs in 1958. That year too Rackin and Mahin decided to form a production company, Mahin-Rackin Productions. It didn’t last long because Rackin (Damon Runyon’s godson, and a near genius at speaking in non-stop profanities) became head of production at Paramount, but the company did put together The Horse Soldiers for Ford, and, the year after, another Wayne Western, the Henry Hathaway-directed North to Alaska, designed, successfully so, as a money-maker to help with Duke’s huge and close to financially disastrous investment in The Alamo.

But enough of Rackin & Mahin. Back to The Horse Soldiers.

It was a Civil War story, based on Grierson’s Raid (1863), the Battle of Newton’s Station (1863) and the Battle of New Market (1864) – though it departs considerably from the actual events. Union troops go behind Confederate lines during the siege of Vicksburg.

Colonel Marlowe (Wayne) leads the force and Duke gives us his by now habitual gritty cavalry commander act. He stands for no nonsense and barks at his men, though of course beneath the crusty outer shell beats a heart of Jell-O.

Holden is an army surgeon who falls out with the commander. Holden was never less than excellent in Westerns, and he’s good here too.

Thanks to Wayne and Holden, the interaction of the commander and doctor is sparky. The film comes across as a sort of anti-buddy movie. They eventually come to mutual respect, of course. Wayne and Holden both got $750,000 for starring, a record salary at the time. 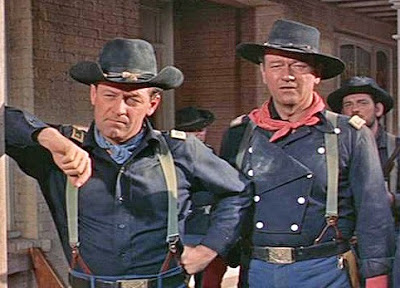 It’s perhaps interesting that apart from his segment of How the West was Won, this was Ford’s only Civil War picture. William Clothier said that he had never in his life met anyone who knew as much as Ford did about the Civil War. He could name all the generals on both sides, he knew all the uniforms and on location he had a box of books about the war bigger than his clothes trunk.

The actual locations used, in Mississippi and Louisiana rather than Lourdes, were unpopular with the grumpy Ford, suffering from bad weather and in the still-segregated South, African-American members of the cast would not even be allowed to share accommodation with white cast members. Casting was problematic. Wayne was preoccupied with setting up his mega-project The Alamo (his wife Pilar, who joined him on the set, said that he broke his usual rule about not drinking during filming) and Holden, fine actor that he was, was a red rag to the bull to Ford. Holden was even fonder of the bottle and either didn’t know or ignored Ford’s rule about no booze on the set. Altogether it was not a happy project.

And whatever feel-good there was on the set was dashed one day when stuntman Fred Kennedy was killed. Kennedy hadn’t worked for some time, after breaking his neck, but Ford kindly hired him for The Horse Soldiers because he needed the pay. It was a relatively simple fall from a horse but it went wrong. Ford was devastated and blamed himself. Scott Eyman, in his fine biography of Ford, says that “there are those who believe that Kennedy’s death drained the last ounce of joy Ford found in the filmmaking process.”

Various members of the Ford stock company accompany Wayne on his raid, including Hank Worden and Ken Curtis, although Victor McLaglen’s role (he died that year) as comic drunken sergeant-major was taken by Judson Pratt. No Ben Johnson or Harry Carey either, sadly. Denver Pyle and Strother Martin, colorful as ever, get bit parts. Good old Russell Simpson is Acting-Sheriff Goodbody.

Veteran screen cowboy Hoot Gibson is a sergeant too, in his last picture. Ford had made silent Westerns with Hoot in the old days and generously gave him the part aged 66.

Former tennis star Althea Gibson played the maid Lukey but her dialogue was originally written in “Negro” dialect that she found offensive. Though Ford was notorious for his intolerance of actors’ demands, he did agree to modify the script.

Constance Towers is southern belle Hannah Hunter who comes across as Marie Antoinette but coarse. Offering Wayne chicken and showing her cleavage, she asks, “What was your preference, the leg or the breast?” Quite daring dialogue for the 1950s. Wayne’s character falls for her (difficult to see why) when she is obliged to accompany them on the raid – this is one of the more improbable parts of the story. Towers would be equally poor in Sergeant Rutledge the year after.

Some of the Ford ingredients are there: pugnacious patriotism, low comedy, cavalry songs, symbolic moments (a white Union soldier dies while a Negro child is born into freedom with the help of the Army doctor), drunken Irish sergeant. In some ways it’s quite formulaic. A reprise.

But there is little of the old Ford magic. There is no Monument Valley and there are no Indians. It is extraordinary how different this rather ordinary (and rather old-fashioned for 1959) Western was compared with The Searchers only three years before. Some would even say it was sad how far Ford had sunk.

The movie is mealy-mouthed about the slave issue, as most Westerns were. Maybe we had to wait till Django Unchained addressed that.

The film is well photographed, as any Ford movie had to be, by William Clothier, who became Ford’s stand-by cameraman and almost assistant director. But Ford himself seemed to have lost interest and it was often Clothier who had the creative input.

The best scene in the picture was not in the rather second-rate script but was improvised by Ford, namely when the boy pupils of a Confederate military academy, led by an elderly parson, march into battle against the Union troops, and a mother (Ford’s old friend Anna Lee) grabs her young drummer-boy son and drags him back home. It was genuinely moving.

The film was a commercial failure; analysts said this was due largely to Wayne’s and Holden’s high salaries, and the complex participation of multiple production companies. That was very possible. As well as John Ford Productions and Mahin-Rackin Productions, there was Wayne’s Batjac, William Holden Productions, the Mirisch Corporation and of course United Artists. Naturally they all wanted their slice, along with all their lawyers, agents and accountants.

The critical reception was lackluster. Variety said that “William Clothier’s photography is outstanding. Some of the scenes have the quality of paintings. As in all of the Ford films, the music has a fitting, masculine quality, being sung mostly by a male chorus.” But it also noted, “But with all of Ford’s skill for staging battle scenes, and his superb eye for pictorial composition, the film is extremely uneven. The long shots of men on horses tend to become tedious and they considerably slow up the flow of the story. Also, the dramatic scenes involving John Wayne, William Holden and newcomer Constance Towers don’t come off with much conviction.”

Bosley Crowther in The New York Times said that the action was “supremely graphic and exciting” and he praised the “really beautiful longs shots of cavalry moving through the woods” but he also said, “The script by John Lee Mahin and Martin Rackin tends to run to ‘horse opera’ clichés.” He summarized it by saying, “Of course, by and large, The Horse Soldiers is for the Western fans and the kids, but Civil War buffs take notice: it comes close, thanks to Mr Ford.” (I’m not quite sure I approve of Crowther’s “for the Western fans and the kids”, but we’ll let that pass.)

Of more recent appreciations, Dennis Schwarz calls it “a quintessential Ford Western” and says, “In Ford’s oeuvre, this film would rate somewhere in the middle. It threw out some diverting ideas, making it greater than your typical Western.” The BFI Companion to the Western also calls it “quintessential Ford” and thinks it’s underrated. Herb Fagen in The Encyclopedia of the Western criticized the unconvincing Wayne/Towers romance and “the occasionally muddled script” but generally likes it: “Though the film falls short of his best work, Ford’s mastery for [sic] military ritual and William Clothier’s stunning picture-postcard photography work extremely well.”

Julien Léonard commented that The Horse Soldiers “demeure avec le temps un petit chef-d’œuvre qu’il serait temps de reconsidérer à sa juste valeur” (it remains as time passes a minor masterpiece that deserves a re-evaluation of its true worth). That may be over-egging it.

Brian Garfield praised the “superb” William Clothier photography but didn’t like the writing: he said “the dialogue is flat and the melodramatic devices are strained”. He summed it up quite accurately, I think, by saying, “It’s vigorous, but far from top-drawer Ford.”

The Horse Soldiers was not a flop, or a bad film, but it was nowhere near the quality of Ford’s previous cavalry Westerns. With the possible (though disputable) exception of The Man Who Shot Liberty Valance, Ford never made a great Western after The Searchers. That’s my view, anyway. You may disagree!