A rather ordinary Western heist movie

The Badlanders was a remake of the 1950 picture The Asphalt Jungle, transposed to the West. I love the original movie, though it be not a Western, and in terms of hard-boiled noir/caper flick it’s hard to beat. It has been oft imitated. Apart from The Badlanders, there was, for example, Cairo (1963), and A Cool Breeze (1972).

Sadly, Alan Ladd was not right for the lead and director Delmer Daves was not on top form. He himself accounted The Badlanders the least of his Westerns and said he only made it as a favor to Ladd (the star of Daves’s earlier oater Drum Beat).

He was right, really. It’s just a routine caper movie, without the spark of the original. Even the color doesn’t quite suit it, somehow. It needed that noirish black & white.

The chief problem with it is not the direction, however, or even the acting. It’s the plodding writing (HUAC victim Richard Collins, using the original WR Burnett novel). The different strands of the narrative remain unintegrated, as it were. It is bitty and messy. Nothing surprising happens and the few attempts at laughs are flops. “Unless you want to see your own gravestone on your way to hell, you’ll be on the next stage. Now that leaves here tomorrow at sundown.” That’s about as near to “There’s a stage leaving at noon. Be on it” as you can get without being laughed out of town.Still, Daves was certainly a noted Western director and the movie had a couple of big stars to accompany Ladd: Ernest Borgnine (returning from Daves’s Jubal) and the great Katy Jurado, probably best remembered, at least by Western fans, for High Noon.

Otherwise, though, the cast consisted of lower-key character actors, some good, sure. Anthony Caruso was in both The Badlanders and The Asphalt Jungle. He is the horrid leader of the town’s thugs, Comanche. We got regulars such as Kent Smith and Robert Emhardt.

It’s a mining story. Dutchman Peter van Hoek (Ladd) is a mining engineer who wants to rob his former employers who have jumped his claim. Tough Borgnine is the Yuma cellmate he recruits to help him. The American penal system is scathingly depicted in the opening scenes.

Poor Alan Ladd liked Westerns, and set up Jaguar Productions to make them after his mega success in Shane, but to be brutally frank he was never really suited to the genre. Even in Shane he was fine at the bits where he gently built relationships but as hard-bitten fist-fightin’ gunslinger he just didn’t convince at all.

Actually, even if Ladd could cut it as a tough Western action-man he wouldn’t be much good in this story, because he has no opportunity in the script to develop relationships or do well at the human side. He is given a token love interest (Claire Kelly, no other Westerns) but he was never good at physical romance scenes either and his relationships remain shallow. It’s Borgnine who gets to have the passionate rapport. Daves was really interested in the interracial romance (Broken Arrow, White Feather). Ernest’s amour is the truly wonderful Katy Jurado, shortly to become his wife in real life too (though it did not last). She is, as she always was, splendid.

It is, though, perhaps fair to say that Ladd’s quiet ‘emotional strength’ if we want to call it that does contrast well with Borgnine’s bombast. 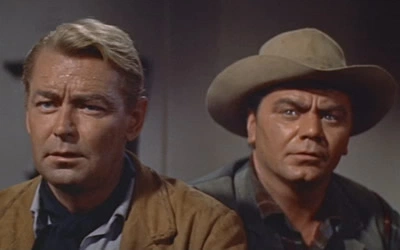 In Daves’s Westerns peace officers were either entirely absent, leaving frontiersmen to make their own law, or, when they do appear, they are brutal or corrupt. Sheriff Harper in The Last Wagon is a good example: he was perfectly foul. Daves didn’t care for sheriffs and marshals. In The Badlanders, both the marshal (Karl Swenson, bit parts in every TV Western you care to name) and the hired-gun deputy (standard TV Western heavy Adam Williams) are venal and slimy. They are like Barry Kelley and Brad Dexter in the original, nasty bits of work.

The best bits are set in the Mexican community of the town (Prescott, AZ) where the suggestion is that the people are brought illegally over the border to slave away in the mines (gold mines and gold towns are usually the setting for greed and corruption in Westerns, as Daves’s next Western would show) just as the chief badman Lounsberry (Kent Smith, TV Western stalwart, the Secretary at War in A Distant Trumpet) in the Louis Calhern part (but Calhern was wonderfully good) brings over rustled Mexican cattle. The implication is that the Mexican laborers are mere cattle. In this ghetto young mothers are forced to give birth without doctors. The final scene where Katy rouses her fellow Mexicans to resist the corrupt and brutal white men is splendid, and in fact saves the film from oblivion. And the poor people are in the process of celebrating their fiesta so are conveniently in very Mexican costumes and, better still, in this fiesta there is a re-creation of the siege of the Alamo, so they get their version of those events after all these years!

And it’s really refreshing to see the bad guys (well, semi-bad guys) get away with it. Fourteen years before The Getaway (bless you, o sainted Peckinpah), the robbers, leaving a dead deputy in the villain’s library, escape over the border to Mexico with the loot. Hooray! (Hope that wasn’t a spoiler. I guess it was, really).

The picture was produced by Aaron Rosenberg as part of his deal with MGM. He first said William Holden would lead, then James Cagney and Paul Newman were talked about before Ladd came in.Still, all in all, I’m afraid The Badlanders is not all that good. Worse Westerns have certainly been made and this one is definitely worth at least one watch. It is Delmer Daves after all.

It does benefit from some nice photography (John F Seitz again) of Yuma and Old Tucson locations in Arizona , with three weeks’ location work in Kingman, Arizona. Daves was always good at that side of it. But much is also done back at MGM somewhere behind the studios in California, and visually too, this is the least of Daves’s Westerns. The (uncredited and recycled) music is also forgettable.

Variety called it “a truly original frontier drama” but that’s just it, really. Its very remake status denied it originality, however good (or not) it may have been.

The New York Times said, “The action is smooth and rewards are liberal.” Not quite sure what that means.

But it hasn’t lasted well.

Myself, I put it just above Drum Beat in quality but it’s definitely one of the weaker Daves Westerns. 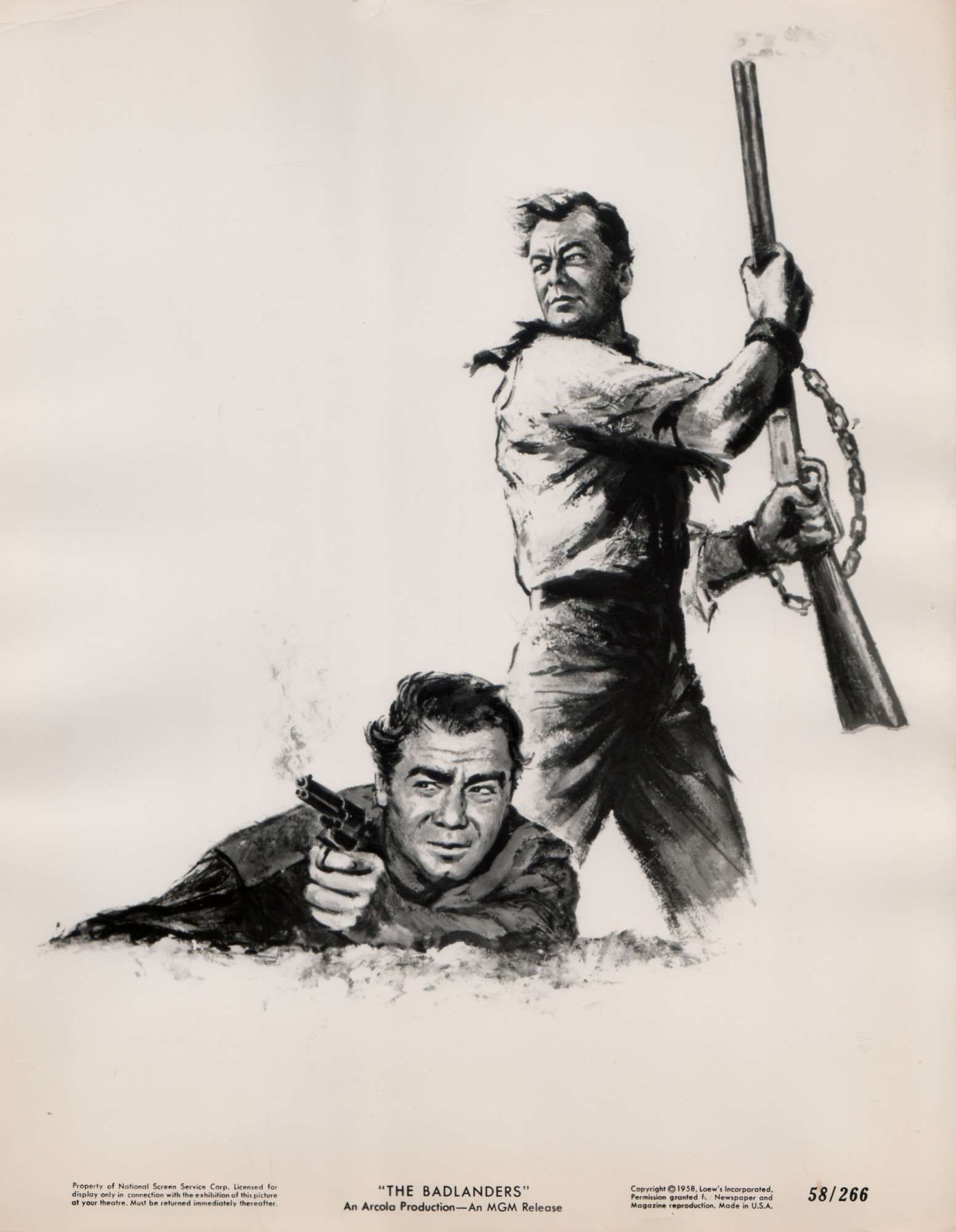