The Hanging Tree was Delmer Daves’s last Western as director. In fact he only directed it between June 17 and July 28, 1958, falling ill while on the set, and star Gary Cooper, whose new company Baroda Productions this project led, asked one of the actors, Karl Malden, to finish the direction, which he seems to have done competently. But it was certainly a ‘Daves’ Western, featuring many of the themes and motifs that distinguished his pictures. And, like some of Daves’s other ones, it was very good.

So we’ll finish our survey of Daves Westerns with a look at it. It was also Gary Cooper’s last, unless you count They Came to Cordura, which you could, though perhaps it’s more of a war film than a Western in some ways. The Hanging Tree was released in February ’59 and Cordura in November. Like Daves, Coop was not well. His health had at last given way. His years of stunting finally took their toll. He suffered hernias, ulcers and severe back trouble. In 1959 he was diagnosed with cancer. He made his last films in considerable pain, yet while he resorted as much as possible to his double, Slim Talbot, he still did quite a few of the action scenes himself. He was in especial agony when he had to ride a horse.

Cooper himself said just before he died, “Nothing I’ve done lately, the past eight years or so [he meant after High Noon], has been especially worthwhile. I’ve been coasting along. Some of the pictures I’ve made recently I’m genuinely sorry about. Either I did a sloppy job in them, or the story wasn’t right.”

He was certainly being too harsh on himself. Yes, he had done some weakish Westerns in the 1950s, such as Springfield Rifle, Vera Cruz and Friendly Persuasion (a semi-Western). But even in those he himself was never “sloppy”; he always lifted mediocre movies. And he had also done some very good ones, notably Garden of Evil with Henry Hathaway (1954) and the powerful Man of the West with Anthony Mann (1958). In any case, The Hanging Tree was as good as anything he had done in the 50s with the exception of High Noon.

It was written by Wendell Mayes and Halsted Welles, from a Dorothy Johnson novella – Johnson of course also wrote A Man Called Horse and The Man Who Shot Liberty Valance. The Hanging Tree won her the Western Writers of America Spur Award. Billy Wilder had hired Mayes in ’57 to work on the script of The Spirit of St Louis and Mayes also did three outstanding scripts for Otto Preminger, but they are not Westerns so we can’t talk about those now. Halsted Welles had adapted Elmore Leonard’s short story for the screenplay of 3:10 to Yuma for Daves, in ’57. Quality writing all round, then, and it shows, in the subtlety of the characterization and the tension of the plot.

Thanks to Johnson, Mayes and Welles, the character Cooper plays, Dr Joseph Frail, is a much more complex personality than Coop’s previous Western figures, even Will Kane. He is at once a caring, thoughtful physician and a cold, rebuffing and almost sadistic man. He drinks, smokes and gambles, ruthlessly accumulating wealth, and totes a .45 with aplomb. Cooper captures this wonderfully well, as always, ‘underacting’, transmitting so many emotions with the face, especially the eyes, suggesting mystery, a painful past and intelligence. It is a breathtakingly good performance. 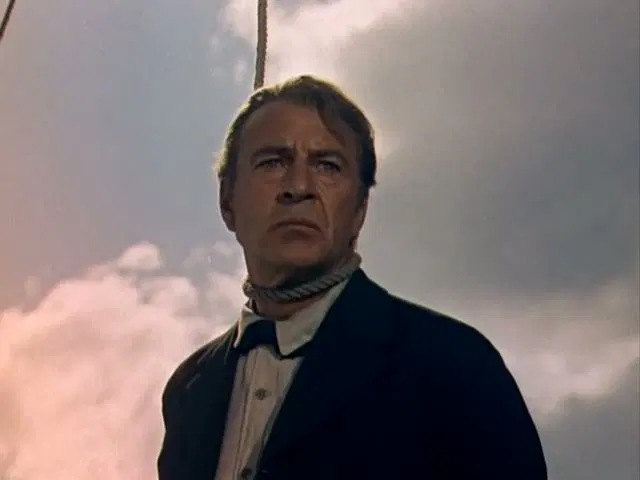 The story is a curious one. Set in the aptly-named Skull Creek, a Montana gold camp in 1873 (a wonderful creation, all praise to art direction by Daniel B Cathcart, who also did The Law and Jake Wade and The Badlanders; I think the camp in Ride the High Country was modeled on it), it has Dr Frail, a name he has chosen as it “suits a man with frail hope”, ride into town at the start – that was a trademark in Gary Cooper Westerns – and set up business in a cliff-top cabin. As he passes the ominous tree which dominates the town, center of the lynch mob rule that runs the place, a man comments, “Every new mining town’s got to have its hanging tree. Makes folks feel respectable.” It’s pure Daves. It echoes Clark Gable’s wry comment on seeing a hanged man in The Tall Men a couple of years earlier: “Looks like we’re getting close to civilization.” We also think of the early scene in Anthony Mann’s Bend of the River when James Stewart saves Arthur Kennedy from the noose, and The Ox-Bow Incident, and a whole host of other Westerns. They just loved to hang people, preferably without too much concern as to whether the victim was actually guilty of anything. I loathe lynching on screen or anywhere else. Delmer Daves did too. And Henry Fonda. All humane beings – but sadly not all human beings.Frail immediately establishes himself as a kind and caring physician, treating the child of a poor family free and even lending them his milk cow to nourish the little girl.

Yet when he saves a sluice robber from certain death on the town’s lynching tree (a tree, by the way, which is eerily reminiscent of the one in the excellent Budd Boetticher/Randolph Scott Western of the same year, Ride Lonesome) and treats the young man’s gunshot wound, we see another side to the Doc. He exploits the boy, forcing him to become his “bondservant”, almost a slave, and there is even something slightly creepy about the relationship. The boy is called simply Rune; this puzzling name may be either first name or last name or neither. His soft, almost feminine looks hint at something nearly corrupt. Rune is played by Ben Piazza, his first big role. Piazza was really a tragic figure who died of AIDS in 1991, survived by his companion. He is really quite excellent in this picture and we see how he gradually changes from anger and resentment to loyalty and affection. At one point he says of himself that he is there because he has nowhere else to go; that is certainly true – he has for the first time found a home and a point in life, assisting the doctor.

The arrival of a woman in the camp is what causes all the trouble. She is a Swiss lady, only survivor of a stage hold-up and crash (superbly and impressionistically staged by Daves), who is burned and blinded by the sun and whom Dr Frail tends and cures. While some of the rough camp men are respectful and decent, others, notably Frenchy Plante (Malden) are not. Plante is indeed a loathsome character, sly, lustful and cowardly. But here is a basic weakness of the film: while the character of Plante is a great one, Malden ruins it. He was never good in a Western and came close to ruining any number of movies. Maybe he was alright in crime dramas but in our noble genre, no. He is incapable of speaking in this picture but only shouts. His bulbous nose and stupid hat make him seem just ridiculous, clownish. His worst, most scenery-chewing performance was probably as the Army officer in Cheyenne Autumn but he also did his utmost to sink One-Eyed Jacks (which wasn’t actually that hard to sink) and Nevada Smith. The only Western he was half decent in was as the saloon barman in The Gunfighter – and even there…

The woman, though, is played by Maria Schell and very well indeed. I especially admire the convincing way she coped with the gradual return of her character’s sight. She has the right blend of grace and toughness and really does an excellent job. It is completely plausible when the doctor’s tenderness and her gratitude blossom into genuine love. It was her first Western of only three (she was also good in the Anthony Mann version of Cimarron in 1960) and it is a pity she didn’t do more.

Another impressive aspect of the tale is the way that malicious tongues wag as the woman patient is tended by the doctor. Virginia Gregg as the wonderfully-named Edna Flaunce is superb (the characters’ names have an almost Mervyn Peake tinge to them). I also loved the young George C Scott as the poisonous preacher Grubb, furious that a real doc was taking away his lucrative trade as crooked faith healer. Daves was as anti-clerical as he was anti-lawmen and his preachers and sheriffs, when they appear at all, are corrupt or vicious or both. Grubb has a great line, “I hear tell she’s a foreigner. Is she loose virtued?” He really is a repellent creature. It’s a great performance by Scott.

John Dierkes is also very good as the bearded gambler Society Red, and when the bacchanalian mob run riot after a big strike and a bonfire gets out of hand and burns the camp, there is even a hint (as far as 1959 mores would allow) of homosexual rape as Red and a couple of cronies trap Rune in the cabin and seem to have their way with him. Daves often played with homoeroticism, on a sublimated level, in this case done in a dark and exceedingly unpleasant way.

The writing and, with the exception of Malden, acting, is really first class.

The Max Steiner music is strong but there is the inevitable (and inevitably ghastly) ballad crooned over the opening titles by Marty Robbins. Oscar-nominated, would you believe; it didn’t win, at least. No 50s Western was complete without an excruciatingly warbled ballad. Of course Tarantino’s still doing it, but that’s as a knowing joke. The worst part of this is at the end when the moving last scene is ruined by this trite ditty.

It’s supposed to be Montana, Coop’s home, but the locations were in the Oak Creek Wildlife Area in the mountains west of Yakima, Washington – very nice, and beautifully photographed by Ted McCord (The Treasure of the Sierra Madre, Giant). Visually, this is a superb picture. I am told that McCord “made use of full-aperture photography and reduction printing to improve the grain quality of the film.”

The picture was produced by former talent agents Martin Jurow (Breakfast at Tiffany’s and The Pink Panther but this was his only Western) and Richard Shepherd (no other Westerns).

The New York Times liked the acting but was not full of praise otherwise: “Wendell Mayes and Halsted Welles have not drawn a script of major meaning from Dorothy M. Johnson’s long short story The Hanging Tree. There is no particular theme or moral to it, except that bread cast on the waters will be returned.” The review added, “The story is absorbing to the end. It keeps you wondering and wishing—finally wishing it were a little better, that’s all.” I can’t agree with that.

Variety, however, thought it one of Gary Cooper’s best roles and said, “There are fine performances from a good cast, but the main contribution comes from the director. The natural splendor of the Washington location is thoroughly exploited in Technicolor, but Delmer Daves doesn’t allow his characters to get lost in the forest or mountains.”

The picture seems to have done well at the box office. Film Bulletin drew a parallel between the gold Schell and Piazza discover and the profits of the film.

The BFI Companion to the Western awards the picture high praise, saying, “This is Daves’ most complex and ambitious film and certainly his finest Western.” It adds, “It is a brooding, romantic, opaque work of great dramatic intensity and breathtaking visual beauty.”

The Rough Guide to Westerns says the film “makes stunning dramatic use of space” and that it “anticipates the amoral West of Leone.” Not sure about that last part.

I really would recommend you to have another look at The Hanging Tree. It is very fine. 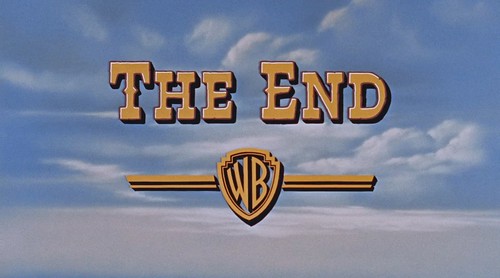 Well, that’s where we’ll leave Delmer. I’d like to move on to the Westerns of another director whose career was in some ways strikingly similar. But that’ll be for next time!