In 1953 audiences were treated to Part 3 of the Anthony Mann/James Stewart Western cycle, and The Naked Spur was so powerful that it could hold its head high in a year of stunningly good Westerns, pictures such as Shane and Hondo. 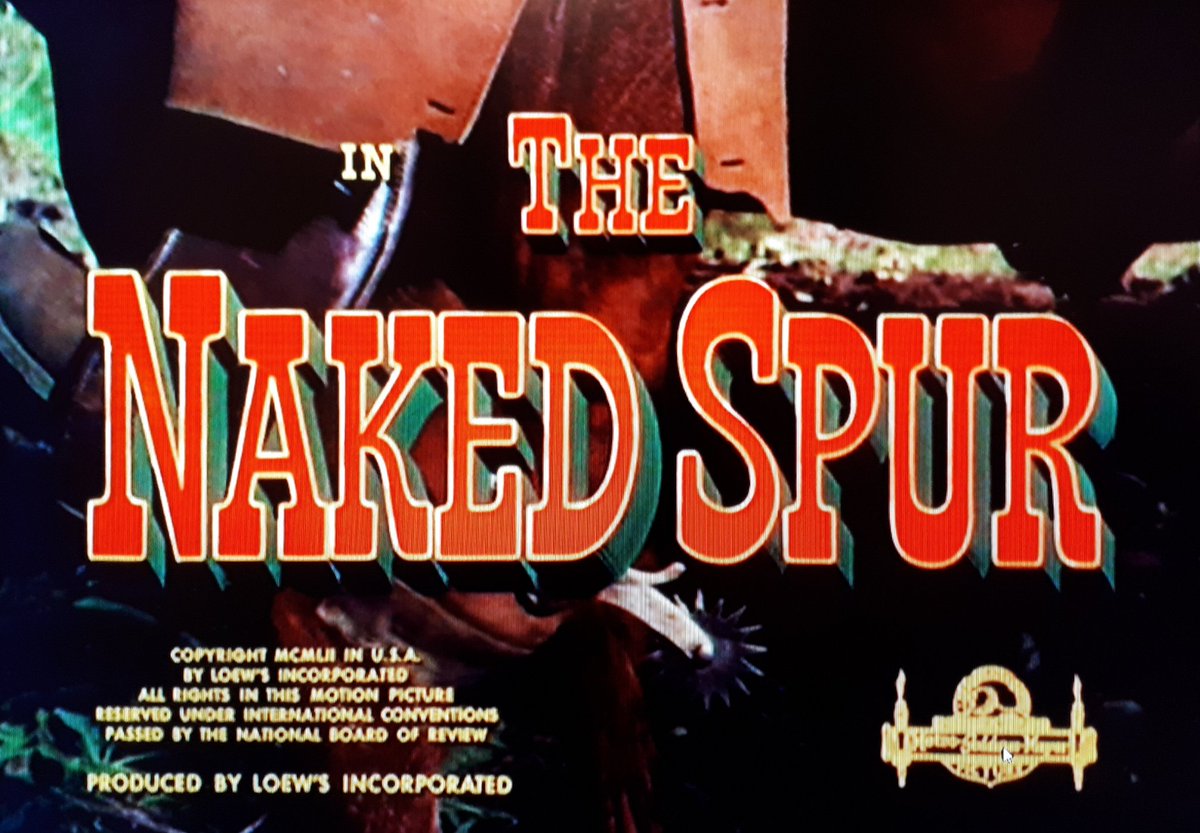 Shane and Hondo had something in common: a stranger comes out of nowhere and uses his gunman’s skills to aid farmers. The Naked Spur is very different. It is much more like Winchester ’73 or Randolph Scott in Ride Lonesome: it is the story of a man grimly bent on hunting down a villain for very personal reasons. In this case, Howard Kemp (Stewart) is seeking the bounty on badman Ben Vandergroat (Robert Ryan) who has killed the marshal in Abilene. Kemp is not a professional lawman, but a citizen on a mission because he needs the money (like Van Heflin in 3:10 to Yuma) and because he knows it’s his duty (like Fred MacMurray in At Gunpoint), but, unlike these, mostly out of sheer rage. Once again, as in Winchester, Stewart plays the driven, manic man with a mission, and once again, as in Bend of the River, we are in the dangerous, awe-full mountainous settings beloved of Anthony Mann, jagged, hostile locations which heighten the drama and provide a violent backdrop for the action.

It must be said that Mann and cinematographer William Mellor made the most of the Durango and San Juan Mountains locations. The film, shot in May/June 1952, is a visual feast. And for once I don’t think there were any interiors, that I can remember anyway – unless you count the cave, the only moment when Stewart’s character softens a little, and the lighting is accordingly soft. The exterior settings make the action colder, harder, more savage.

In this vast wilderness we have a very small cast. There are the driven hunter Kemp (Stewart) and his prey Vandergroat, the outstanding Robert Ryan. We have Ryan’s girl, Lina, played by Janet Leigh, very good indeed, who forms a point of the love triangle that is almost inevitably created – echoes of Bend in the River here, where Julia Adams filled this role with Stewart and Arthur Kennedy. In the first of the series, Winchester ’73, the woman (Shelley Winters) had hardly figured at all.

We also have a dubious Union Lieutenant Anderson (Ralph Meeker) who has been discharged as “morally unstable” (whatever that means).

And lastly we have a grizzled old miner Jesse Tate (Millard Mitchell, Stewart’s sidekick in Winchester ’73, in one of his last roles – he died soon after of lung cancer) whom Stewart inveigles into helping him track down the fugitive. It’s an intimate, intense, stage play-like ensemble in a huge, wild open-air theater.

Stewart was at his passionate best. He is nastier here than in any of the other Anthony Mann Westerns, more sullen too, but just as much a man with a vengeful, borderline-psychotic mission as he is in Winchester or would be later in The Man from Laramie, or indeed even more so. This time he is an embittered ex-soldier who lost his ranch when he went away to fight the war, signing the deed to his property over to his woman. When he came back from the fighting she had sold the place and run off with another man. Now he wants to buy it back, and the only way he can raise the money is to collect that reward on Vandergroat. Stewart handles the psychological warfare that Mann and the superb screenplay provide with a steely malevolence that puts him on the very outer edge of the good-guy role. 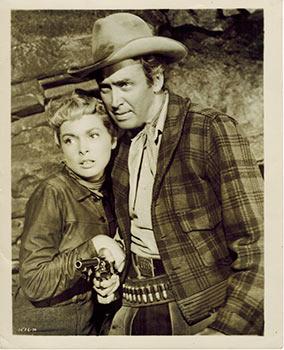 The script was by Sam Rolfe and Harold Jack Bloom. Rolfe was principally known as a TV writer and only did two feature Westerns, this one and Pillars of the Sky. Bloom would later write The Yellow Tomahawk and the interesting A Gunfight. In both cases, The Naked Spur was their best work. The picture was nominated for an Academy Award for Best Original Screenplay—a rare honor for a Western, as you know.

Robert Ryan (who would work again with Mann, in non-Westerns) had power and subtlety. Like all great Western actors, he was tough and thoroughly convincing as a Westerner, good or bad (often bad in Ryan’s case). He carries off brilliantly the murderous cut-throat with charm and intelligence that often figured in these Mann Westerns (Duryea in Winchester, Kennedy in Bend). He is relaxed while Stewart is mentally tortured. He is profoundly evil but he is perhaps the most fascinating of Mann’s villains.

Janet Leigh certainly wasn’t known as a Western actress, far from it, but here she manages to be more than the additional love-interest afterthought that women could sometimes be in Mann Westerns. She is tomboyish yet seductive, and it is entirely credible that strong men would fight over her. Tough/voluptuous is a hard act to carry off but she does it.

Millard Mitchell’s two Westerns The Gunfighter and Winchester ’73 established him as solid, dependable and strong in support. He is dependable and strong here too as the tough old Colorado miner who joins Kemp, thinking he is a sheriff, then when he is disabused of that notion (by the villain) he too becomes driven by the desire to bring the man in and claim his share of the reward.

Ralph Meeker, pre-Mike Hammer, is the weakest of the party, I think, as the Union soldier who has the Indians after him (he raped one of their women). He isn’t a bad actor, it’s not that. It’s just that beside the very powerful performances of the others, he pales a little. But even for his character we have some sympathy; at least he’s not seriously bad like Ryan.

I like the way the advantage shifts one way and the other in a dangerous arithmetic depending on who will get the money and who outnumbers whom. It reminded me of the Raoul Walsh-directed Along the Great Divide (1951) in that way. Apart from the Indian raiding party, there are only these five characters, yet the possible combinations shift and change, in an intense, introspective ballet. And the way that Ryan plays on the corrupting greed of the party – “Money splits up better two ways instead of three,” he smiles – reminds me (as it has reminded other viewers) of The Treasure of the Sierra Madre. But then again it touches a real chord: we all at some point want the chance to start life over again after failure.The film was violent for the time – though quite tame nowadays. You have to watch it with that in mind. Still, even though it is relatively mild for us now, it can still shock and be brutal. Mann believed that violence was important in his films and didn’t hold back on it. I especially liked the way the group is suddenly plunged into violence as the Indians attack, and just as quickly the party is left bewildered, as we the viewers are, as the Indians disappear.

Mann also did dazzling endings and The Naked Spur doesn’t disappoint in this regard either. We had the rifle shoot-out in the Arizona rocks in Winchester ’73 and the gunshots echoing in the mountain valleys in Bend of the River. Here we have freezing torrents, waterfalls and jagged rocks in a gripping finale. It’s really well done.

Gun buffs will rear and shy. The story is set in 1868 yet they are using 1870s and 1880s Colts and Winchesters. It doesn’t worry me, I must say, but there are a lot of trainspotters out there…

The naked spur shown at the start and which Stewart uses to climb the barren rocks (the naked spurs) and which he finally tosses into Ryan’s face (like Barbara Stanwyck and her scissors in The Furies) is an excellent symbol of the sharp, dangerous and painful journey he travels. Mann’s titles often had significance of this kind.

According to MGM records, on its budget of $1.26m the picture earned $2.4m in the US and Canada and $1.42m overseas, resulting in a profit to the studio of a million bucks. Pretty good.

From its great eminence, The New York Times loftily pronounced, “As the Western is a staple product that too often emerges as a banal treatment of standard situations and dialogue, it is a pleasure to report that The Naked Spur, a specimen of that genre that arrived at Loew’s State yesterday, is as refreshingly tough and taut as they come.” Reviewer ‘AW’ added, “The Naked Spur, in short, has hewed to the old-fashioned concept that motion pictures should move. It does so in a thoroughly adult, convincing and entertaining style.”

Variety liked it: “This is a taut outdoor melodrama made to order for the western action addict who likes rugged dramatics delivered without dilution. Film has been tersely produced with no waste motion in getting the violence of the original screen story on film.”

As with all Mann Westerns, the reputation has only grown since then. Empire describes the movie as “a masterpiece that’s too easy to take for granted” and “the best of an outstanding run of Westerns”. Film critic/historian Leonard Maltin has lauded The Naked Spur as “one of the best westerns ever made”. Dennis Schwartz calls it a “wonderfully intense psychological Western.” Herb Fagen in The Encyclopedia of the Western reckons that both Stewart and Ryan deserved an Oscar for it. Jeanine Basinger calls the picture “a masterful achievement” and says, “It is one of the most mature and intelligent films ever made.” And so on.

The Naked Spur really is a stunningly good film. There are those who say it is

Next time, The Far Country, in some ways a Bend of the River 2.

PrevPreviousBend of the River (Universal, 1952)
NextThe Far Country (Universal, 1954)Next
Jeff Arnold © 2022 – All rights reserved – Designed by BetterCallChris
Scroll Up