The Far Country was the fourth Anthony Mann/James Stewart Western, and back at Universal – The Naked Spur having been made at MGM. Mann and Stewart took a pause from their Westerns because at Universal they made Thunder Bay and The Glenn Miller Story, but then it was back to the oater. In fact The Far Country resembled the earlier Universal picture Bend of the River more than it did The Naked Spur. It’s even a kind of Bend of the River 2, in the sense that it too is set up in the cold north, Aaron Rosenberg was producing again, William Daniels was once more at the camera, and some of the cast from Bend was back (Jay C Flippen, Harry Morgan, Chubby Johnson, etc). Furthermore, Borden Chase returned to do the screenplay. 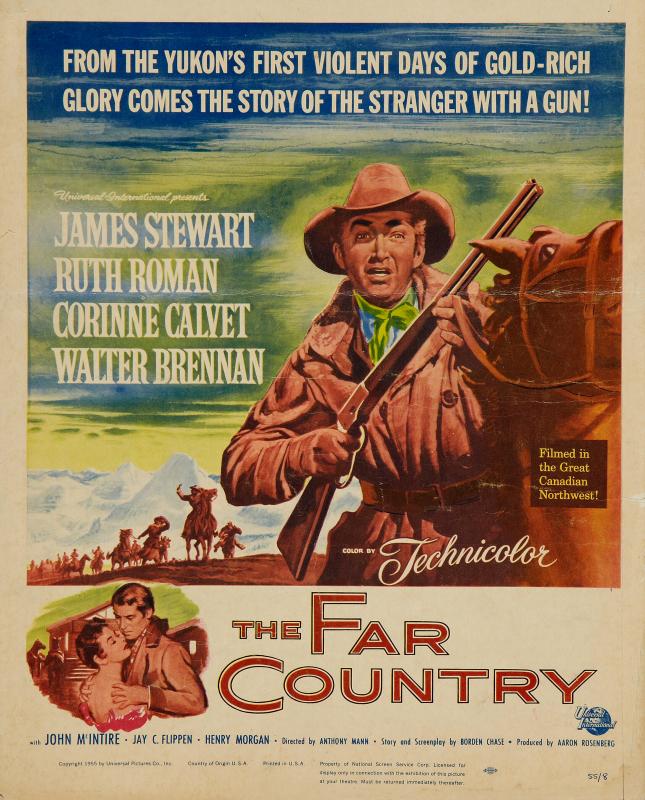 This screenplay was supposedly based, at least in part, on the 1942 Ernest Haycox novel Alder Gulch, but Universal gave no credit to that effect and indeed, I am reading Alder Gulch at the moment and so far can see very little similarity. Maybe later in the book.

I say the cold north; it was indeed very north – so much so, in fact, that a lot of it is set in Canada. Hollywood had a penchant for having its Western stars ride over the border into Her Majesty’s domains. We think of Alan Ladd in Saskatchewan or Robert Ryan in The Canadians. Some of them, like Tyrone Power in Pony Soldier or Gary Cooper in North West Mounted Police, couldn’t even be bothered to do any filming up there, or their producers/directors couldn’t, preferring California or Arizona as ‘Canadian’ locations. Reader ‘G’, who may just possibly be Canadian, wrote to me, “Marshals and cowboy gunfighters? That was America’s history of the old West. It’s rather insulting for Canadians to see that crazy depiction of the Yukon. The Mounties were in the Yukon in large numbers before and during the Klondike gold rush and strictly enforced the law – no gunfighters or gunfights.” Oh well, that’s Western movies for you. In The Far Country the Canadian citizens elect a marshal with a tin star…

So it’s a ‘cold’ Western, not a desert/saguaro one, and has plenty of the fine mountain scenery that Mann loved, and which he thought suitable backdrop for tough tales about hard men.

Stewart is back, with same hat and same horse (this time Pie features a little bell on the saddle-horn and at one point in the script Stewart calls him by name, so the nag even gets a name check).

Stewart is guiding again, as in Bend, but this time for posh Ruth Roman. He’s a misanthropic loner, a self-reliant egoist aiming to make enough money for a ranch in Utah – or at least that’s what his partner Walter Brennan keeps on about. Stewart doesn’t join in the enthusiasm. Of course he has a ‘past’. We aren’t told what it was but at one point when Ms Roman says, “I trusted a man once”, he replies, “Quite a coincidence. I trusted a woman.” At any rate, now he is unwilling to relate the details. He stands off; he lives permanently in the far country. Mann’s titles often had an inner meaning of this kind.

Yep, Walter Brennan is his sidekick this time. He had rather taken out a patent on that role. Here he sidekicks Stewart as he did John Wayne several times (Red River, Rio Bravo, and so on). Where Millard Mitchell as sidekick in Winchester ‘73 was quiet and competent, here Brennan is gabby and foolish. This gives a lighter tone to this movie than the others have. There are more attempts at humor in the script. “Alaska is most difficult for the medical profession,” the doctor tells Stewart. “Then why did you come here?” The doc answers, “Because I’m going to Vienna”. This almost absurdist dialogue does raise a wry smile among us, if not a chuckle. Still, such humor as we find is a cold, frosty one with an undercurrent of menace. It is Mann after all. But Walter Brennan was a deceptively fine actor, as Howard Hawks well knew.

The best member of the cast, though, in my opinion, is John McIntire, and he is the master of this hard humor. Lead baddy, he is the vicious, smiling, sadistic mayor-cum-hanging-judge Gannon, boss of Skagway, on Judge Roy Bean lines. “I’m gonna like you,” he smiles to Stewart. “I’m gonna hang you but I’m gonna like you.” His silk hat was a costuming master-stroke: it gives faux-respectability to a corrupt, grasping and murderous non-gentleman. Reviewer ‘AW’ in The New York Times agreed: “Credit John McIntire with the top characterization as the silk-hatted, bearded bad man, who is as cheerful about killing as he is about drinking and claim-jumping.” Like Dan Duryea in Winchester, Arthur Kennedy in Bend and Robert Ryan in Spur, McIntire is charming as well as deadly, and intelligent too. It’s a wonderful portrayal. John McIntire was always very good in Westerns. He elevated mediocre ones and made good ones (like The Far Country) even better.

His character is certainly based on the real-life Soapy Smith, con-man and gangster, who ruled the roost in Skagway in the late 1890s. Smith opened up a saloon, which became known as “the real city hall”, had the local law on his payroll and pretty well had the town treed. But he was shot to death in a gunfight on Juneau Wharf July 8, 1898.

Robert J Wilke, bulky badman from every TV show you can name from The Lone Ranger to Lassie and countless big-screen Westerns too, is McIntire’s two-gunned, sneering henchman. And the wonderful Jack Elam makes an appearance as deputy. He even lasts till the final reel (he was known as One-Reel Jack for his propensity for being shot to death in the early part of Western films).

Corinne Calvet is rather hokey for me as the freckly French-Canadian tomboy in a woolen hat for whom Stewart is supposed, ludicrously, to fall. But Ruth Roman is beautiful, Ava Gardner-classy. Corinne doesn’t stand a chance – until Ruth walks into a gunfight. There are also three splendid elderly saloon ‘gals’ who sing to the new piano. It’s worth buying the DVD just for them.

The movie was beautifully shot in Technicolor, like Bend, much of it on the Columbia ice fields and in the Jasper National Park in Alberta. Mann was getting the taste for rugged scenery as backdrop for rugged stories. Landscapes and natural features, especially dramatic and inhospitable ones, were becoming one of his trademarks. However, there are more artificial settings and use of sound stages in The Far Country than there were before. Many more, in fact, almost extremely so, and one wonders why. There are even examples of painted backdrops and back projection. Nearly all of The Naked Spur was shot on location and is natural; there are many more studio shots in this one. It seems more a classic 50s Western because of that, but perhaps slightly less Mannish.

The very good music was by an uncredited Henry Mancini, among others. It’s 1896 (but the look is 1870s – as always). It looks like the same stern wheeler steamer as in Bend of the River.

Stewart trained Pie to walk down the street alone, the little bell ringing, for a key scene. He called the horse “one of the best co-stars I ever had.” The sorrel appeared in 17 Westerns, and Stewart developed a close relationship with him. Pie would often “act for the cameras when they were rolling. He was a ham of a horse,” said Stewart. Mann said, “I swear the horse looks back at him and smiles.” When Pie died in 1970, Stewart arranged to have the horse buried at his California ranch.

At one point, Stewart, injured in the hand, holds his Winchester across it with his left hand. I think he was practicing for The Man from Laramie.

Selfish, even ruthless, Jimmy is out for himself and refuses to help the persecuted miners (compare and contrast his helping the farmers in Bend). There’s an interesting relationship with McIntire: you get the feeling that the Stewart character more than half admires his bullying ways. They are two scoundrels trying to out-fox each other. Mann liked villains who were mirror-images of his heroes.

Of course we know that finally, but only at the end of the tale, Jimmy will see the error of his ways and show solidarity with the community by facing down McIntire and settling down with the gal, forgetting dreams of Utah ranches. But this in fact makes him the blandest of the Anthony Mann heroes. We were kinda getting used to the manic, borderline-psychotic man with a mission. That man would be back.

The final shoot-out doesn’t have the epic grandeur of the fight in the rocks of Winchester ’73 or The Naked Spur, and looks forward instead to the one in Man of the West. It is unballetic, even sordid, with the antagonists crawling around in the freezing mud. It was probably the inspiration for the one in McCabe & Mrs Miller.

Oddly, the picture was released in London in July 1954 but not in the US till February 1955. Variety liked it: “Rugged action is featured in The Far Country to go with its rugged outdoor scenery, and the results add up to film entertainment.” The New York Times was slightly less enthusiastic, calling it “a fairly standard adventure of man against ill-natured men and raw nature.” The picture did decently, if unspectacularly, at the box office, making $2.5m.

Still, The Far Country is another very good Mann/Stewart Western, maybe not quite in the Man from Laramie class, or as good as Winchester ’73 or The Naked Spur, but very entertaining and at least the equal of Bend of the River – which is saying a lot. I watched it again last night, just for you, so that I could review it while it was still vivid in my mind. You see the sacrifices I make for you, dear reader? Forced to watch a Mann/Stewart Western when I had so many other better things to do, like…, er, well… 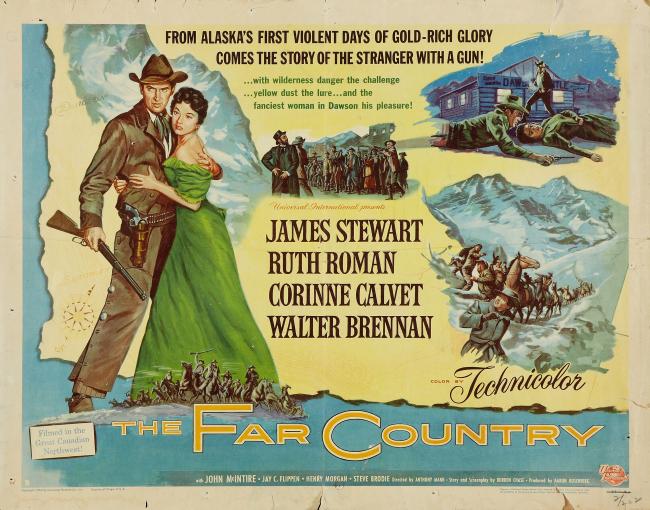