There were some wonderful photographers of the old West, dating right back to the birth of the art, or science as it was really in the early days. One thinks particularly of Mathew Brady (1822 – 1896) who took those fine portraits of eminent Americans like Abraham Lincoln, John Quincy Adams, Andrew Jackson and James Fenimore Cooper, and who, with his powerful Civil War photographs, was a pioneer of photojournalism. Other luminaries (literally, for they painted with light) were the likes of William Henry Jackson (1843–1942), the first to photograph inside what is now Yellowstone National Park, Edward Sheriff Curtis (1868-1952), best known for his many images of Native Americans, and Timothy H O’Sullivan (1840?-1882), known for his fine photographs of the American West. There were many others.

Some even occasionally appeared in Western movies. I remember Elisha Cook Jr as an apprentice of Brady who features in The Indian Fighter (1955).

Another photographer to be photographed in a Western, played by Jonathan Ward in Geronimo: An American Legend (1993), was perhaps the most famous of them all, CS Fly.

Camillus Sydney Fly (1849 – 1901), known as Buck, was the photographer whose studio overlooked the OK Corral in Tombstone, AZ and who thus had a ringside seat for the most famed Western gunfight of them all, on Wednesday, October 26, 1881. 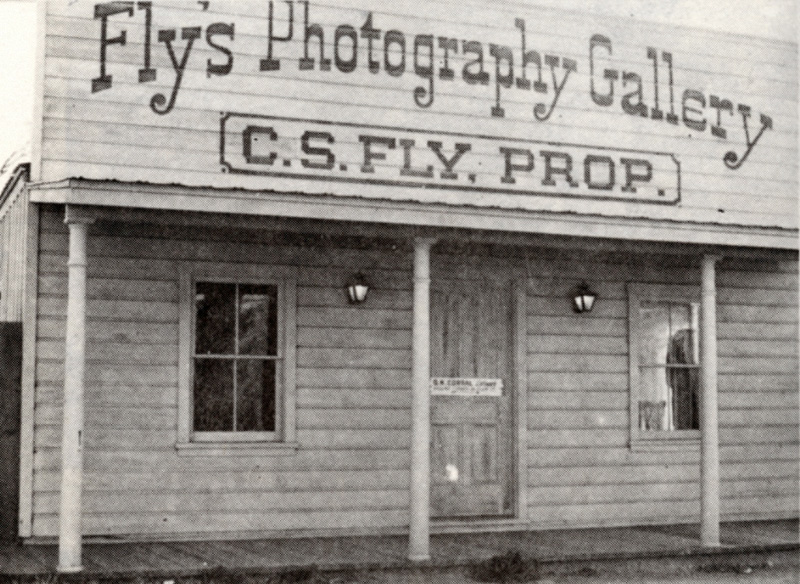 His was a most interesting life. He was born in Andrew County, Missouri but shortly afterwards his family migrated to California, eventually settling in Napa County. Grown, Camillus became a farmer, but was always fascinated by photography and in September 1879, he married divorcée Mary (née McKie) Goodrich, known as Mollie, in San Francisco. She too was a skillful photographer. The Flys left California and arrived in the rapidly growing mining town of Tombstone, Arizona Territory, in December 1879.

There, the couple opened a photography studio in a tent, but set to work building a 12-room boarding house on Fremont that housed their photography studio and gallery in back. Mollie managed the boarding house and Fly’s Gallery, as it was called, when her husband was away taking photographs. She was one of the few female photographers of the era, taking pictures of anyone who could pay the studio price of 35 cents. Camillus’s brother Webster was also a photographer and Webster lived at the house from June 1880 through at least June 1882.

The Flys photographed all manner of Tombstone residents, especially local miners, but also notables such as the town’s founder Ed Schieffelin, diarist George Parsons, local doc, George E Goodfellow, and consort of Sheriff John Behan Josephine Marcus, soon to be Mrs Wyatt Earp, among others – though there is some doubt as to the provenance of the last-named.

When the so-called gunfight at the OK Corral (actually in a vacant lot near the corral, on Fremont Street) occurred, Sheriff John Behan watched from inside Fly’s Gallery and Ike Clanton, whom Buck had photographed, ran away from the fight and hid there. Buck took an active part in proceedings, taking a Henry rifle and disarming Billy Clanton as he lay dying against the house next door. Fly did not photograph the shoot-out (it was too brief anyway) or its aftermath – one story says the Earps threatened him if he did.

The photograph of Tom McLaury, Frank McLaury, and Billy Clanton (the only known picture of Billy) laid out in their caskets after the gunfight is to us now perhaps slightly macabre, but it was a common practice then and it certainly made a historic image.

Buck recorded a fascinating story in 1885. In May that year, on a farm in the Mimbres Valley of south-west New Mexico, eleven-year-old Jimmy Santiago McKinn was kidnapped and his brother killed by Geronimo and a band of Apaches. The boy’s father, who had been away in Las Cruces at the time, gave chase upon his return and was relentless in his efforts. We think of films such as The Searchers or The Missing. But after finding his son’s coat with a bullet hole in the back, the poor man gave up and gradually descended into insanity.

In fact, however, the boy had been taken by Geronimo into Mexico, where the band was pursued and eventually trapped by General Crook, and Santiago was among them. The party escaped but was later caught again, by forces under General Nelson A Miles. A reporter, Lummis, wrote “When told that he was to be taken back to his father and mother, Santiago began boo-hooing with great vigor. He said in Apache—for the little rascal has already become quite fluent in that language—that he didn’t want to go back—he wanted to always stay with the Indians. All sorts of rosy pictures of the delights of home were drawn, but he would have none of them, and acted like a young wild animal in a trap. When they lifted him into the wagon which was to take him to the [railroad] station, he renewed his wails, and was still at them as he disappeared from our view.”

Later the reporter wrote, “Santiago McKinn, the 11-year old white boy, the Apaches’ prisoner taken with Geronimo’s band, will be sent home tomorrow. It is learned that his parents were not killed, but reside at Hot Springs, at Hunter’s, N.M., near the railroad from Deming to Silver City. During his half-year of captivity the lad had grown fully Indianized. He joins their sports, and will have nothing to do with the whites. He understands English and Spanish, but can hardly be induced to speak in either. He has learned the Apache language and talks it exclusively.”

In reality, McKinn re-integrated and remained with the whites in Grant County, New Mexico where he later married, had children, and worked as a blacksmith. Later, he moved to Phoenix where he died in 1941.

CS Fly’s photograph of the boy is really poignant. To look at it, you’d think that young Jimmy had already got the little Apache kids well under his thumb! 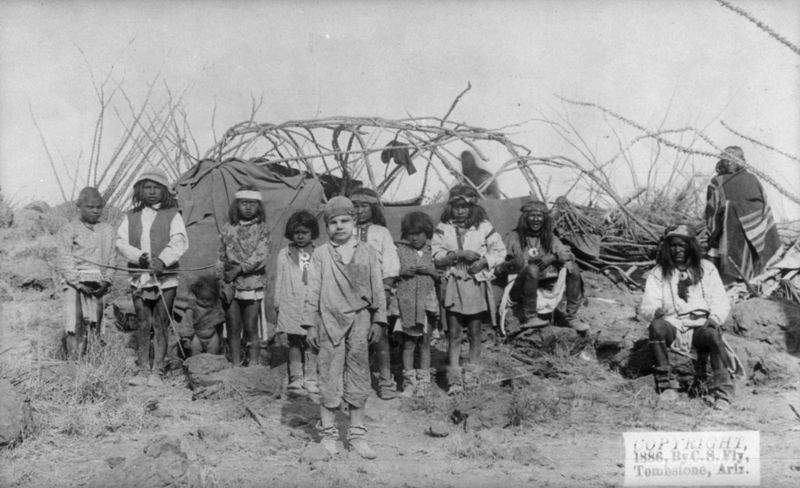 In March, 1886, Department of Arizona General George Crook received word that Geronimo would meet him in Cañon de los Embudos, in the Sierra Madre Mountains about 85 miles from Fort Bowie. Buck learned of the meeting and with his equipment attached himself to the military column. During the three days of negotiations, Fly took about 15 exposures on 8 by 10 inch glass negatives. Especially noteworthy are the photographs Scene in Geronimo’s camp, the Apache outlaw and murderer. Taken before the surrender to Gen. Crook, March 27, 1886, in the Sierra Madre mountains of Mexico, escaped March 30, 1886, and Geronimo poses with members of his tribe and General George Crook’s staff during peace negotiations on March 27, 1886. 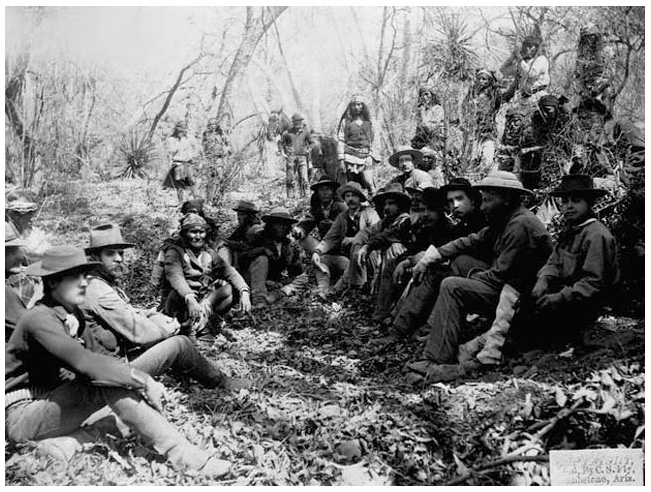 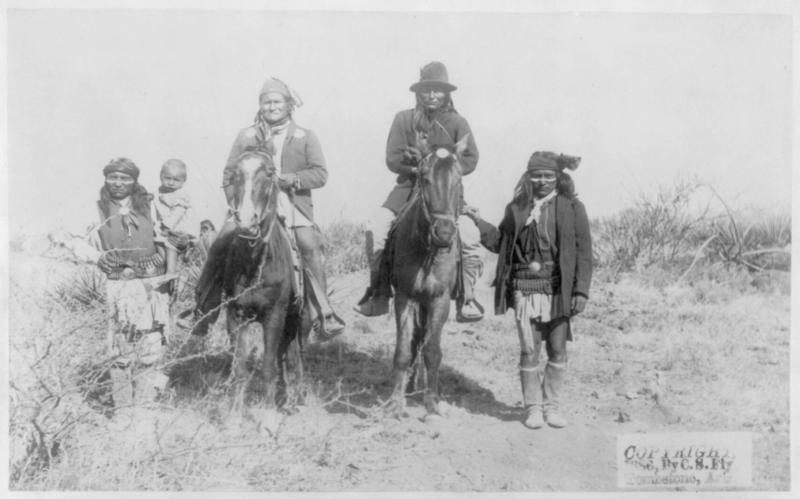 In his memoir On the Border with Crook, Captain John Bourke described how Fly took the historic photographs:

Tombstone photographer Fly kept busy with his camera, posing his Apache models with a nerve that would have reflected undying glory on a Chicago drummer. He coolly asked Geronimo and the warriors with him to change positions, and turn their heads or faces, to improve the negative. None of them seemed to mind him in the least except Chihuahua, who kept dodging behind a tree, but at last caught by the dropping of the slide.

The Mayor of Tucson, CM Strauss, was also present and he later wrote:

Fly is an excellent artist and he was not a respector of persons or circumstances, and even in the midst of the most serious interviews with the Indians, he would step up to an officer and say, ‘just put your hat a little more on this side, General. No Geronimo, your right foot must rest on that stone,’ etc., so wrapped was he in the artistic effect of his views.

Buck sent sixteen of his photographs of Geronimo and his Apache band to the hugely popular Harper’s Weekly, which published six of them in their April 24, 1886 issue, giving the photographer nationwide exposure. 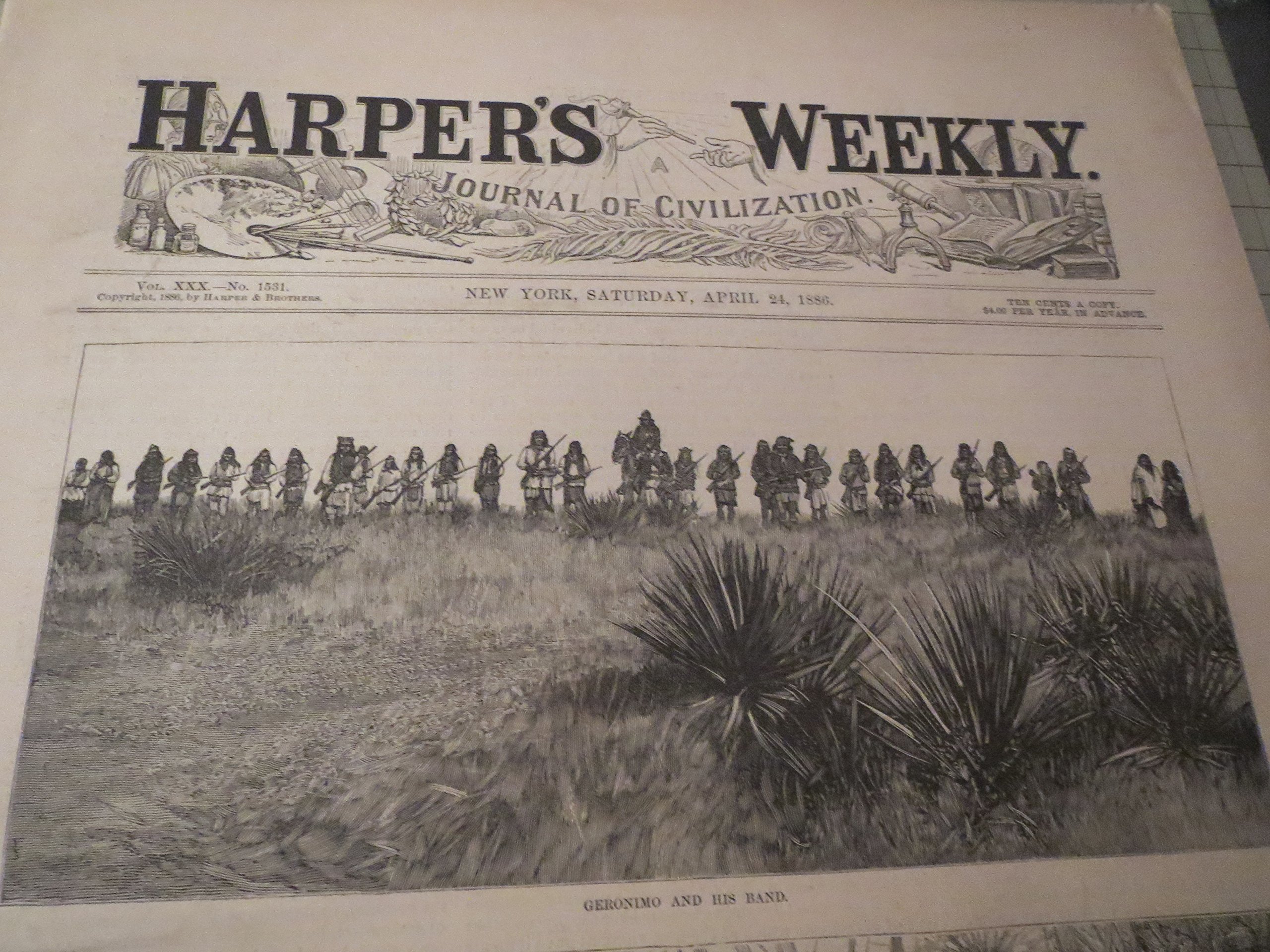 Buck seems to have become overfond of the bottle and in 1887 Mollie left him, moving to Florence with Kitty, the young girl they may have adopted.

On May 3, 1887, a serious earthquake struck Sonora, Mexico, destroying most of the adobe houses in Bavispe and killing 42 of the town’s 700 residents. Dr Goodfellow was fascinated by earth movements and he obtained a commission from the US government to travel to the earthquake area. On his second trip, in July 1887, he took CS Fly with him to record the effects of the quake. They traveled over 700 miles through the Sierra Madres, mostly on foot. Goodfellow used Fly’s images to illustrate his report.

As the mines played out and Tombstone declined in the late 1880s, Buck made extended trips throughout Arizona, trying to make a living taking photographs. He operated temporary studios in Phoenix and Bisbee. The Tombstone Epitaph reported, “During his absence, Mrs. Fly, also an accomplished photographic artist, will conduct the gallery in this city as usual.” In November, 1893, the Flys moved to Phoenix and opened a studio there. When this business failed, the couple, reunited, went back to Tombstone, in 1894, and Buck accepted the Democratic nomination for Cochise County Sheriff.

He was elected in November 1894, succeeding such names as John Behan and Texas John Slaughter, and served through January 1897. He did not stand for re-election; perhaps the drinking still took a toll.

Buck went back to ranching when it became too difficult making a living with his camera, running a place in the Chiricahua Mountains for a time.

Mollie was at his bedside when he died in Bisbee on October 12, 1901. She made arrangements to have his body returned to Tombstone, where it was buried in the new Tombstone Cemetery.

Fly’s Peak, the second highest named summit of the Chiricahua Mountains, is named in his honor.

Mollie continued to run the Tombstone gallery on her own after her husband’s death and in 1905, she published a collection of her husband’s Indian campaign photographs entitled Scenes in Geronimo’s Camp: The Apache Outlaw and Murderer. Coral Henry, a girl whom Mollie cared for after her parents died, described her as “about five feet of pure dignity, very plainly dressed, but in manner Queen Victoria had nothing on her.”

In 1912, the boarding house burned to the ground, Mollie having the presence of mind to photograph the blaze.

The building you see today is a modern replica. 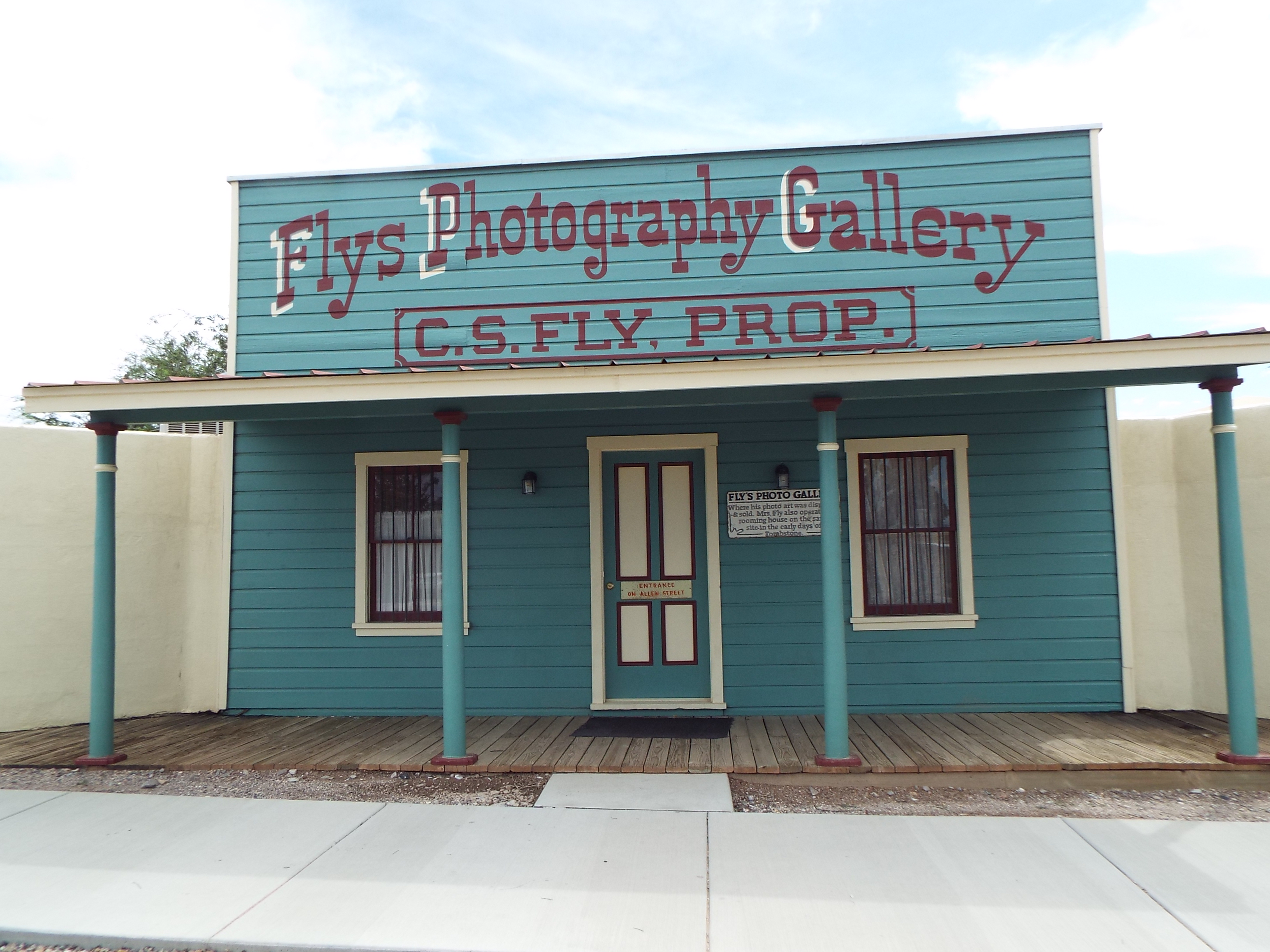 The fire prompted her to retire and she moved to Los Angeles. Before she died, she donated her husband’s collection of images to the Smithsonian Institution in Washington, DC. She died in 1925.

Fly images are very collectible today and command high prices. A cabinet card of Geronimo, Son, and Two Braves was auctioned in Dallas, Texas in 2010 for $10,157.50. Buck would have been surprised that this slightly exceeded the 35 cents he was used to charging…

Curiously, perhaps, we have no extant photograph of CS Fly. Perhaps any his wife took were destroyed in the fire.

Maybe we’ll come back another day with some other photographers. But for now, that’s all, folks!