Inhabiting that shadowy territory between the genres of 70s Western and gothic horror, The Beguiled, which Clint Eastwood’s Malpaso produced for Universal, came, for Clint, between Two Mules for Sister Sara and Play Misty for Me. It was Eastwood’s third collaboration (after Coogan’s Bluff and Two Mules) with director Don Siegel. Siegel, who also produced The Beguiled, said it was the favorite of all his movies. 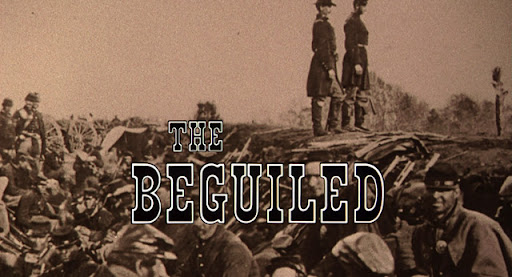 IMDb says, “According to Don Siegel in his biography, Universal Studios did not properly manage the release of the movie, presenting it as one more action movie starring Clint Eastwood, which of course disappointed the audiences faithful to his usual movies.” That might be right, because The Beguiled is not a straight Western, or even a straight action flick. It’s a slightly bizarre, vaguely creepy and highly atmospheric story of cruelty and lust. John Landis called it “a really kinky and odd film.”

During the making of The Beguiled, Eastwood directed his first effort, a behind-the-scenes look at the filming of the picture, with the title The Beguiled: The Storyteller. So we know quite a lot about it. 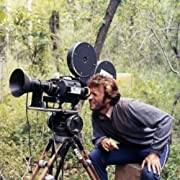 The film is based on the 1966 novel The Painted Devil by Thomas P Cullinan. Patrick McGilligan, in his 1999 bio Clint: The Life and Legend, said that Clint was given a copy by producer Jennings Lang and was engrossed by it throughout the night.

It’s a Civil War story, and opens with loud sound effects of battle over Mathew Brady photographs. They got the look right. For example, Siegel forbade the actresses to wear make-up. But Landis says that they made one slip with Clint: “For some reason, they felt he should have Fabian’s hair.”

IMDb again: “The mansion where the film takes place was about 25 miles south of Baton Rouge, near the banks of the Mississippi River. It was an old dilapidated antebellum home that the filmmakers thought was beautiful, and a small fortune was spent to restore the white-pillared edifice to its Civil War character. The Louisiana plantation, part of the historic Ashland Estate, was once the largest slave-holding plantation in the state.”

Eastwood is a wounded Union corporal pursued by Confederates, who is found by a little girl, Amy, from a nearby boarding school. Amy (Pamelyn Ferdin, 11) says she is twelve, going on thirteen, and in the first of many creepy moments, the corporal kisses her, purportedly to stop her from screaming when the Rebs come near. The all-female staff and students of the school take the wounded man in, though they are ardent supporters of the Confederacy – they say until he is better and they can turn him over, but already you sense there are ulterior motives.

There now begins a sexual interplay in which all the women and girls wish to sleep with the soldier, and for a while none is aware of any other doing the same; but when they find out…

The proprietor and headmistress of the school, Martha, is played by the second-billed Geraldine Page. It is said that Siegel and Eastwood wanted Jeanne Moreau but Universal vetoed the idea. Eastwood said, “I was a bit in awe of Geraldine Page, because she was such a renowned New York stage actress, and I thought she might not be too thrilled working with me. But much to my surprise, the first day on the set, she walked up to me, smiled, and said she was a big fan of mine from my TV series Rawhide.” For your Jeff, Page will always be Angie Lowe in Hondo, her only true Western, though she was also the female lead in the rodeo picture JW Coop. She’s very good in The Beguiled (she always was) as the woman with ‘secrets’: there are hints through flashbacks of incest with her brother, and her love for the school’s teacher, Edwina (Elizabeth Hartman) is clearly, ahem, not entirely platonic.

The non-Western, horror vibe is enhanced by the used of sepia or washed-out color (the picture was in Technicolor but that wasn’t really exploited) and the photography, very fine, in fact, was by Bruce Surtees – his first picture as DP. The intense, claustrophobic and dark setting of the girls’ school, whose isolation is enhanced by the constant – and justified – fear that troops (of either side) might arrive at any moment and pose a sexual danger to the females, is heightened by the Lalo Schifrin music, often discordant in a modern-classical way. As the film’s story descends into psychological darkness, the soundtrack adds organ music, which enhances the Gothic feeling of the piece. The Hollywood Reporter suggested that Siegel and Eastwood “establish a sort of magic fever [by making] extensive use of dissolves and superimposition of scenes, using the lighting as correlative of the character’s internal feelings.”

An imprisoned raven, tied by its leg to a balustrade and kept as a pet (nominally till its broken wing is healed, an obvious comparison to the corporal) gives an even more gothic-horror atmosphere to the piece, though more Roger Corman/Vincent Price than Edgar Allan Poe, it must be said. The portrait of Martha and her brother might well have come from the set of The House of Usher, say. We are definitely more in a horror-film mansion than on a Western set, and if Western it be at all, it’s only at a ratio of maybe 20% to the rest gothic.

Once the women discover that the Yankee soldier is bedding several of them, Siegel reminds us viewers that hell hath no fury like a woman spurned and all that, and they combine to push him down stairs, amputate his broken leg and then poison him with mushrooms. Overkill, you might think, but there we are. I am told that the amputation scene, which is indeed grisly, was edited out of the version first released in the UK (such tender flowers, those Brits) but the, er, uncut version was restored for later releases.

I mentioned the source novel. Vincent Canby in The New York Times wrote, “The screen credits list John B Sherry and Grimes Grice as authors of the screenplay, adapted from the novel by Thomas Cullinan. Those are the pseudonyms, respectively, of Albert Maltz, who did the initial screenplay, reported to have been a romantic comedy, and Irene Kamp, who did the rewrite with help, I’m told, from Claude Traverse, the associate producer.” Maltz had also worked on Sister Sara but will be better remembered by Westernistas for Broken Arrow.

Canby in theTimes called it a “grotesque character comedy that might—mistakenly, I think—be identified as gothic horror. There is certainly horror in The Beguiled, but it is played for what amounts to an extended, completely silent laugh.” Canby added, “The Beguiled is not, indeed, successful as baroque melodrama, and, towards the end, there are so many twists and turns of plot and character that everything that’s gone before is neutralized.”

Variety was also quite critical: “The Beguiled doesn’t come off, and cues laughter in all the wrong places. Pic is essentially black comedy, but treatment is consistently heavy-handed. Script resorts to tired symbolism, including that chestnut that equates southern womanhood with incestuous dreams under the Spanish moss.” It added, that the picture had a “Charles Addams style with Tennessee Williams-type material.”

The The Chicago Tribune thought it “barely distinguishable from a sexploitation shocker.”

Yet the Los Angeles Times called it “a witty and elegant parable of innocence and evil sustained by an intricate interplay of some strongly developed characters”, adding that it was “totally engrossing and utterly convincing.” And The Exhibitor review reported that The Beguiled was “one of the most eccentric and individualistic films to be released in the past few years.” So you pays yer money and you takes yer choice.

Of course is it considered one of Eastwood’s finest works by the French.

The picture came only 26th in the rankings of box office takings that year, grossing $1.1m and thus making a loss. This was, according to Clint, down to Universal’s poor marketing.

I think it’s curious, an off-the-wall and quite interesting movie, though having viewed it at the time and again now for this review, I probably wouldn’t want to see it again.

Sofia Coppola directed another version of the source material in 2017. Haven’t seen it.

PrevPreviousLuke and the Tenderfoot
NextThe Fiend Who Walked the West (Fox, 1958)Next

PrevPreviousLuke and the Tenderfoot
NextThe Fiend Who Walked the West (Fox, 1958)Next
Jeff Arnold © 2022 – All rights reserved – Designed by BetterCallChris
Scroll Up