Ezra Allen Miner, known as Bill Miner and by a number of aliases, was born in Michigan about 1847, became a stagecoach hold-up man in California called The Gentleman Bandit, served many years in prison, but after release from San Quentin in 1901, moved north and, known now as The Grey Fox (Canadian spelling of the color – I mean colour), started robbing Canadian Pacific trains in British Columbia. 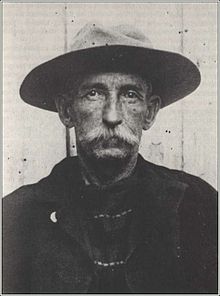 If you want know more, the principal biography is The Grey Fox: The True Story of Bill Miner, Last of the Old Time Bandits, by Mark Dugan and John Boessenecker (Norman: University of Oklahoma Press, 1992).

There is quite a tradition of the ‘Canadian Western’. Of course many Hollywood oaters were made notionally about Canada. Some were visually fine and filmed up there, such as Raoul Walsh’s Saskatchewan (1954) with Alan Ladd, filmed in the Banff National Park in Alberta, and many later Westerns, such as Unforgiven and Open Range, notionally set in the US, were shot in Alberta too. But even the so-called Canadian ones were still just Hollywood Westerns, in which the hero happened to wear a red jacket instead of a blue one. Some of these pictures, like Fox’s Pony Soldier (1952) with Tyrone Power, weren’t even shot in Canada, a handsome but unCanadian Sedona, AZ setting having to do duty as Her Majesty’s dominion. We were reviewing Anthony Mann’s The Far Country recently, in which the citizens of Dawson elect a ‘marshal’ with a tin star. So a lot of these pictures weren’t terribly Canadian really.

But there have also been some Canadian ‘Canadian’ Westerns. Dan Candy’s Law, aka Alien Thunder (1974), for example, was one such. It was a Canadian production with a Quebecker director and New Brunswicker star (Donald Sutherland). It had a pretty ‘Western’ story, though. The Grey Fox belongs in this category.

It was directed by Phillip Borsos, a member of the ‘Vancouver School’, written by Canadian John Hunter and produced by Canadian Peter O’Brian with the cooperation of the Canadian Film Development Corporation. Made in the fall of 1980 and released (at the Taormina Film Festival in Sicily) in July 1982, then in Canada in December that year and subsequently in other countries (in the US in 1983) it was, for a long time, hard to see. It was rarely shown and unavailable on VHS. But it was praised by critics and in 2020 it was restored (very well), re-released in theaters and subsequently on DVD, which is how I saw it recently. Sadly, director and lead stars had by then passed away. But Roger Ebert was right when he called it “a lovely adventure”.

The picture did quite well, grossing $5.5m in 1983, according to Box Office Mojo.

Ebert was glowing about the lead. “Farnsworth is one of those unstudied, graceful, absolutely natural actors who has spent a lifetime behaving exactly as he feels. I think he is incapable of a false or a dishonest moment. He makes Miner so proud, so vulnerable, such a noble rascal, that the whole movie becomes just a little more complex because he’s in it.”

More recently, Dennis Schwartz called it “a Western classic” and said, “Borsos kept it moving with a fast pace, that left no time for any dull moments. While Farnsworth gives it breath and shape in a brilliant likable natural character study performance that plays well with the film’s elegiac feel for the Old West.”

Producer O’Brian and director Borsos originally wanted Harry Dean Stanton to be the Grey Fox, and he was interested, apparently, but jut at that time HDS became committed to Francis Ford Coppola on One from the Heart. It was Stanton who suggested Richard Farnsworth.

Farnsworth, who, then 72, did resemble Miner remarkably well (more than Stanton did) was a real vet. Born in 1920, he worked as a stuntman on many movies, specializing in horsemanship. Westernwise, he started in 1937 in Paramount’s Wells Fargo, as uncredited stuntman, and went on to work on a remarkable 78 pictures in the genre. He stunt-doubled for Gary Cooper and Roy Rogers, among others. He graduated to small non-stunt parts in movies (for example, he had an uncredited bit part in Red River), receiving his first acting credit in 1963. The IMDb bio says, “It was not until Farnsworth was over 50 that his natural talent for acting and his ease and warmth before the camera became apparent”. This ‘newcomer’ was Oscar-nominated for his part in Comes a Horseman in 1978 (a rather dreary film in my view but he was the best actor in it).

The story opens with crackly old silent-movie footage of a stagecoach, and there will be quite a lot of this as the picture progresses, blurring the line between Western and reality. Particularly effective is a scene in which Miner goes to the flickers to watch The Great Train Robbery (1903), is entranced, and decides to start robbing trains (an unknown occurrence in British Columbia). Similarly, when he and his accomplices are finally caught after a failed robbery, scenes from The Great Train Robbery where the outlaws are tracked down are used. It’s well done.

I like Victorian gadgets in Westerns and was amused by the rather nifty apple-peeler he acquires, illustrating technological progress since he went into San Quentin 33 years before (although an occasionally anachronistic script doesn’t help when he calls it a gizmo, a World War 2 Navy term).

He goes back to his sister in Washington State, who welcomes him, but her husband is cold. He tries different jobs, hard work like oyster picking, but, excited by the Western movie he saw, buys a Colt pistol and holds up a train. Producer and director tried their utmost to get Miner’s actual pistol, but the museum that held it wouldn’t play ball. Still, they got an 1894 .41 Colt Bisley, the same model, from a collector, and Farnsworth uses this.

In the town of Kamloops he meets a former acquaintance, Jack Budd (Ken Pogue). In American Westerns Budd would certainly have been a crooked saloon owner, probably with a derringer, but here he runs a hotel. He lets Miner lie low in his hotel and uses him and a simple fellow named Shorty (Wayne Robson) as henchmen to commit various crimes for him, including horse rustling.

Attracted by the voice of Caruso on a gramophone record, he sees a lady golfer and thus makes the acquaintance of suffragette photographer, Kate Flynn (Jackie Burroughs, described by producer O’Brian as a method actor, in her 40s, going for a Katharine Hepburn vibe) and they rapidly become lovers. O’Brian said (he is forthcoming in an interview, one of the bonus features of the DVD) that the film was planned as a “boys’” train-robbery Western but gradually, as shooting progressed and rewrites came in, became almost a romance. This is true. It’s almost as much a love story as a Western – though not the worse for that. The relationship is really rather touching.

There is a murder in town and Miner assists the local Mountie Corporal Fernie (Timothy Webber) to track the culprit. He becomes almost friendly with the Mountie, and Miner’s willingness to help, general politeness and pleasant demeanor make him an ally.

Enter the Pinkertons. Agent Seavey (Gary Reineke) is a classic Western Pinkerton detective, ruthless, implacable, single-minded. Like Canadian policemen he always gets his man. He drives around British Columbia in an early Cadillac, hunting his prey. In an interesting exchange, the Mountie finds himself defending Miner, using the equally classic Western sentiment, “A lot of people like him. He only steals from the railway.” Yet he more than half knows his new friend must in fact be the robber.

Kate finds out, too, though that doesn’t make her love him the less. She agrees to leave for Chicago. Bill will throw the pursuit off his trail, then join her, he says. You kinda feel it won’t go so well. Another robbery goes badly wrong. His mask slips. They net only $17 and a bottle of liver pills. They run. Mounties catch up with them. They are taken. Bill gets 25 years. At his age, he won’t survive that.

In fact, though, and somewhat to our surprise, there is a sort of happy ending. In 1907 Miner escaped prison – as he had done several times before in the US – and we are told that Kate Flynn went to Paris in 1908 in the company of a wealthy mining engineer named George Anderson. George Anderson was another alias of Ezra Allen Miner.

The Wikipedia entry on Miner says that after his escape, “He moved back to the United States, becoming once again involved in robberies in the South at Gainesville in 1909. There, he served more prison time, and escaped twice.” He died “in the prison farm at Milledgeville, Georgia, of gastritis, contracted from drinking brackish water during his previous escape attempt.” But like many of the audience of The Grey Fox, I suspect, I prefer the movie version.

The picture is beautifully photographed, by British cinematographer Frank Tidy, amateur chef, who three years before shot The Duellists for Ridley Scott. He is said to have had the mantra “every frame a Rembrandt”. Well, I wouldn’t go that far, but certainly there are some wonderful shots, and some limpid light. The New York Times review in 1983 said, “The film has been beautifully photographed by Frank Tidy, which is not to say that it is too beautiful. The small towns and the countrysides look bleak and damp. It’s the sort of world in which one’s feet are always wet.”

The train scenes are fine. Modern Westerns can hardly run to a train. Even a so-called railroad Western like the 2007 3:10 to Yuma remake have to fudge one with a hundred yards of track and some fake smoke behind some buildings. So it’s great to see a proper train in all its Western panoply. And getting robbed, too. Some of the railroad scenes looked a bit like the Durango/Silverton railroad in Colorado, but they weren’t. It was apparently filmed on the British Columbia Railway between Pemberton and Lillooet, British Columbia.

O’Brian calls the film “a North-Western” and says it is “a bit more restrained, a bit slower” than a classic American one. Yes, I get that. It is what I might call episodic, a strung-together series of vignettes. Apparently Borsos originally wanted a maximum of a hundred lines of dialogue. He got more than that but the picture is still primarily visual, and the script stripped-down and spare.

It really is a nice film, and I would definitely recommend it if you haven’t seen it – a distinct possibility, I guess.