Apart from some early scenes, a bore

In Anthony Mann, her survey of that director’s films, Jeanine Basinger does not include Cimarron among the Westerns. Rather, she accounts it the first of the ‘epics’ the big pictures such as El Cid and The Fall of the Roman Empire that Mann made in the 1960s. I get that, because although Mann tried to heighten the ‘Western’ aspects of the story and play down the soap element, he did not succeed. In fact he was hamstrung at every turn, by producer Edmund Grainger insisting on more and more studio work when Mann wanted to shoot on location, and by the clunky script by Arnold Schulman, who knew nothing of the Western, though plenty about soapy romance.

In a last-ditch effort to combat TV, the big studios went for an all-or-nothing approach, throwing budgetary cares to the wind and trying to provide audiences with what television couldn’t: vast vistas, widescreens, casts of thousands and general epic scope. Mindful of the great success of the 1931 version of Cimarron, which had been a box office smash and had also garnered Best Picture at the Academy Awards (the first and indeed only Western to do that to date), MGM, which bought the property from RKO, decided to do a remake.

With a $5.4m budget and quite a Western plot, at least at the start, Mann probably thought he could do well. He had fine Western actor Glenn Ford and good actress Maria Schell (from Delmer Daves’s The Hanging Tree) as leads. He could go all out on the land rush scene. All seemed set fair.

It was, though, a total flop. It grossed $4.8m, which would have been good money for a typical 50s $1m or $1.5m budget Western (The Naked Spur, for example, cost $1.2m and grossed $3.8m) but which, obviously, lost money for Metro in an embarrassing way.

The picture also received a poor critical reception (the two were doubtless not unrelated). Bosley Crowther in The New York Times said (fairly for once) that “once the land rush is over in this almost two-and-one-half-hour-long film—and we have to tell you it is assembled and completed within the first half-hour—the remaining dramatization of Miss Ferber’s bursting Cimarron simmers down to a stereotyped and sentimental cinema saga of the taming of the frontier.” Crowther added that “it is superficial and the characters are without quality.”

Variety was keener on it, though thought it too long (it has a 147-minute runtime). More than long, I’d say interminable.

Mann had walked off the set during filming and the picture was completed by Charles Walters, the Easter Parade guy, who was clearly more obedient.

The best you can say, as far as thinking of it as a Mann Western goes, is that it marked the transition from Western to epic.

Both the 1931 and 1960 filmings come, of course, from the 1930 Edna Ferber novel Cimarron. I tried to read it once but found it so turgid I couldn’t finish it. Miss Ferber was a prize-winning author and very successful (as well as Cimarron, she also wrote the source books of Show Boat and Giant) but Cimarron is, at bottom, a soapy family saga of (to me anyway) little discernible merit.

It has a heroine, not a hero. Well-to-do Eastern girl Sabra goes West with her handsome husband Yancey Cravat (Ferber had a penchant for odd names). They take part in the famous 1889 land rush and set up a newspaper in the former Indian Territory. Oil is discovered. The West gets settled. Yancey, a footloose character, disappears, and Sabra runs the paper with success, becoming a big wheel in Oklahoma. Yancey reappears in the last moments; he has been working as an anonymous driller in the oilfields and has heroically sacrificed his life to save some coworkers. Sabra arrives just in time to embrace her dying husband, whose last words are, “Oh, mother of Earth, peerless woman, clasp me to thy bosom.” It is, frankly, ghastly. But it is definitely the story of a woman, and only incidentally that of a man.

Yet the publicity for the 1960 movie shouted “The story of a man”, adding, “a land, a love”. People must have been disappointed when ‘lead’ Glenn Ford was written out of the picture for over an hour. Ford’s career in fact faltered from this failure. The actor who had been supremely good in the likes of Jubal and 3:10 to Yuma was reduced to the character in a soap opera.

Mann clearly tried to center the action on Yancey. But he failed. 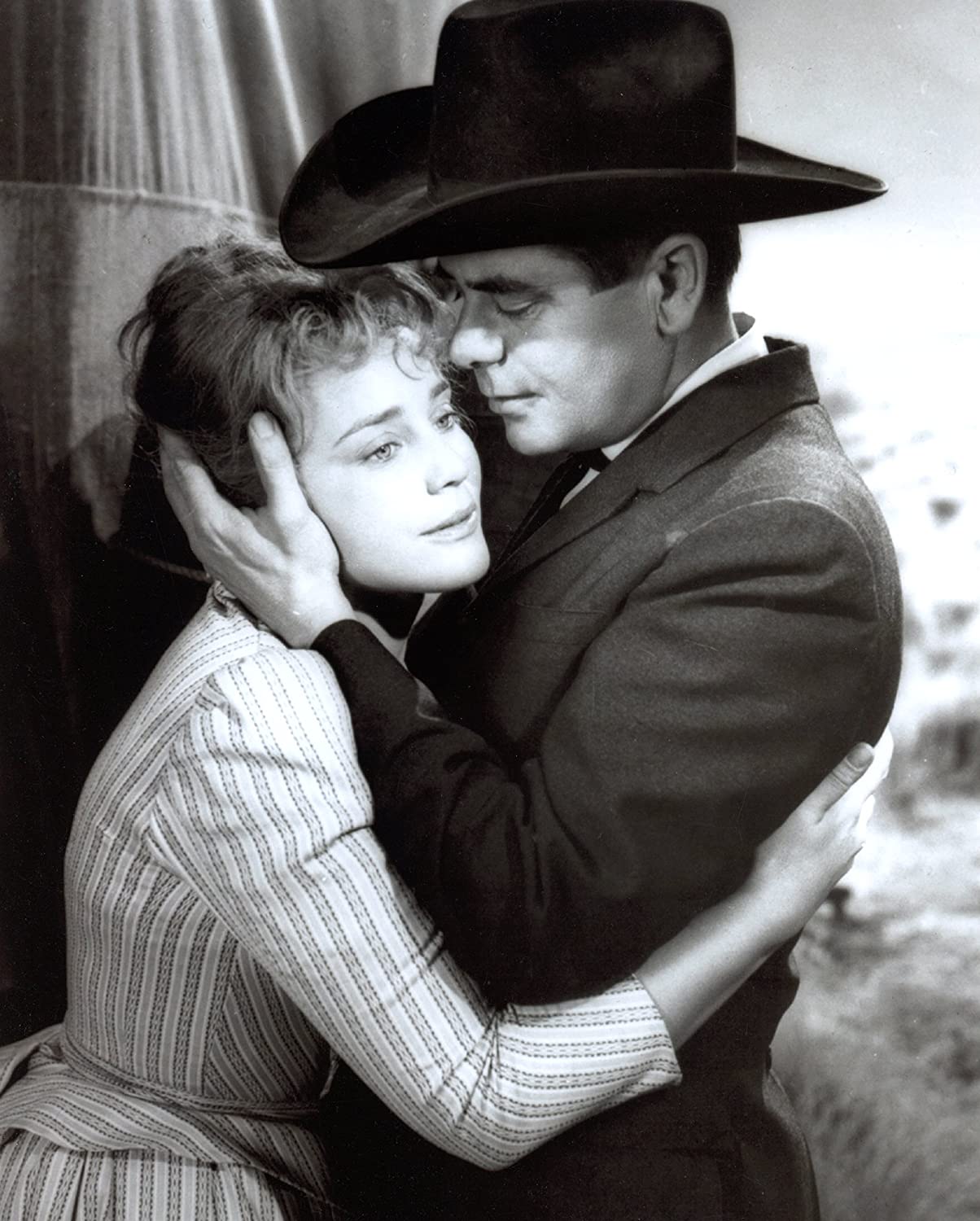 The land rush scene is indeed spectacular, early in the movie. It was also the highlight of RKO’s picture back in ’31, and indeed of William S Hart’s Tumbleweeds in 1925. The New York Times devoted an article to the filming of it. “Even in this day of movie spectacles, the present filming is undeniably impressive.” Shot this time in color and in widescreen, it was even more spectacular. Thousands of extras, 650 horses. Riders, wagon drivers, every possible conveyance, and always in movie versions a penny-farthing bicycle, for some reason, line up and, on the firing of the gun, rush off to claim their land. There are of course many smash-ups. That’s all part of the fun. And there are nefarious ‘sooners’, cheats who try to steal a march on the start and get their claims in early. Furthermore, it was shot by the great cinematographer Robert Surtees.

However, this scene over, the whole rhythm of the picture slows down to a walking pace. The Franz Waxman score is ponderous and soppy by turns. There are too many in-studio sound stages. The film seems endless.

There are a couple of bright spots. Anne Baxter steals the show as bordello madam Dixie Lee. In fact she is far more sympathetic than the rather unpleasant Sabra. “Don’t confuse me as one of those [whores, she means] in the story books,” Dixie tells Sabra. “You know, with a heart of gold. If I had a heart of gold I’d have sold it for twice its worth.” Basinger calls this “the only good dramatic scene in the film.”

And we also have the great Edgar Buchanan as Judge Hefner, not so broadly comic this time, but rather touching.

Harry Morgan is Jesse the printer and a more portly Mercedes McCambridge (so splendidly malevolent in Johnny Guitar) is the doughty midwife Mrs Wyatt. Later on we have Robert Keith, Royal Dano and LQ Jones in various parts.

But they can’t do much with it. If only the script had been better and direction tighter. Brian Garfield said, “Those who believe in an Anthony Mann œuvre will have a difficult time finding a place in it for this dispirited elephantine sprawl.”

The actors ‘age’ courtesy of the make-up department. In 1960 they hadn’t reached the pinnacle of perfection as far as this was concerned and so we just get Maria in a white wig.

Every now and then there are brief episodes which show us the Mann Western that might have been, such as the bank robbery, in which Yancey captures the bad guys. But such moments are pitifully few and far between, and all concentrated in the early part of this dreary film. There’s a worthy dig at anti-semitism and a lynched Indian to add darkness; racism is quite a strong current running through it – it harks back to Mann’s Devil’s Doorway in that respect.

It may be simply that an optimistic picture about the founding of the West, celebrating the American way of life and conquering spirit, was out of kilter with the 60s zeitgeist, an age that was questioning American values in so many ways. More likely, people just found it tedious. But anyway, the least of Anthony Mann’s Westerns, it was in fact hardly a Western at all.

And there we shall leave Anthony Mann. I hope you have enjoyed our survey of his Westerns. But from next time, it will be on to other matters!