We have already reviewed the Wyatt Earp picture John Sturges directed in 1957, the hugely successful Gunfight at the OK Corral. Click the link for that. Well, ten years later Sturges was back in Tombstone for another crack at the Earp legend. It was decided to name it Hour of the Gun (replacing the working title The Law and Tombstone).

Sturges (below) is said to have wanted a more realistic portrayal of Earp, perhaps influenced by the gathering anti-Earp sentiment that was going around and which would soon result in debunked Wyatts, when he was shown as a conman and crook. Sturges is reported to have said, “I can tell you, I don’t go for all that Stuart Lake baloney”. You certainly wouldn’t have known that from OK Corral. In the end, though the Wyatt Earp of Hour of the Gun was certainly a harder, colder, even ruthless one compared with Burt Lancaster’s in OK Corral, he was still a pretty legendary Earp.

James Garner was cast in the role. He wrote in his memoirs that he agreed to make the film without reading the script because he thought so highly of Sturges. It was perhaps a risky strategy in that Garner was strongly identified in the public mind, especially the Western-lover’s mind, with his Maverick persona, in the show that ran for five seasons from September 1957 through July 1962, and now he had to be gritty and hard-boiled as Earp. In reality, though, Garner had only done one Western since Maverick, and it was Duel at Diablo, in which he was, yes, gritty and hard-boiled. Garner was actually a fine actor and he was more than capable of carrying off the Earp that Sturges and his writer wanted. Plus, he had a mustache. 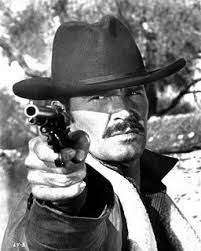 Said writer was Edward Anhalt. Former journalist Anhalt turned to screenwriting and producing, and he won two Oscars. This was his first Western, though, of only two (he would co-write Jeremiah Johnson in 1972). His screenplay for Hour of the Gun was based on Douglas D Martin’s Tombstone’s Epitaph, an interesting book (with a foreword by Casey Tefertiller) that tells the story through articles from the Tombstone newspaper The Epitaph. In the movie Anhalt also plays a doctor in Doc’s Colorado sanatorium.

Another fine actor was cast as Doc Holliday. Jason Robards was too old to be Doc really (45 against Doc’s 30 in 1881) but honestly such age discrepancies have never worried me; much more important is the characterization and delivery, and Robards was definitely one of the better Docs, worthy to be numbered among the likes of Victor Mature, Kirk Douglas, Val Kilmer and Dennis Quaid. He is splendidly misanthropic and also technically superb as a man with TB.

Furthermore, any Western with Robert Ryan in it is likely to be worth watching and here he is Ike Clanton. This Ike is not a rustling lowlife coward, as he was so often in Tombstone movies (see, for example, Victor Jory in Tombstone, The Town Too Tough To Die) but rather a rich rancher and political wheeler-dealer. Ryan always did well as the hard boss, the superior tough, and he was well cast for the Clanton persona Sturges and Anhalt wanted. Once again, he was 57 to Ike’s actual 33, but once again, so what?

The support cast, however, is rather bland. It is said that Sturges wanted the same Virgil and Morgan as he’d had in ’57, but John Hudson (Virgil) had retired and DeForest Kelley (Morgan) was too busy being Bones on Star Trek. So we got Frank Converse as Virgil and Sam Melville as Morgan. Both were rather colorless though, I fear. But then that was often the case. By having insipid brothers, reduced pretty well to sidekicks, you build up your hero Wyatt.

Jon Voight is Curly Bill, so that’s something, though it’s a pretty small part.

One way that Hour of the Gun was a kind of reversal of Gunfight at the OK Corral is that it is Earp who slides from probity into becoming a vengeful killer, while it is Doc who tries to keep him on the moral straight and narrow. I’m not sure that convinces.

Hour of the Gun is unusual among Wyatt Earp movies in that it starts with the gunfight at the OK Corral (it takes place in the corral, as Sturges’s previous version had), not ends with it. It is more a story of the so-called Earp Vendetta. After the gunfight Wyatt and Doc are brought to trial by crooked Sheriff ‘Bryan’ (the Behan figure, played by Bill Fletcher) but the charges are thrown out by the judge. Young Virgil agrees to run for city marshal but is gunned down in an ambush by Clanton’s gang and left for a cripple. Morgan volunteers to replace him, but is killed by the gang. Wyatt goes on his vendetta ride, eliminating those he considers responsible. He gives one of them a chance to draw first, as per Stuart Lake, so he’s still a Hollywood Earp in many ways. The movie climaxes with Wyatt and Doc going down to Nogales in Mexico, there to have a quick-draw showdown with Ike.

Actually, Ike Clanton’s death had nothing to do with the Earps. In January 1887 a detective, Jonas V Brighton, attempted to arrest Clanton for cattle rustling and this time Ike couldn’t run away quite fast enough. Brighton shot him through the heart.

So the history is certainly being distorted. That’s OK – or almost. As I have often said, I have no problem with Western movies that are not true to historical fact; that’s not what they are for. We have documentaries and history books if we want the true story; Westerns are supposed to be entertainments.

The only time I do have a problem with it is when the movie claims historical accuracy. I don’t know if the director or writer was responsible, or if the studio’s marketing people imposed it, but the film starts with a claim in block caps: THIS PICTURE IS BASED ON FACT. THIS IS THE WAY IT HAPPENED. It is not the way it happened at all, and the statement is deliberately misleading, not to say mendacious.

Lucien Ballard’s photography is excellent (though the Panavision looks wonky on the small screen) and the Arizona and Durango, Mexico locations are appropriately dusty and sunny. Roger Ebert said that the picture was “beautiful to look at. All but the interiors were shot on location in Arizona, and Sturges evokes the land more realistically than, say, all those panoramic wagon train shots in The Way West did. There are stereotyped landscapes with tumbleweeds and mountains in the background, sure, and you expect them. But there are also lovely little ponds at the bends of rivers, and horse paths with trees meeting overhead. Some of the towns and villages are probably stage sets, but others are obviously real and have the unmistakable feel of the old West to them.”

The Jerry Goldsmith music is good too and creates an atmosphere of menace and danger.

The picture didn’t do too well, making $2m on its $1.8m budget, and certainly doing nothing like the business of Gunfight at the OK Corral, partly because the Western genre was having a hard time by the late 60s and partly also because the public wasn’t yet ready perhaps for the less Hollywood-heroic Earp that would soon be all the rage (as we shall shortly see when we review 1971’s version, Doc). The critical reception was also downbeat.

Allen Barra in his book Inventing Wyatt Earp says, “This was the darkest Earp to date, a more disturbing image than Warlock [see our review of Warlock, the book and the film] because it openly identified itself as a Wyatt Earp movie.” Certainly the posters asked starkly, “Hero with a badge or cold-blooded killer?”

According to Bruce Eder on Allmovie, Sturges never thought much of Gunfight at the OK Corral. In conversations during the final years of his life, he maintained that it was a production that was planned, scripted, designed, and cast by its producer, Hal B Wallis, for which he was merely hired to direct. Sturges was much prouder of Hour of the Gun. 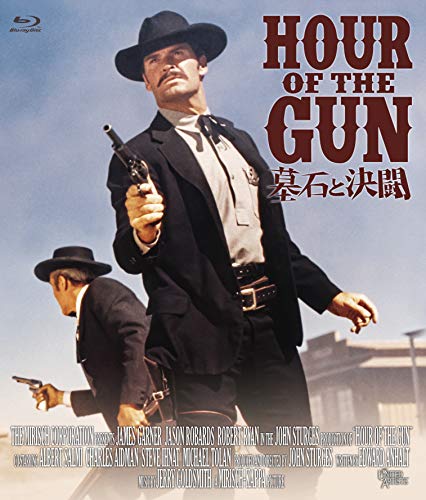 But I would certainly recommend a look at this one, if you haven’t seen it. There’s a Blu Ray now. Despite all the historical hooey, it is still quite a good version of the post-OK Corral events, or at least would do until Tombstone and Wyatt Earp came along in the early 1990s.

Plus, everyone likes James Garner.

In 1988 he would again be Wyatt in the rather charming (I think) Sunset. We’ll review that another day.