By the start of the 1970s the full force of revisionism had fallen upon the Western movie. Former goodies were recast as the out-and-out bad guys. Pictures like Little Big Man and Soldier Blue (both 1970) portrayed Custer as a murderous megalomaniac and the US cavalry swooped down on defenseless villagers in Western versions of the My Lai massacre in Vietnam (1968). Though Billy the Kid was an outlaw, he had always been portrayed as a good guy in Westerns, often as a real hero, but in Dirty Little Billy (1972) he was a sniveling punk. It was inevitable that the paragon of Western lawmen, the clean-up-the-town marshal, Wyatt Earp, would suffer the same fate.

And so it was. Doc put Doc Holliday at center stage of the Tombstone story and relegated Wyatt to a frankly loathsome character. Inept with his fists, cowardly, corrupt, Wyatt Earp became a reptilian politician. 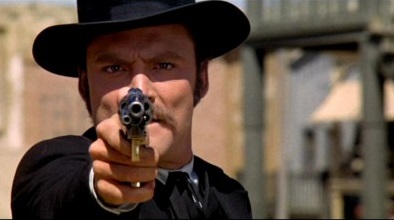 It had been some time coming. In 1960 Frank Waters’s book The Earp Brothers of Tombstone, written long before, was finally published. Waters had talked at length with Allie, Virgil Earp’s widow, who disliked Wyatt for the glory that he had achieved, overshadowing her beloved Virgil, and detested his wife Josie (“a strumpet”). The Earp Brothers of Tombstone portrayed Wyatt as a very different character than the heroic one that Stuart Lake had written about in Frontier Marshal (1931) and successive movies had shown, as recently as Gunfight at the OK Corral in 1957. And in 1967, John Sturges, who had directed Gunfight at the OK Corral, returned to Tombstone with a much darker Wyatt, a post-Corral gunfight story of a man ruthlessly bent on revenge, Hour of the Gun. Aficionados divided into pro- and anti-Earp camps and endless articles and books appeared defending one or other of these views.

Doc was produced and directed by Frank Perry, probably best known for Mommie Dearest ten years later. It was written by journalist Pete Hamill. In a preface to the published script Hamill made it clear that he saw Earp as a symbol of the imperialist USA that was preying on the population of Vietnam. Hamill wrote that he and Perry “talked a little about Wyatt Earp, and how I felt that Lyndon Johnson was some distorted version of Earp.” He wrote, “Indochina was Dodge City and the Americans were some collective version of Wyatt Earp.” Hamill added, “We both knew from the sketchy history that Wyatt was nothing at all like the legend he later made up. He was a politician, a bully, a man who had hustled towns and moved on with the railhead.” Finally: “The more we looked at the evidence, the clearer it became that the whole myth of the West, the whole legend of its heroes, all of that was a lie.”

So Hamill and Perry nailed their colors to the mast. They were going for a full-on bad guy Earp.

Rather surprisingly, I think, Doc won the 1971 Western Writers of America’s Spur Award for the Best Movie Script.

Harris Yulin was cast as Wyatt. He is certainly a secondary character. Third-billed Yulin was clearly subservient to Doc and his woman Kate, played by Stacy Keach and Faye Dunaway. Hour of the Gun had given us a Doc Holliday (Jason Robards) as a moral force, a man trying his best to keep the vengeful Wyatt (James Garner) on the straight and narrow, and Doc took this further by making Doc the hero – a gambler and a killer, yes, but fundamentally a man of decency, contrasted with the snakelike Earp.

Mr Yulin gives us a seriously creepy Wyatt Earp. Dressed slickly but in an unusual brown, with two tie-down guns, one of them a Buntline Special, he comes across as pretty well a psychopath. Ringo (Fred Dennis) says at one point, “That Wyatt Earp ain’t right in the head.” And Ringo does seem to have a point. There is a hinted-at homosexual fondness that Wyatt has for Doc, or at least Wyatt is certainly jealous of Kate. It’s all very 70s.

Neither Keach nor Yulin had done a Western before and the same was true of New Yorkers Perry and Hamill. It showed.

Ike Clanton (Mike Witney) beats Wyatt up in a fistfight and one motivation for the gunfight at the OK Corral is revenge for this act. The movie was the first to feature the Benson stage robbery as a plot device. Central to the story is the deal Wyatt does with Ike Clanton: turn over Ringo for the stage robbery and Ike gets the reward money while Wyatt gets the credit – a major advantage when running against Behan (Richard McKenzie) for the lucrative post of county sheriff. When Doc hears about this he says, “We sound like bad people, Wyatt” and Earp replies, “We are, John.”

Actually, this deal did take place. It wasn’t Ringo that was to be turned in but others of the Clanton/McLaury clan, and when they were killed in separate incidents, the deal fell apart. Behan was re-elected. Ike was left vulnerable because if it had emerged that he had been ready to betray his crew, he would have been done for. Wyatt would have been embarrassed too, of course, but Ike risked losing his life. In Doc, Wyatt announces that he is going to kill Ike; it is a deliberate, pre-meditated scheme and he engineers the OK Corral fight to carry the plan out.

Curiously for a debunking film, Wyatt is once again Marshal of Tombstone. This may have been from simple ignorance, or possibly so that by building him up a bit, his come-uppance will be all the harder. Virgil (John Bottoms) and Morgan (Phil Shafer) are just hicks who embarrass Wyatt in public, for example by wrestling together in the dirt of the street. At one point Wyatt says he is going to clean up Tombstone. “Clean out Tombstone, you mean,” retorts Virgil, with a snigger. Virgil looks younger than Wyatt, and in fact the actor was. At least this time, James (Ferdinand Zogbaum) is not shown as the innocent boy, the youngest of the brood.

Wyatt’s lifelong friend and admirer John Clum has become a pioneering anti-Earp investigative journalist who prints in the Epitaph (the only paper in town) the dirt on the clan and brings the Earps down. Clum is played by Dan Greenburg but his impact is diminished by his looking incredibly and amusingly like Quentin Tarantino.

At the OK Corral the Earps just walk in and blow the Clantons and McLaurys away, though Morgan is killed in the process, giving Wyatt the chance to make a sickeningly cynical political speech to the townspeople saying that he was proud to have done his bounden duty as a peace officer and protect the decent people of Tombstone from violent trash. His brother’s death, he says, will bring good results in the long run, and will result in “a better Tombstone.”

All of this is of course just as fake as the old hero-Wyatt versions that went before.

You could argue that Doc was in many ways a necessary corrective. Wyatt had become absurdly saintly. Anyway, we don’t watch Western movies for a history lesson. We have books and documentaries for that. If we are going to ‘judge’ it at all, we should judge it as a Western.

I do think Keach was good as Holliday, with an outer shell of cynical toughness, a man made hard by the violent and dangerous frontier, yet who hints at an inner vulnerability. He has a core of decency. But the cold winds of corruption and hatred blow strongly, and are hard to resist. At least, that’s my reading of it. He coughs blood into a handkerchief and frequents opium dens for relief. 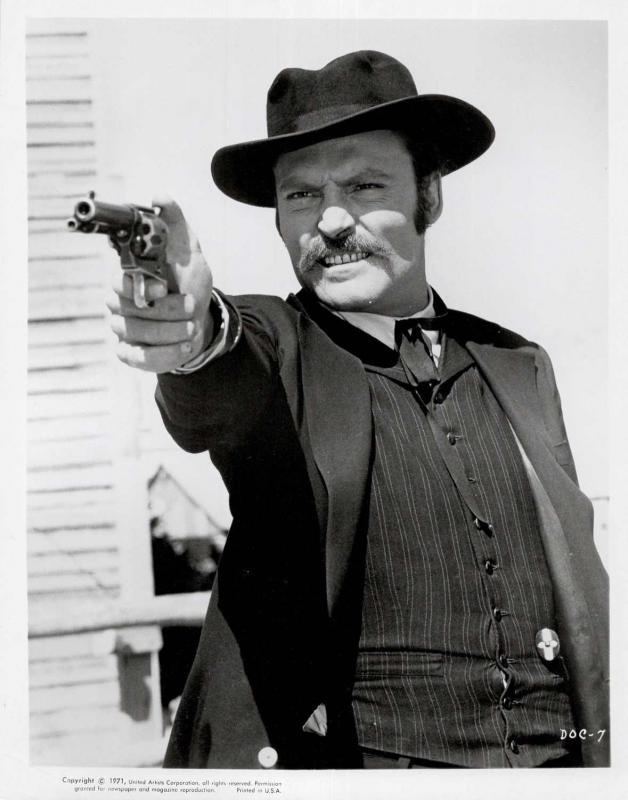 His co-star was Faye Dunaway. In common with about a million male movie-goers, I used to be passionately in love with Ms Dunaway (it was love at first sight in 1968 when I saw her sitting on a dark blue Ferrari 275GTB convertible in The Thomas Crown Affair). The Ferrari owner was posh, rich and refined as well as beautiful, so it came as rather a shock to see her as a dirty and coarse prostitute whom Doc wins from Ike Clanton in a game of cards in a ratty Arizona saloon in the middle of nowhere. However, the year before, she had also ended up in a bordello, in Little Big Man, so I was prepared. In Doc, Faye is Kate Elder. In Wyatt Earp movies Doc’s mistress was usually named Kate Elder or Kate Fisher, I don’t know why. In reality she was Mary Katherine Horony-Cummings, a Hungarian-born prostitute who eventually died in Prescott, AZ in 1940, aged 89. But Kate Elder will do. Frankly, Faye is not the most credible of frontier consorts but I don’t care, I’d watch her in anything.

The look of the film is dark and claustrophobic, and so is the tone. In some ways it reminds us of McCabe & Mrs. Miller, released two months before. It was shot by Gerald Hirschfield and although there is the occasional Old Tucson location, most of it was filmed in Almeria in Andalucia. This doesn’t make it a spaghetti western. The fine Valdez is Coming was filmed there the same year and that is no cheap spaghetti. Production designer Gene Callahan created a convincing Tombstone, AZ in southern Spain.

The language is 70s-salty. Doc and Kate have a bantering insult-trading dialogue. “Bitch!” he says. “Bastard!” she replies. Doc draws a derringer on Ike in the first reel (so that’s good) and threatens to give him another asshole. That kind of thing. It was probably rather daring for the time, and perhaps also authentic to the less refined elements of 1880s Arizona.

The movie invents a character, The Kid (Denver John Collins). He is a kind of Billy Clanton. Traditionally in Earp movies young Billy is uncomfortable with his lawless family and toys with crossing to the law-and-order side of the street but in the end stands by his clan and dies at the gunfight at the OK Corral. So it is with the Kid. Kid idolizes Doc, who teaches him to shoot. Nevertheless, in a very sour moment of the movie Doc shoots him in the heart at the corral after the boy has lowered his gun out of respect.

We have the traditional view of Doc and the Earps (all armed with shotguns) four abreast as they walk down to the corral. There are seven against the Earps and Doc at the corral fight, as there had been in Sturges’s Gunfight at the OK Corral. I suppose it makes the Earp party more heroic, whereas if they only had to face two McLaurys and two Clantons, one of whom, Ike, ran away before fighting, the Earp victory looks less dramatic.

It all does rather leave an unpleasant taste in the mouth. It did badly at the box office. Lovers of traditional Westerns did not care for it one bit. Brian Garfield, for example, in his guide Western Films, said, “It is impossible to be kind to this sort of trash.” But it does make a refreshing change from all those Earp pictures in which Wyatt is a paragon of virtue. Roger Ebert thought that “another look at characters in the public domain” was perfectly permissible, and “Perry’s approach to those strange events so many years ago in Tombstone is altogether fascinating. It is also a good Western, by the by.”

I myself don’t quite agree with the last part, though I do accept that Perry and Hamill had a perfect right to put out their version, and who knows, maybe it was useful corrective. Later Earp movies like Tombstone and Wyatt Earp in the 1990s still had pretty heroic Wyatts, but they could never again be Henry Fonda or Burt Lancaster. They had to make some concessions to the other side. As we shall see when we get to those.