Wyatt cleans up the town – but not Tombstone

As we have seen in recent posts, by the mid-1950s the Wyatt Earp of legend was far more dominant than the figure of historical fact. The hugely popular The Life and Legend of Wyatt Earp premièred on ABC in ’55 (it would run for six seasons, remaining consistently high in the Nielsen ratings and garnering two Emmy nominations) and that year too Will Henry’s best-selling Who Rides with Wyatt was published. Journalist Stuart N Lake’s sensational 1931 biography was now taken as gospel, and Lake was an ‘historical advisor’ on the set of several Earp pictures, including Wichita. Earlier screen Wyatts like Randolph Scott in Frontier Marshal (Lake’s title) in 1939 and, especially, Henry Fonda in John Ford’s My Darling Clementine in 1946 had made the mythic Wyatt Earp into the factual one – or at least the one that most Americans accepted.

Wichita is an unusual Wyatt Earp picture, though, in that it does not tell of Tombstone or even of Dodge, but recounts his first job marshaling, in Wichita. It’s all nonsense, of course, and Earp was never marshal of Wichita, but as I have often said, we don’t watch Westerns for historical truths. Or we’d be pretty crazy if we did. 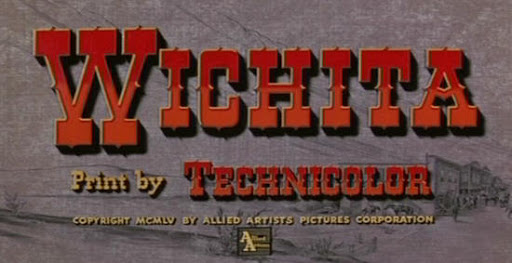 Joel McCrea is Wyatt this time. A great Western actor, he had a quiet authority very well suited to town-taming marshals. He would be Bat Masterson later, cleaning up the town in The Gunfight at Dodge City. The real Earp was in fact reluctant to shoot people, at least before Tombstone, and McCrea was perfect as the tough lawman who will only pull a gun as a last resort. McCrea was 50 at the time of Wichita, twice Wyatt Earp’s age when he arrived there, but age differentials like this have never worried me. 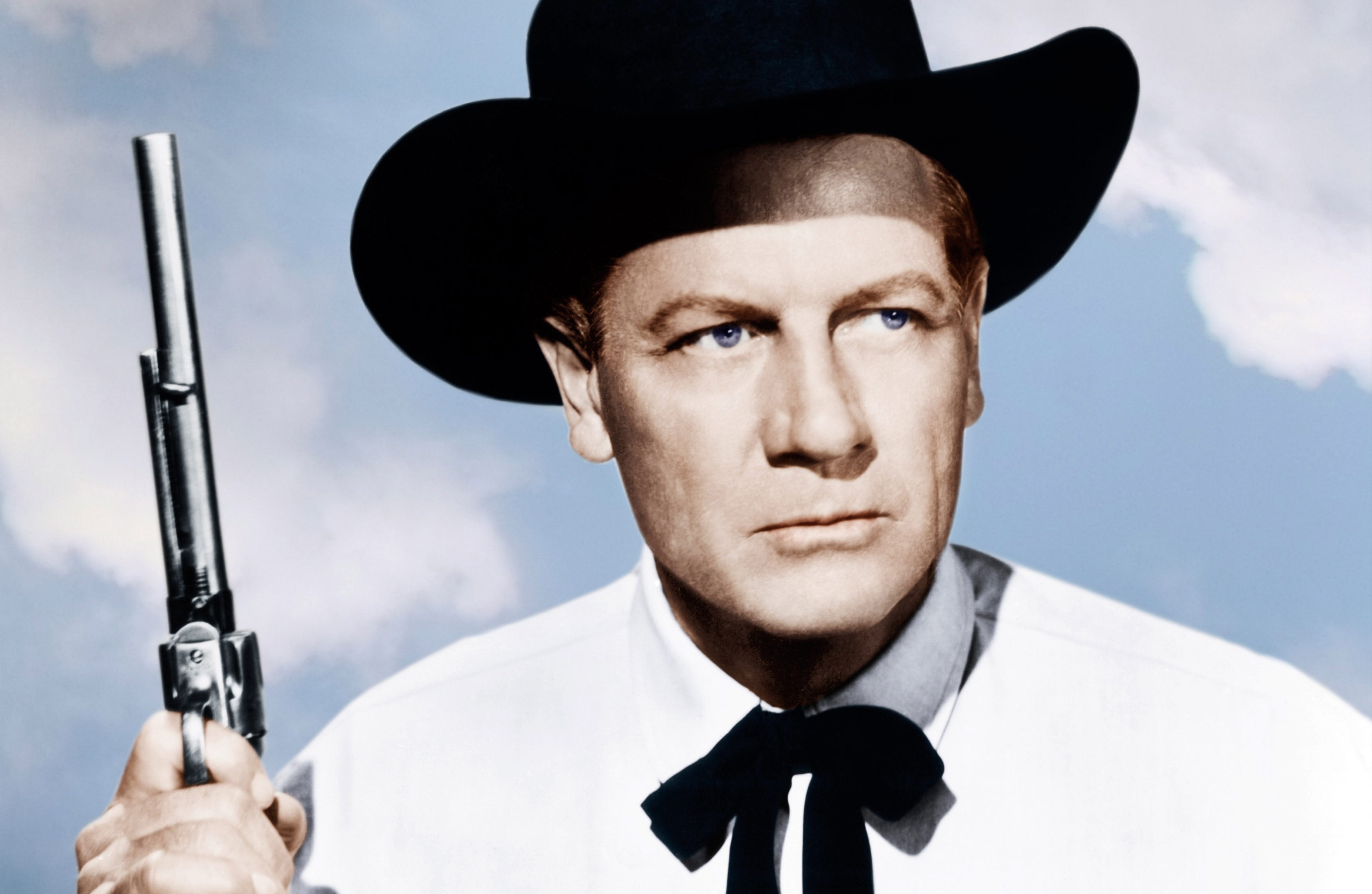 This was the first Western of a series of McCrea pictures by producer Walter Mirisch. Walter and his brothers Marvin and Harold were together one of the most successful producing teams in Hollywood history. They would later produce such 60s hits as Some Like it Hot, West Side Story, The Great Escape and The Pink Panther but as far as proper films go (i.e. Westerns) the Mirisch name deserves endless credit for The Magnificent Seven. Walter started as a producer for Monogram back in 1949 on very low-budget stuff. Once Monogram merged into Allied Artists (Mirisch was one of the prime movers of that deal) he would move upmarket with top stars like McCrea and directors like Jacques Tourneur. Wichita was budgeted at half a million dollars – big money. He would also work with Gary Cooper. So he’s a major figure in our beloved genre.

Talented Tourneur had worked with McCrea twice before, on Stars in My Crown and Stranger on Horseback, and star and director got on very well indeed.

In Wichita McCrea is supported by some great Western character actors: reliable heavy Robert J Wilke (one of my favorites) plays Ben Thompson, with Jack Elam and Lloyd Bridges as his henchmen; Edgar Buchanan is the rascally saloon owner Doc Black – he of course had already been a rascal in an Earp picture when he was Curly Bill in Tombstone, The Town Too Tough To Die, which we reviewed yesterday.

There was in fact a hotel owner Doc Black. A newspaper of the time records how “policeman Erp” got into a fight with him because he was reportedly bullying a young boy, and Earp was arrested for it by Bill Smith, the real marshal.

Good old Wallace Ford is there too, editing the local paper. Joel’s son Jody is a gunman. It’s an excellent cast. You even get Sam Peckinpah as a bank teller.Bat Masterson (Keith Larsen) is in Wichita also, working for Wallace as a cub newspaper reporter for some odd reason. Wyatt recruits him as young deputy (I told you it was nonsense).

James and Morgan Earp turn up towards the end (John Smith from Laramie and Peter Graves) but don’t have much to do. In reality Wyatt probably followed older brother James to Wichita and became an enforcer at the brothel James ran there, but of course that wouldn’t do for a mainstream 50s Western.

It’s a large cast and you can often glimpse well-known faces in the street or in the saloon.

Wyatt carries an extra-long-barreled handgun. In reality it’s a standard seven-and-a-half inch barrel Colt single action but for some reason everyone else carries short-barreled versions and agrees to pretend that Earp’s gun is extraordinary. Of course if the Buntline Special existed at all (see our essay on this gun here), it wasn’t given to Earp until much later, but hey, it all adds to the mystique.

The picture was in Technicolor and CinemaScope (Tourneur’s first widescreen movie and Allied Artists’ too), with DP Harold Lipstein doing a fine job. ‘Kansas’ looks like California and in fact is, but never mind. It is all photographed in a pleasant blue tone. Visually, the picture is a treat. And the lyricism of Hans Salter’s music complements it admirably.The script is sharp and tight. It was by the enormously experienced Daniel B Ullman who started back in 1948 on Tim Holt and Whip Wilson oaters and would later do some quality Bs such as Fort Osage, Kansas Pacific and At Gunpoint, and who would work with McCrea again on The First Texan and The Oklahoman. Ullman’s screenplay of Wichita actually had something interesting to say about business interests conflicting with law and justice, and how to reconcile security with liberty. It is finally pessimistic about the possibility of fighting disorder with guns.

There are some lively scenes of cowboys hurrahing the town. A little boy gets shot, a certain way to get that star onto the shirt of reluctant Wyatt. This idea came from Tombstone, The Town Too Tough To Die, and in My Darling Clementine too Wyatt (Henry Fonda this time) also says no to the badge at first, until ‘little brother’ James is killed, then he changes his mind. I suppose the idea was to show that Wyatt wasn’t out for glory, just doing his all-American duty.

The new marshal duly passes a gun law, stands his ground grittily and cleans up the town. The gang of cowboys backs down. This was not the first time all this had happened, and it would not be the last, but that doesn’t mean it’s a corny cliché. It’s a comfortable convention that we appreciate.

Wyatt also gets the girl. She is Laurie, the daughter of Mayor Walter Coy, and is played by Vera Miles, later to be Laurie again, for John Ford in The Searchers, and Mrs Senator Stoddard in Liberty Valance, and they go off at the end to start anew in Dodge. More baloney but dramatically necessary. In reality, according to the Wichita paper The Beacon, Wyatt got into a fight with Bill Smith himself, was arrested for breaching the peace, fined $30 and dismissed from the police force. The Beacon said, “The good order of the city was properly vindicated in the fining and dismissal of Erp.” But naturally that wasn’t too Hollywood-friendly. In fact Wichita’s cattle trade was declining and the coming place was Dodge, and Wyatt moved there. 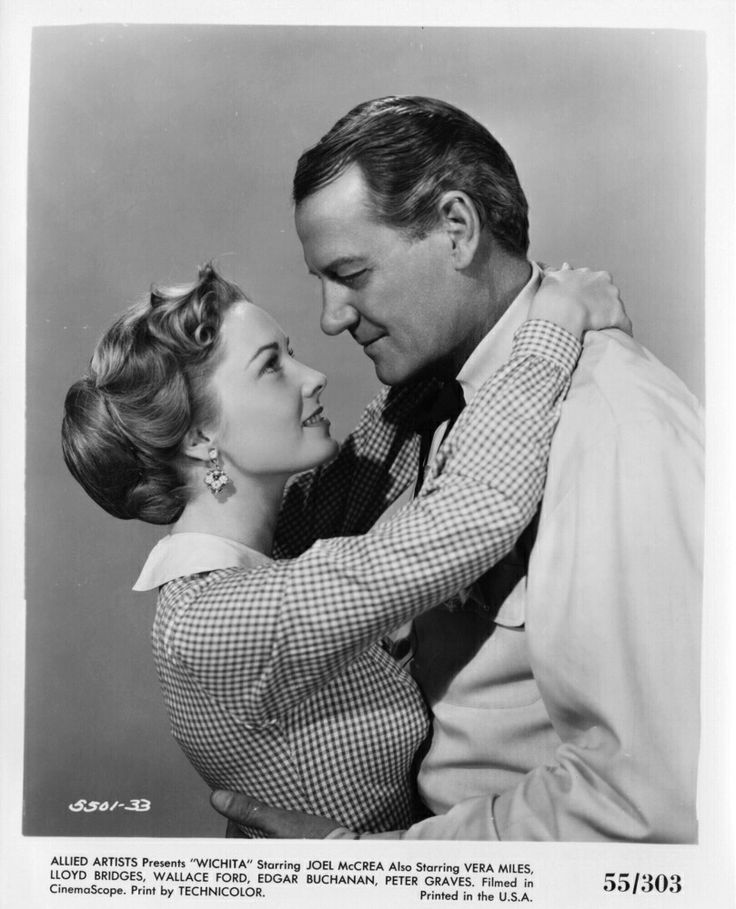 There’s a pretty dire song at the start (which kinda gives the plot away) and end sung by Tex Ritter. 1950s Westerns felt obliged to have one, more’s the pity. Of course Tex’s ballad had won an Oscar for High Noon in ’52 so maybe Mirisch was playing that card.

Wichita grossed $2.4m the first year and got good reviews. Quite right, it is a good picture. It’s a classic Wyatt Earp mythic tale. This and Canyon Passage were Tourneur’s finest Westerns and it was also one of McCrea’s best – and that’s saying a lot. JAW reader Jerry Entract says, “Nothing jars throughout this movie; the pacing of the storyline and action, the fine supporting cast and of course, Tourneur’s directing and McCrea’s central performance.” I agree.

McCrea liked it so much that he and Mirisch put together a TV show which NBC bought and screened as Wichita Town, which ran for a season 1959/60. Joel’s son Jody was his deputy. Joel couldn’t be Wyatt Earp because ABC’s The Life and Legend of Wyatt Earp was running (and very high in the ratings) so he was Mike Dunbar. In a similar way, CBS’s Gunsmoke featured a clean-up-the-town marshal of Dodge, Earp to all intents and purposes, but he was Matt Dillon. So in a way there were three Wyatt Earps on TV at the same time. 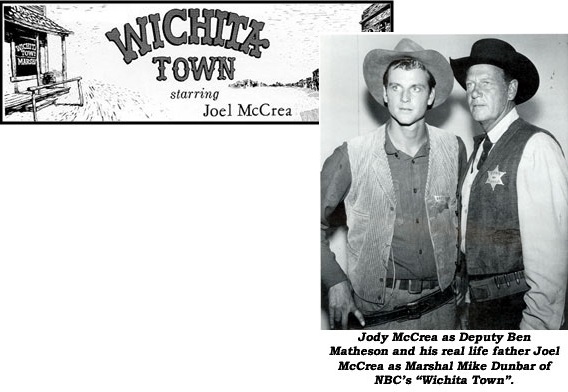 PrevPreviousTombstone, The Town Too Tough To Die (Paramount, 1942)
NextGunfight at the OK Corral (Paramount, 1957)Next
Jeff Arnold © 2022 – All rights reserved – Designed by BetterCallChris
Scroll Up