In 1948 Westerns were in full spate, as we have been seeing recently on this blog, though in fact Fox only released three, this one in April, Louis King’s Green Grass of Wyoming in June and finally William A Wellman’s very successful (and very good) Yellow Sky, in December. Many of the Westerns, including Yellow Sky, and also the likes of Columbia’s Coroner Creek and RKO’s Blood on the Moon, had a distinct noir vibe. It was à la mode. 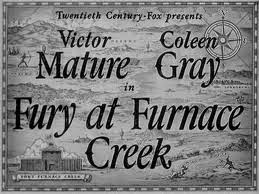 Fury at Furnace Creek starred Victor Mature. Now Mature was the classic Hollywood hunk and became famous in sword-and-sandal pictures. He was Samson in Samson and Delilah as well as playing various other exotic roles in movies about biblical times or ancient Egypt. He was not one you would naturally think of for a Western. But in 1946 he had been a stunningly good Doc Holliday in Fox’s Wyatt Earp picture My Darling Clementine, directed by John Ford. So in 1948 they gave him another go in the saddle. And he was pretty good. 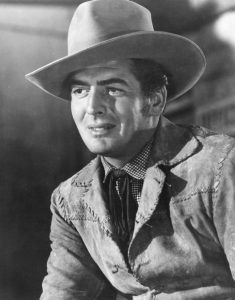 The picture was directed by H Bruce Humberstone, who was one of those jack-of-all-trades film directors who from the mid-1920s to the mid-60s did every kind of movie for Fox. There were Betty Grable comedies and Carmen Miranda musicals, half a dozen Charlie Chan films, a couple of Tarzans – whatever was required. He was probably best at films noirs and thrillers such as I Wake Up Screaming in 1941 with Grable and Victor Mature. Curiously, though, he only directed three Western movies: Lucky Cisco Kid with Cesar Romero in 1940, Ten Wanted Men with Randolph Scott in 1955 and, in between, Fury at Furnace Creek. But all three were more than competently done.

The story starts with 6th Cavalry General Blackwell (Robert Warwick) court-martialed for having withdrawn an escort from a wagon train and caused a massacre by Apaches. We do not see the massacre of the settlers. The train is seen being abandoned by the soldiers, then pulling into Fort Furnace Creek (one of those imaginary wooden forts that Hollywood loved). Suddenly Indians jump out and slaughter the soldiers of the fort. It’s an effective and punchy beginning.

The general has a heart attack and dies on the stand and is thus unable to prove his innocence. But he has two sons who are determined to do so: Rufe, a young Army captain (Glenn Langan) who turns out to be as stupid as he is obnoxious (i.e. very) and Cash, a disreputable frock-coated gambler, the black sheep of the family, whom we first see in jail, doing that excellent trick (which I am determined to perfect one day) of flipping cards across the cell into his upturned hat. You can tell right off the bat that Cash is going to be the one to solve the crime, clear his daddy’s name and of course get the girl.

He heads West. In that coded moment that all we Westernistas recognize, Cash swaps his black frock coat for buckskins, and thus changes from the city slicker into the Western hero.

Really, Furnace Creek is a classic Humberstone/Fox film noir, unsurprisingly because it was pretty well a remake in Western key of Fox’s 1938 John Ford mystery Four Men and a Prayer. Its crime plot has Mature almost as a private eye and its black & white, shadow-filled photography with many night scenes and dark interiors add to the atmosphere. In this way it reminds me of RKO’s Station West, our last review (click the link for that), another ’48 Western, with Dick Powell as hard-boiled investigator.

The town of Furnace Creek, near the now abandoned fort, is owned by slimy bad guy Albert Dekker. Wasn’t Dekker good? I’m sure you agree. The double-crossing gang leader in The Killers in 1946, he was notably, for us Western fans, the horrible railroad detective Harrigan in The Wild Bunch, his last role. But he did sixteen big-screen Westerns. I remember him especially as Bat Masterson in The Woman of the Town in 1943, but more often he was the bad guy.  Furnace Creek was his twelfth of seventeen Westerns and once again he was the rich, powerful and corrupt villain.

Reginald Gardiner is quietly moving in a way as the Army man descended into drunkenness and losing what shreds of self-respect he has left. Gardiner was a RADA-trained Englishman who retained his clipped accent through his many years in California (he arrived in 1935). From being a dancer at a ball in The Lodger in 1927 to a butler in a 1968 episode of The Monkees (I’m sure you remember both), Gardiner was always a delight to see. This was his only Western film.

The girl is played by Coleen Gray as Molly the waitress. She’s perky and bright in a rather one-dimensional part. She was Fen in Red River released the same year. She was in thirteen Western movies and a lot of TV shows. In 1951 she would be once again menaced by Apaches in Universal’s Apache Drums.

The comic relief is provided by the excellent Charles Kemper, entertaining as Peaceful Jones, the town drunk who, for the lack of a town jail, is regularly chained to a massive log in the main street. He is so big, however that he is able to shoulder the tree trunk and go back to the saloon. He and Cash take a shine to each other and Peaceful helps out when the action climax comes. This idea of log-as-jail was repeated in the 1963 Audie Murphy picture Showdown.

Buried, down in the uncredited extras as an Army sergeant, is Ray Teal. What a waste of a great Western character actor. Naughtier, as far as lack of credit is concerned, is the fact that we have a young Jay Silverheels as Little Dog, the Apache chief, whose “master was old Geronimo himself.” Little Dog plays a crucial role, especially at the end (I say no more) so he really ought to have got a mention. Of course Jay rather specialized in playing Geronimo himself.

The score by David Raksin, billed as “original music”, isn’t. It seems to be a straight reworking of the Gerard Carbonara soundtrack from Stagecoach. It’s jolly, though, and gets nicely dark in the appropriate places.

The lovely luminous black & white cinematography is by Harry Jackson (eight Westerns from Cimarron in 1931, where he worked with Cronjager, to Pony Soldier in 1952). The locations were at and around the famous Kanab movie fort in Utah.

The writers were Charles G Booth and David Garth, neither a Western specialist at all, with, however, Winston Miller. Miller had written Mature’s part for My Darling Clementine and was having a good Western year in ’48, writing both Relentless and Station West.

The picture was produced by Fred Kohlmar, a former Goldwyn assistant known more for his comedies – this film and the later Gunman’s Walk were his only Westerns.

The New York Times review was a bit snooty. “Fans familiar with Western fiction are not likely to be knocked off their seats by anything that happens in the Globe’s current Fury at Furnace Creek. For the simple fact is that this ‘horse opera’ from the stables of Twentieth Century-Fox is just another conventional outdoor tussle between the champions of right and the doers of wrong.” The reviewer added an unkind cut: “The only distinction in the characters is that some of them wear whiskers and others don’t.”

But in fact Fury at Furnace Creek is a minor but stylish noir Western which compares well with, say, Yellow Sky, even if Victor Mature wasn’t quite Gregory Peck. I’d give it a go if I were you.