Back last April and May we were looking at Jesse James on the big screen, and how the Missouri outlaw has been mythologized and fictionalized to an almost absurd degree. We paused then, and rode down a side-trail to look at Wyatt Earp and Billy the Kid and how the same happened to them. But now I think we might return to Missouri.

Just a brief recap, with links to click if you want to go back and have a read: we looked at the early silent-movie Jesses, the big Fox picture Jesse James of 1939 and its sequel The Return of Frank James in 1940, Republic’s Roy Rogers versions of Jesse James, various subsidiary-role Jesses in the 1940s, Republic’s late-40s serials, Samuel Fuller’s I Shot Jesse James and Audie Murphy’s follow-up to his Billy the Kid picture The Kid from Texas, Kansas Raiders.

Today I thought we’d look at another ‘lesser’ Jesse James picture (although his part was bally-hooed and built up, it was actually little more than a cameo) and then we’ll embark on later Jesses, from the 1950s on. 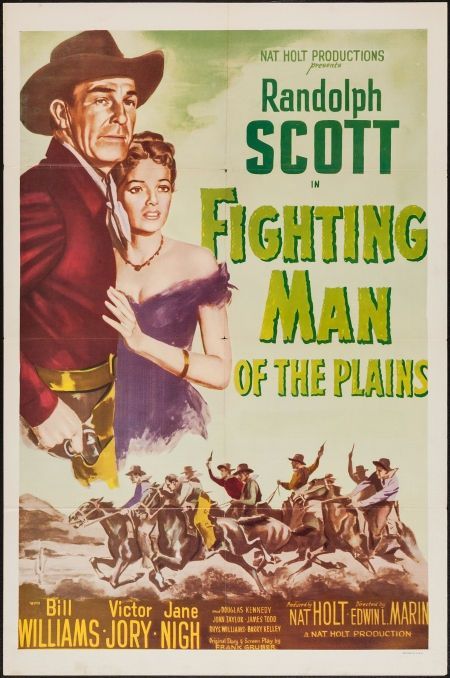 Randolph Scott (click the link for our homage to Randy) participated a couple of times in the 1863 raid on Lawrence, Kansas during the Civil War. He did so reluctantly, a Confederate with principles, standing up against Reb reprobates who wished to do harm to women and children. See the later The Stranger Wore a Gun. In Fighting Man of the Plains he plays Jim Dancer, a classic Western good badman – the sort of role at which Scott excelled. After the war, as a railroad worker in Lanyard, Kansas (a sort of Abilene/Dodge), he tries to carve out a new life for himself, lay down his guns and put his past as killer behind him. But of course his true grit comes out and when the elders need a tough marshal to clean up the town, it’s to Randy they turn, the star goes on the shirt and those guns come back out. That’s basically the plot.

The opening sequences are actually quite surprising. Scott shoots down an unarmed man. You see, guerrilla leader Quantrill (click the link for our essay on him), played by James Griffith and as so often billed as Quantrell, tells Randy that the man was the one who killed his brother. Still, this isn’t what we expect from Randy. What’s more, it turns out the man was innocent. Oops. So Dancer is haunted by this.

He is tracked down by a certain Cummings (good old James Millican), a sleuth from the “Pleasanton” Detective Agency of Chicago, Illinois. Movies often invented euphemisms for the Pinkertons (link to out article on them), perhaps because the real Pinkerton agency was still active and the studios wanted to avoid lawsuits. But in a plot twist, Dancer manages to swap identities with Cummings and takes over the man’s rep as well as his ID. Now Dancer is Cummings.

Lanyard, Kansas is a railroad boom town. There is the inevitable crooked town boss. Such bosses are nearly always saloon owners and nearly always Victor Jory, so when we see saloon owner Jory being decent, and nice to Cummings (the new Cummings) too, we are confused.

The actual crooked town boss appears to be Slocum (Barry Kelley), the real assassin of Randy’s brother. Coincidence, huh? There are other amazing coincidences and stretches to credibility, such as when Joan Taylor as Evelyn, the daughter of the man Dancer shot in Lawrence, happens to live in Lanyard and doesn’t recognize him. In fact she falls for him. But then stretches of credibility are part of the joy in Westerns, n’est-ce pas?

There is, as was traditional, another dame too, Jane Nigh as Florence, and the question is posed, which one will Randy get?

There are some good bits, such as when Marshal Cummings/Dancer with a shotgun Earpishly stands down a lynch mob. A bit of a cliché but Westerns were kinda based on clichés. In a good way, I mean. Let’s call them respectful conventions and then they’ll be acceptable. There’s another episode when the steely marshal in black advances implacably on a foe, shoots him down and then snarls at a bystander, “Was it a fair fight?” Well, no, Randy, it wasn’t, not really, but there you go.

Of course bad guy Slocum is not happy at having his town cleaned up by this marshal. He relies on his tough hired gun Johnny Tancred to do something about that. Good news: Tancred is played by Bill Williams.

A curious feature of the movie is the big build-up given to a virtual unknown, the 26-year-old Dale Robertson, in the part of Jesse. He only appears twice, first 55 minutes in, and for very short times, and it was Robertson’s (credited) screen debut and first Western. In reality, of course, Jesse James was not a participant in the 1863 Lawrence raid at all – he was only 15 – but since when have minor inconveniences such as reality got in the way of a Western yarn? Dale was being groomed for stardom by Fox. He does a decent enough job as a whistling Jesse, it must be said. Once he discovers that a fellow-Quantrill raider and Lawrence alumnus is now marshal of the town he was aiming to hit, he agrees not to rob the bank there, out of comradeship. “I hate to think,” Jesse says affably, if a tad ungrammatically, “of you and I looking at each other across guns.”

It all climaxes when the marshal is unmasked as a former Quantrill guerrilla and a kangaroo court sentences him to hang. A mob, led by hired gun Tancred, escorts him to a handy oak tree. But just as our hero is about to be hauled up, who should re-appear but… yes, Jesse! Randy guns down Tancred with one of Jesse’s revolvers, but not before Tancred accidentally guns down his own boss, ther other bad guys refuse to fight Jesse James, the now ex-marshal gets the gal, roll the credits, fin. Very neat and tidy ending, I agree, but well, a good time was had by all.

The picture was produced by highly experienced Nat Holt, one of seven he did with Scott.

The director was Edwin L Marin, one of Randy’s favorites, so the film is competently done. He’d directed John Wayne in Tall in the Saddle and had already bossed Randy in two oaters, Abilene Town (click for our review) and Canadian Pacific, and would go on to do so again in Colt .45, The Cariboo Trail and Sugarfoot. Film historian David Quinlan wrote, rather harshly perhaps, that Marin “never managed to make a memorable film” but Quinlan did add, “But he had a sure visual eye that often produced pleasing results, notably in some of the Scott Westerns.”

The screenplay was by old hand Frank Gruber, from his own novel Fighting Man. So the personnel was there alright.

The picture has quite a bit in common with The Kansan, link to our review, also written by Gruber. Jesse appeared briefly in that one too.

There’s a touch of interest in that it’s actually quite violent, for the time, and Randolph Scott makes some pretty unheroic moves. Apart from shooting down that unarmed man in the first reel, he cuts off the hand of Cummings to free himself from handcuffs, off-camera, luckily, and he uses one bad guy as a shield from others. These scenes might have surprised 1949 audiences.

The movie was digitally remastered in 2012 and looks nice now, shot in Cinecolor by Fred Jackman Jr, and it has quite stirring Paul Sawtell music. Paul Fix was a co-writer and plays a small part, as bad guy Yancey. Jory may be unfortunately good but he has a derringer. So all’s well with the world.

The picture played well, despite the extremely iffy plot. The Los Angeles Times said, “Fans that hanker to see first rate ridin’ and shootin’ will go for Fighting Man of the Plains.” And The New York Times opined, “Judging by the eager-eyed audience yesterday at the Rialto … thundering hooves and barking six-shooters can still fill a theater when all else fails.” The reviewer added that when Jesse James saved Randy in the last reel, “The general yell that hit the Rialto ceiling was enough to make the original outlaw sit up in his grave and take a bow.”