There had been two ‘A-picture’ Billy the Kid movies from MGM, in 1930 and 1941, and the B-Western had also taken Billy to its heart. Roy Rogers was the Kid for Republic in 1938 and in 1940 PRC launched a series of one-hour second features, first with Bob Steele as Billy and then with Buster Crabbe. In addition, Lippert released a low-budget picture with Don ‘Red’ Barry as Billy in 1950, I Shot Billy the Kid, to cash in on its surprise success of ’49, I Shot Jesse James. The same year, 1950, saw Universal cast its new Western star, war hero Audie Murphy, in The Kid from Texas. This was a bigger (but not huge) budget picture, shot in Technicolor. And in 1954 Columbia decided to respond. 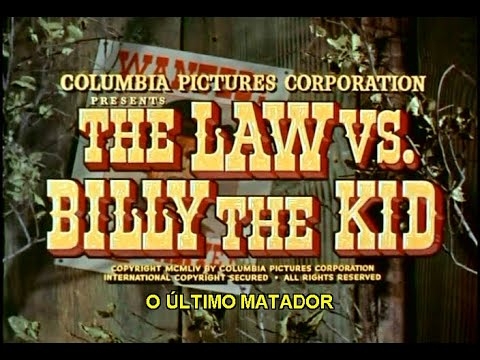 It was a Katzman/Castle picture. I’m sure you know this dynamic duo. Sam Katzman entered the film industry as a prop boy at age 13, and worked his way up, learning virtually every aspect of the movie business before becoming a producer. In the 1930s he churned out Tim McCoy Westerns for Puritan and Victory; the next decade he was turning out the East Side Kids series at Monogram; the 1950s saw him making sci-fi shockers and teenage musicals for Columbia; and in the 1960s he was cranking out hippie/biker films for AIP and Elvis musicals for MGM. He made his films so quickly and so cheaply that he could cash in on a fad before it faded away. Katzman’s movies seldom if ever lost money.

William Castle was a prolific director of low-budget pictures, famous for his over-hyped effects and love of gimmickry, such as in The Tingler. Theaters screening it had a vibrating device attached to the seats to give the viewers a thrill. In the mid-50s he was under contract at Columbia. Some of his Westerns were in the B class, pictures like Jesse James vs. the Daltons three months before this one (he had two back-to-back versus pictures) but he also helmed the likes of slightly more up-market oaters like Masterson of Kansas or The Gun that Won the West. He even directed Glenn Ford in The Americano. His heavy cigar habit probably contributed to his early death aged 63.

Moviegoers paying to see The Law vs Billy the Kid in 1954 probably knew better than to expect great art, or historical accuracy, but they did at least see a lively Western. And it was 72 minutes, in Technicolor, and shot by DP Henry Freulich. It was no Z-movie.

They chose Scott Brady as Billy. He was miscast, really, being in his thirties and beefcake-stocky but of course he had zip and panache. He’d had a few parts in Westerns, such as his Bloody Bill Anderson in Kansas Raiders and his Dancin’ Kid in Johnny Guitar but this was his first Western lead.

The excellent James Griffith was chosen as Garrett. He’d been Bob Dalton in Jesse James vs the Daltons. Griffith always brought a ‘presence’ to his roles. A regular on TV Western shows he also did 40-odd big screen oaters. He was a very good Doc Holliday for Castle in Masterson of Kansas. He never led in a Western, though, more’s the pity.

The history is seriously altered, of course, as so often in Billy films. In this one Garrett and Bonney are fellow ranch hands who get taken on by Englishman John Tunstall. Billy’s a bit wild and Pat tries to keep him in check but he ends up killing him, afterwards throwing down his six-gun in disgust at himself. Tunstall is of course an older man who doesn’t believe in guns. This had become standard. In reality Tunstall was 24, barely older than Bonney himself, though the actor here, Paul Cavanagh, who was at least English, was 66. The real Tunstall had no problems with guns at all. Nor was he Billy’s mentor, as this picture (like most others) shows. Bonney was only in Tunstall’s employ for a few months and for most of that time Tunstall wasn’t at the ranch at all. Never mind, the legend must have its way.

It’s quite a grown-up Western in that Brady’s Billy smokes and drinks whiskey (the real Bonney did neither), which he couldn’t do in those juvenile PRC pictures, for example. It’s also ‘grown up’ in the sense that it’s as much a romance as a Western. There is actually too much romancin’ ‘neath the silvery moon and such; it gets a bit boring. The object of Billy’s desire is Nita (Betta St John), the daughter of Pete Maxwell (Richard Cutting). She is also, oddly, Tunstall’s niece. I suppose Tunstall must have married Pete’s sister Paulita then, though she is nowhere to be seen in the movie. Nita lives with her Uncle John, in his very posh house, exceedingly fancy for a ranch. So of course when Billy gets taken on as a ranch hand, it’s lerve. St John, former child star who had by this time, ahem, filled out, would be the female lead of the rather good The Naked Dawn but otherwise didn’t really do Westerns, poor soul.

To disturb our historical narrative further (not that movies shouldn’t, necessarily) Bob Ollinger has become Tunstall’s foreman. He hates Billy. I think he had designs on the fair Nita himself. He beats Billy up – you can tell he’s a bully – and Tunstall fires him for it. So he’s even angrier and he changes sides, going over to the corrupt Sheriff Watkins (Steve Darrell), the Brady figure. Watkins is in the pocket of LG Murphy (Robert Griffin). At least this movie used a lot of the real names, even if their roles and personalities and so forth have been radically altered. Good news: Ollinger is played by the great Alan Hale Jr. We all love Alan, not just for Gilligan’s Island. Think of all those Westerns – myriad TV shows, of course, but also 23 big-screen ones, from Gene Autry’s Riders in the Sky in 1947 to There Was a Crooked Man in 1970. You always get full value from a Hale. In this one he has a shotgun, naturally, and Billy will eventually do him in with it. He does die unbloodily, though, one of those Hollywood Western deaths in which he grimaces, clutches his stomach and falls down. Oh well.

Also signed on with Tunstall are Charley Bowdre (Bill Phillips), Tom O’Folliard (George Berkeley) and Dave Rudabaugh (William Tannen). I know. But you gotta get them in somehow. They will all perish when Pat’s posse arrives at the cabin they’re holed up in (it’s rarely a rock house at Stinking Springs, usually a wooden shack, cheaper to build, I suppose). Billy will be the only survivor, and will casually be smoking inside when Pat rushes the place, heroically alone (“Cover me!” he shouts to his men, as was de rigueur). Charley Bowdre isn’t pushed out by Billy to face the posse. He nips out behind Billy’s back, nobly sacrificing himself, and though Pat tells his men to hold their fire, Ollinger, the skunk, downs Charley with his shotgun.

The whole story accelerates as the runtime runs down and they have to squeeze in all key plot aspects such as the murder of Tunstall, the arrival of Governor Lew Wallace (Otis Garth), the escape from Lincoln, Billy’s death and so forth. So they telescope events and gallop through them. They do the bit from The Virginian when the fair maiden tries to persuade our hero not to shoot the bad guy but is told that a man’s gotta do what a man’s gotta do. You know how it goes. Of coure Billy doesn’t listen. To be fair, he does try to avoid shooting Sheriff Brady, I mean Watkins. But Watkins draws on him behind his back in the saloon and he is obliged to whirl round and gun him down. That means a $1000 dead-or-alive wanted poster on the Kid. So Pat Garrett has to do his duty and hunt Billy down. Most unfortunate.

Billy dresses all in black, which is quite cool. He’s right-handed. Most movies of the time thought he was a leftie. Right-handed Robert Taylor and Paul Newman practiced for hours drawing with the left hand.

The locations are Californian but quite nice.

Oh, well, it could have been worse, I suppose. The Outlaw was.

The next Billy film would be an arty one, with a method-acting Kid. But that’ll be for next time. So for now, auf Wiedersehen, e-pards.