Jim: Is that bad?

In the last quarter of the twentieth century big-screen Westerns featuring Jesse James, which had been so prolific in the 1940s and 50s, were becoming quite thin on the ground. There was only one in the 1970s, The Great Northfield Minnesota Raid, and one in the 80s, The Long Riders (click the links for our reviews). There were none at all in the 1990s. Finally, in 2001 we got another, American Outlaws.

If I give you a brief synopsis, I am sure you are au fait with Jesse James in fact and fiction by now to tell which plot elements are fact and which are fiction:

After the war, the James boys, unconcerned that the Confederacy has lost, return home to their sweet little apple-dumpling mother, Ma James. The Rock Island Railroad, with president the wicked Thaddeus Rains, is oppressing honest Missouri farmers, forcing them to sell for a pittance. Rains hires Allan Pinkerton as an enforcer. Frank and Jesse organize the farmers to resist. Hotheaded Cole Younger gets himself arrested and is sentenced to hang. Jesse leads a posse on a rescue mission and saves Cole but is wounded by Pinkerton, who is run down by Jesse’s horse. Railroad men now burn down the James home and Ma James dies in the arms of her boys.

Cole gets a list of all banks that hold railroad money and the gang members decide to rob them systematically. Pinkerton sets a trap and surprises them, killing youngest brother Jim Younger. Jesse decides to quit outlawing but while on honeymoon with glamorous Zee, he is captured by Pinkerton. He is to be tried in Washington and is chained to a railroad car to be taken there but he boldly escapes, killing numerous guards. Zee helps by firing a cannon which stops the train. Jesse and Zee ride off to start a new life in Tennessee.

So, have you decided which of those events are true and which are false? Well, as you have probably already divined, not a single one is true. It’s all entirely invented by producer James G Robinson, director Les Mayfield and writers Roderick Taylor and John Rogers. Robinson said that the film was “loosely based on the story of this real person.” This comes as close to a lie as you can get without actually lying, the word loosely just saving Robinson from mendacity. At least the movie’s Jesse James, Colin Farrell, was more honest: “American Outlaws is very unconfined about being historically correct, or by having to try to be historically correct. This is a completely romanticized version of what went on back in the day.” It certainly is.

Right, so it’s baloney historically, and all the old clichés and tired myths are rehearsed. Well, that’s OK, many Jesse movies were like that. As long as it’s well acted, written and directed, right?

Sorry guys, but that’s a nix. Robinson, CEO of Morgan Creek Productions, wanted to make a Western aimed at a younger audience, envisioning an “exciting and fun movie.” He certainly also had his eyes narrowly focused on the commercial success of Young Guns and its sequel, and thought he could do what they did to Billy the Kid to Jesse James. Another producer, Jonathan Zimbert, said, “The James gang is kind of like a rock and roll band out on the road on their first tour together. This is something today’s audience can relate to.” 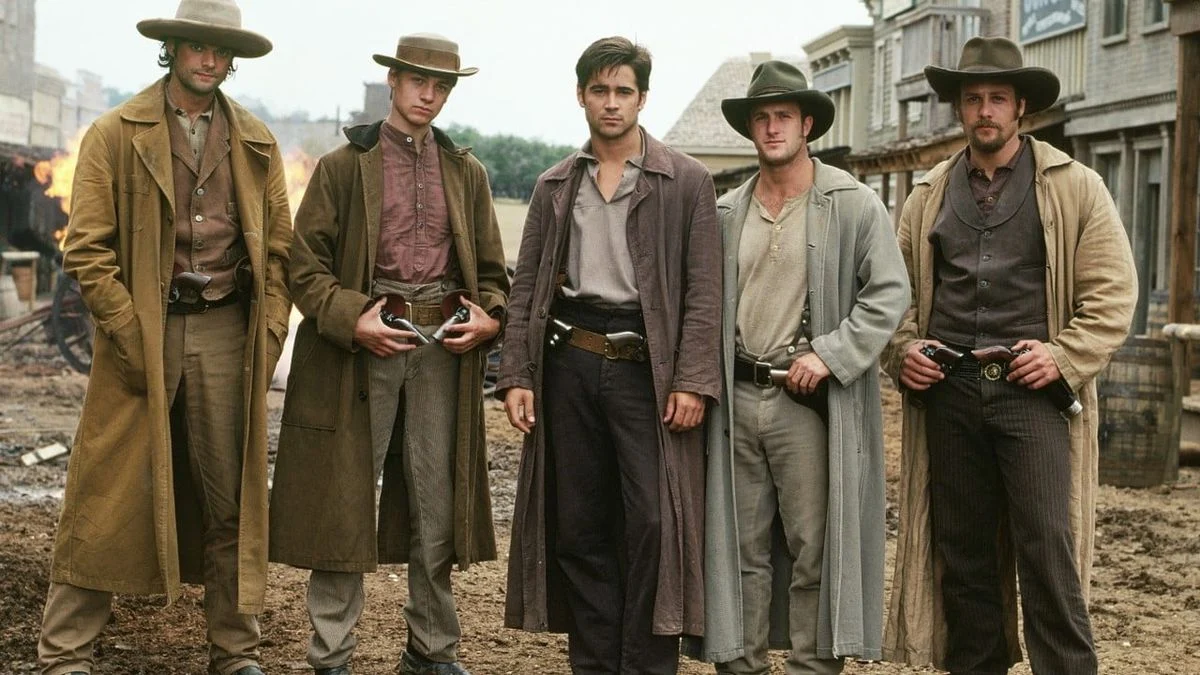 Farrell is an Irishman. No problem there. Plenty of Irish have played Americans (and plenty of Americans have played Irishmen, come to that). The trouble was not his nationality. It was that he was plain unconvincing. He was maybe marginally less wooden than Robert Wagner in The True Story of Jesse James, but it was a close run thing.

His brother Frank is played by Gabriel Macht, best known now as Harvey Specter on Suits, and he’s not bad actually. His Frank quotes Shakespeare and uses long words, like strategic. This was a common idea in movies, that Frank was the educated one. No idea why. But in any case in this tale Frank fades into the background. Jesse runs things (as so often happened in movies). At one point a character says to Jesse, “You did a mighty fine job of leading us during the war.” No, honestly, someone says that.

His chief sidekick is Cole Younger. Cole is played by second-billed Scott Caan, James’s son. He had done well (I am told) in the likes of Varsity Blues and Gone in Sixty Seconds. He is said to prefer theater over film, and in fact when American Outlaws premièred in LA, he was performing in a play he had written himself, Almost Love, which grossed $24.

Zee was played by Ali Larter (also in Varsity Blues apparently) of whom Farrell said, “Well, she’s got a bit of testosterone of her own. She can pack a punch.” It’s probably ungallant of me but I’d say that with that jaw she could probably also take one.

About the best of the cast (it’s only relative) is former Bond Timothy Dalton, who goes completely over the top as the bad guy Pinkerton but is clearly enjoying himself, if not sending the whole movie up.

Railroad man Rains is played by Harris Yulin, the corrupt Wyatt Earp in Doc and himself Jesse James in the TV movie The Last Ride of the Dalton Gang.

Young Guns had Lou Diamond Phillips, half-Navajo, for ethnic street-cred, and they thought they better have an ethnic minority character here too, postively portrayed. Even these film makers probably hadn’t got the brazenness to have an African-American in Jesse and Frank’s company, so they invented Comanche Tom (Nathaniel Arcand) to be one of the guys and accepted as an equal.

Farrell, Macht & Co were taken to a cowboy camp near LA before filming, in order to learn how to ride and shoot. Farrell said, “We hung out with a lot of cowboys and drank a lot of bottles of Coors Light.”

There’s a dance, naturally, but it’s not a patch on the one in The Long Riders. No Ry Cooder here. They try loud rock music, à la Young Guns, and they also take up the worst feature of Young Guns, the stupid phew-phew noises when characters twirl guns or knives, but the picture doesn’t come near those 80s ones. Young Guns and its sequel weren’t wonderful Westerns but at least they had zip. This one is plain turgid.

There’s a fair bit of crashing through store windows, as quotation, presumably, though happily it’s gang members who do the crashing, on foot, not poor horses.

Naturally, the James gang do charitable acts, giving money to farmers and such. There’s hardly an old cliché that isn’t trotted out, really.

They built a Western town specially and shooting lasted 65 days. No wonder the budget spiraled. It got to $35m. Unfortunately, on release in August 2001 the picture made $14m. Oops.

The critics were for once unanimous. Entertainment Weekly called it a “six-gun dud”, Boxoffice said it was “so devoid of narrative, it plays like a prolonged version of the Wild West stunt show at Knott’s Berry Farm”, the New York Times said that it “may be simple, but it’s also simple-minded”, the San Francisco Chronicle remarked that “This plot leaves ample room for viewers to sweat the small stuff, like whether Trevor Nunn’s score is more Marines ad or deodorant commercial” and Roger Ebert said, “For years there have been reports of the death of the Western. Now comes American Outlaws, proof that even the B-Western is dead.”

You will only watch this movie if you are a dedicated completist and feel the need to see every Jesse James picture ever made. Oh, you too?

If you really insist, it’s on Netflix.

Johnny Boggs, in his excellent Jesse James and the Movies, says, “A dismal failure, American Outlaws could well be the worst movie about Jesse ever made.”

I see Johnny’s point, though he may have been forgetting the 1966 Embassy Pictures epic Jesse James Meet’s Frankenstein’s Daughter.

American Outlaws was an artistic, historical, critical and commercial dud.