The first talkie Custer to appear was in an RKO serial, The Last Frontier (1932), starring Lon Chaney Jr, as Tom Kirby, aka The Black Ghost. As you might imagine, it was not quite great art, and it was one of those shows in which Custer, this time played by William Desmond (Phileas Fogg in the silent Around the World in Eighty Days), is pretty well a peripheral figure. He only appeared in Chapter 1. The best thing about the serial was Yakima Canutt as Wild Bill. 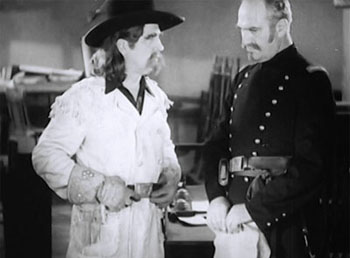 Something similar happened when Custer popped up in a very minor role, played by Clay Clement, in Warner Brothers’ 1933 picture with Paul Muni, The World Changes. But there’s hardly a mention, really.

In 1936 we got Custer’s Last Stand, from Stage & Screen Productions, and you might think from the title that at last we have got a picture properly centered on Custer and Little Bighorn. Yet nay, for this one, another cliff-hanging serial, is really a fraud because only the last two chapters deal with Little Bighorn at all; all the rest tell a tale of one of his scouts, Kit Cardigan (Rex Lease) and how he foils the skullduggery of ‘Keen’ Blade (Reed Howes), referred to as a ‘white renegade’, and bonds with the Indians and gets the (white) girl.

William Farnum, star of the 1914 version of The Spoilers and the 1918 Riders of the Purple Sage, once paid a princely $10,000 a week at Fox, ploddingly overacts as the Indian agent Fitzpatrick. Franklyn Farnum (no relation) has a small part as a frightened Major Reno. And we have Ruth Mix as Mrs Custer. Ruth was Tom Mix’s daughter but I’m afraid that she appears to have inherited few of her dad’s thespian skills (such as they were). Other ‘historical’ figures – you definitely need inverted commas – who feature are Wild Bill Hickok (Allen Greer), who is the marshal in the town; Buffalo Bill (Ted Adams) in full regalia; Sitting Bull (Howling Wolf – not the blues singer one); and Crazy Horse (High Eagle).

Custer himself was played by Frank McGlynn Jr. The last two episodes are devoted to Little Bighorn. Heretofore the general has only been tangential to the plot with occasional appearances (in long hair and buckskins, natch). But now he rides out from Fort Henry (not Lincoln) to the strains of Gary Owen and is bravely annihilated. Of course he is the last to fall (he usually was in movies). 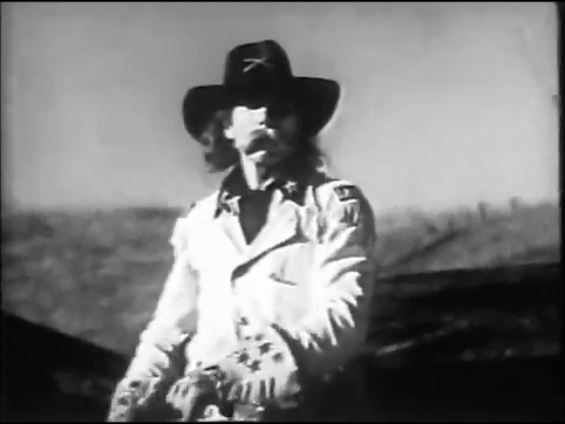 Now it was Frank Jr

The ‘history’ is represented by the on-screen intro text: once gold was discovered in the Black Hills the government tried to prevent conflict but was unsuccessful because “the Hostile Attitude of the Indians … Left but One Alternative – WAR!”

All in all, this was not, I fear, the greatest depiction of GA Custer on the screen.

That same year John Miljan was Custer in the major Paramount picture The Plainsman directed by Cecil B DeMille, with Gary Cooper as Wild Bill and Jean Arthur as Calamity Jane. We’ve already reviewed this one, so click the link for that. Here, just to say that the same year’s Custer, Frank McGlynn Jr, was the son of this picture’s Abe Lincoln, Frank McGlynn Sr. Miljan is a dashing Custer, and we briefly see his last stand, but Little Bighorn is just a fleeting episode in a kind of How the West was Won ante diem, so you would hardly say that Custer gets much limelight. 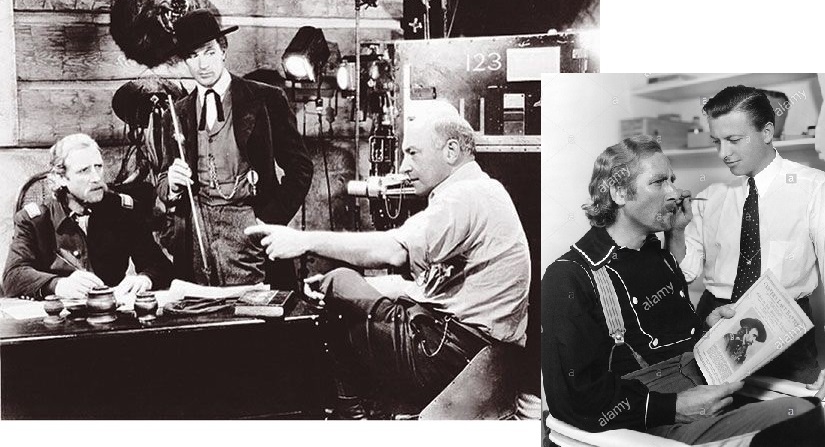 Miljan was Custer in The Plainsman

Next time we shall venture into the 1940s, when future President Reagan was Custer in Santa Fe Trail, and his co-star in that picture, Errol Flynn, himself became Custer in perhaps the most famous Custer pictures of all, Raoul Walsh’s rollicking They Died with their Boots On. So come back soon!