The next screen Custer (see here for the silent ones and here for the early talkie Custers) emerged in 1940. Errol Flynn graduated from West Point twice at that time, for he would soon be Custer in the biopic They Died With Their Boots On – click here for our review – but here, in Santa Fe Trail, he is not Custer. That honor fell to Ronald Reagan (John Wayne had been mooted), while Errol took the part of his pal at the Point, JEB Stuart. 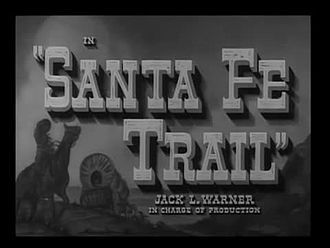 So we have The Jeb ‘n’ George show, with Custer (Reagan bland as ever) as little more than the sidekick of Jeb (Flynn dashing as ever). In fact, of course, Stuart and Custer weren’t even in the same class at West Point, Stuart graduating in 1854 and Custer in ’61. It might have been better to have had Phil Sheridan as Errol’s friend in the movie. At least they knew each other and were more like counterparts when the Civil War came, and the film would have worked just as well. Reagan would have been no more unlikely as Sheridan than as Custer. But I suppose Custer was more Hollywood.

Errol was not only at West Point in both films; he fell for Olivia de Havilland in both too.

There’s quite a lot of similarity between the movies: Michael Curtiz and Raoul Walsh both directed boisterous, rollicking, blood-and-thunder tales of the military with gusto and humor. There is one big difference, though: Walsh was good at Westerns but Curtiz never ‘got it’ as far as oaters were concerned. He was wonderful at other genres, of course – just look at his track record – but none of the eleven Westerns he directed was really good. They had pzazz and they nipped right along. Dodge City, for example, also with Flynn, is big and noisy. But Curtiz oaters just weren’t convincing as true Westerns.

There’s a complex and historically preposterous plot by Robert Buckner again, which I won’t recount here. Suffice to say that it’s about how Stuart, aided by Custer, foils John Brown’s attempt on the arsenal at Harper’s Ferry in 1859. Raymond Massey’s performance as a crazed Brown (“To the Devil with the Union!” he screams) is famous.

He has a huge army (not the 20-odd men of history) at his disposal and throws them into the fight like a World War I general in the trenches. He thinks he is God and the script gives his part various lines of this kind: “We recognize no law but the law of God. You will do as I command.” The conflation of ‘God’ with ‘I’ is obvious. He gets his own Golgotha in the final reel (the scaffold on the hill is eerily shot by talented Sol Polito in black & white). Of course Massey chews the scenery, as he usually did, but in this role he was entitled. Obliged, even. He’d be Brown again in 1955, in Seven Angry Men.

Actually, the best actor in the movie is seventh-billed Van Heflin, as a passionate abolitionist expelled (by Robert E Lee) from West Point who joins up with Brown and provides the cause with military expertise. It is a subtle and powerful performance. Heflin had only appeared in one Western before, as a clergyman in The Outcasts of Poker Flat in 1937, and was to lead or co-star in Westerns from then on, with memorable performances, notably in Shane and 3:10 to Yuma.

Ward Bond is, for the third time in a Curtiz/Flynn Western, wasted in a micropart, this time as an abolitionist volunteer from Illinois, and is then immediately written out. There’s comic relief from a pair of clowns, Alan Hale and Guinn ‘Big Boy’ Williams, Flynn drinking buddies who had been in both Dodge City and Virginia City. There’s a good bit when they crash an officers’ party and get at the punch bowl. Good old Russell Simpson is there too.

Jefferson Davis plays a key role in it all – he is shown as Secretary of War (he wasn’t at that time in fact but never mind) and Jeff Davis and Robert E Lee thwart the raid by sending in heroic Jeb – and the actor they got for Davis, Erville Alderson, looks astonishingly like the Confederate President. Custer gets to woo Jeff’s glamorous blonde daughter – who in historical reality was 4, but I must stop picking holes in the history of it. I can’t help it. I was a History major, you see. Anyway.

It’s no wonder really that Quentin Tarantino felt that we needed a corrective to how Westerns treated slavery (of course Django Unchained certainly did a bit of correcting…) Maybe Warners wanted the movie to sell well in the South, I don’t know, but they sure did a whitewash job. Stuart comes out with the astonishing claim that though of course slavery is morally wrong, Virginia is on the point of abolishing it and only needs a little more time to do so. The slaves collected together by Brown are shown as stupid and they completely lack understanding of their own plight. Palmyra, Kansas, end of the underground slave railroad, is described as a “cancer”. Worse is a conversation Stuart has with a burly slave and his wife which goes as follows:

Jeb Stuart: What made you leave home?

Wife: Well, old John Brown said he was gonna give us freedom but shuckins, if this here Kansas is freedom then I ain’t got no use for it, no sir.

Husband: Me neither, I just wants to get back to Texas and set till kingdom come.

I suppose that Buckner wrote that Tolstoyan prose and Curtiz thought it good and left it in, and Flynn and the African-American actors were ready to say it.

Another odd thing about the movie is that it’s got nothing to do with Santa Fe. There seems to be a completely irrelevant plotline about building a railroad there along the Santa Fe Trail but I still don’t see what on earth it has to do with anything. Bosley Crowther in The New York Times said the picture was “the biggest non-sequitur of the season, from the directional, historical and titular point of view.” They had the première in Santa Fe though, just as they had premièred Dodge City in Dodge City and Virginia City in Virginia City.

There are a couple of songs.

All in all, Santa Fe Trail has a few qualities. It’s energetic and lively, and there’s a lot of gallopin’ and shootin’. There are a few funny lines in the script. De Havilland is back (Miriam Hopkins had replaced her in Virginia City) and is decorative and amusing. But the whole story leaves rather an unpleasant taste in the mouth, and furthermore, the film wasn’t even all that good on its own terms. Dodge City and Virginia City were more fun.

The New York Times liked the whoop-de-woo aspect. “The United States Cavalry comes whooping to the rescue not once but twice—and beautifully.” But the review made the point that “for anyone who has the slightest regard for the spirit—not to mention the facts—of American history, it will prove exceedingly annoying.” Variety enjoyed it, calling the picture “a thrilling saga of hard bitten US army officers’ fight to wipe out John Brown’s marauding crew of Kansas abolition days.”

The picture did well at the box office again, grossing $2.58m on its $1.1m budget. The fans flocked to see it and rejoiced that Flynn and de Havilland were back together.

Actually, they weren’t. De Havilland had grown tired of Flynn’s egoism and misbehavior, including drunkenness and rudeness, and told him she didn’t want to act with him again, so informing producer Hal Wallis. In any case she didn’t care for Westerns, which she regarded as somehow not serious pictures. She longed for weightier roles. Still, in Santa Fe Trail she did at least play a strong-willed independent woman; it was a better part than the one she had in Dodge City.

The picture was in Warners’ snazzy new Vitasound process, and Warners were noticeably good at sound. But they forgot to renew the copyright on the picture, so it is now in the public domain and prints available might be copies of copies, with poor quality audio and image.

It’s barely a Custer movie at all, in any case. But it is another Errol Flynn Western. Until now he could do no wrong box-office-wise and he was gaining a taste for saddle ‘n’ six-gun dramas, after a reluctant beginning in the saddle.

There’s a persistent story that in the opening sequence of the West Point graduation, an automobile can be seen zooming along a tree-lined road in the backgorund and this was driven by Flynn, now at daggers drawn with Curtiz, in an attempt to sabotage the scene. Flynn was certainly capable of such a prank, yet the car remained in the final print. Perhaps it was too expensive and long to re-shoot. But we’ll probably never know if it was really Flynn at the wheel.

PrevPreviousTalkie Custers
NextThey Died with Their Boots On (Warner Bros, 1941)Next

PrevPreviousTalkie Custers
NextThey Died with Their Boots On (Warner Bros, 1941)Next
Jeff Arnold © 2023 – All rights reserved – Designed by BetterCallChris
Scroll Up