There are just a couple more Jesse James movies to review (until another comes along). It won’t take long, because they were both pretty poor. And neither was about the real Jesse James. They both nominally starred Peter Fonda. 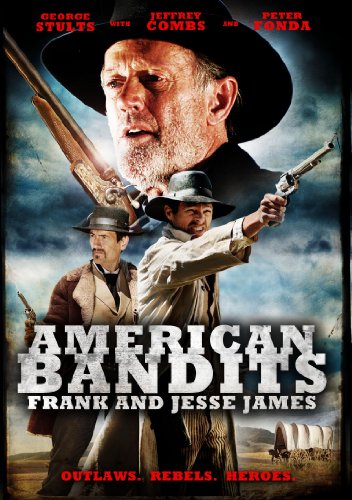 It was a straight-to-video affair – no one would have given it a theatrical release – directed and written by Fred Olen Ray. Mr Ray’s early career, the IMDb bio tells us, was filled with low-budget horror and science-fiction films, but when this market dried up he switched to producing so-called T & A videos of the type shown late at night on Showtime and Cinemax. Ray also wrestles, under the name “Fabulous” Freddie Valentine. He has said, “Making a film with no money or schedule is ten times harder than it is to make a big-budget show.” If you say so, Freddie; you’d know.

I don’t know what possessed Ray to make another Jesse James picture so soon after the art film The Assassination of Jesse James by the Coward Robert Ford (2007) but in any case Ray’s Jesse and Frank had nothing to do with the real ones. It’s some tosh about how they do a payroll robbery just after the war (they didn’t). The James gang attack a wagon carrying the Army payroll and murder the escort of troopers, but Jesse is wounded and Frank says they will meet up in a few days in a ghost town to divvy up the loot. Plausibility is not this film’s strong suit, I fear. But then strong suits are in short supply altogether.

At least in this one, though, Frank James (Tim Abell) is billed above Jesse and is definitely the boss. Jesse (George Stults) is wild and headstrong but defers to Frank. I didn’t know Mr Abell or Mr Stults. I don’t think they are leading figures of the Western genre. Perhaps they are in T & A.

Top billing, though, went to Peter Fonda, as ‘Marshal Kane’ – though no Gary Cooper he – but it was almost one of those vanity cameos, to get his name and photo on the DVD box, because he only appears briefly three times, to say his lines dutifully. His deputy does the actual work. It’s Deputy Burdette (Anthony Tyler Quinn, looking ever so slightly like Jack Palance).

Frank and Jesse stop in at a church where the pastor (not sure of the actor) and his granddaughter Mary (Lauren Eckstrom, very 21st century in appearance and diction), both Southern sympathizers, give them shelter. Mary digs the bullet out of Jesse’s shoulder, which seems to cure him immediately. 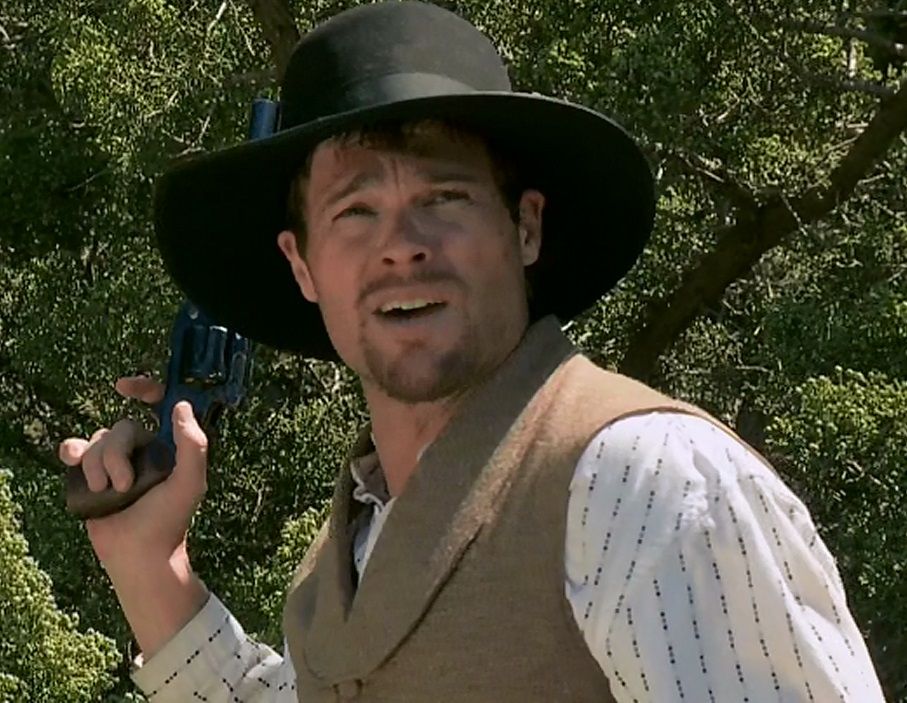 Next they go to a nearby town, also full of Reb sympathizers, where the doc (Ron Harper) tends Jesse’s wound while Frank sets off for the ghost town, now, however, inhabited by four odd types. There are base coward Jed (Randy Mulkey) who will do anything to get hold of Frank’s horse to escape the town, including pass over to him his wife/mistress Carrie (Siri Baruc), who does in fact take a shine to Frank. There’s also slick gambler Tyler (slick gamblers were obligatory in ghost towns), played by Ted Monte, and a crusty ex-Confederate soldier, Otis (Michael Gaglio). There’s a curious jump in the editing when these people appear.Well, Mary falls for Jesse right away, going from never having seen him before to proposing to him in five minutes, so both Frank and Jesse now have amours. It’s highly improbable and not well written.The rest of the James gang arrive, to share out the loot. One of them, Ed Bass (Jeffrey Combs) wants to kill Frank and Jesse and appropriate the contents of the strongbox all to himself. So a showdown looms in the town, made extra showdowny when Deputy Marshal Burdette shows up. There’s an extremely unlikely ending.The picture appears to have been shot on videotape and along with the occasional fades-to-black the whole thing has a very TV feel to it. The acting is not, I fear, very professional. The actors are all very evidently wearing costumes. There are Colt Peacemakers in the 1860s. I’m afraid amateurish is the word that springs to mind to describe the whole show.It was filmed in California but there are, weirdly, scenes of Monument Valley intercut, presumably from some other source. It’s a B-Western of the old school, an ultra-low budget bore. It has nothing whatever to do with Jesse James, certainly not the factual one but not even the mythical one, and it’s poorly staged, written, acted, photographed and directed. Otherwise I guess it’s splendid.

And then in 2015 we got a Canadian one, Jesse James: Lawman. Yup, that’s right, Jesse wears a star. 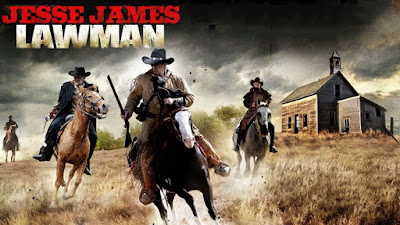 Brett Kelly directed and produced this picture, which has the look of a made-for-TV movie (perhaps it was straight-to-video, I don’t know) which goes for the old Little Big Man/Young Guns II wheeze of an elderly man being interviewed by a journalist and claiming that he is a famed Western figure from the past. Jesse was not assassinated by Robert Ford but staged his own death and disappeared to Brazil, he says. And he tells how he was once recruited by a sheriff to infiltrate a criminal gang and was a kind of deputy. In these days when conspiracy theories abound there are doubtless many who will be ready to believe that Jesse escaped death in 1882, just as those who believe that Billy the Kid, Butch Cassidy and Elvis are alive and well and living in Milwaukee.

This ploy doesn’t quite work, though, mainly because the man concerned is talking to the journalist in 1928, when, if he had been JW James, he would have been over eighty, but he is played by Kevin Sorbo, who at the time of filming was a sprightly 56 and looks younger.

The tale is therefore told in flashbacks, and a certain Andrew Galligan, who looks maybe to be in his twenties, takes the part of the young Jesse (on his own; there is no sign of Frank). That doesn’t work either, though, because this Jesse is involved with the Dalton gang, and the Daltons were active in the 1890s. Jesse had been dead eight or nine years by the time the Daltons were outlaws and even if he had survived Robert Ford’s assassination he would have been in his mid-40s. Oh well, never mind. Just being picky.

When I say this movie has a TV look about it I am referring to the rather ratty sets, the fades-to-black and the fact that all the characters wear their clothes unconvincingly: they are very obviously costumes. Still, I suppose the picture is no worse than those cheap B-Western Jesse Jameses of the 40s and 50s with the likes of Don ‘Red’ Barry as Jesse. And the producers did manage to get Peter Fonda back, 75 now, to play the fearful mayor. He had a bad costume too but at least he had a little four-barrel pepperbox derringer, so that helped.

The plot, such as it is, is the corny old one about a crook who has treed the town because he has discovered gold there and wants it all for himself. “Gold!” cries Jesse, looking at a secret map in an unconvincing studio ‘cabin’, as if he were in the cheapest of Poverty Row serials back in the 30s.

The crook is sadistic Hoyt Killian (the rather topologically-named John NE Hill) but in the end he’s quite easy for Jesse to overcome and he is left full o’ holes lying in a coffin, spaghetti style.

The Jameses and Daltons were sometimes supposed to be related in some way, distant cousins or something, and Jesse occasionally appears in Dalton movies, but in this one there is no sign of that. But even if unrelated, Jesse kinda respects the Daltons (only Bob and Emmett are there, and Emmett seems to be the senior one) and lets them go after shooting Bob.

Honestly, e-pards, this is pretty low grade stuff and you will miss little if you miss it. But as I said above, I guess it’s no worse than many big- and small-screen Jesses of yore. It’s certainly better than American Outlaws or American Bandits. But then that isn’t saying much.

Next time we’ll be saying farewell to Jesse James, with a brief summary. Until then, e-pards, happy trails.