As we have seen, Charlton Heston’s first two Westerns, The Savage and Pony Express (click the links for our reviews) were less than glorious affairs. The third, Arrowhead, was no better. As we have also seen, when reviewing Will Penny, Heston was capable of a fine Western performance. Perhaps he was just unlucky with directors and writers in his first few oaters. 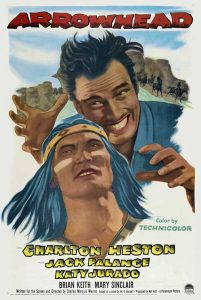 The director and writer of Arrowhead, which was another Nat Holt production like Pony Express, was Charles Marquis Warren, who had written Pony Express, and for Arrowhead he adapted the fine writer WR Burnett’s just-published novel Adobe Walls.

Warren moved from writing to directing as well and was involved in one capacity or the other (or both) in 21 big-screen Westerns, from Streets of Laredo in 1949 (rather good, actually) to Charro! in 1969 (probably the less said about that one the better). I quite like Cattle Empire with Joel McCrea (1958), but for me his best work was on the Lippert picture Little Big Horn (1951), which he directed and co-wrote, and Trooper Hook (1957), again with McCrea, which he directed but did not write (or at least was uncredited as writer).

The character of Ed Bannon was drawn in part from the actual Chief of Scouts of the United States Army of the Southwest – Al SIEBER. Born – 1855; killed – 1907.

I don’t know which part. This Bannon bears very little resemblance to Sieber, either in the facts of his life or the kind of man he was. In fact this Bannon is a racist murderer and a sadistic and bitter man, and Al Sieber was none of these things.

We are also told that the movie was shot in the “actual locale” of the events it describes, Fort Clark. Fort Clark is in Brackettville, Texas, and as far as I know Al Sieber never went there (and Dan L Thrapp, in his excellent biography of Sieber, does not even mention it). Some authorities, such as Herb Fagen in his Encyclopedia of the Western, have swallowed this fib and trot it out faithfully, if gullibly.

The movie-makers can’t even get Sieber’s dates right. He was born in Germany in 1843 or 1844, depending on whom you read, but certainly not in 1855. If he’d been born in 1855 he would have been ten when the Civil War ended, which would have made it hard for him to have participated in it for so many years. And saying “killed” implies that he perished at the hands of the Apaches, whereas he died in an accident.

As I have said before, I have no objection to unhistorical Western movies. They are not supposed to be documentaries. But when they claim to be historical and are clearly preposterous, then they lay themselves open to criticism.

Anyway. It’s supposed to be May 1886 – though The AFI film catalog says the fictional date is 1878, so it isn’t certain. The (fictional) Apache Toriano has been East to school but is now back to lead his people in rebellion against the white eyes. Toriano is played by Jack Palance, rather well. There’s a good bit when he takes his hat off to show that the whites have not been able to cut his hair. Ed Bannon, sour and churlish Army scout in Confederate gray pants (the real Sieber fought for the Union) creeps up behind two Apaches waiting for Toriano, says, “Turn around, dirt” and when they do he shoots them both dead with his rifle. Another Apache tries to get Bannon but Bannon’s sidekick, Sandy (Milburn Stone, Doc from Gunsmoke) shoots him too, so Bannon is saved.

That sets the tone of the film. A colonel (Lewis Martin) has been ordered to try to make peace with the Chiricahua but Bannon scorns the very idea. The colonel soon meets his maker. There’s a sensible officer, though, played very well by Brian Keith (one of his best performances, I think). Captain Keith has an on-off relationship with Bannon, despising him as a renegade who won’t obey orders, yet finally supporting him in his murderous intent. The sergeant is the excellent Robert J Wilke (only 1953 and already his 118th Western appearance; Arrowhead was one of eight in this year alone!), who is also a bit on the rough side but also comes round. Keith and Wilke make a convincing Army pair and, with the splendid Katy Jurado are the best thing about the movie. Actually, the casting is good.

Jurado, the year after High Noon, plays a half-Apache woman, the fort laundress Nita. Bannon uses her but mistrusts her, rightly as it turns out for she tries to kill him. Heston holds her down viciously, sneering at her through clenched teeth, “The Apache in you finally came out.” When she stabs herself, Bannon looks down at her body pitilessly and says to some soldiers, “There’s a dead Apache in here. Get it out.” Ms Jurado was voluptuous and sensual and utterly marvelous in the Westerns she did, which were, though, rather minor affairs after High Noon (except Broken Lance).

Toriano is no saint either, mind. He shoots down in cold blood his white blood brother (John Pickard), which is not very sporting. There’s an Apache Army scout, Jim Eagle (Pat Hogan, a Kickapoo who often played Indians in Hollywood and TV Westerns; he’d been Yellow Hand in Pony Express) though it isn’t clear for most of the movie which side he is on. He does not die peacefully in his bed. Sidekick Sandy comes to a ‘sticky’ end too and is made to look remarkably like medieval paintings of St Sebastian.

There certainly were vicious people full of hatred on both sides of the conflict but it is rare to have them portrayed so prominently on film, and even rarer for the viewer to be invited to sympathize with them.

Toriano urges his people to do the Ghost Dance (a predominantly Lakota phenomenon of the 1890s so I don’t know why the Chiricahua are doing it this early).

There’s a dramatically inevitable but rather absurd one-on-one mortal combat between Bannon and Toriano as the climax of the movie. You may guess who wins out. I was rooting for Toriano.

If you want a well-acted and interesting Al Sieber on screen, I recommend John McIntire in Apache (1954), Richard Widmark in Mr Horn (1979) or Robert Duvall in Geronimo: An American Legend (1993). All took liberties with the real Sieber, naturally, but they were far closer in spirit than the one in Arrowhead.

Arrowhead was at least nicely photographed in Technicolor by the talented Ray Rennhan in Texas locations.

The trailer is almost worse than the movie. It begins, “In the great Western tradition of the immortal Shane, Paramount NOW presents” (as if the two movies were even in the same league) “Arrowhead.”

“The least known of the Indian scouts was Ed Bannon, portrayed by rugged Charlton Heston,” announces the trailer, sonorously. Well, there’s a reason that Ed Bannon was the least known: he didn’t exist.  “Now the secret history of the Apache war is revealed for the first time!” shouts the trailer. “The most amazing story to come out of the West! All the more THRILLING because it’s TRUE!” This isn’t really just commercial hyperbole. It’s what’s called a lie.
As for Heston and Katy Jurado, “violence was to be his destiny, even from the women who loved him. Katy Jurado, the sensation of High Noon, as Nita, whose blood mingled the PASSION of Spain and the DEATH LUST of the Apache.”

All in all this is a rather toxic movie that is best avoided. One reader commented, “Just saw it on Irish television, with my kids, who were appalled.”

In some ways Arrowhead went against the trend. Pro-Indian pictures like Anthony Mann’s Devil’s Doorway and Delmer Daves’s Broken Arrow (both 1950) presented a much more nuanced picture of the frontier conflict between whites and American Indians, showing right – and evil – on both sides, and they had a real influence. But as Bosley Crowther in The New York Times said, “Whatever feelings of friendship for the American Indian may have been shown in a few open-minded Hollywood Westerns lately, it is plain that Producer Nat Holt is having no truck with any such ideas. To him, an Indian is still a treacherous dog. At least, he is in Arrowhead, Mr. Holt’s latest film.”

It didn’t do great things at the box office (it was the year of Hondo and Shane) but Holt pictures usually performed decently, and with the cast it had and Paramount clout it certainly didn’t flop.

Reviews were far from favorable, though. The New York Times said, “It is neither a pretty nor a captivating film. Mr. Heston makes an unappealing hero and Jack Palance makes a dour Apache brave. Katy Jurado is slinky and sultry as an Apache fifth column at the cavalry post and Brian Keith is conventionally rakish as the captain of the cavalry troop. The scenery is occasionally pretty. That’s about all that can be said.” More modern reviews have not been kinder.

Heston now avoided the Western for a couple of years, returning as William Clark in 1955 with Fred MacMurray as Meriwether Lewis in the Rudolph Maté-directed ‘historical’ drama The Far Horizons – but for that, come back soon!