A whodunit set in the American West

Next in our season of Dean Martin Westerns is one he made for Hal Wallis at Paramount in 1968, the same year as Bandolero!, our last review, and between a couple of Matt Helm movies. 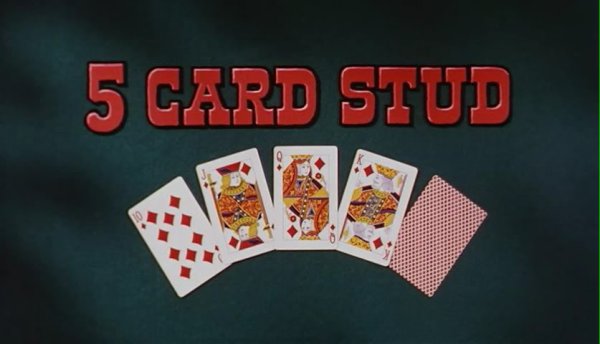 The picture had a pedigree and really should have been pretty good. Wallis was no mug, and the film was directed by Henry Hathaway, no less, and if anyone understood Westerns, Hathaway did. Furthermore, it was written by Marguerite Roberts, who so brilliantly adapted Charles Portis’s novel for True Grit the following year and would yet again team with Wallis and Hathaway for Shoot-Out with Gregory Peck in 1971.

And paired with Dino (though Martin got top billing) was one of the great actors of the time, and old Western hand, Robert Mitchum. 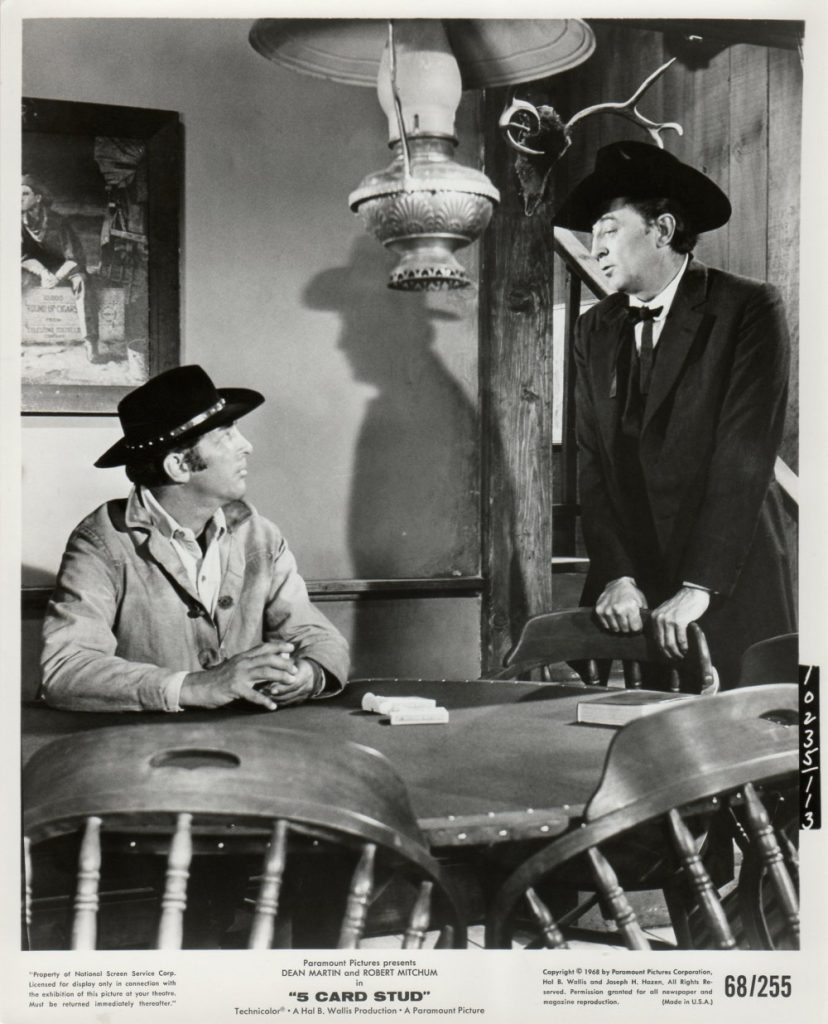 Backing up this duo was a range of character actors Westernistas were very familiar with, the likes of John Anderson, Denver Pyle, Whit Bissell and Ted de Corsia.

It was 103 minutes of Technicolor. Daniel Fapp (The Far Horizons) was at the camera and there were Durango, Mexico locations. Maurice Jarre (Lawrence/Zhivago) wrote the score.

Yup, it ought to have been good.

I saw at the time it came out, I remember, but never again until a recent re-view. I remembered an amazing amount of it so it must have made an impression on me at the time (I would have been 19 or 20). Now, though, I fear I don’t think it’s that wonderful…

Well, one has seen worse. Actually, despite the title, 5 Card Stud isn’t a poker movie at all, not like, say, A Big Hand for the Little Lady (Warner Bros, 1966). Hardly any card-playing goes on. It’s not even a Western really, except tangentially. It’s a (rather predictable) whodunit set in the American West. Wallis had produced a noir, Dark City, in 1950 and had decided to remake it as a Western.

We are in Rincon (California, presumably), 1880. While a professional dealer is briefly outside, ahem, otherwise engaged, five gamblers he had been playing cards with lynch the sixth, a tinhorn from out of town whom they accuse of cheating. The hero is mortified. But not as much as the gamblers are because one by one they are found murdered. Now, a preacher has arrived in town. I’m afraid you don’t have to be Hercule Poirot to put two and two together, and it’s a fatal weakness of the movie: we know whodunit. Yup, the preacher turns out to be the dead man’s brother (this is kind of a spoiler, I guess, but it will be so obvious to you anyway) and is out for revenge. He happens to be a crack shot too. He says he is backed by “God and Mr Colt.” 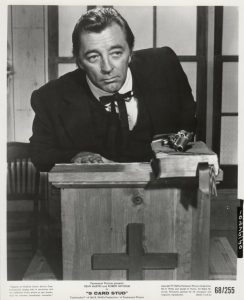 The trouble was, Hathaway didn’t really give a damn. But he was enthusiastic compared with Martin and Mitchum, the most famously insouciant actors Hollywood had. They sleep-walked through the whole thing. Mitchum used to say they painted eyeballs on his closed lids. Martin was clearly also just going through the motions to get to the end of the shoot. Perhaps Wallis and the writers were going for the crazed preacher vibe from The Night of the Hunter with Mitchum in a black frock coat. If so, they didn’t get it. In Hunter Bob provided true menace and absolutely superb acting. In this commercial vehicle he just recited the (indifferent) lines, with Dino doing the same in riposte.

There were other weaknesses. Brit Roddy McDowall hams it up unmercifully as the weird son who instigates the hanging. He had a bit part in The Life and Times of Judge Roy Bean four years later but did nothing else of note Western-wise. It’s perhaps unkind to say he didn’t have a clue but really, he didn’t have a clue.

Dino hovers between Inger Stevens (blonde madam of a barber shop – don’t ask) and Katherine Justice (Roddy’s sis), both of whom have set their caps at him. Katherine’s and Roddy’s father is about the best actor. It’s Denver Pyle. Now I love Denver, who doesn’t, and he was a stalwart of countless (well, 142) Westerns, but I don’t think anyone would call him Oscarable, in all honesty, do you? So if he was the best actor on the set, well…

The music is not exactly of Jarre’s best quality. In fact is downright irritating. Dino starts us off with a (naturally) quite beautifully sung title song (the man was a musical genius) but unfortunately Jarre worked the ditty to death in orchestral variations throughout the movie till you almost wanted to turn the sound down.

As I said at the beginning, I’ve seen worse. Much worse. But I don’t think any of the principals would claim this as a great Western. It was a payday, only.

The IMDb database says that there was no chemistry at all between the leads. “Martin stayed in his trailer all the time watching television when they were not filming, and the critics felt he had just phoned in his performance.”

It wasn’t even all that much of that. Bandolero! got to 17th in the box-office rankings that year, grossing $12m. 5 Card Stud was even beaten by Shalako.

Vincent Canby in The New York Times thought it was just one of a spate of ‘buddy movie’ Westerns that were doing the rounds: “Yesterday 5 Card Stud opened at neighborhood theaters with Dean Martin, who is currently in Bandolero with James Stewart, co-starred with Mitchum, who can also be seen on local screens with Yul Brynner in Villa Rides. Without important exception, all of these titles, stories and settings are interchangeable, to say nothing of the stars, some of whom are beginning to look as if they’d been hatched from dinosaur eggs.” He said, though, that the public enjoyed it: “The packed — if always restless—audience at the 42d Street Lyric Theater yesterday morning gave uproarious approval.”

Variety thought that the “dramatic buildup suffers thru a premature disclosure of killer’s identity and subsequent lessening of what should have been more potent impact”, which was putting it mildly.

Roger Ebert was politer: “Five Card Stud is not a great movie, but it’s a polished, professional one.”

Here’s a truly amazing fact for you: Mitchum turned down the role of Pike in The Wild Bunch to do this movie instead. Well, he said, they were both Westerns, weren’t they? That is so Mitchum.

Of course Mitchum was great even in a trance and Dean Martin was just so damn cool. Then there’s Mitchum’s derringer hidden in a bible. So you gotta watch it. But I reckon it’ll be another fifty years before I see it again. Oh, wait a minute… 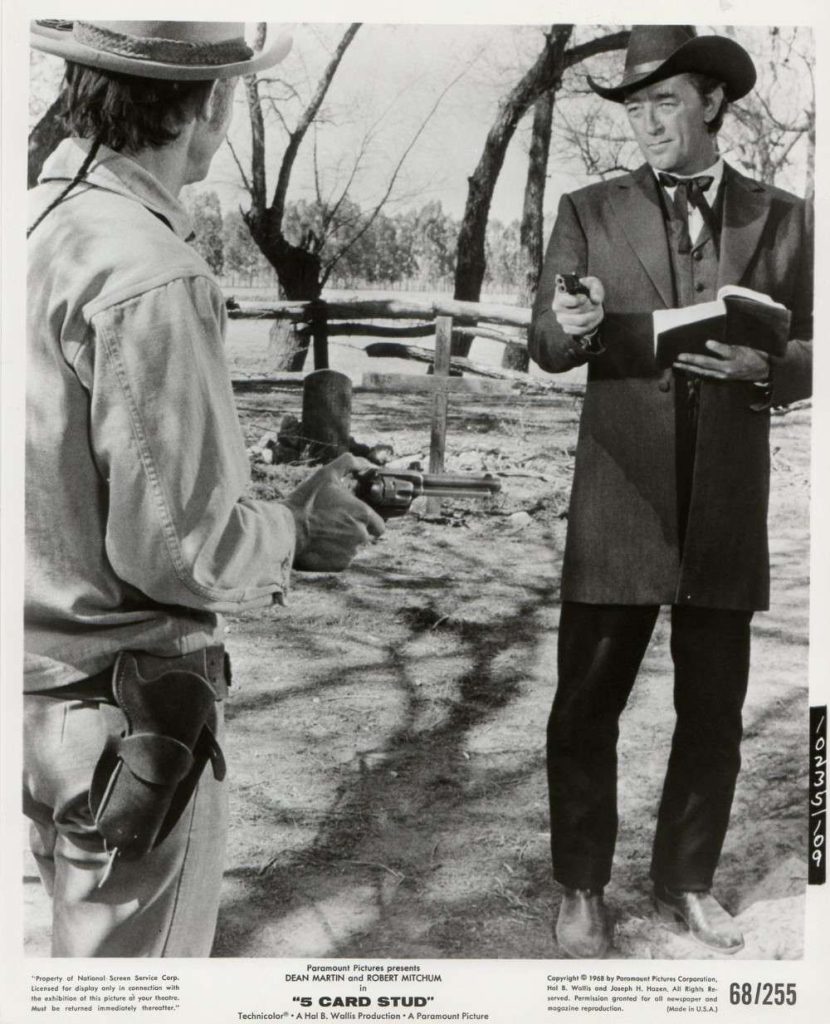