Absurd as biopic but a lot of fun

Kit Carson (1809 – 1868) – click here for our essay on him – had such a fascinating, full and action-packed life that I always find it odd that Hollywood had to invent episodes in his life, often absurd ones. Surely the true story was exciting enough? But poor old Kit has suffered from even more celluloid (and dime novel) misrepresentation than Jim Bridger, Wyatt Earp, Jesse James, Billy the Kid and all the rest. 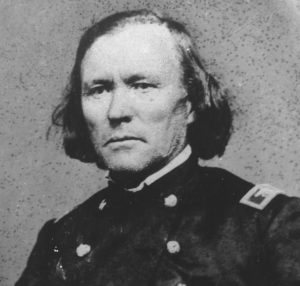 This movie’s Kit, Jon Hall (Victor McLaglen, Randolph Scott, Joel McCrea and Henry Fonda were all considered for the title role) was a handsome sort of fellow but not much of an actor. The New York Times review said that “Jon Hall’s Carson is less of a frontier pathfinder than an Eagle Scout from Troop D.” Luckily, the George Bruce script he had to work with was so clunky that no one really noticed. The whole picture Kit Carson comes across as dated and melodramatic, like an early 1930s talkie. 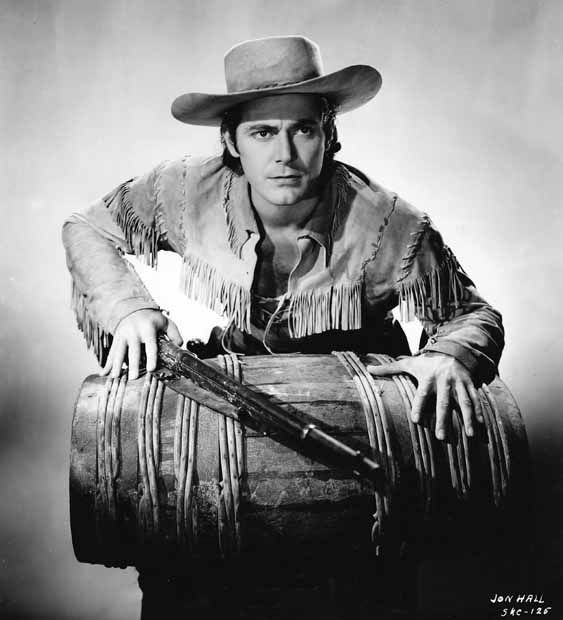 The early part of the picture is certainly the best, as we are introduced to the three compadres Kit (Hall), Ape (Ward Bond) and Lopez (Harold Huber) as they fight Shoshone who, horrors, actually have guns. It turns out that the wicked Californian Mexican Governor Castro (played as a total pantomime villain by C Henry Gordon) has been arming the Indians with Spanish muskets. The three now go to Fort Bridger (“last outpost of cvilization”) and encounter their old pal Jim Bridger (Raymond Hatton, in a short but highly colorful cameo) as well as a rather straitlaced, by-the-book Captain Fremont (Dana Andrews), who engages the three as scouts to lead a wagon train to California. It’s odd because the captain seems desperate to hire them but once he has, he won’t listen to them.

There’s a glamorous lady on the wagon train, obviously, Dolores Murphy (Lynn Bari). She turns out to be a dab hand with a musket.

They fight their way over the Sierra, Kit’s savvy advice winning out over Fremont’s military manual, and arrive in California, where another story now begins as they set up the California Republic and foil Castro’s dastardly plan to murder all the Americans in California and burn their haciendas.

Meanwhile, Kit and Fremont vie for the hand of the lovely Dolores… 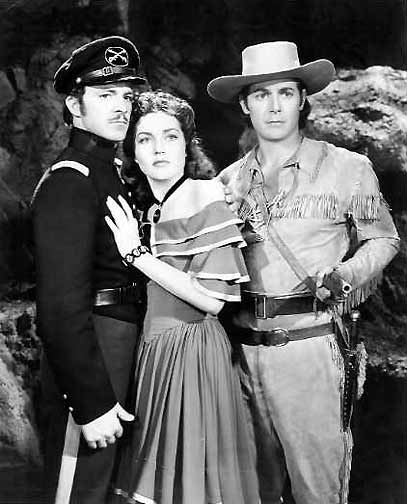 Well, it’s a farrago of nonsense, of course, and any resemblance to the truth is purely coincidental. Still, it’s a lot of fun and Andrews’s upright Fremont and, in particular, Bond’s wild Ape, a part ideally suited to the roistering Ward, enliven proceedings no end. Ape has been in Australia and his anti-Shoshone weapon of choice is a boomerang

Ironically, the whole shoot was done in Monument Valley, home of the Navajo – the Navajo who suffered so terribly at the hands of the real Kit Carson. I wonder if they thought of that. 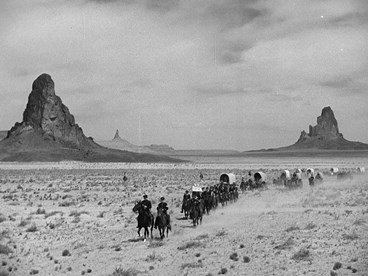 The movie was produced by Edward Small so we get the amusing opening frame of a giant, mountainous logo announcing ‘SMALL’. It was directed by George B Seitz, whose last Western this was. He had started on silent oaters in the 1920s and had directed the Randolph Scott Last of the Mohicans in 1936. He did a good job, with sweeping vistas, nicely photographed by John Mescall and Robert Pittack, and lots of action.

Clayton Moore (who sounded like the Lone Ranger even then) is the brave leader of the settlers who sacrifices himself to save the wagon train. Jay Silverheels was an (uncredited) Indian, so the Lone Ranger and Tonto met quite early. And silent movie hero William Farnum is the noble and brave hacienda owner. He had starred in the first version of The Spoilers in 1914 and he made 62 Westerns, right up until 1952.

Kit Carson is historical tosh. Bosley Crowther in The New York Times said, “The film is hardly a character study of our buckskin hero and only very incidentally history. It’s also a dated-looking melodrama.” he called it “a straight old-fashioned action picture with more violent mayhem per linear foot of celluloid than we’ve seen in recent weeks.”

But it has several qualities and is quite a lot of fun.

It was remade in 1961 by producer Robert Kent with Jim Davis as ‘Jim Stockton’ and Don Kelly as ‘Lt. Kilpatrick’.