Not a dud but it never sparks

Red Canyon was a Universal Western of the late 1940s. It had some plus points. It was shot in nice Kanab, Utah locations with Technicolor Three-Strip Camera by class act Irving Glassberg, it was based on a Zane Grey tale, it was directed by safe pair of hands George Sherman and it had an excellent supporting cast which included John McIntire, Edgar Buchanan, Chill Wills, Jane Darwell and Lloyd Bridges. Denver Pyle and Hank Worden have small parts too. 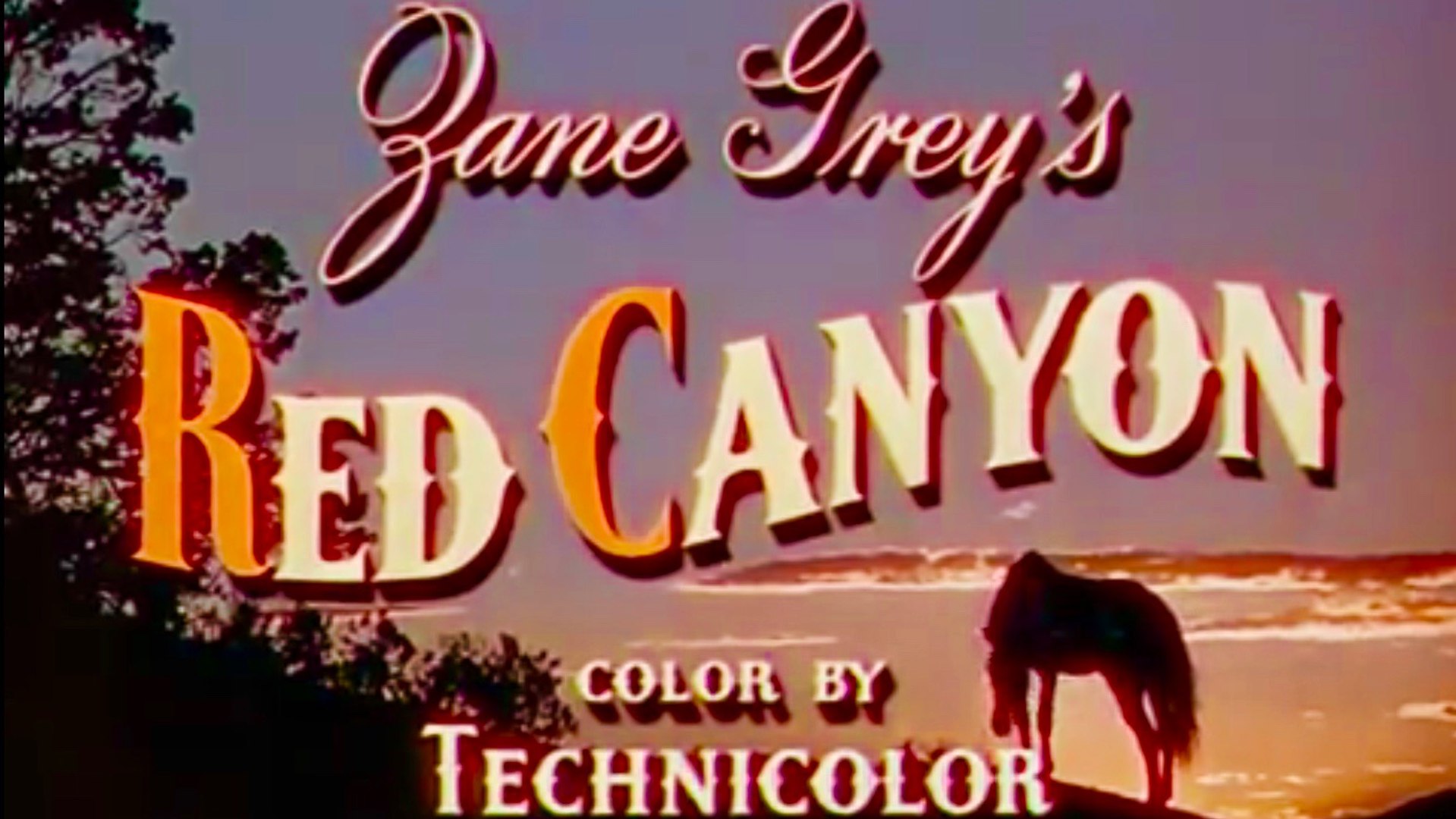 However, the story was yet another capture-the-wild-stallion yarn and the picture never recovers from its weak leads.

It sometimes seems that every Western star had to do a picture about roping and taming a fine wild horse, usually in a canyon, with, of course, skullduggery and bad guys mixed in. In fact Universal re-used footage from this picture in its Joel McCrea version Black Horse Canyon (with the same plot) in 1954. I always root for the horse and hope he gets away but there are always people who can’t stand to see a noble creature run free. This one, named by the whites Black Velvet, is said to be “a killer” and this somehow justifies his capture. 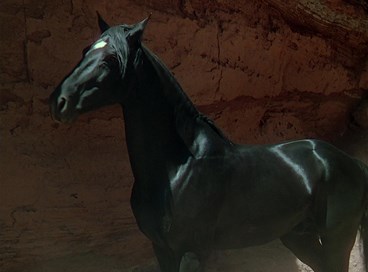 Unfortunately, the cast was topped by Ann Blyth and Howard Duff. 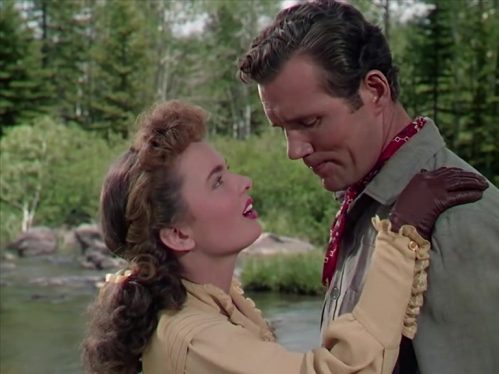 Blyth, called in the IMDb bio a “petite American film and musical star”, didn’t do Westerns; her only other one was the 1954 comedy/musical  Rose-Marie with Howard Keel, if you call that one. She doesn’t sing in Red Canyon but she doesn’t convince at all as the feisty daughter willing to defy her daddy (George Brent) to break the stallion and win a horse race on him. She looks incredibly 1940s in costume and cosmetics and spends most of the picture wearing a sort of rectangular grin on her face, even when riding Black Velvet (though of course she doesn’t ride him; she just bounces up and down on a wooden horse in the studio with back-projection). 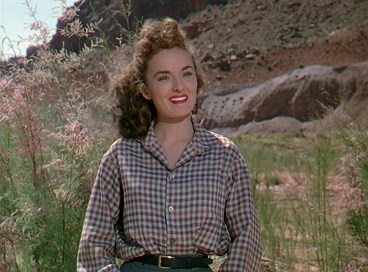 As for Duff, he of the weird eyebrows that gave him a forlorn look always, soon to be Mr Ida Lupino and a Hollywood big wheel, he was at the time Sam Spade on radio but moving into movies, with a Universal contract. He did two Westerns that year, paired in this one with Blyth and in the other, Calamity Jane and Sam Bass, with Yvonne De Carlo. That was also horserace related. Both were directed by Sherman. Duff would later take the title role in Black Jack Ketchum, Desperado (1956). He did seven feature oaters in all. Most were more on the romance end of the Western spectrum, if you know what I mean. He was, as Erik Maurel has said, “sans aucun charisme” and was pleasant enough but never a successful tough Western lead. 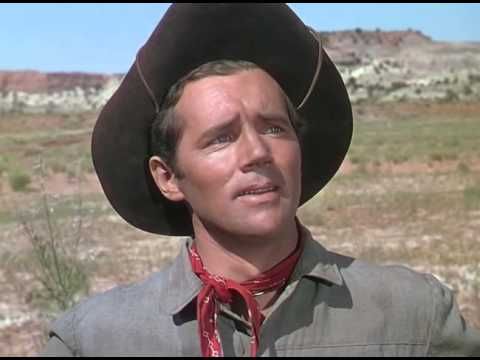 It was a pity, really, because with stronger leads Red Canyon might have been a half-way decent picture.

They play it on the edge of a comedy Western. It’s certainly light-hearted anyway, and they don’t go for tension or menace. 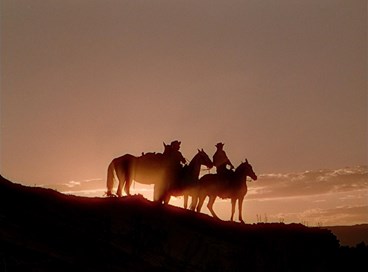 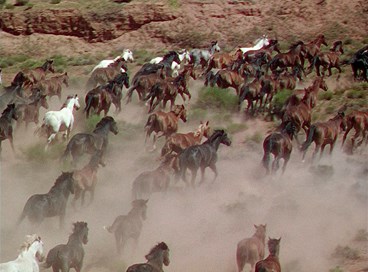 McIntire is the stand-out, in only his third Western. He plays the rascally outlaw chief, father of Duff (who wants to go straight). Actually, he was barely older than Duff. His other son, Duff’s brother, is Lloyd Bridges, giving it plenty as the white-trash no-good punk (he tries to whip Black Velvet). The plot thickens when it emerges that it was McIntire’s clan that was responsible for the death of Blyth‘s mother, yet here are Blyth and McIntire’s son Duff falling in love… 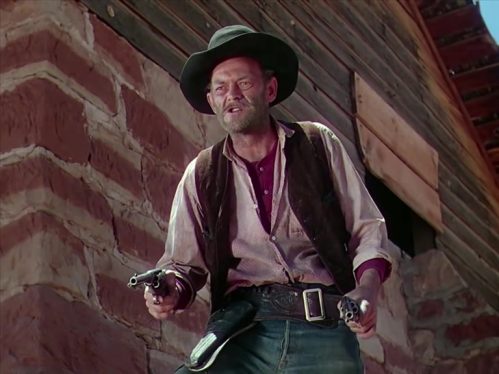 Buchanan had one of his favorite roles as the stage driver, a crusty/comic old-timer, though he was only in his forties. Chill is the local town marshal. Darwell is ‘Aunt Jane’, also giving it her all, though when you hear what she says you would quite like to punch her.

One good thing: they release the horse back into the wild at the end. Probably for Joel McCrea to capture.

Lovers of horsey family movies would be better off with My Friend Flicka or National Velvet.