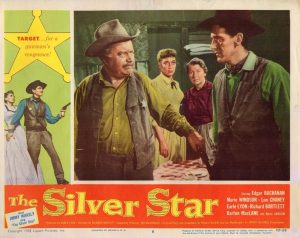 The Silver Star is, on one level, just another short black & white oater produced on a very low budget and released by Lippert. Robert L Lippert, as you probably know, was the owner of a chain of movie theaters and drive-ins who resented the prices the studios charged to screen their products and in 1945 decided to start making  films himself. His first was a Western, with Bob Steele, and he went on to put out movies of all kinds but especially Westerns, to fill his programs as cheaply as possible. The occasional one was actually rather good. Take, for example, Little Big Horn in 1951, with John Ireland and Lloyd Bridges.

For The Silver Star he worked with producers Richard Bartlett and Ian MacDonald. MacDonald had famously been Frank Miller in High Noon, and was also Geronimo in Taza, Son of Cochise, but he moved into producing as well. He and Bartlett set up a production company together, L & B, and a few months after The Silver Star they made another Western, The Lonesome Trail, with Wayne Morris in the lead. They worked together on the story and screenplay.

As for Bartlett, he acted and wrote but was keener on directing, and in one capacity or another – sometimes all three – he would be responsible for a number of 50s Westerns, some quite good, such as the Jock Mahoney pictures Joe Dakota and Money, Women and Guns. In The Silver Star he plays the chief villain, the gunman King Daniels.

Bartlett and MacDonald were joined by friend Earle Lyon, a B-movie sci-fi actor really, and Lyon appeared in the Westerns. In fact in The Silver Star he is the central figure, a sheriff, Gregg Leech, who appears to have lost his nerve in the face of three gunmen paid to kill him, but who finally gets it together and shows true grit.

Although Lyon clearly had the central role, the picture did in fact have a different actor topping the billing and it is unusual in that it was the only time that the great Western character actor Edgar Buchanan led the cast. I am a lifelong Edgar fan. He was always best in semi-comic roles and did a brilliant scoundrelly sheriff or, especially, judge.

It is a mark of the production values, I’m afraid, that they could even spell Edgar’s name right in the credits; he is billed as ‘Edgar Buchanon’, and heavy Barton MacLane too was mis-billed as ‘McLane’. Still, it was a good part for Buchanon/Buchanan. He plays the former sheriff, Bill Dowdy, who has retired and is glad to be out of the business. He promoted Leech to replace him. When the bad guys come into town, he tries to give Leech some backbone, and when he fails, he pins the old star back on.

There was no accustomed Buchanan levity to the role, and in fact the whole picture is somber and dark, and isn’t exactly a bundle of laughs.

Leech has a fiancée, Karen, and it’s our old pal (and Lippert regular) Marie Windsor. She sees that Leech is a very reluctant lawman. He doesn’t want to make a career shooting people. He wants to settle down and raise a family. But she’s one of those girlfriends who says she couldn’t live with a coward, and keeps on urging Leech to go on down to the saloon and shoot it out with the gunmen. He is finally nagged into it. You should see the smile of relief and glee on her face when he finally kills someone. She’s so pleased.

Much of the action (well, more inaction really) takes place in the saloon of Karen’s dad, who is our old friend Morris Ankrum. He is afraid of the three gunmen in his bar and does their bidding. The camera does spend a lot of time (economically, budget-wise) in the saloon as the badmen wait for their quarry to arrive – they have classically given him till sundown to fight or leave town – but don’t expect anything like Gregory Peck in The Gunfighter here. It’s much less tense and less interesting than that.

But who paid these gunmen to come and root out the new sheriff? Well, you don’t have to be Hercule Poirot to guess who the guilty party is. In fact it is blindingly obvious from the first reel on. It’s Lon Chaney Jr, doing another Western. He plays a smarmy lawyer in a gray suit, and he ran for sheriff against Leech but lost, so now he has brought in henchmen to remove the upstart more permanently. He is in cahoots with the liveryman Longtree (MacLane). Poor Lon, he really couldn’t act very well. I thought he was memorable as the arthritic ex-marshal in High Noon but I can’t think of a single other Western he was good in. Maybe I missed one. I was a keen follower of Hawkeye and the Last of the Mohicans on TV as a boy so for me Lon will always be Chingachgook.

To be brutally frank, dear e-readers, The Silver Star is pretty low-grade stuff. Of course you have to watch it for Edgar Buchanan but you probably wouldn’t want to otherwise, and even I wouldn’t really want to watch it again…