Rocky Mountain was Errol Flynn’s last Western feature. Flynn was one of the most glittering Hollywood figures of the late 1930s and early 1940s, though his star had waned somewhat since then. Substance abuse and his philandering had seen a sad decline in his capacities, and his public appeal was no longer what it was. The 1943 rape trial certainly didn’t help. But despite Flynn’s own initial skepticism, Westerns had been a bankable proposition since Dodge City in 1939 and maybe Flynn (and Jack Warner) thought that another couple at the turn of the decade might restore his box office viability. And to be fair, whether Flynn got himself in shape or lighting and make-up personnel managed to disguise things, or both, he did look pretty good in the two late oaters. He was certainly stockier and more lined but he was pushing forty after all and was entitled. And he played slightly older, wearier characters. I think he continued to convince in the genre. 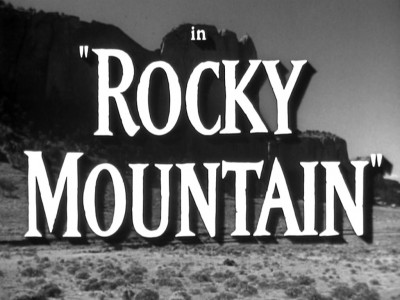 The picture benefited from high Warner Brothers production values and an excellent supporting cast. In particular, a superb score by Max Steiner (again) added emotional depth. Though notionally set in California, it was shot around Gallup, New Mexico by Ted McCord, the Treasure of the Sierra Madre guy, and while some viewers might have been disappointed not to have Technicolor, McCord did a wonderful job with the black & white, which in any case probably added to the somber tone of the movie. And after all, 1950 was the year of great Westerns like Anthony Mann’s Devil’s Doorway and Winchester ’73, and they were in black & white. Warners sound was also famously good. 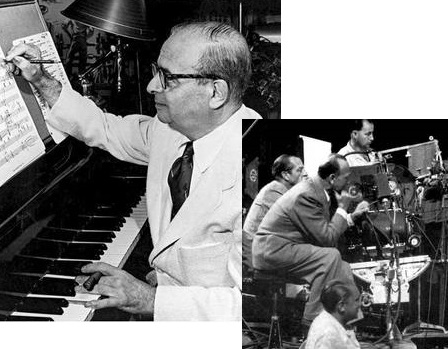 All this comes across well on the excellent DVD from Warners Home Video, which benefits from a voiceover commentary from Thomas McNulty, author of the enjoyable biography of Flynn that I have just read, Errol Flynn: The Life and Career. I don’t normally care much for these special feature commentaries on DVDs, which mean you have to watch the movie all over again but can’t really because the dialogue fades out in favor of the commentator, and the commentaries are sometimes frankly dreary, but this one is good and gives real insight into Flynn and the movie. 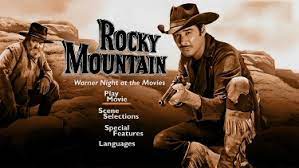 Another very strong point of Rocky Mountain was the writing, by Winston Miller and Alan LeMay, no less, the former of My Darling Clementine fame and the latter fine as both novelist and scenarist, notable, later, for The Unforgiven and The Searchers. The plot of Rocky Mountain, which Miller based on the LeMay story Ghost Mountain (the working title of the film), is somewhat traditional for the genre but the script is high quality and succeeds in establishing atmosphere and delineating and developing character.

The picture was directed by Flynn friend William Keighley (pronounced keely) whose last movie three years later, The Master of Ballantrae, would also be an Errol Flynn one. Keighley, pictured below with friend, had worked with William Dieterle on Flynn’s The Prince and the Pauper and with Michael Curtiz on The Adventures of Robin Hood, in Flynn’s heyday, and though Rocky Mountain was his only Western, he clearly understood the genre and he did a solid job. As for the cast I mentioned, the picture marked the debut of two fine Western character actors, Slim Pickens and Sheb Wooley. Wooley became a drinking buddy of Flynn’s during filming. They play CSA soldiers on a last-ditch mission, sent by Robert E Lee (it’s supposedly loosely based on a real incident but…) to raise California for the Confederacy with the aid of sinister outlaw Cole Smith (an excellent Howard Petrie). It’s a plain-clothes affair and the clothes concerned are authentically patched and worn-out buckskins and such.

Also in the party, thoughtfully introduced by a Flynn voiceover, are Rush Williams, Peter Coe, Buzz Henry and, in the inevitable kid role, Dickie Jones, 23,  who will forever be, for me, Dick West, Jock Mahoney’s boy sidekick in The Range Rider. They are bossed by Captain Flynn’s second-in-command, a bearded old-timer, perhaps the greatest Flynn drinking buddy (with Alan Hale anyway), Guinn ‘Big Boy’ Williams (who would be a pall bearer at Flynn’s funeral when he died, aged only 50, in 1959).

The picture is also notable for the leading lady.  Lauren Bacall was assigned the role but refused it, and Warners suspended her as a result. She later said, “I turned it down because it’s just not a part. It’s kind of nothing. I’m not angry, I’m just incredulous. I’ve never been offered a role like this before. I don’t want to do it and they shouldn’t have to pay me. I shouldn’t imagine they’ll have any trouble replacing me.” The studio in fact replaced her with Patrice Wymore, with whom Flynn fell in love (though he was engaged at the time) and who would become the third and last Mrs Flynn between the movie’s wrap and its release. Wymore plays the fiancée of a Union lieutenant and she causes most of the trouble by coming out West to find him. In a classic scene for a Western, well choreographed too, Indians (Shoshones, played by local Navajos) attack the stagecoach she is traveling on, which is driven at breakneck pace by good old Chubby Johnson – or his stunt double anyway. Wymore actually does a good job with the role, managing grace and decency in equal measure. There’s no romance between her and Flynn, beyond the suggested hint of attraction. She is in love with her Army fiancé and does not waver there. Warners tried to plug the love interest in their advance publicity, but there wasn’t any. 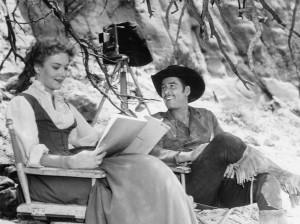 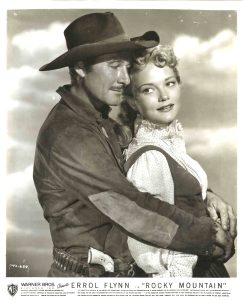 The lieutenant is played by Scott Forbes, an Englishman known at the time for the title role in ABC’s The Adventures of Jim Bowie He too does a sound job as the straight-up officer. Really, he is the film’s good guy: Flynn is, yes, the hero, but his character has a dark edge. For example, he does not scruple to shoot one of the Union soldiers he has captured, and when he threatens to do the same to the lieutenant if he tries to escape, you can tell he means it. Rocky Mountain is the darkest of the Flynn Westerns. 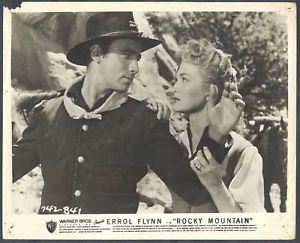 Yakima Canutt, by the way, is a Union trooper. He was stunt coordinator and worked with Buzz Henry.

A leading character actor is Spot, Dickie’s dog – tragically uncredited – who gets his own music from Steiner whenever he appears, a fast-paced bit on flutes and piccolos, for he is a nippy little job. There’s a bit at the end where he whimpers on the body of his master which could have been saccharine but in fact was rather well done.

Errol uses the same horn-handled 1873 Peacemaker he did in Dodge City, quite clever for 1865. He must have had an advance prototype. Similarly those with 1892 model Winchesters. The Spencer rifles and carbines the Rebs had looked authentic, though. Not that I’m a great expert on firearms.

There’s an amusing in-joke when salty old Williams says the only officer he ever saluted was JEB Stuart and Errol replies, “He must have been quite an officer.” Flynn of course plated JEB Stuart in Santa Fe Trail.

In the climax (spoiler alert) the gallant Rebs sacrifice themselves to save the girl and perish one by one at the hands of the horde of Indians (this is an unreconstructed Hollywood picture in which the Indians are still just nameless savages) and they all die with their boots on. Indeed, Capt. Flynn is the last to fall, most Custerishly, skewered by Indian arrows. He later said, “I never died so heroically.” The US Cavalry arrives too late, for once, but the decent Lt. gives the Rebs a funeral with full military honors and mournful Steiner treatment of Dixie, and orders the stars and bars to be raised on the Rocky Mountain of the title. Not only that, he adopts Spot, so you can tell he’s a goodie. 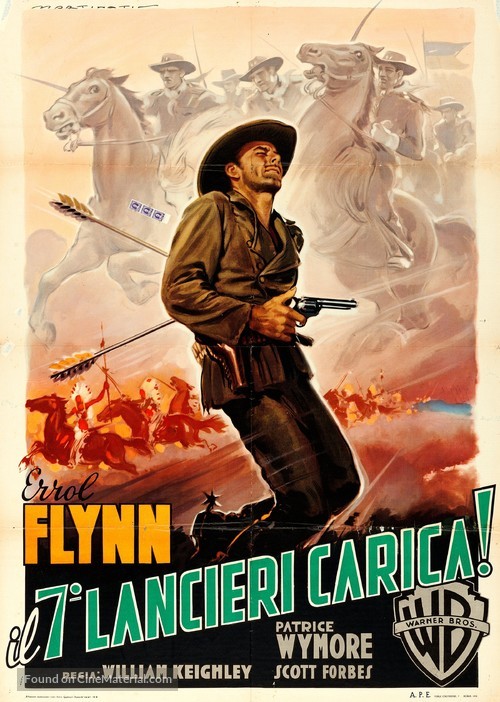 Bosley Crowther in The New York Times commented, “Needless to say, such heroics do not make much sense, nor do they make for much distinction in the historical qualities of this film. But they make for considerable bravado of a flag-waving, rebel-yelling sort as the gallant band makes its final gesture by riding headlong into the charging Indian horde.”

Rocky Mountain is in many ways a traditional, rather unoriginal Western, and clearly became another Flynn vehicle, but it’s still pretty good. In fact, according to Wikipedia’s entry on the movie, Flynn was given the lead role over Ronald Reagan, to Ron’s annoyance, as he felt he had brought the story to the studio. Reagan left Warner Bros soon afterwards. 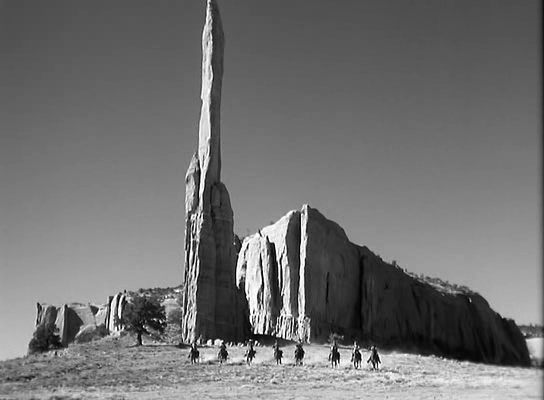 McNulty calls it “a solid, earnest little film” and that’s probably about right. Occasionally it rises above that, I think, and it definitely has its qualities, visually, musically and in its screenplay, as well as the acting. Whether he liked Western parts or didn’t, and McNulty says “he came to accept the fact that he was good at it”, Flynn was indeed good in the genre. This last one is the opposite of, say, San Antonio: he isn’t flamboyant and he doesn’t crack a smile. Or if he does, it’s a wry, weary, cynical one. But he’s entirely believable.

Reviews at the time were moderate. For example, the Los Angeles Times said “it comes so close to being an exceptional figure that no one could have been sorrier than this reviewer to see it fall short… the reason is, I think, the characterizations lack forceful definition.”

It did reasonable business. According to Variety, the picture earned $1.7 in the US by the end of 1950. But this was only a shadow of what earlier Flynn Westerns had made. By comparison, Fox’s Broken Arrow with James Stewart grossed $3.5m.

Critic Brian Garfield in the 1980s was very down on it, saying “this one may have been the worst” of Flynn’s Westerns, calling it “a trite adventure” and slamming the “very weak script.” Myself, though I often concur with Brian on Western movies, I can’t agree with that. I think it’s rather good.

I’m not alone. Filmink magazine recently called it “a hidden gem, one of Flynn’s best Westerns.” Thomas McNulty says that Rocky Mountain was an “emotional and touching conclusion” to Errol Flynn’s big-screen Western. 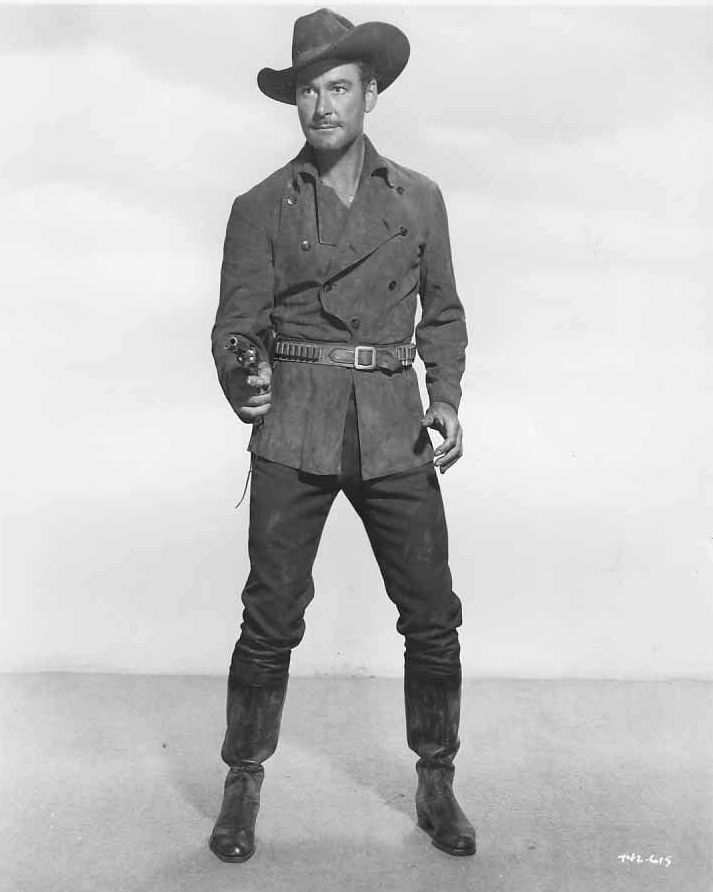 Our next post will be a ‘Flynnorama’, an overall look at Errol Flynn’s Westerns (he did a couple on the small screen too), so come back soon!