Errol Flynn, who had first reluctantly donned a Stetson and gunbelt in Dodge City in 1939, not at all sure that the Western was for him, had grown to like the genre. He did two more big, noisy ones with Michael Curtiz, Virginia City and Santa Fe Trail, then, when Flynn and Curtiz fell out, a few with Raoul Walsh, They Died with Their Boots On and Silver River (Walsh also did some scenes on San Antonio). They were all commercial and critical successes. By the new decade, though, Flynn was not the man he was. In Dodge he’d been a fighting-fit 30-year-old, used to athletic sword fights on the Spanish Main or in Sherwood Forest.  By 1950, though, he was in his forties, and a major substance-abuser, using opium, cocaine and morphine mixed with huge quantities of vodka and massive numbers of cigarettes. All the skills of the lighting men and make-up artists were required to make his appearance look even vaguely youthful. And he was no longer the major box-office draw he had been.

And according to Thomas McNulty, in his biography Errol Flynn: The Life and Career, “Flynn did not want to make Montana. His participation was due to his willingness to fulfill the obligations of his contract and because he needed the money.” But willing or not, Flynn had a last couple of outings in the saddle in 1950, Montana, then Rocky Mountain (our next review), his adieu to the genre.

Jack Warner had had Montana for some time, since 1941, in fact, and at different moments Gary Cooper and Ronald Reagan had been announced for the lead, but now Warner decided to give it to Flynn.  Walsh too had tired of working with the star and Warner assigned old standby Ray Enright to direct the picture. Enright went right back to the early days (he’d directed the silent Rin Tin Tin pictures). He was no Curtiz or Walsh but he knew his onions, as my grandma used to say, and he made a lot of oaters with Randolph Scott. One of them, Coroner Creek in 1948, was outstanding. He handled the action in Montana darned well.

The picture had classy writers working on it. Borden Chase, no less, of Red River fame, and James R Webb, the Cape Fear guy who wrote Cheyenne Autumn for John Ford, produced the screenplay with Charles O’Neal (Return of the Bad Men) and they used a story by Ernest Haycox. In the end Montana wasn’t as classy as that line-up might have led us to expect (I mean Red River it wasn’t) but it’s still pretty good, I reckon. At any rate it’s my kinda Western.

It’s the well-worn sheepman v cattleman plot. Errol is Morgan Lane, come up from Texas (though he says he is Australian, and that was true) to run sheep in Montana. The ranchers there, big and small, detest sheep and sheepmen. They say no cattle can live where sheep have grazed (though they provide no evidence for this assertion). And indeed, five riders descend upon his flock, murder one of his men and run down his animals (including a bleating lamb, to elicit the oh, poor thing response).

They come across a traveling peddler, Papa Schultz, and it’s SZ ‘Cuddles’ Sakall, Karl from Casablanca but from an Errol perspective Sacha from San Antonio back again. Lane becomes his partner, hawking patent medicines, as an excuse to enter the lion’s den, i.e. the cattle town of Fort Humbolt. 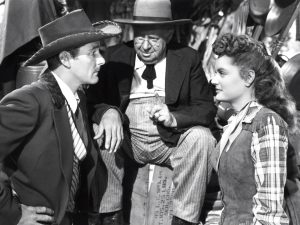 There he meets the glam cattle baroness Alexis Smith, also back from San Antonio, and indeed in her fifth (and last) teaming with Flynn. She has deliciously 1950 or maybe 1940s hair and bright red lipstick, and is pretty impressive all round. As it were. She thinks Lane is a cattleman looking for range and he doesn’t let on, so she leases him a tract of land. There’ll be hell to pay when she finds out what kind of stock he intends to run on that land, and in a twinkling she duly does. Range war erupts. 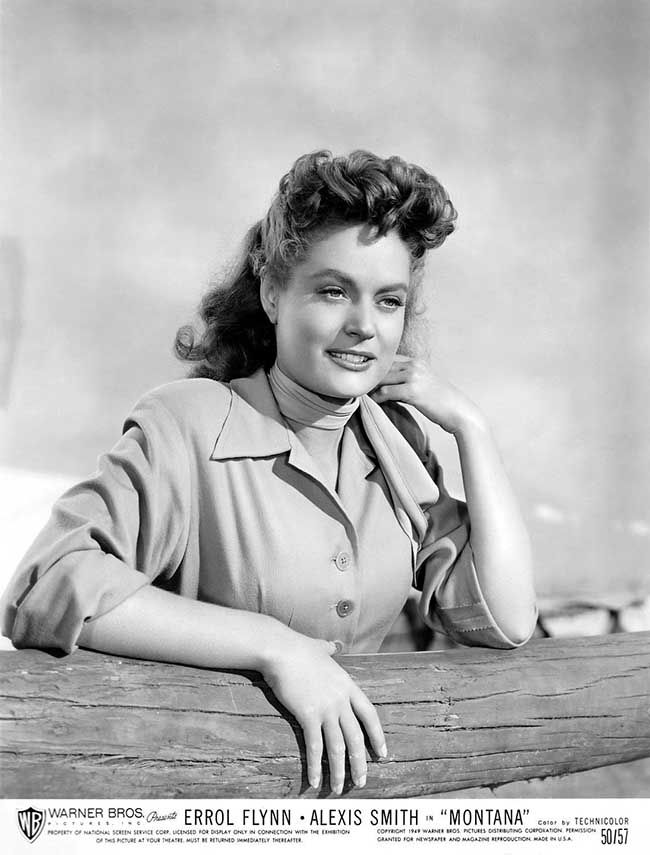 You can tell Errol’s a goodie because he’s nice to a dog in the first reel. It’s a sheepdog, you see, and that gives the game away.

The cattlemen going grrr include Ian McDonald, rather good as the skunkish Slim Reeves, whom Lane outdraws in the saloon, causing him to go even more grrr, as well as Douglas Kennedy as Ruthless Rancher Ackroyd. There’s a more reasonable cattle baron, Forsythe (Lester Matthews) who is ready to come to an accommodation with the mutton-herders but Slim shoots him, which takes him out of the picture (in both senses).

There’s an amusing old-timer obviously. They were compulsory in them days. It’s Tecumseh Burke, played by Paul E Burns. He’s on the baa rather than the moo side of things.

You might spot a brace of Buckos, Jack Perrin, Walter Bacon and Monte Blue among the townsmen. Quite a big part went to our old pal Lane Chandler, who plays the sympathetic sheriff who is no friend to sheepherders but can’t abide the way the arrogant cattlemen ride roughshod over law ‘n’ order.

I must say, to do Errol credit, either the lighting and make-up crew had done an exceptional job or he had really got himself in shape. He looks tanned and fit. McNulty says he went through his part “in a partial alcoholic stupor.” Jock Mahoney did all the strenuous stuff for him. He sings a song to Alexis, Reckon I’m in Love, accompanying himself on the guitar, though I have more than a sneaking suspicion that the chanson was dubbed. Fair enough.

There’s some nice Arizona and Warner Ranch scenery, shot in Technicolor by Karl Freund, and the picture looks nice. It was the last time Jack Warner would splash out on that, though. Errol’s last Western would be once more in black & white. There’s some jolly David Buttolph music.

It all climaxes in a big action scene in which the bad guys led by Kennedy stampede their cattle to trample the sheep. Kennedy even kills the peaceable sheriff. But it does him no good. He is, of course, trampled by his own cows. Lane, in triumph, runs his sheep right through town. There, he faces a Main Street showdown with a gun-totin’ Alexis… In fact in this final scene Flynn was too drunk to get to his feet. In his memoir Jack Warner wrote, “Errol was so crocked during the last scene that he insisted on playing it flat on his back. He refused to kiss Alexis – and you can bet she was kissable – and I could not make him back down.” They tried reshooting but in the final cut Flynn is still on the ground. He was just too drunk to carry on.

Using the name of a Western state or territory for a movie title was a tried and tested device at the time, as Wallace Beery up in Wyoming in 1940 and Bill Holden with Jean Arthur in Arizona proved in 1940, along with Holden again in Texas in ‘41 Bob Mitchum in Nevada in ’44, Roy Rogers in Colorado in 1940 and Utah (1945), Paramount’s California in ’47, and after Errol, the 1951 oater New Mexico, to name but a few.

Critics have been quite rude about Montana. Brian Garfield said, “the movie is slow, perfunctory, cheap and predictable – possibly the least of all Flynn’s Westerns.”

Burt Kennedy saw the film on its release in January 1950 (they premièred it in Helena) and said, “Nobody else liked it but I did.” Actually, Burt wasn’t accurate to say no one liked it. The picture grossed $3.6m on its $1.5m budget, so movie-goers were still up for a Flynn oater – though of course it couldn’t compete with the big Western of that year Winchester ’73. But anyway I agree with Burt on this one, not Brian. It’s a lively actioner, and, drunk or not, Errol Flynn comes across as charming and likeable, as he usually did.