Walter Mirisch and his brothers became hotshot Hollywood producers in the 1960s. The Mirisch Company won the Academy Award for Best Picture three times, for The Apartment, West Side Story and In the Heat of the Night. In the sacred domain of the Western, Walter had to his credit John Ford’s The Horse Soldiers with John Wayne, Man of the West with Gary Cooper and Wichita with Joel McCrea, among others, and he deserves his place in the western section of Valhalla for The Magnificent Seven alone. Ron Howard said, “Walter Mirisch produced many of the films which dazzled and inspired me … When I later acted in one of his (lesser) productions, The Spikes Gang, I learned that a prolific and brilliant producer could also be a terrific guy and a wonderful teacher.” 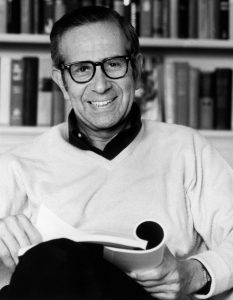 Of course Walter’s filmic origins were much humbler than major Oscar-winning hits. The first picture he produced was Fall Guy, a one-hour black & white crime drama directed by Reginald Le Borg and starring Leo Penn (Michael, Sean and Chris’s dad) in 1947, for Monogram. It was not exactly a blockbuster. Dear old Monogram had been churning out low-budget pictures since 1931. Much of its output had been cheaply-produced series Westerns, starring such screen cowboys as Bill Cody, Bob Steele, Tim McCoy and of course a young John Wayne.

But Walter Mirisch had bigger ambitions. He wanted to make A-pictures. He became assistant to studio head Steve Broidy and he convinced Broidy that the days of low-budget movies were ending and Monogram needed to move up-market. Mirisch was a prime mover in putting together Allied Artists, and in September 1952 Monogram announced that henceforth it would only produce films bearing the Allied Artists name. The Monogram brand name was retired in 1953, and the company was now known as Allied Artists Pictures Corporation. At a time when the average Hollywood picture cost about $800,000, the usual budget of a Monogram picture had been $90,000. AA’s first release, the Christmas-themed comedy It Happened on Fifth Avenue (1947), cost more than $1.2m.

Cavalry Scout, actually Walter Mirisch’s first oater, was a late Western movie of Monogram. But it was already more upscale than the humble second-feature fare of earlier years. It was a 78-minute picture in color. 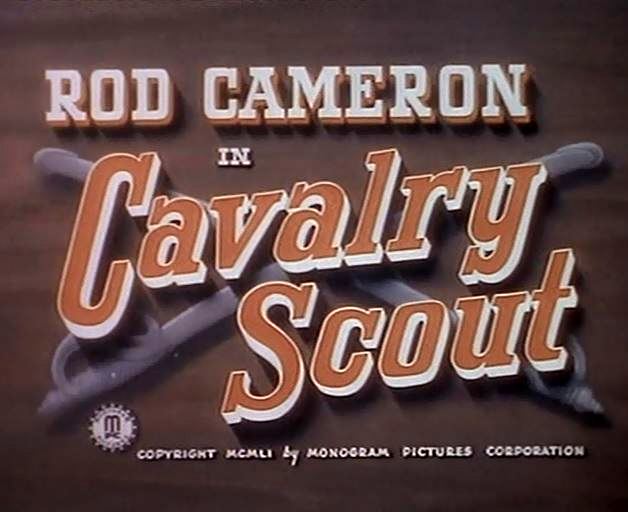 Cinecolor was a cheaper rival of Technicolor and it hasn’t survived as well. Tints faded with age. I actually rather like it because seen today, many Cinecolor movies have pleasant pastel shades, with suppressed primary colors. Cavalry Scout is a good example of this. It was shot by Harry Neumann. Harry C Neumann, sometimes credited as Harry Newman, was an old hand who went right back to the silent days and he photographed many of those talkie 1930s B-Westerns for Monogram. He wasn’t perhaps the most inspired of artists photographically but he did a solid job with the color and the Corriganville and San Jacinto locations.

Cavalry Scout was directed by our old pal Lesley Selander (see our homage to Les here). He worked on no fewer than 114 feature Westerns in one capacity or another, going right back to the silent days. As director, his first Westerns were two Buck Jones oaters in 1936 and he would later helm some really quite good ones, such as Fort Yuma, Fort Utah, Fort Vengeance, Revolt at Fort Laramie (he liked fort Westerns), Tall Man Riding and more. He directed a lot of Hopalong Cassidy oaters too. He did a steady job on Cavalry Scout, being always good at action scenes and keeping the pace up. 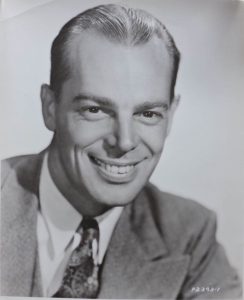 It’s an 1876 ‘peripheral Custer’ story, like, say, 7th Cavalry or Little Big Horn, written by experienced Western hand Daniel B Ullman, who was at the typewriter for 40 feature Westerns between 1948 and 1959, and wrote some strong ones, including many with Joel McCrea and several for Mirisch. I don’t think Dan wrote the intro voiceover of this picture, though, because that suggests that Sitting Bull was the big chief of all the Sioux and Crazy Horse was the head honcho of all the Cheyenne. Still, we don’t expect historical accuracy from Western movies, do we. Really, though, it’s not a cavalry Western as such, more of a traditional skullduggery one, with a gang of bad guys (including James Arness and John Doucette) working for slimeball John Millican who is selling guns to the Indians, and the good guy (sturdy Rod Cameron) thwarting their dastardly schemes. Many of the interior scenes have a cheap cabin setting and hark back to the old series Westerns of yore.

Still, there’s enough outside galloping about California with six-guns blazing to keep us amused.

The guns that the skunk Millican is providing to the Sioux and Cheyenne aren’t just ordinary ones, though the consignment does include 500 Winchester repeaters. Far worse, though, is the fact that he’s got his dirty hands on Gatling guns. If those fall into the red men’s hands, it’ll be bye-bye Custer. Well, it’s bye-bye Custer anyway but you know.

Now, we have discussed earnestly this thorny question of Gatlings in the Indian wars for some time on this blog, and a vital subject it is too. Did the Army use Gatlings against the tribes? If so, how much? If not, why not? An important debate, you will agree. 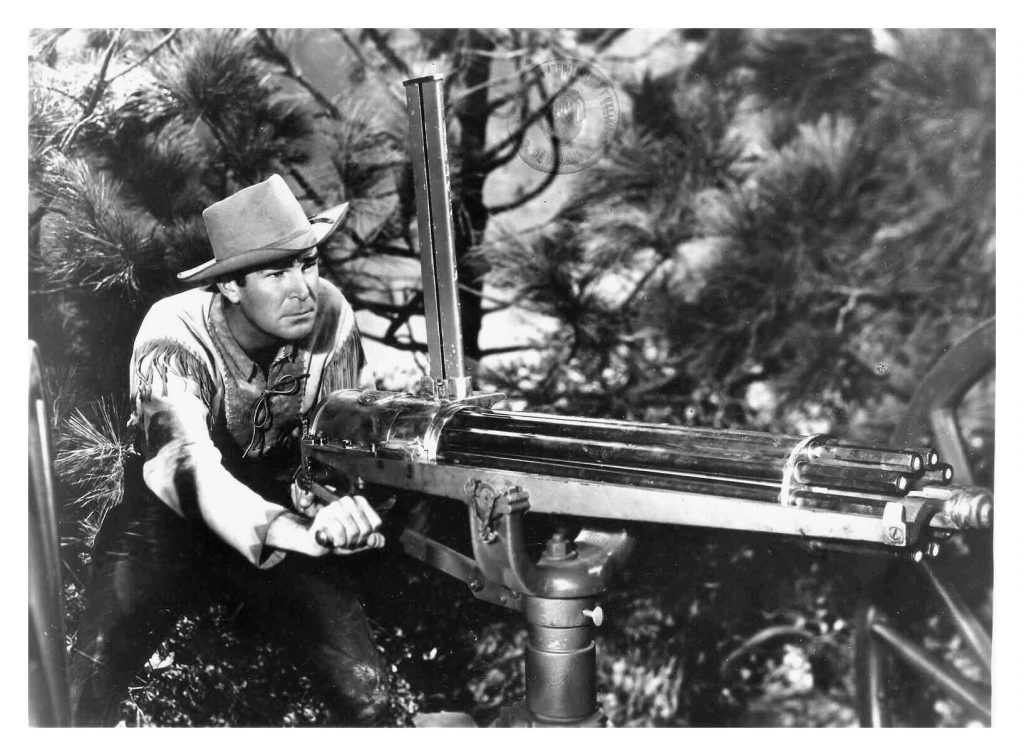 If the actual Army made limited use of the early machine-guns, Hollywood had no such compunctions. Western movies habitually featured Dr Richard Gatling’s invention and had plots about how awful it would be if the Indians got hold of one. Pictures such as The Gatling Gun, The Siege at Red River and others were based on this.

Cavalry Scout opens with a raid on a US arsenal in which three Gatlings are snaffled. General Sherman (Eddy Waller, mainstay character actor of Monogram and Republic B-Westerns, rather hamming it up, I fear) is distinctly worried and needs an intrepid scout, preferably in buckskins, to get those guns back, a man who knows Indians and the territory, who will stop at naught and triumph over all adversity, you know how they do, and who else should that be but Kirby Frye (tall, tough and taciturn Rod Cameron, already in 1951 in his umpteenth Western). He’s an ex-Reb but he’ll do. 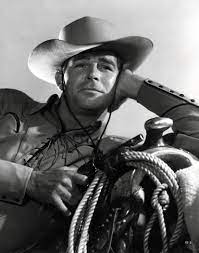 At first, gang boss Millican uses one Gat to rob a stage. It’s a very accurate Gatling because the spray of bullets hits the driver on the box and picks the two escorts off their horses but doesn’t touch the coach or horses. Then the gun is pressed into service in a train robbery. Now it’s a very powerful weapon because the bullets pierce the boiler of the locomotive and stop the train. This time though, the hold-up goes awry. Soldiers aboard the train resist, most of Millican’s men are killed (though not luckily Jim or John) and the Army gets that Gatling back.

But Millican’s still got two, so he cleverly hides them inside fake bolts of cloth and sets off for Dakota Territory to sell them to Crazy Horse. Such villainy.

Now Kirby is up in the Dakotas and meets Lt Jim Davis (as usual at the time, slathered in Brylcreem) and immediately becomes the Lt’s rival for the attentions of the fair, feisty and fulsome businesswoman Claire Conville (Audrey Long, Mrs The Saint-creator Leslie Charteris). Minimal prizes for guessing who wins her hand in the last reel. 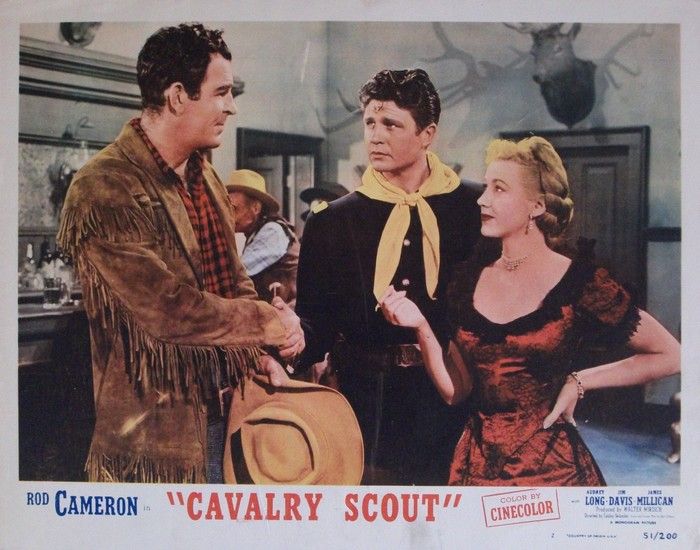 A great deal of naughtiness ensues, not to mention derring-do, which I shall not recount in detail as (a) it would spoil your fun and (b) I can’t be bothered. As you might guess, though, it all ends in an action climax, the bad guys are bested, the good ones victorious, and Rod gets the gal. No spoilers here, I think. 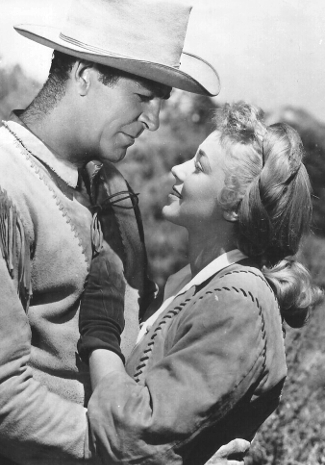 At the end Rod does say to Chief Yowlachie (no sign of Crazy Horse), “Chief, tell your people we will never use these guns ­[he means the Gatlings] against them.” So I think that settles it. The white Americans didn’t use Gatlings against the Indians – for as we know, they never broke a promise to or a treaty with Native Americans.

Anyway, it’s quite an entertaining yarn, as long as you don’t take it seriously, and the cast is pretty good. I enjoyed it. I mean, we’re not talking John Ford or Howard Hawks here but you know, nothing wrong with a solid Lesley Selander oater.

It’s on DVD in the Monogram Cowboy Collections (“Nine movies on three discs”) if you’re interested.