The Westerns of RG Armstrong

Robert Golden Armstrong, usually known by his initials, was at his best in our genre as a violent character. He once said, “I had repressed a lot of things in me from my father’s actions and behavior towards his children. I didn’t want to be a man like that. I didn’t want to be violent, so I repressed it. When they started giving me these [roles as] villains, I started drawing on that and I saw I had all the fury of hell and violence there, that I was really psychotic inside, because I could go into an instant rage or hostility. It was not acting, it was real. And they just kept giving these parts to me.” 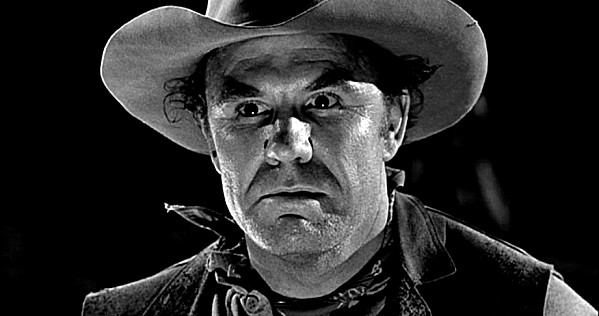 It is enough to watch one scene, RG as Bob Ollinger exploding with righteous wrath at Kris Kristofferson’s Billy in Sam Peckinpah’s Pat Garrett & Billy the Kid, to see the truth of that. Click here for that YouTube clip. Peckinpah said, “RG Armstrong played righteous villainy better than anybody I’ve ever seen.” 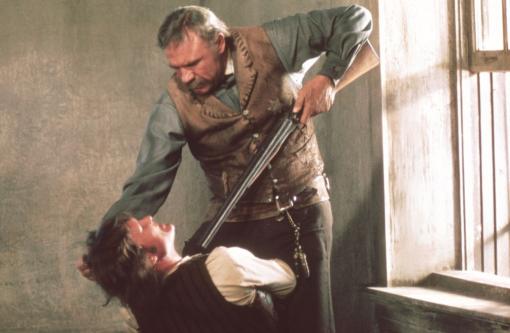 RG worked in many genres, of course, like all actors, and you may remember him for the likes of Predator, but it was the Western that drew him most. In fact that’s where he started, and in a scene from only his second screen role, in an episode of TV’s Jefferson Drum in April 1958, he played a crazed preacher who drags a blonde girl by her hair into his church to whip her. RG was to specialize in backwoods crazed clergymen. “I’ve always loved Walter Huston in Duel in the Sun as a preacher. I’ve always wanted to play some preachers like that ‘cause my mother wanted me to be a preacher so bad it broke her heart when I didn’t.”

The same year, 1958, he was a reverend in an episode of Bronco and he would go on to do others. Perhaps his greatest crazed-preacher role was once again for Peckinpah, this time in the splendid 1962 Western Ride the High Country.

When the director wanted a preacher for Major Dundee, it was of course to RG that he turned.

Even when he wasn’t an actual preacher, RG often played a weird semi-religious type, such as the reclusive visionary Old Man in Millennium or the cultist satanic sheriff in Race with the Devil.

RG had an interesting early life. Born to a fundamentalist family in rural Alabama in 1917, he won a football scholarship to college, where he took a writing course. He wrote poetry and plays. After World War II service he returned to study on the GI Bill and earned a Master’s in Dramatic Art. He then taught for a year. He really wanted to be a writer in the league of Faulkner. By 1966, he said he had written “nine full-length plays, four unpublished novels, and 50 unpublished poems.”

Eva Marie Saint introduced him to the Actors Studio in New York and on Broadway Elia Kazan cast him as Big Daddy in Cat on a Hot Tin Roof when Burl Ives was on leave. An agent recommended RG to Henry Hathaway and in 1958 the actor was cast as the heavy Hunter Boyd in the excellent From Hell to Texas. In the role he is severe, hard as nails, single-minded and hated but, when it comes down to it, just.

When sinister Audie came to town in No Name on the Bullet in 1959 and all the townsmen wondered who he was hunting, RG was the blacksmith. But that was it for big-screen Westerns in the 1950s. RG came ever so slightly late to the genre and missed the true glory days. Fortunately, he would be in some of the very best of 60s oaters.

But even in the 50s, and right through the 60s, he was doing a great deal of small-screen work, and of the 90 television series he appeared in, many were Westerns. He was often a tough sheriff or a rugged rancher. He appeared in episodes of almost every Western TV show you care to name. One episode of Maverick he was in, The Saga of Waco Williams, drew the series’ largest single viewership. It was in fact while on The Westerner that he met Peckinpah.

In 1964 RG was in He Rides Tall, an RG Springsteen-directed Western (so that was two RGs) starring Tony Young and Dan Duryea.

In 1971 RG was one of Cliff Robertson’s old rodeo buddies in JW Coop. In 1972 he got quite a big part as Clell Miller in The Great Northfield Minnesota Raid, written and directed by Philip Kaufman, with Cliff Robertson in the lead as Cole Younger.

In 1973 RG was fourth-billed in the dreadful tripe My Name is Nobody (in which he was miscredited as RK Armstrong) and the following year he had quite a big part as the mayor in the Jack Arnold-directed Fred Williamson vehicle, the these days unfortunately-named Boss Nigger.

RG did occasionally play a more sympathetic character, even for Peckinpah, as in The Ballad of Cable Hogue, and he was the goody rancher in El Dorado, but more often than not he was a hard-as-nails bad guy, if not downright crazy. Yet, like many screen heavies, he was well known for having a warm and affable personality in real life. The IMDb bio says of him “His upbeat, fun-loving personality made him a delight for all who came in contact with him.”

He is one of those Western actors who, when you see his name in the intro credits, you say, “Oh, good.” 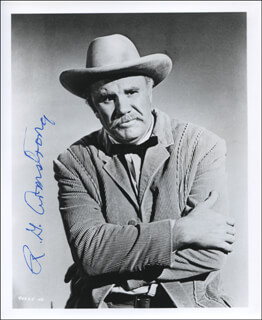