The Westerns of Lyle Bettger

Best as crooked saloon man in a frock coat

We were talking the other day about Western blond badman David Brian and how good he was, especially as dress heavy. But maybe the best of all fair-haired smoothies in oaters, for me anyway, was Lyle Bettger.

Blond men make good villains, for some odd reason, and none better that Mr Bettger, who villained his way from Western to Western all through the 1950s and 60s. He did 20 episodes of 17 different Western TV shows but was at his best in big-screen Westerns, of which he did fourteen, between 1952 (Denver and Rio Grande) and the Robert E Kent-written Roy Orbison comedy The Fastest Guitar Alive in 1967.

He was never the scarred, eye-patched, unshaven style of outlaw, but always the groomed, dandyish Iago in a silk vest who smiled and smiled (or sneered and sneered anyway) and was a villain. He did occasionally do the henchman-type villain in range duds (see, for example, Denver and Rio Grande in 1952, his first Western, when he was bad guy Sterling Hayden’s hired gun) but he was far better in a suit and fancy shirt, for instance as a crooked saloon owner with his own tough henchmen.

Take, for example, the 1954 Destry remake. He was splendid as the saloon man – though his henchmen were a bit innocuous; they should have got Leo Gordon and Lee Van Cleef, say.

Lyle was also the best thing about Universal’s satisfactory but otherwise unsparky oater Showdown at Abilene in 1956. He played the unscrupulous, scheming one-armed ‘owner’ of the town who has his henchmen in key positions, notably the sheriff’s office.

Similarly, in 1953 he was the corrupt dandified town boss of a Reconstruction southern town in The Vanquished who personally hangs a man in the main street.

The same year as Destry he was third-billed in another Audie Murphy picture, Drums Across the River. In that he was a villain from his first camera shot. He and his henchmen cross the river in defiance of a treaty to seek gold in Ute lands.

In Warners’ big-screen The Lone Ranger in 1956 he was the smiling arch-baddy Reece Kilgore, the excellently named big rancher – kill/gore. And his thuggish heavy was none other than our old friend Robert J Wilke. Excellent.

He had a part in John Sturges’s successful Gunfight at the OK Corral in 1957. He wasn’t perhaps the obvious casting choice as Ike Clanton; we usually think of Ike as a lowlife rustler, not a city slicker. Still, Lyle did the job well.

He also had to wear range duds in Guns of the Timberland. And in 1966 he was “Jack Rudabough” in the rather disappointing Nevada Smith. Oh well.

He was better cast as the smoothie bad guy in the late Robert Taylor Western Return of the Gunfighter in 1966.

He also did two of those “geezer westerns” in the 60s, Town Tamer and Johnny Reno. He was the marshal in the first and the mayor in the second. They were AC Lyles productions and Lyles liked Lyle a lot, remembering him as “one of the nicest guys we had at Paramount. So professional.”

Lyle was born in 1915, the son of St Louis Cardinals third baseman Franklin Bettger, and started acting in his twenties. After a stint on Broadway he got a contract at Paramount for a while.

The IMDb bio says of Lyle, “Handsome, blond-haired, steely-eyed villain in many film Westerns, he was never the grizzled outlaw, covered in trail dust. No, he was the immaculate-looking, “respectable” (but two-faced) dandy in silk damask vest, often puffing suavely on a cheroot, whose ashes he then might contemptuously flick in the hero’s face. He could confront an antagonist wearing a wry smile, even while neatly inserting his dirk between the latter’s ribs.”

Lyle said, “It was tough being a dad at that time. I remember my two sons, then seven and eight, accompanying their mom to one of my movies. I was, of course, the villain, and near the end where you have the big fight my sons yelled out, ‘Gee, I hope my daddy wins’. But they were disappointed.” Indeed. As producer Lyles said, “He was, oddly enough, cast as a heavy while in real life he was just a dear, dear man.” It may have been Lyle’s non-Western appearance as the bitter ‘n’ twisted elephant trainer in The Greatest Show on Earth, who, spurned by Gloria Grahame, wrecks the circus train in jealous rage. He was one of those actors viewers immediately identified as a bad ‘un.

From the 1970s Lyle and his family lived in Hawaii and he duly appeared in various shows shot there, like Hawaii Five-O and, on the big screen, The Hawaiians. He died in 2003 at a son’s home in California.

I sometimes cast a Western in my imagination, choosing hero, leading lady, and various characters, and Lyle Bettger is always at top of mind when it comes to dress heavy. 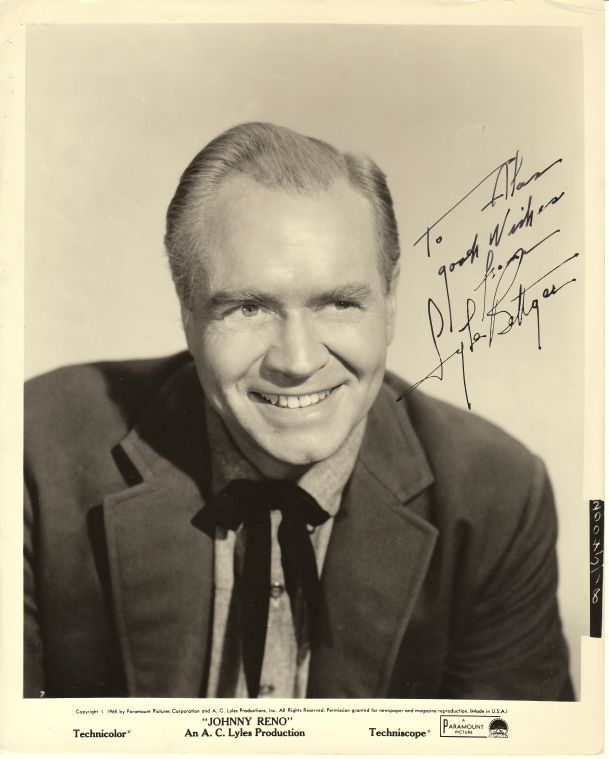