The White Squaw was another Western produced by Wallace MacDonald. MacDonald started as an actor and had first appeared in a Western in 1919, second-billed in Leave it to Susan. He was the Broncho Kid in the 1923 silent version of The Spoilers. He first directed a Western in 1923, Girl from the West and as an actor first led in one, Fighting with Buffalo Bill, in 1926. He first produced a movie in 1937 and produced his first Western, Konga the Wild Stallion, in 1939. In the 1950s, the heyday of the Western genre, MacDonald produced quite a few, and some middling-to-good ones, too, such as The Nebraskan, Ambush at Tomahawk Gap, Massacre Canyon, The Black Dakotas and The Hard Man. He did two in 1956 with David Brian in the lead, The White Squaw and Fury at Gunsight Pass.

I always thought David Brian rather good in Westerns. He was big, 6’ 4” (1.93m), and burly with it. Being blond, he could only really do bad-guy roles but he did them well, especially if a fistfight was required. For me, his best Western was as the tough crooked saloon boss in the Rory Calhoun picture Dawn at Socorro.  But he’s not at all bad in this one either. He plays Sigrod, a mustached Scandinavian cattle baron, with quite a well-handled accent. He’s one of those ranchers who arrogantly refuse to allow anyone else, particularly Indians, whom he loathes, on ‘his’ land. It isn’t his at all, of course; it’s open range. But he carved out an empire and will never let it go. This plot was not exactly new to the Western, of course. In fact the hills were comparatively young when it came in. But it does duty. He has three blond sons, Nordically named Thor, Eric and Knute (William Leslie, our old pal Myron Healey and Robert C Ross) who more or less act as his henchmen but do show the odd scruple, which doesn’t go down well with Far (there’s no sign of Mor). 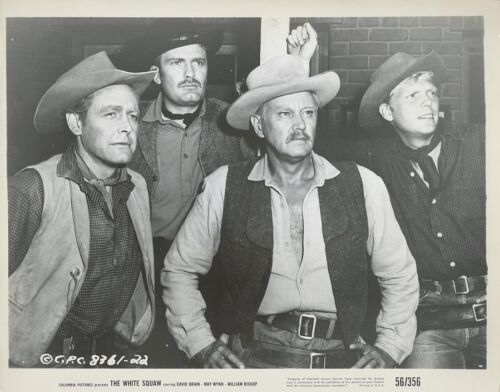 As the action opens, the wicked Sigrod is poisoning a waterhole used by Indians. The local Indian Agent (Roy Roberts) objects, as does decent pro-Indian rancher Paul Birch, but before Sigrod can do much poisoning, angry firebrand Sioux Yotah (George Keymas) opens fire from up in the rocks, unfortunately mortally wounding Sioux ally Birch. Drat. Westerns often had a hot-headed brave counterbalanced by a more statesmanlike chief and this time the latter is Yellow Elk, played by Frank DeKova, so quite a few familiar character actors were hired for this one. 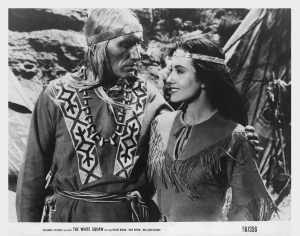 The titular white squaw, who is, as it turns out, neither a squaw nor white, is also very moderate and sage. This is Eetay-O-Wahnee, played by May Wynn, who had played a character named May Wynn in The Caine Mutiny and Stanley Kramer insisted she change her real name of Donna Hickey to May Wynn, which she did. As May she got parts in two Westerns, They Rode West and The Violent Men, and in the year of The White Squaw she became Mrs Bart Maverick when she married Jack Kelly. It’s good that she doesn’t have to play a full-blood Sioux because she looks about as Sioux as I do, which is not at all. 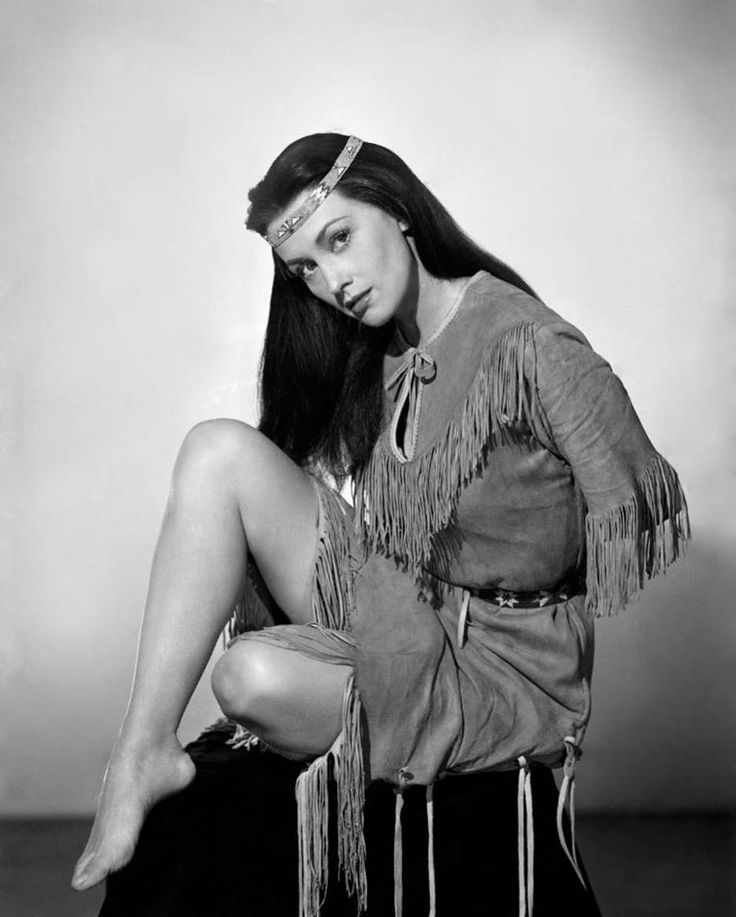 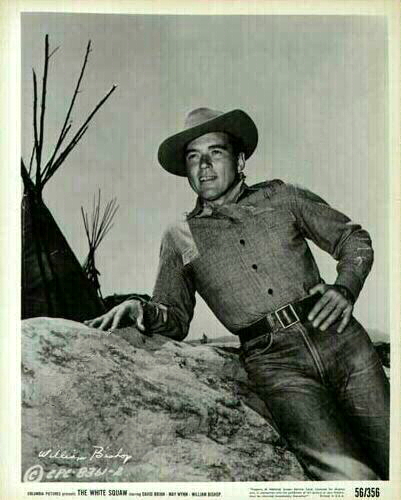 He agrees to sell his cattle to the Sioux, who have acquired money from gifts bestowed on them by Paul Birch. You see, Birch met a fair Sioux maiden in the Black Hills a ways back and Eetay-O-Wahnee was the result of the relationship. He couldn’t acknowledge his daughter because he was ashamed of being seen as a squaw man, but he sent her $$$ on a regular basis. This cash will purchase Bob’s beef and feed her hungry people. Furthermore, he leaves a will and testament dividing his wealth equally between Eetay-O-Wahnee and his ‘official’ daughter, Kerry (Nancy Hale), who is an unpleasant and rather racist type. She will do all in her power to keep that will secret.

Grant Withers is the decent sheriff. I prefer him as a bad ‘un. For me, Grant Withers will always be the skunk-like Silas Meacham, selling guns and whiskey to the Indians in Fort Apache.

Anyway, there’s a great deal of naughtiness and also quite a bit of bravery from the good guys. There are murder most foul, stampeded cattle, and a rather good (and very destructive) fight in the saloon between Bishop and Brian. My money was on Brian at the start of the fight and I was right. There wouldn’t be many who could beat up David Brian in a fistfight. Leo Gordon, maybe.

There’s rather an over-the-top climax in the Sioux’ village, which Stigrod has set ablaze, before the inevitable demise of the villains and happy ending for the goodies. 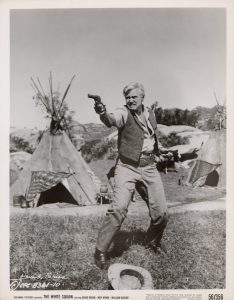 The picture was directed by good old Ray Nazarro, and shot by experienced William Freulich in black & white using Iverson Ranch and Vasquez Rocks locations. The music, which goes all ‘Indiany’ whenever the Sioux appear, is by Mischa Bakaleinikoff.

The screenplay was by Les Savage Jr from a novel by Larabie Sutter. MacDonald would use Nazarro and Savage again on Return to Warbow two years later.

Brian Garfield in his splendid guide Western Films called it “this dreary yarn”, and to be brutally frank it isn’t very good. But Brian lifts it a bit and Paul Mavis calls it “mildly engrossing”, adding, “Western fans looking for a competent if unremarkable oater will probably enjoy it.” I didn’t mind it. It wasn’t a top Western, and it wasn’t even one of the better Wallace MacDonald productions but you know, a mid-50s Columbia Western with David Brian and helmed by Ray Nazarro, there are worse ways to spend a couple of hours.

Of course the title doesn’t go down well these days, when the word squaw has lost any shred of respect it ever had, but it was the 1950s, and at least the story is vaguely pro-Indian. The same was actually true of the early The Squaw Man in 1914. 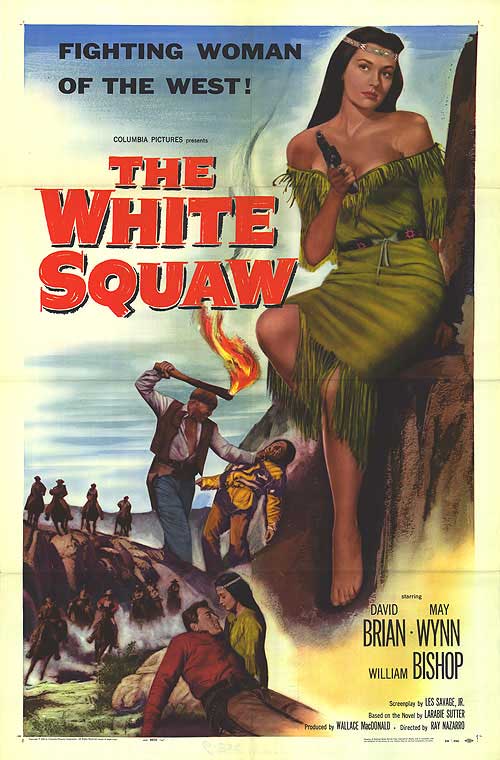