Barton MacLane may be best known as the police lieutenant in The Maltese Falcon, or as a star of I Dream of Jeannie, but for me, he was a top-notch Western heavy. Tall and stout, square-jawed, he just looked the part, and his growly voice helped too. 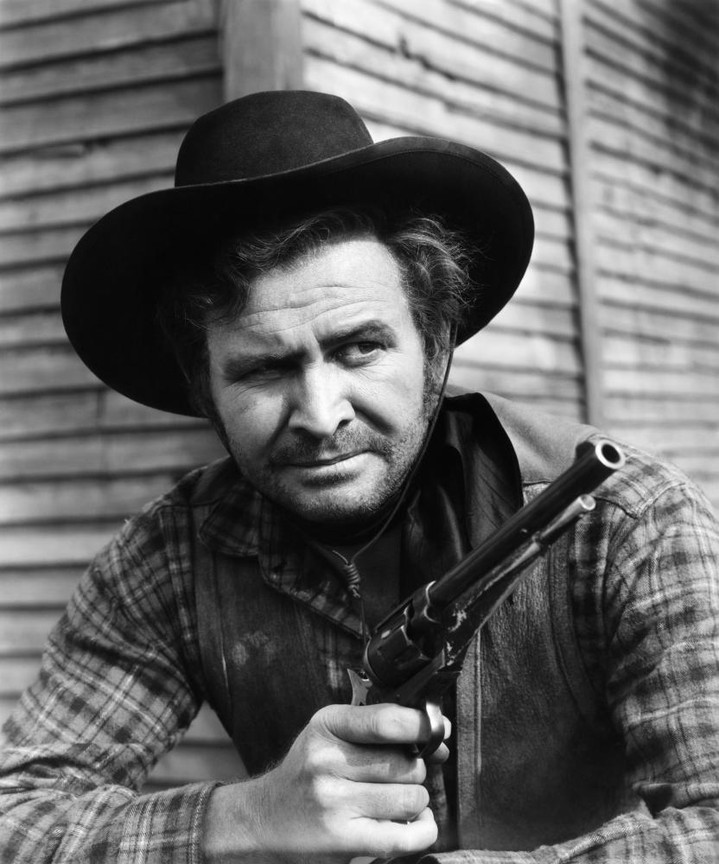 A strapping fellow, he started his screen career (after a stint on Broadway) with a bit part in a college football silent movie with Richard Dix in 1926 but his first credited role was in a Western. In the 1930s, Paramount started remaking its silent Zane Grey tales, to which it had bought the rights, as talkies, with Randolph Scott in the lead and a young Henry Hathaway directing; Barton got parts in several of them, invariably as one of the bad guys. The Thundering Herd, To the Last Man, Man of the Forest, The Last Round-Up, when they needed a stocky bad guy, Barton was their man.

Barton himself said, “I suppose the real reason I was originally cast as a villain is because I’m a big man. You’ll notice villains are usually brawny, a fact which explains the slang term heavy.” He maybe had a point there.

He could do good guy, a goody of the tougher type anyway, such as the hard-bitten cop in Warners’ late-30s Torchy Blane series, but he was better as a villain.

Those Zane Grey oaters an excellent start in the genre. Paramount also put him (as a policeman) in a Jackie Cooper picture, Lone Cowboy, in 1933.

He wrote a stage play for himself to star in, Rendezvous (he’d always intended to become a writer) which was not a huge hit but it was enough to win him a contract at Warners, and directors such as Fritz Lang and Michael Curtiz spotted him. He got noticed as a gangster.

In 1938 he got a good role as the splendidly-named Slag Martin in Curtiz’s semi-Western Gold is Where You Find It, a yarn which pitted hydraulic miners against California farmers and which starred Olivia De Havilland. 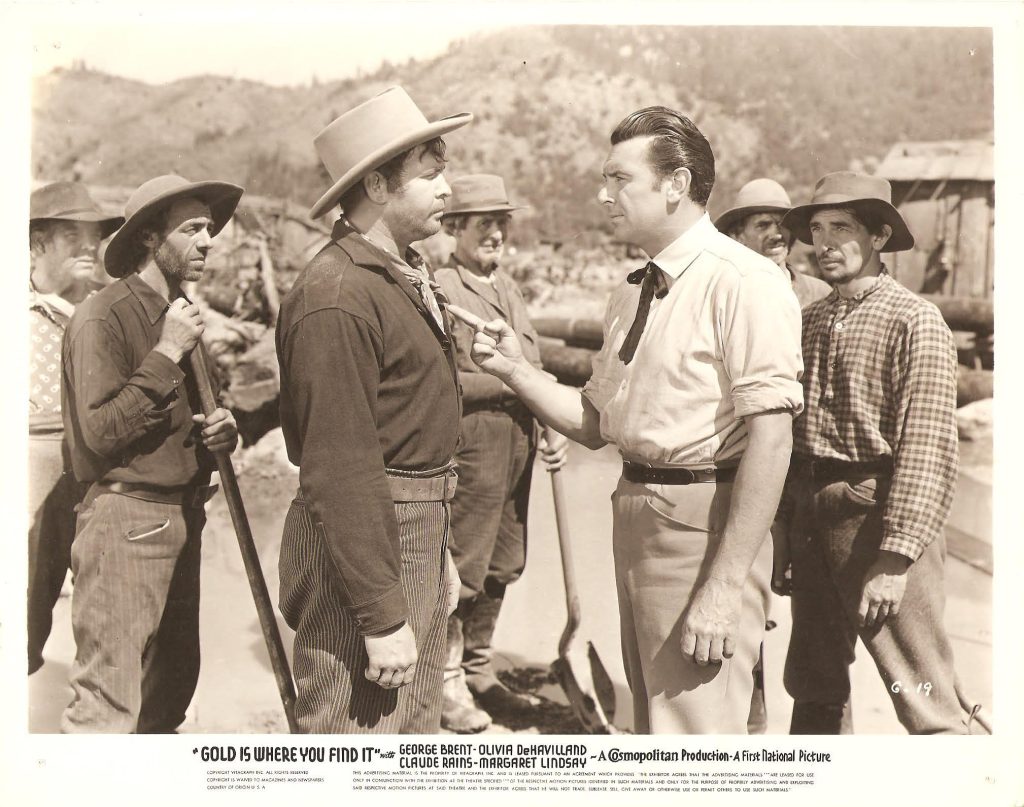 The following year, at MGM, he appeared (as the bad guy, natch, a nasty slave runner, in fact) in the early Robert Taylor Western Stand Up and Fight. 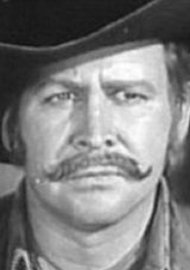 He also appeared (with a second-billed Jimmy Durante) in a Gene Autry oater over at Republic in 1940 but 1941 was a big year because he was cast as Jack Slade in the Fritz Lang-directed Western Union.

This Jack Slade bears no resemblance to the real one but the name had been enough to brand him a bad guy ever since Mark Twain had exaggerated Slade’s exploits with such delighted horror in Roughing It – see, for example, George Bancroft’s splendid Slade in The Pony Express – and he leads pro-Confederate guerrillas against the cross-continental telegraph-building efforts because such efforts are sponsored by Abe. Anyway, it was a really good part, allowing for much skullduggery.

A Gene Autry flick wasn’t enough: in 1943 he was in the Joe Kane-directed Song of Texas with Roy Rogers. And as the 40s progressed, Barton featured in Westerns led by James Craig and a Red Ryder one with Allan ‘Rocky’ Lane. He was getting the experience in, alright.

In the late 40s Barton got serious with his Westerns. No small-part villains for Gene or Roy anymore. In 1947 he was in the Raoul Walsh-directed Warners picture Cheyenne, written by Alan Le May, which I unaccountably haven’t yet reviewed. Must get round to that. And the following year he was fifth-billed in the mighty The Treasure of the Sierra Madre, also for Warners, and back with Bogie as in High Sierra and The Maltese Falcon. Also in ’48 (o wondrous year) he was with Errol Flynn in Silver River and in the comedy The Dude Goes West.

Best of all in ’48 was his part in Relentless, with Robert Young again. It wasn’t the greatest ever Western (partly because of Young) but MacLane as Tex Brandow was splendid in it. He was, as Boyd Magers said in his book Best of the Badmen, “at his vilest.” I’d say that MacLane’s roles in Western Union and Relentless were his best to date.

So by the time of the dawn of the 1950s, that glorious epoch of the Western movie, Barton MacLane was well established in the saddle and adept with a six-gun.

He owned a 2,000-acre cattle ranch in Madera, California too, and riding was his favorite form of exercise, so he was getting in character.

In 1950 fourth-billed Barton as the local sheriff murdered the heroine (Barbara Britton)’s parents in the Lippert B-Western Bandit Queen and, again fourth-billed, he was a tough and crusty Reb sergeant in RKO’s Drums in the Deep South. Actually, his great-grandfather, Henry Joel McLane, served in the Confederate 17th South Carolina Infantry in the Civil War. In ’51 too Barton was in RKO’s highly enjoyable Best of the Badmen, one of those ‘cram-as-many-outlaws-into-one-movie-as-you-can’ pictures.

In 1952, Warners’ Bugles in the Afternoon was called by Brian Garfield “a listless and shabby insult to a splendid book” but Barton was promoted to captain in that one, and cast against type as the sympathetic officer friend of the hero (Ray Milland). 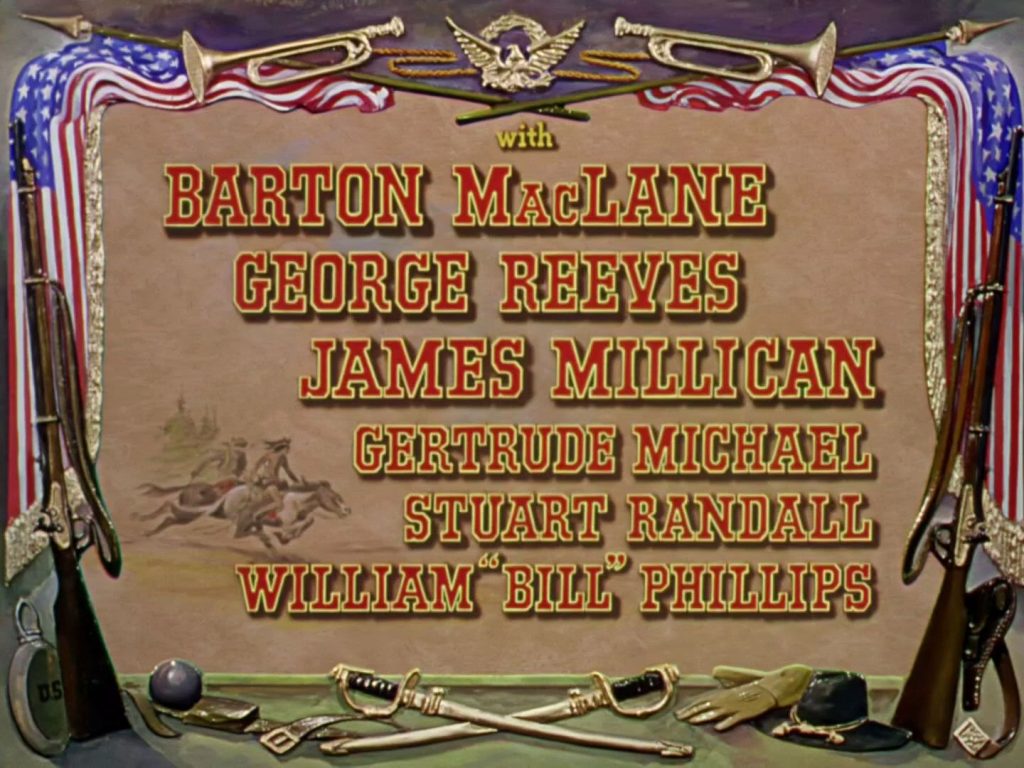 Also that year he was in RKO’s remake of The Half-Breed, yet again with Robert Young, wasted as a nonentity marshal.

But 1953 was a good Western year for Barton. He did three oaters for Allied Artists. He was third-billed in a favorite of a mine, Kansas Pacific, with Sterling Hayden, and very good he was too. And he was fourth in Cow Country, with Edmond O’Brien, directed by good old Lesley Selander. Best of all that year, he was in Jack Slade. He who had himself been Slade back in 1941 was now Slade’s enemy, the drunken villain Jules Beni, and it was another excellent bad-guy part. 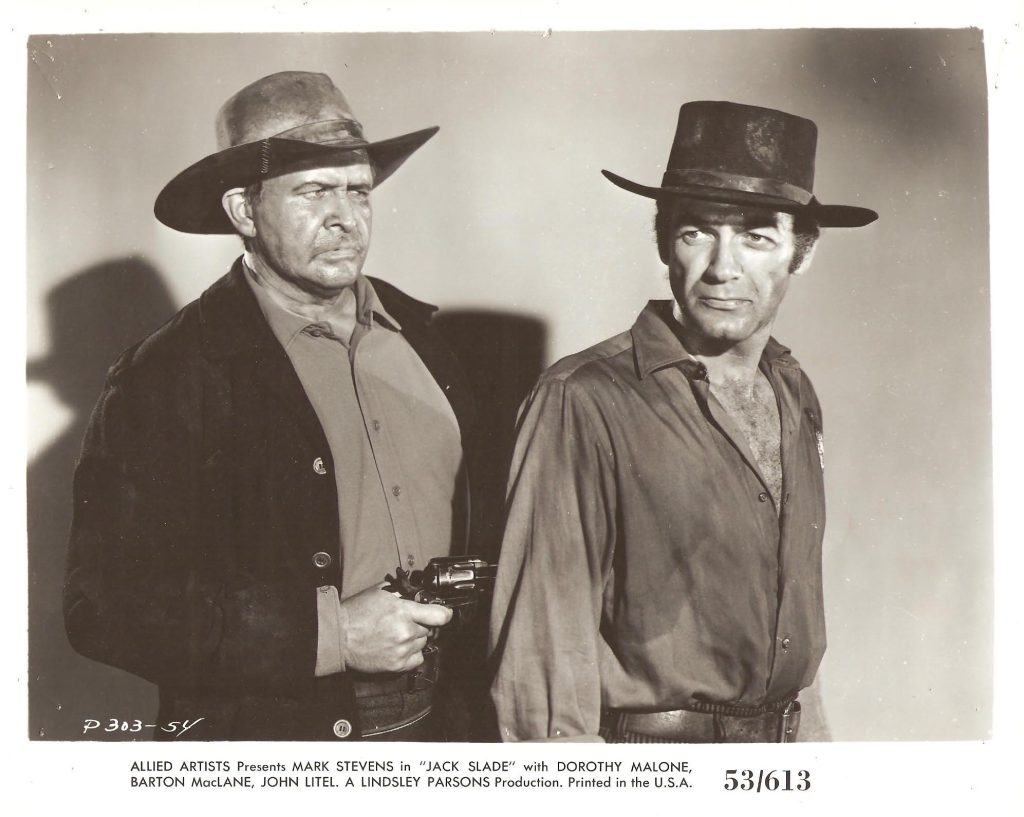 In one way just a humble low-budget black & white B-Western, Jack Slade was actually a very good film, dark, brooding, grim, violent, almost a tragedy. It was well-directed by Harold Schuster and starred as Slade Mark Stevens, in probably his best ever Western performance. Dorothy Malone was also spectacularly good as Slade’s paramour.

There were two more in ’54: Jubilee Trail and Rails into Laramie. The first was an instantly forgettable Joe Kane-directed picture at Republic, starring studio boss Herb Yates’s wife Vera Ralston, and the other was Universal’s fun Jesse Hibbs-directed John Payne oater but unfortunately Barton was cast in that one as a pusillanimous townsman only: the bad-guy jobs were taken by Dan Duryea and his henchman Lee Van Cleef. Still, the following year Barton and Lee were back together, in Treasure of Ruby Hills: Van Cleef is a hired gun, eventually shot down in a classic quick-draw in the saloon and MacLane is a classic ruthless rancher who will stop at nothing. Indifferent film, but good bad guys. 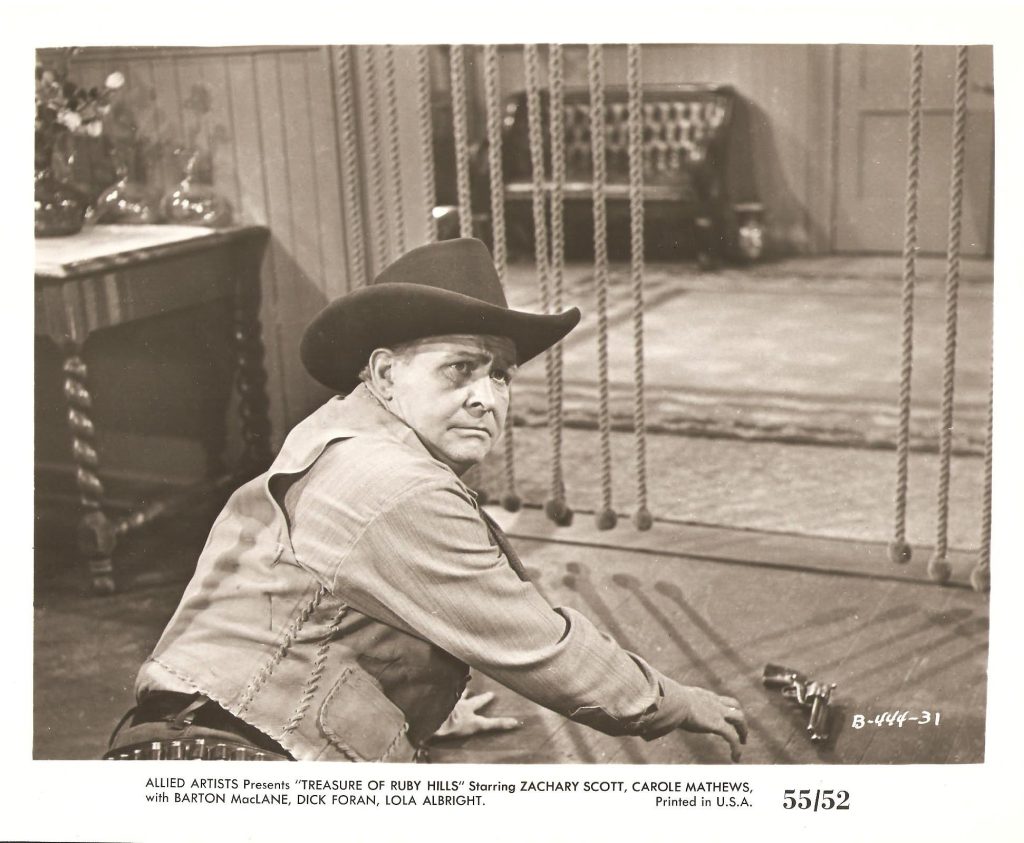 That year too Barton was gang leader Mosby in some Sam Newfield-directed historical hooey about Pat Garrett (James Craig again), Last of the Desperados, as well as being a heavy (naturally) in the only Western the great character actor Edgar Buchanan led in, The Silver Star. The latter was another low-budget Lippert picture, and both the names of Buchanan and MacLane are misspelled in the credits (Buchanon and McLane). Barton in that one was Henry ‘Tiny’ Longtree, the liveryman, in cahoots with equally villainous Lon Chaney.

In 1956 Barton appeared in Three Violent People, Backlash and Naked Gun. He was a wicked carpetbagger, colleague of equally wicked Forrest Tucker, in the first, a sergeant in the second (one of the better players) and third-billed as the saloon owner Barnum in the last. 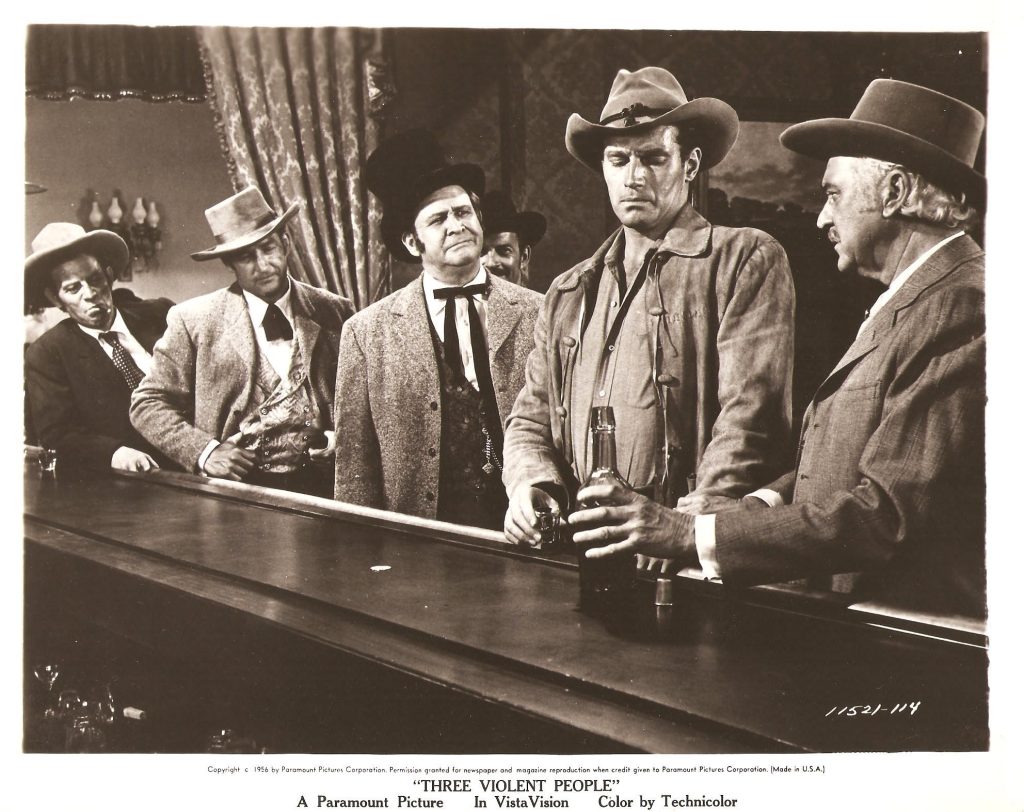 In 1957 he got naked again, this time yet again with James Craig (people were probably starting to talk) in Naked in the Sun, an 1830s Florida yarn. And he also appeared in Hell’s Crossroads and Sierra Stranger, movies led by undistinguished Westerners Stephen McNally and Howard Duff. He was a Pinkerton agent in the first, on the side of the angels, unfortunately, while he was more properly a villain (claim-jumping rat) in Sierra.

There was only one feature Western in 1958, Frontier Gun, led by John Agar. In 1959 he was second-billed to Buster Crabbe in the Edward L Cahn-directed Gunfighters of Abilene, in which gunfighter Kip Tanner (Buster) battles ruthless rancher Seth Heinline (Barton), the villainous land baron who has had his brother killed in a lynching. Good stuff.

In 1960, with the big-screen Western beginning to falter, Barton did Noose for a Gunman, with Jim Davis in the lead. This would be remade in 1964 as The Quick Gun with Audie Murphy (with Ted de Corsia as bandit chief in both) but the original was better as far as the ruthless town boss is concerned because it was Barton. Not only that, he had Leo Gordon as his principal thug. Excellent.

Like many actors in big-screen Westerns, Barton was seduced by TV when the 60s came along and in the first season of NBC’s Outlaws in 1960 – 61 he was good-guy (but tough good-guy of course) US Marshal Frank Caine. Co-star Dan Collier said later, “MacLane was great. I’d been an admirer of his for years when I was a youngster in the ‘30s and he was a heavy at Warner Bros. What a treat to work with a guy like that!”

In fact he’d been doing the odd episode of Western TV shows since 1957, starting with Tales of Wells Fargo S2 E5, in which he was Old Man Clanton, no less, and Circus Boy S1 E29, in which he was again a Pinkerton man. In Black Saddle S1 E12 in 1959 Barton was General Fowler, who was supposed to have died heroically in battle but… He did four Laramie shows in the 1960s too, and later on he’d do two Gunsmokes and a Hondo.

But he preferred the big screen, and when producer AC Lyles put together his 50s-style ‘geezer westerns’ in the 60s, Barton became a member of the stock company. He did Law of the Lawless in 1964, Town Tamer in ’65, and Arizona Bushwhackers and Buckskin, his last ever oater (he was the doc) and indeed his last ever film, in 1968. These were, to be brutally frank, low-budget formula pictures without huge merit, but they were fun, especially for viewers who liked to see the old 50s Western actors wheeled out one last time.

Barton also had a part in the entertaining The Rounders, written and directed by Burt Kennedy in 1965 and starring Glenn Ford and Henry Fonda, along with a whole host of old stagers like Barton – such as Edgar Buchanan, Chill Wills, Denver Pyle, Ralph Moody, Warren Oates and Chuck Roberson, among others. 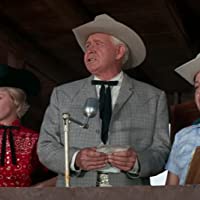 So there it was. He died in 1969, aged only 66. His was one of those memorable faces and one of those names you smile at when it comes up in the credits, and you say, “Oh, good.”

Shame on you, Allan. It may be because, I am told, teenagers in the 1940s and 1950s who felt put upon by authorities would say “Don’t give me that Barton MacLane”.

PrevPreviousTales of Tom Mix: Mountain Killer by Scott McCrea
NextHell on the Border (Lionsgate, 2019)Next

PrevPreviousTales of Tom Mix: Mountain Killer by Scott McCrea
NextHell on the Border (Lionsgate, 2019)Next
Jeff Arnold © 2022 – All rights reserved – Designed by BetterCallChris
Scroll Up