Ho-hum, but at least it highlights Bass Reeves

In the 2010 TV show Justified, Marshal Art Mullen (Nick Searcy), who has a Tombstone poster on the wall behind his desk, talks about the African-American lawman Bass Reeves, and he says, “Good luck finding a movie about him!” It is true that Reeves, and many black denizens of the Old West, have been, with a few notable exceptions, forgotten or simply ignored by the Western ‘industry’ – books, films, and so on.

I suppose it was inevitable in this day and age that this deficiency would begin to be rectified. Hell on the Border is one small contribution to that. Art would have enjoyed it.

The picture was directed and written, though not, surprisingly, produced (surprisingly because there are about a million producers credited) by Wes Miller. Mr Miller, the IMDb bio informs us, “is an upcoming film-making powerhouse, with a dedication to exploring the ongoing social and cultural problems in America.”

He had directed River Runs Red and would go on to do A Day to Die. I haven’t seen those, but this one is not bad, I guess. It’s overly dramatic and occasionally sentimental, the music by Sid De La Cruz unfortunately contributing to that, and it’s one of those Westerns in which the actors are all very obviously wearing costumes, like a historical re-enactment or something, but the action rattles along decently enough.

Bass was born into slavery but managed to free himself while fighting (on the Confederate side) in the Civil War – it isn’t clear exactly when or how. At any rate he fled to Indian Territory where he lived among the Cherokee, Creek and Seminole. After the Thirteenth Amendment, Bass moved, as a freedman, to Arkansas, and farmed.

In 1875 the now notorious Isaac C Parker was appointed by President US Grant a federal judge, at Fort Smith. Though he has been portrayed, especially in Western movies, as a ‘hanging judge’, delighting in stringing up large numbers of malefactors, in an interview with the St Louis Republic on September 1, 1896, Parker made the point that he had no say in whether a convict was to be hanged because of mandatory death sentences, and that he personally favored “the abolition of capital punishment”. Parker arrived to take office on May 4, 1875, and one of his first acts (on May 10) was to appoint one James Fagan as US marshal, and order him to recruit 200 deputy marshals. Fagan knew Reeves, and was aware that Reeves spoke the languages of the area and knew the territory well. Bass was speedily appointed a deputy marshal. The movie makes rather a song and dance of this (and there’s no Fagan) but actually it was a quick and straightforward move, despite Reeves’s skin color.

Reeves worked for 32 years as a federal peace officer in the Indian Territory, and became one of Judge Parker’s most valued men. He brought in some of the most dangerous fugitives of the time. He was never wounded (though he is in the movie) despite having his hat and belt shot off on separate occasions. When he retired in 1907, Reeves had on his record over 3,000 arrests, including, unfortunately, that of one of his own sons. He died of Bright’s Disease in 1910.

Historian Art Burton has said that Reeves was the inspiration for the character of the Lone Ranger. Burton makes this argument based on the sheer number of people Reeves arrested without taking any serious injury, coupled with the fact that many of these arrested were incarcerated in the Detroit House of Correction, the same city where the Lone Ranger radio shows were broadcast on WXYZ. This theory is, as you might imagine, disputed.

Reeves was played by Delroy Lindo in a movie we reviewed last year (click the link for that), The Harder They Fall. They got Lindo up to look very like the photo of Bass in that one. The portrayal of Bass in Hell on the Border, by the British actor David Gyasi, is more central to the plot, and Gyasi is certainly the star of the show. He does Bass pretty well, although, as I said, quite a lot of it is overdone.

Hell on the Border opens with the usual endless logos of production companies, then all repeated in text, and very annoying it is too, and then when we finally get under way, tells us that what we are about to see is “based on a true story”. We’ve heard that one before. The sound on mine (I rented it on Amazon Prime) was muddy and some of the dialogue unintelligible, though luckily I had subtitles. The picture-quality was good, though, and there’s some nice photography here and there.

Indian Territory, 1875. We see an outlaw stuck on his horse in a quicksand, and the courageous and decent assistant of the (white) deputy marshal saves the man, by carrying him (or his stunt double anyway) to solid ground. The assistant is Bass, of course. The outlaw is Charlie Storms, and is played by Ron Perlman, also an executive producer. For me Mr Perlman will always be a biker but he has some Western form, having been Sanchez in The Magnificent Seven TV series and having been Judge Henry in the worst-ever version of The Virginian, the 2014 one with Trace Adkins in the title role. Perlman goes for the amusing-rascal vibe in playing Storms. The real Charles Storms, you probably know, was a gambler shot dead by fellow speculator Luke Short in a gunfight in Tombstone in 1881. This one isn’t so much a slick gambler as a picaresque outlaw of the old school.

Then we see a mass hanging, Hang ‘em High/True Grit-style, and are introduced to Judge Parker, played by Manu Intriraymi, once again got up to look very like the photograph of the judge, I thought. 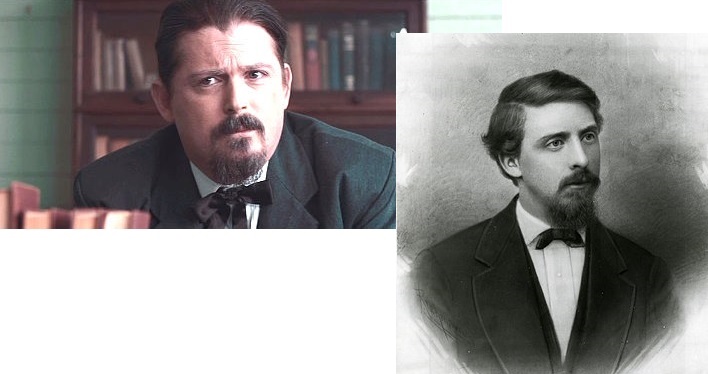 One of the judicial victims is the brother of Rufus Buck, the criminal whom we also met in The Harder They Fall (played that time by Idris Elba) and Rufus himself, played by the same actor (Rudy Youngblood) as the hanged man, will shortly figure in the tale. The real Rufus, too, would fall from the gallows of Judge Parker.

The judge has a bossy assistant, Jessie (Ashley Atwood) who rather improbably tells him what to do, and these instructions include hiring Bass Reeves as a deputy marshal. Parker resists, being progressive and all but there are limits, but eventually does as he’s told when Bass shoots all the men attempting to assassinate his honor.

The chief villain in this story is one Bob Dozier (not the football player, I suppose) who, impersonated by third-billed Frank Grillo, is very naughty indeed, well deserving of being implacably hunted down by Bass Reeves, which he shall be.

In order to accomplish this, Bass will team up with the roguish Charlie Storms, and together the pards will be bold and assertive, not to mention quick on the draw, as one might expect. They will be joined by another deputy, Tom Pinkerton (relationship to Allan, if any, not elucidated upon) played by Gianni Capaldi. Tom was accused of cowardice earlier on, for not rushing into the cabin where murderous Dozier awaited, but he will prove that he ain’t no coward.

Bass and Charlie bring in the body of Dozier, and get more warrants to serve from the judge, or rather from his sidekickess, and they duly ride off into the sunset for, presumably, another later adventure. The movie is billed as the story of Bass Reeves ‘Volume 1’, so I guess they were leaving the way open for sequels.

So there we are.

To be brutally frank, it isn’t all that good, though it’s no worse than many recent Westerns, and, as I say, at least it highlights Bass Reeves, so that’s a plus. Movies like The Harder They Fall and Hell on the Border do offer a useful corrective; I just wish they were better films.