I’ll come back to our Billy the Kid thread (I always do) but today it’s off down a side-trail.

Renegades was, to be frank, an uninspired and uninspiring mid-40s Western from Columbia, produced by Michael Kraike (the fellow who did The Deputy on TV) and rather stodgily directed by George Sherman. Good old George was capable of pretty good Westerns, the likes of Reprisal!, The Lone Hand or Tomahawk, and even of very good ones (Dawn at Socorro is a favorite of mine) but this time he just seemed to be asleep.

It also had distinctly less than sparkling lead actors, I regret to tell you – Evelyn Keyes, Willard Parker and Larry Parks.

Ms Keyes, described in the IMDb bio of her as a “lovely and alluring blonde” but here a rather startling redhead, is probably best known as Helen Sherman in The Seven Year Itch but she did do a handful of Westerns. She had a small part in Union Pacific in 1939, was the female lead in a Bill Elliott oater in ’40, and, for me anyway, most memorable as Allison in The Desperadoes in 1943. In Renegades, though, despite being top-billed, she has little to do except be rather annoying and feeble. 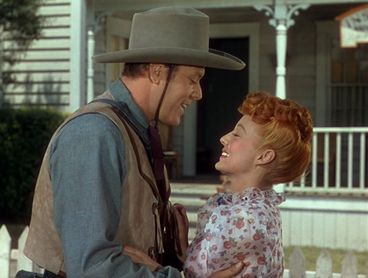 Mr Parker was tall, fair and handsome, a former tennis pro, who would in 1953 go on to (relative) Western fame as Jesse James in The Great Jesse James Raid, which was, however, a less than great movie. Many will also remember him with Harry Lauter in the mid-50s as Ranger Jace Pearson in Tales of the Texas Rangers. He never really cut it as a Western lead, for me. Well, he was blond. 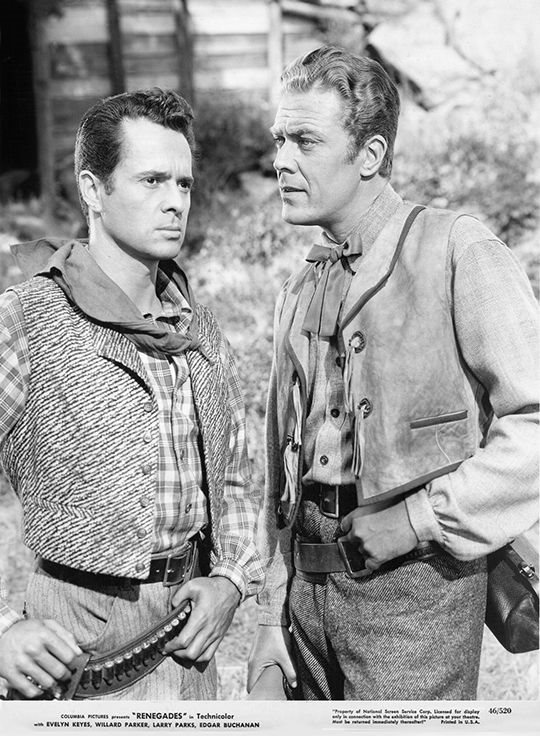 And as for Señor Parks, Renegades was the picture before he hit the big time (and won an Oscar nomination) as Al Jolson in the 1946 version of The Al Jolson Story. His career wouldn’t go well in the early 50s after he admitted to HUAC under pressure that he was once affiliated with the Communist Party. As far as proper films go, I mean Westerns of course, we have to discount him anyway because this and a smallish part in a 1942 Bill Elliott/Tex Ritter oater of 1942 were all he did. Poor fellow. 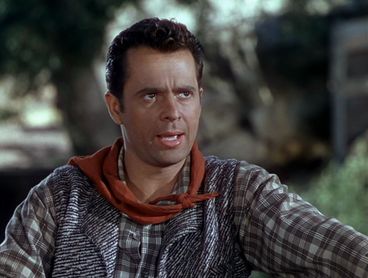 So you see, the line-up was less than galactically stellar.

The picture did have some plus points, however.

For one, it was in color. Columbia’s first color picture, in 1943, had in fact been a Western – that same The Desperadoes in which Evelyn featured, with Randolph Scott, Claire Trevor and a young Glenn Ford. It was quite a hit and maybe Columbia was hoping to repeat the formula. Desperadoes, Renegades, same sort of thing, I guess. Renegades was shot in Technicolor by experienced William E Snyder (The Man from Colorado, Red Sundown, Great Day in the Morning, etc) with some attractive and nicely ‘Western’ Lake Sherwood, Calif and Iverson Ranch locations.

Secondly, as far as plus points go, that great Western character actor Edgar Buchanan figured in it, as the rascally outlaw chief. Not only that, Edgar stole the show. Bosley Crowther in The New York Times said, “It is Edgar Buchanan who runs off with the acting honors. His spuriously sanctimonious portrayal as father and leader of the outlaw brood is underplayed and often funny.” The outlaw gang consisting of a scoundrel father and a few ne’er-do-well sons is a standard trope in the Western. Probably most memorable in this capacity were the excellent Charles Kemper as Uncle Shiloh Clegg with his repellent offspring James Arness, Fred Libby, Mickey Simpson and Hank Worden in John Ford’s Wagonmaster, and Donald Pleasence, wildly overacting (as was his wont) as Preacher Quint with his loathsome sons Gene Rutherford and (especially) Bruce Dern in Will Penny. But to be fair, those pictures came out in 1950 and 1968 respectively, so Edgar as Kirk Dembrow did it first. 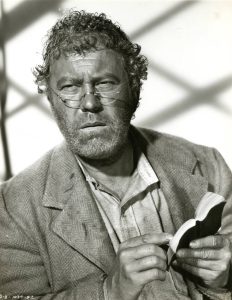 Sadly, however, although Edgar himself is great as the bible-reading villain, poor direction and writing didn’t give the sons anything at all to do. One of them, Frank, is that splendid Western bad guy Forrest Tucker, yet he is completely wasted. He has no lines, is mostly seen with his back to the camera (you hardly ever see his face) and is casually killed midway through. Most disappointing. And the other, Cash Dembrow, played by pre-Red Ryder Jim Bannon, has a bit more to do in the last reel, but not much more.

I say it was bad direction and writing. The latter was by Harold Shumate, who went right back to the silent days (his first Western was in 1917) and later wrote some of those Randolph Scott/Henry Hathaway Zane Grey talkie remakes at Paramount in the early 30s, and then did some goodish Westerns such as The Kansan and Abilene Town (the latter the same year as Renegades) – and indeed would go on to greatness by penning the screenplay from the Luke Short novel for Blood on the Moon in 1948. But Renegades was not his finest hour. Co-credited on the picture were Melvin Levy and Francis Edward Faragoh, Levy doing few Westerns and the others, The Great Sioux Uprising and Calamity Jane and Sam Bass, being pretty clunky, and Faragoh famous for Frankenstein and Little Caesar in 1931 but again with only three distinctly undistinguished Westerns to his credit.

Willard is the hero of the tale, as a gun-totin’ doc. Doctors are almost invariably good guys in Westerns, just as bankers were consistently villains. This one, Dr Sam Martin, is the alpha male of the town of Prairie Dog. As well as curing the burg’s sick, dispensing candy to its children, having dances spontaneously break out in his surgery and generally being adored and revered, he also acts as sheriff, disarming drunks in the saloon and so forth. The archangel Gabriel with a six-gun. 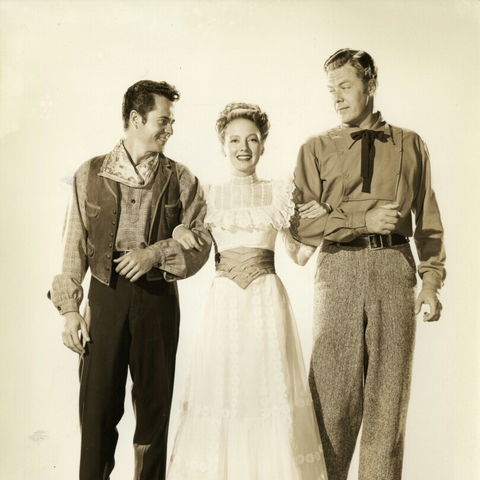 He is engaged to the redheaded Hannah (Keyes), who, however, is rather tiresome and me, me, me instead of supporting the doc in his good works. They are planning a trip, to buy a wedding gown or something, but the doc has to stay behind to minister to a child with diphtheria (naturally he cures her in a trice), so Hannah goes off on the stage with her dad (Willard Robertson) but the stage is then held up by Papa Dembrow and his renegade sons. 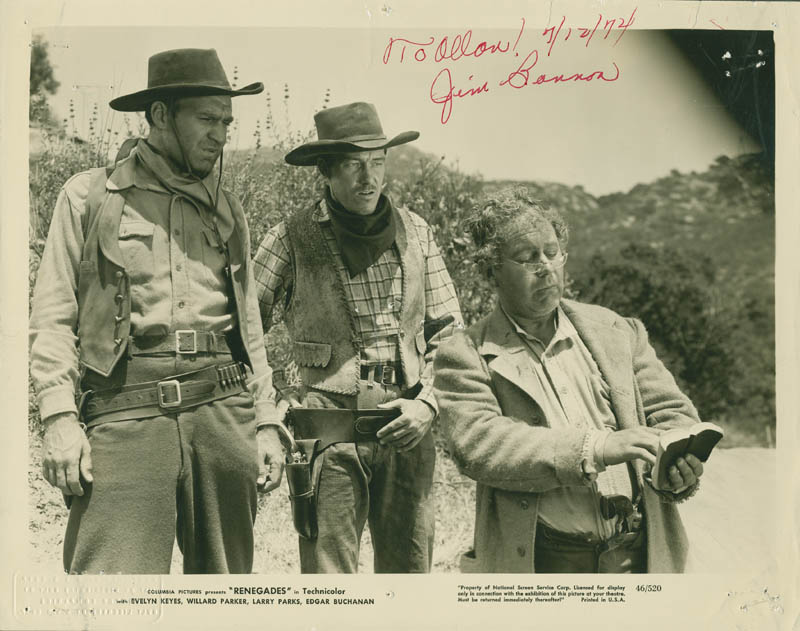 The party is saved when a stranger intervenes, disarms the outlaws and repossesses their loot. This young man (Parks) is bold and gallant, and the faithless Hannah already fancies him, you can tell. In fact, it soon turns out that the name he gives, Ben Taylor, is not his true one. For he is a Dembrow too! He’s the good one, trying to escape the clutches of his paterfamilias and go straight.

The rest of the story tells how Ben Dembrow’s going straight business doesn’t work out too well, Hannah doesn’t cotton to be being a gangster’s moll anymore than she did to being a doctor’s fiancée, she has a baby (the script is at pains to underline that she married Ben, of course; can’t have any extra-marital hanky-panky in a 40s Western) and how eventually the two-timing gal is very improbably and unconvincingly restored to the loving arms of the doc, and she, he and the baby live happy ever after, the end, and not before time, honestly.

I quite enjoyed Paul E Burns as the alcoholic old-timer the Alkali Kid. 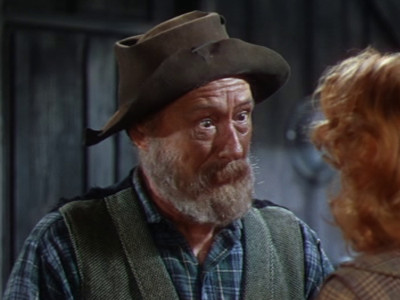 There’s some nice chirpy music by Paul Sawtell here and there but a lot of it is very melodramatic and dated.

There are quite a few posses (Sherman liked them), a wagon chase and a few quick-draw showdowns and such. There’s a trial, the usual travesty of justice. There’s a horrid bit when the stunt doubles of the outlaws spur their horses over a bluff into a lake (they would do that in Westerns of the period; I so wish they hadn’t). So Sherman did try to keep the action going. But there’s an awful lot of talking as the characters explain the plot to each other, and the whole caboodle plods along, I’m afraid. Thank goodness for Edgar is all I say. 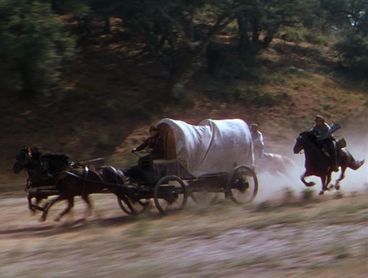 Erick Maurel said the picture was “non seulement difficilement crédible mais également guère captivant et au contraire sacrément ennuyeux” (not only barely credible, but also hardly captivating and on the contrary very boring). The New York Times commented, “Renegades, in which these bad hombres ride amuck, is, for all of its gorgeous Technicolor, only a slick but sometimes, commonplace, Western about a gang of outlaws, who, naturally, get their come-uppance.”

It’s one of those Westerns you could watch if it came on TV (TCM have it) but honestly otherwise isn’t worth the bother of seeking out.