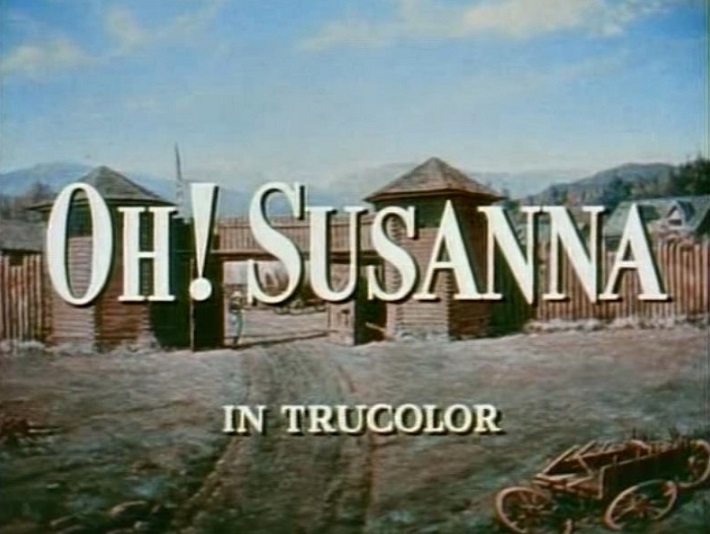 Cavalry Westerns were all the thing in the late 1940s and indeed in 1950 John Ford had made the third of his wonderful series at Republic, namely Rio Grande (the first two had been at RKO). Never one to let a business opportunity slip by, studio boss Herb Yates put together another one soon after. Ford and John Wayne and Maureen O’Hara were busy elsewhere (indeed, according to some sources they’d only done Rio Grande in order to fund their beloved The Quiet Man) and anyway, the budget would be very modest. Cameron would do nicely.

Canadian-born Rod, 6’ 5” in his socks, took bit-parts in various Westerns in the early 1940s and had got the lead as tough-guy Agent Rex Bennett, battling the foreign enemy and saving the world, in Republic’s serials G-Men vs. The Black Dragon and Secret Service in Darkest Africa in 1943. In 1944 the studio let him lead four one-hour second-feature Westerns and in 1945 he had co-starred with Yvonne De Carlo in two bigger (though rather cheesy) oaters, Frontier Gal and Salome Where She Danced. Probably his best Westerns (but it’s relative) were Panhandle and The Plunderers in 1948. Oh! Susanna was already his fourteenth sagebrush saga as lead, so he had got the hang of it. I don’t mind Rod. He was lantern-jawed and burly, and quite good as the strong, silent type.

In this one he is the decent and savvy Westerner, Captain Calhoun, up against a stupid and arrogant senior officer, Colonel Unger, played by our old friend Forrest Tucker. This plot was almost obligatory for cavalry Westerns; you couldn’t really make one without it.

The screenplay was by Charles Marquis Warren, who as writer and/or director had a penchant for army pictures. Only the Valiant, Little Big Horn, Springfield Rifle, Arrowhead, Trooper Hook all attest to that.

The supporting cast wasn’t bad. Chill Wills is the wily old sergeant, who also narrates with a voiceover, and we get Lieutenant John Compton, Corporal William Ching and Troopers Jimmy Lydon, William Haade and Douglas Kennedy. Charley Stevens is a half-breed Sioux scout. These weren’t stellar names, I know, except maybe for Kennedy, but they did a good enough job. Best of all was Republic regular Jim Davis as a slimy saloon keeper in a top hat selling Henry repeating rifles to the Sioux. You know how awful that crime was in Westerns.

For it’s a Black Hills story. Gold has just been discovered and prospectors are seeking to flood in, in contravention of the recently-signed treaty with the Indians that ‘granted’ them this land (which was already theirs). Lowlifes like Jim Davis are all for the flooding in part and half the army is too. Not noble Capt. Calhoun, of course, but certainly the despicable colonel. Tucker plays him as a slob who has come up from the ranks, not gone to West Point like Rod, and he drinks, smokes, consorts with loose women and even, gasp, goes about with his blouse unbuttoned.

It turns out that one of the dubious ladies the colonel fancies, Lia, is really the love of the life of the captain, so now there’s even more reason for the two to loathe each other. She’s played by Lorna Gray, aka Adrian Booth, whom you may remember from The Plunderers in ’48 and Brimstone in 1949 (both also with Cameron and Kane).  This was her last Western.

It’s centered on an army post and they used the movie fort at Kanab, Utah, as they often did. We know it will climax in an attack by the Indians on the fort (these pictures always did). There’s a fair bit of location shooting, in fact, though a lot of in-studio ‘exteriors’ too. The DP was Republic stand-by (I nearly said hack) Jack Marta. The Trucolor process the studio used fades with time so that seen now, the print has pastel shades with a dominant blue. It’s quite pleasant, actually, and the cavalry tunics benefit from the coloration, though it’s a bit odd when you see a blue cannon in the fort or men riding light blue horses. 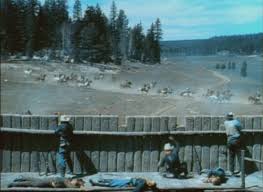 The music was by another Republic regular, Dale Butts, and, inevitably, consists of orchestral variations on the theme of Oh Susanna. John Ford has established the formula: a color Western with as title a popular number of the time that can be sung lustily by the troopers. She Wore a Yellow Ribbon, Oh! Susannah, same difference. There are also a couple of other songs, one with more lusty singing from the cavalrymen and another in the saloon. The off-duty soldiers enter the saloon in such a way that we know for sure there will be a mega brawl and of course there is. These pictures did tend to be a tad on the predictable side. 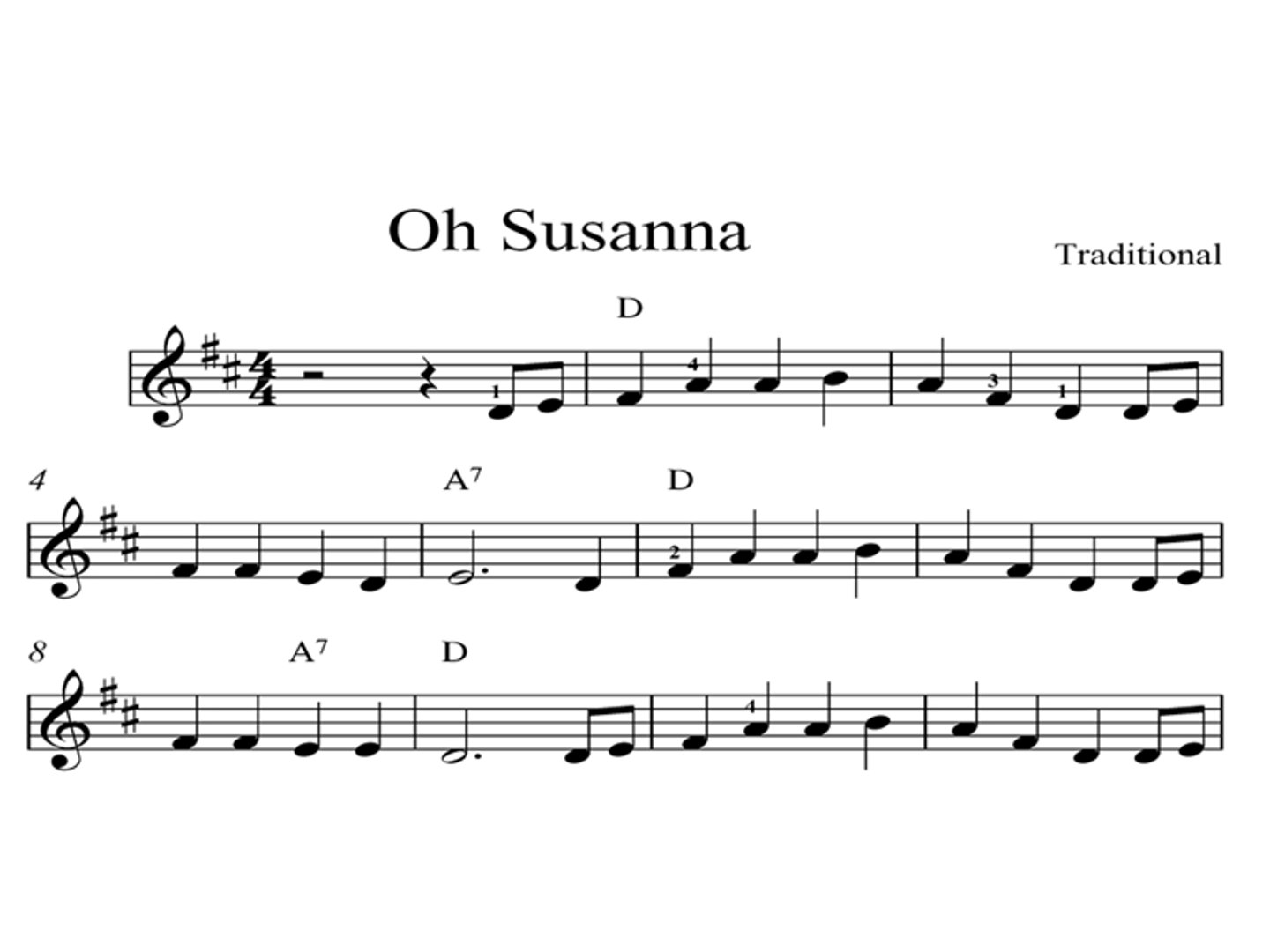 Given the theme, you’d think maybe Custer would make an appearance, but nay.

There’s a dance on the army post, obviously. It is slightly less than Fordian, though. In fact the whole thing is sub-Ford. Very sub, to be honest. 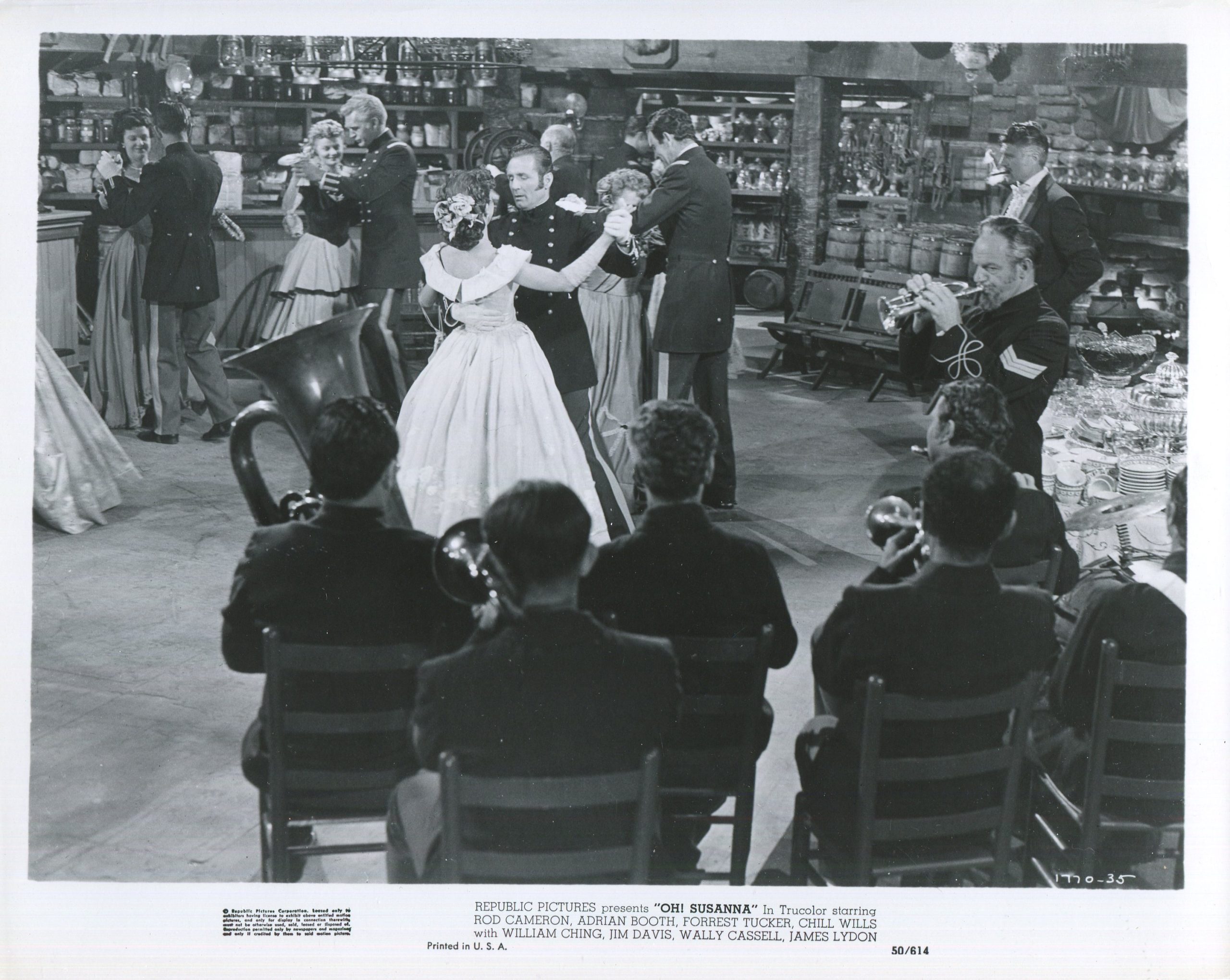 Oh well, it isn’t bad. Rod is beefy and tough, and Forrest gives it plenty, as he often did. I mean, it isn’t good either. But still, you could watch it.