Gene Autry first appeared in a couple of Westerns at Mascot in 1934, Ken Maynard pictures. Mascot boss Nat Levine was finding Maynard increasingly difficult. Ken had done well with early talkies at Universal but, as Wikipedia says (so it must be true), “His reckless screen personality spilled over into his private life, with alcoholism and high living resulting in production delays and temper tantrums on the set.” Levine cast around for an alternative, and lit upon young Autry. He gave Gene the lead in a Mascot serial that did well, the Western/sci-fi crossover which we shall review some day, The Phantom Empire, in early 1935. 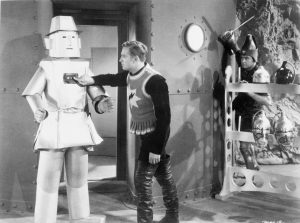 But just at that time Republic Pictures was being formed. Monogram was one of six so-called Poverty Row studios absorbed into the new outfit headed by Herb Yates. Yates welcomed Autry (and Mascot director Joseph Kane) into the fold and reckoned that the singing cowboy was a money-spinner. He was right. The first Autry oater to be released, Tumbling Tumbleweeds, helmed by Kane and co-starring Smiley Burnette as Gene’s musical/comic sidekick, and made on a budget of $15,344, came out in September 1935 and grossed a million dollars, an incredible ROI. Yates rushed out three more in the next three months, all with the same formula, Melody Trail, Sagebrush Troubadour and The Singing Vagabond. 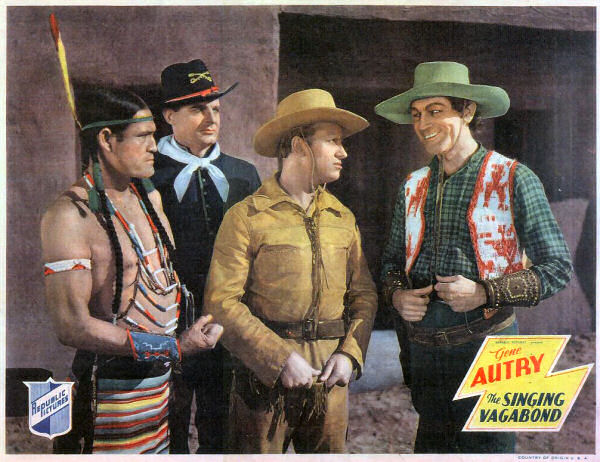 The Singing Vagabond was slightly different in that it wasn’t directed by Joe Kane, but by Carl Pierson. Pierson had been working on Westerns since 1930, as an editor, but had directed two of those Lone Star/Monogram John Wayne B-Westerns in 1935, Paradise Canyon and The New Frontier. After helming The Singing Vagabond, it was back to editing, which he was still doing in the early 1960s.

Still, you wouldn’t know it was a different hand on the tiller. In Vagabond, between songs, Gene thwarts the skullduggery of the bad guys and wins the hand of the leading lady. That’s what he did in all the movies. This time it was Ann Rutherford, but it was Ann Rutherford in the Joe Kane-helmed Melody Trail too. 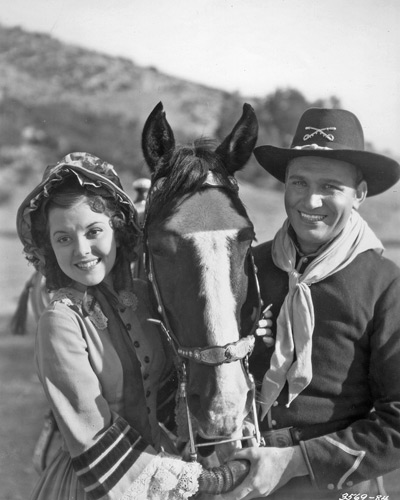 Vagabond is interesting to us Westernistas for another reason, though.  It was the first Western of George Montgomery. He was only Soldier (uncredited) but we’ve all got to start somewhere, right? George was not the most fluid of actors, maybe, but he was always tall and tough and taciturn, and pretty darn good as a Western hero. Plus, what a hat! He would go on to great things – well, quite great things – and many are the Montgomery oaters we have reviewed on this blog.

But anyway, let’s have a look at this Vagabond flick. It will do very well as an example of an early Republic programmer with Gene and Smiley.

It opens in St Louis, where Lettie Morgan (Rutherford) and her pompous aunt (Grace Goodall) are at a show. Unfortunately for us these days, this is a minstrel show with white actors in blackface uttering exaggerated ‘Negro’ dialogue and singing Camptown Races. It’s an excruciating and in any case extraneous scene which goes on for too long, given that the whole movie is only 56 minutes long (edited to 53 for TV). Lettie stows away on a wagon train of show folk going out to California, the wagon train is naturally attacked by outlaws, and equally naturally is rescued by Captain Autry and his band of singing cavalrymen. The captain is rather dismissive of the stupidity of these greenhorns venturing across the West, and Lettie doesn’t cotton to him at first (it’s obvious she will). 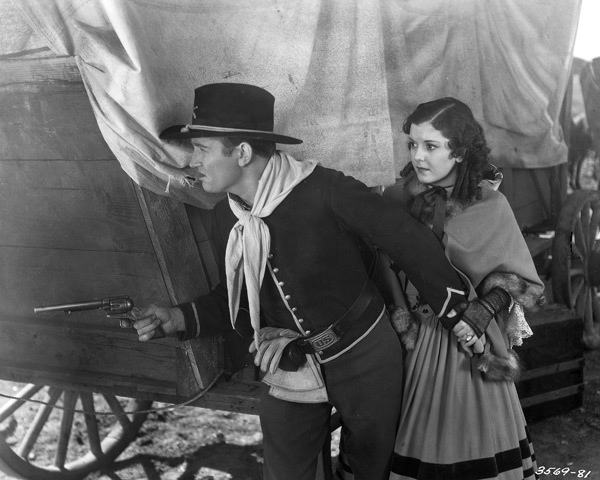 They get to a fort, where the troupe put on a show and Cap’n Autry sings Honeymoon Trail with Lettie.

But then the army horses are stolen and Gene chases the herd, only to get blamed for the theft and imprisoned. The bad guy is really not Gene, of course, but Utah Joe (Allan Sears, who went way back: he’d been Davy Crockett in the 1915 Alamo). He’s obviously the villain because he’s a half-caste. People of mixed race were often the villains in Westerns in the 1920s and 30s.

There’s a smarmy politician (Niles Welch) who wants to marry Lettie and promises he’ll get Gene off at the court martial if she’ll say yes but he senses a rival in the bold captain and does the dirty on him – in fact he decides to Welch on the bargain, ha ha.

There’s a lot of action in the last reel (most of it re-used footage from other old movies, though, and the film stock doesn’t match).The supervising editor was none other than Joseph H Lewis, later to find glory directing noirs, especially Gun Crazy, but also to helm the odd good Western.

Smiley doesn’t get a song, which is a disappointment. But finally the happy couple ride off into the sunset. Until next month, for these movies were coming thick and fast now.

Looked at now, in all honesty The Singing Vagabond isn’t very good. There isn’t enough plot, even for the scant runtime, and you feel that a lot of padding went into it. Oh well, it’s still fun to see Gene in action, and he did have a nice voice. 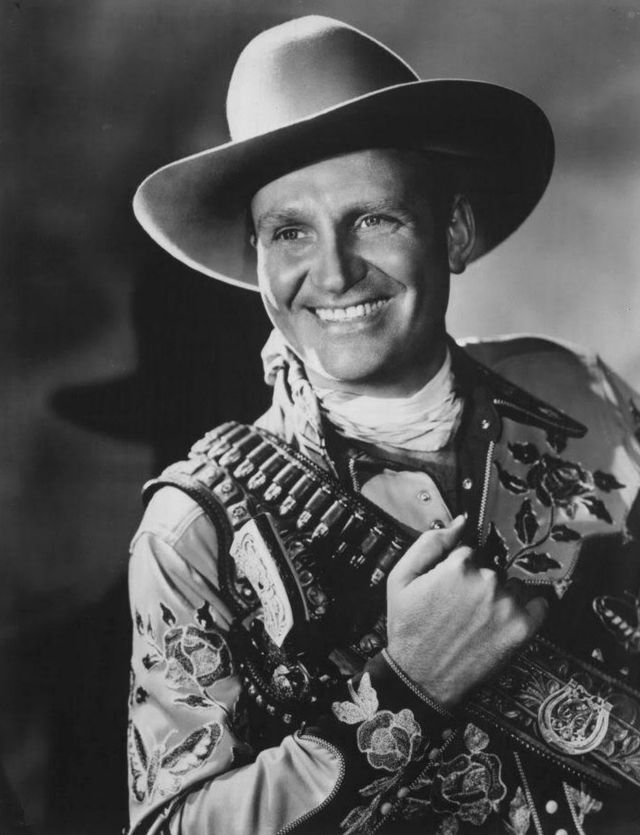 Did you spot George?