Classy film version of a rather tawdry tale

Last time on this blog we were discussing the famous Peter B Kyne Western story of 1912, The Three Godfathers.  The link will take you there. The first film version of it that has survived is the first sound one – the silent movies all having been tragically lost. Carl Laemmle, studio boss at Universal, had produced those early ones, and at the end of the 1920s he decided that the tale would make his studio’s first sound Western, and indeed the first Universal sound picture shot outdoors.

It was actually released simultaneously as a silent, as many early talkies were, for the many theaters not yet equipped for sound, and for a long time only the silent version was known, but later a copy of the sound one emerged, happily, and we now have that.

Though the later MGM treatment of 1936 and John Ford’s Technicolor picture of 1948, also at Metro, both have many strong points, the 1929 version remains the very best – in my view.

‘Uncle’ Carl Laemmle was away on his annual visit to his European homeland when the movie was cast and crew was assigned, and his son, Carl Laemmle Jr, known as Junior, had been made general manager of the studio (as a twenty-first birthday present). Junior was reluctant at first to give the job to William Wyler, a cousin, who had just turned down two pictures he thought weak. Wyler wrote to his parents, “[Junior] wants to reign here like a petty tyrant, requiring everyone to do only what he wants, as if they didn’t have a brain of their own.” In the end, Wyler’s strong track record, despite his youth, of making classy films from indifferent material prevailed, and he got the job. Still, Junior assigned a “production supervisor” (minder/spy) who sent back regular carping memos to HQ from the locations, especially regarding Wyler’s tendency to tinker with the script. For example, during the bank robbery, in the script one of the outlaws orders a cashier to “Reach for heaven, or you’ll go there”, which Wyler changed to the more shocking (but better), “Reach for heaven or you’ll go straight to hell.”

The film follows the Kyne story more closely than other versions we know. The three bad men rob the bank, find themselves afoot and short of water in the desert, come across the lone woman (Fritzi Ridgeway) about to give birth and reluctantly promise to save the infant by taking it back to civilization. The new godfathers have the same names as Kyne’s characters, Bob, Tom and Bill, and much of Kyne’s dialogue is in the screenplay, which was by writer/actor Tom Reed, who also later adapted another classic Western story, Rex Beach’s The Spoilers, for the 1942 movie version. Junior had considered Reed to direct the picture when he was cross with Wyler. With Reed was credited C Gardner Sullivan, best known for All Quiet on the Western Front, the Academy Award-winning picture that Universal made soon after Hell’s Heroes, but in the Western domain, for many William S Hart pictures, such as Hell’s Hinges and Tumbleweeds, as well as other quality silents like Francis Ford’s 1912 The Invaders.

The most significant change – and an improvement from the dramatic point of view – was that where Kyne’s initial bank robbery had taken place in the town of Wickenburg, in the Reed/Sullivan telling it happens in New Jerusalem, which makes the robbers’ return to that town in order to save the baby that much more of a sacrifice, especially because the father of the bairn turns out to be the cashier they slew in the raid.

Curiously, considering how close to the book Wyler’s version was, author Kyne didn’t like it at all. He wrote to writer Reed, “Frankly, I think your Mr. Wyler murdered our beautiful story … It is dreadfully directed and dreadfully played by the leading man. I don’t care how much money the picture makes, my conscience will not let me cheer for the atrocious murder of one of the few works of art I have ever turned out.” This was probably because Wyler’s work, which was artistically on a far higher plane than the pot-boiler story, played down the sickly religiosity and portrayed the three godfathers as tough old birds. It’s a very unsentimental picture, really.

Kyne had a point about the leading man, though. Charles Bickford, as Bob, would become a fine Western film actor. In the seventeen Western features he made, between 1929 and 1966, there were some outstanding performances, and among my favorites rank such pictures as The Unforgiven, The Big Country, Four Faces West and The Plainsman. But at the time he was a successful Broadway stage actor who was new to films, and he would not take direction from a whippersnapper such as Wyler, still in his twenties and dismissed as a family placeholder whom Irving Thalberg used to call Worthless Willy. Bickford thought he knew more about dialogue than the young director would ever learn, and in some ways he was probably right, but he didn’t know as much as Wyler about screen Westerns, that was for sure. Wyler had started his directing career on a Western and Hell’s Heroes was already his thirtieth. 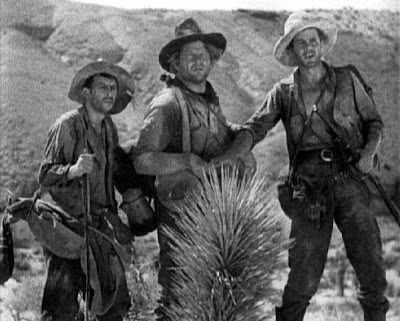 Wyler wanted Bickford, towards the end of the trek, to drag his rifle along in the sand and then just let it drop. Bickford refused, and insisted on melodramatically hurling it away. Wyler said, “No matter how far you throw it in the desert, it’s going to look like nothing.” But Bickford simply wouldn’t do it the way Wyler wanted. As a result, we got one of the most famous scenes in the movie, shot by Wyler without Bickford present – he got a crew member to wear Bickford’s boots and filmed the tracks. We just see the fallen rifle. It’s powerful and memorable (although in my view shot too fast, and the panning should have been slower). Bickford must have been livid when he saw it! 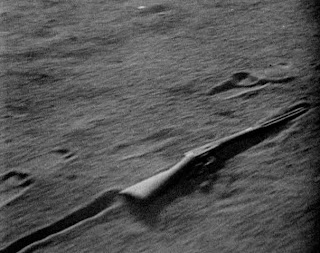 Wyler and Bickford wouldn’t work again till The Big Country in 1958, when they resumed their disagreements without a break.

By the by, there are quite a few scenes where speeded-up film is used. They did it back in the day to make horse chases faster and generally pep up the action, but of course it just looks silly, now anyway.

Bickford was very well supported by two experts in the genre, with Raymond Hatton as the wounded Tom and Fred Kohler as ‘Wild Bill’. Kohler was a regular heavy in silent movies and had been especially memorable in John Ford’s The Iron Horse in 1924. He played the heavy in several of Paramount’s Zane Grey adaptations and repeated his act in some of the talkie remakes in the 30s. Ray we know well: he went right back to movies in 1909 and altogether appeared in over 500 films and TV shows. He’s probably best remembered for his baccy-chewing Rusty Joslin in the Three Mesquiteers pictures and as Johnny Mack Brown’s sidekick but he went on in oaters till 1965, when his last was, appropriately, Requiem for a Gunfighter. Wyler shot in the Mojave Desert in August ‘29, believing that the extreme temperatures and arid terrain would add gritty realism, and he wanted, rightly, to darken Kyne’s story. However, as on the set of Fox’s The Big Trail, the primitive sound techniques of the time made filming here difficult, especially as the outlaws had to keep moving. They improvised a soundproof booth on rails to house the cameraman but it got to over 130°F (54°C) inside and the poor fellow kept on passing out. Microphones were hidden in the sagebrush. 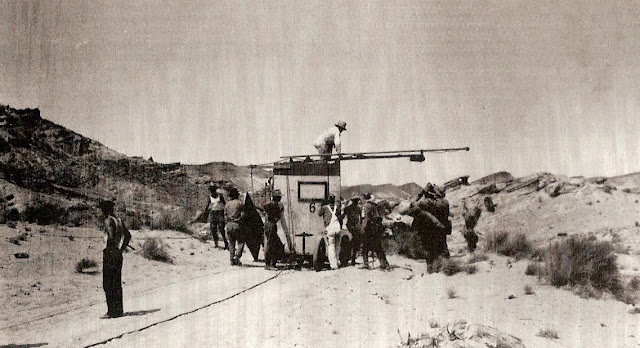 The New Jerusalem scenes were shot in Bodie, the mining camp now ghost town east of the Sierra Nevada in Mono County, in 1929 still just about staggering on as a community with a population of a hundred. 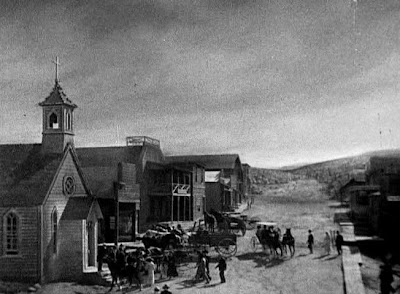 The gritty realism reached a high (or in Junior’s view low) point when Wyler shot the final scenes of Bickford’s character arriving back in New Jerusalem, as an ugly crowd mobs him, a dance hall girl angrily grabs the baby, and the bad man is dragged behind a horse down the street. The sheriff (Walter James) seizes him and promises he will hang, but the lawman’s slaps do nothing, for the bandit is dead. In the version I have seen, Bob drinks poisoned water knowing it will kill him but giving him the vital extra hour he will need to get back to New Jerusalem; he staggers with the baby into town while the community is in church on Christmas Day singing Silent Night and collapses heroically after handing the baby to a townswoman. This version is infinitely more sentimental and jars with the rest of the film but was preferred by the Laemmles. 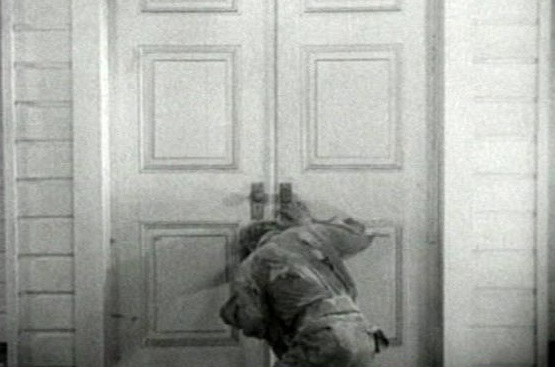 Still, Wyler was able to impose most of his ideas on the film, and Hell’s Heroes is uncompromisingly tough for the period. And it was a major hit. It made an unprecedented $18,000 in the first week in New York alone, and did excellent business all over, making several best-picture lists for 1930. Even Junior had, grudgingly, to congratulate Wyler.

Over at Warners, Darryl Zanuck ordered all his producers to see “this picture by this new director.”

The New York Times rated it highly, calling it “an interesting and realistic bit of characterization” and praising the acting: “The three main characters are excellent, especially Mr. Bickford’s portrayal.” Motion Picture News said, “The picture is an excellent presentation of characterizations through both action and dialogue. The story is particularly strong.” Variety said it was “gripping and real”, adding that it was “unusually well cast and directed” – though Wyler may have been a tad disappointed that the paper called him Wilbur Wylans. 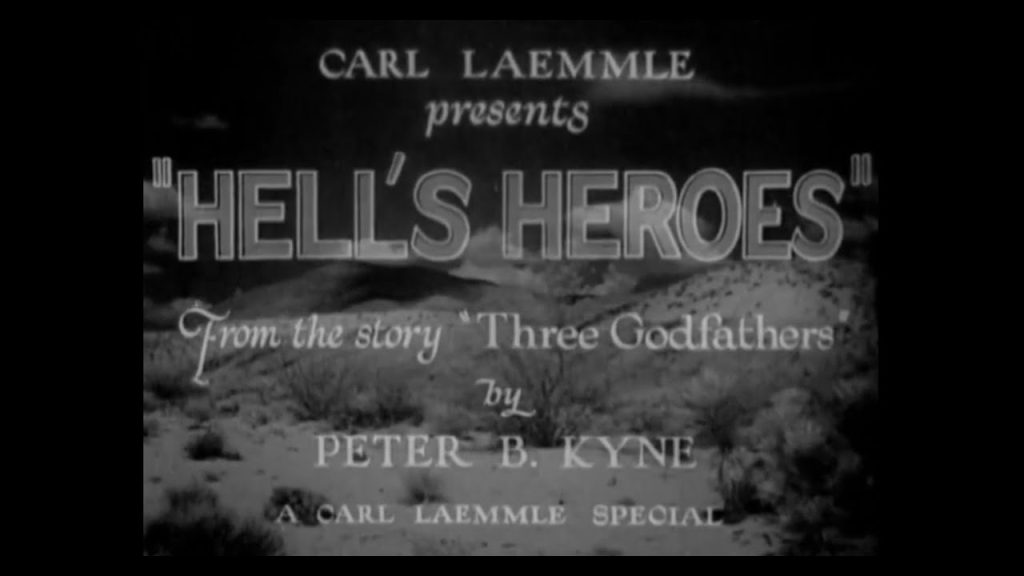 They didn’t all love it. Film Daily called it a “Western of limited appeal due to the absence of love story and the general dreariness of the theme.” Dolts.

With Fox’s Raoul Walsh-directed epic The Big Trail, Gary Cooper and Walter Huston in The Virginian under Victor Fleming over at Paramount, and work starting on King Vidor’s Billy the Kid at Metro (though that one turned out to be a bit of a clunker) the sound Western was making an auspicious start.

According to Jim Lane’s Cinedrome site, MGM made a practice of buying up and suppressing former versions of films it made, and because of this, there is now a double-DVD with both Hell’s Heroes and Metro’s own Three Godfathers of 1936, so you can compare the two versions. 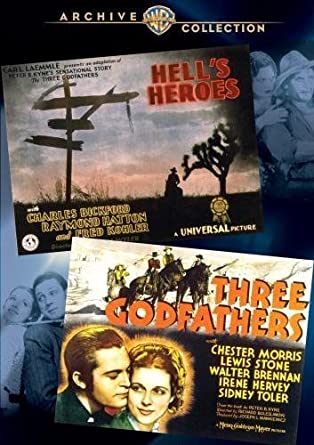 Myself, I like the MGM one, and Ford’s 1948 picture too (though maybe less) but I think that just as the 1929 picture remains the best ever version of The Virginian, so Hell’s Heroes is the finest version of the Three Godfathers yarn we have.

PrevPreviousThe Three Godfathers by Peter B Kyne
NextMarshal of Heldorado (Lippert, 1950)Next

PrevPreviousThe Three Godfathers by Peter B Kyne
NextMarshal of Heldorado (Lippert, 1950)Next
Jeff Arnold © 2023 – All rights reserved – Designed by BetterCallChris
Scroll Up