The other day, when we were discussing the Westerns of producer/distributor Robert Lippert (click the link for that), I mentioned the series of oaters that he made in 1950 with James ‘Shamrock’ Ellison and Russell ‘Lucky’ Hayden. They were Hostile Country, Marshal of Heldorado, Crooked River, Colorado Ranger, West of the Brazos and Fast on the Draw. These six pictures were made by producer Ron Ormond and were production-line jobs. They were shot, all six, in 21 days, using the same cast, crew, locations and even costumes. They’d film all the cabin scenes of the pictures together, then all the stagecoach scenes, and so on. The cost of each feature averaged out at $7,000.

One of them, Marshal of Heldorado, is available in a colorized version on YouTube and it will do as an example (they were all the same anyway). I’m not too keen on colorized black & white movies as a rule but they do have the advantage that the picture quality has been cleaned up. 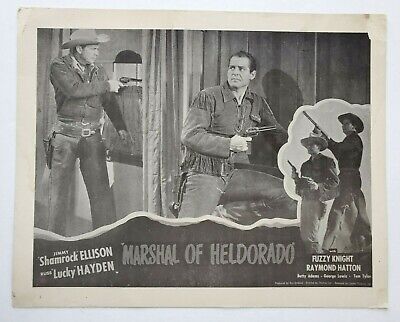 This one has the tried and tested plot of a stranger arriving in town and turning out to be an undercover lawman sent by the Governor to put a stop to crookedness. I wonder how many times that’s been done. The stranger is a dude in a straw boater and riding a burro. Of course it’s Jimmy Ellison and he will turn out to be very far from a dude. The town, Heldorado, is being terrorized by the wicked Tulliver gang (our old pal Tom Tyler is the leading light) and it can’t keep a marshal – that is until Lucky arrives, and Mayor Fuzzy Knight duly hires him as the new peace officer. So together Lucky and Shamrock set out to foil the bad guys.

The town’s banker is crooked, obviously (he’s a banker) and it’s Ray Hatton, which is good. He has a glam daughter, equally obviously (it was compulsory in them days) and this is one Betty Adams, soon to become Julia, then Julie. She was just starting her career (this was well before the Black Lagoon) and said later she was delighted to do the pictures as they allowed her to buy her first car. However, because of the production-line system, she had difficulty in remembering who she was supposed to be in any given scene. Oh yes, that’s right, I’m the banker’s daughter in this one.

The series was produced by Ron Ormond, a former magician who formed Western Adventure Productions, Inc. in 1948 and entered a partnership with Lash LaRue, writing and producing and eventually directing his films. Western Adventure Productions ceased operating in 1951 but some later films were made into 1952 using large amounts of footage from the previous ones with various names credited for the screenplays such as Ormond’s young son Tim and associate producer Ira Webb.

Ormond later moved into exploitation films like The Monster and the Stripper (I’m sure you remember that one) and producing roller derby on TV, and after a plane accident he became a devout Christian and started making fire-and-brimstone fear-mongering films known as Christploitation flicks.

The six oaters were directed by Thomas Carr, and shot by Ernest Miller up on the Iverson Ranch. They were one-hour jobs (there are some shorter versions out there cut for TV). Carr began as a child actor for Selig in the silent days and as an adult made a lot of second-feature programmers for Monogram, then Republic. He directed the Superman serial in 1948 and that got him his most famous gig, the Superman TV show. In fact his Western output was largely for the small screen (127 episodes of different shows) but he also did a lot of feature oaters, working quite a bit with Lippert.

Maurice Tombragel was the writer, a hack Lippert often used because he could churn out formulaic scripts which required a max of four locations and very small cast and be paid very little for them.

Ellison and Hayden were slightly on the downward career path, once the Hopalong Cassidy jobs dried up. Ellison had got a big role as Buffalo Bill in Cecil B DeMille’s The Plainsman at Paramount in 1936, opposite Gary Cooper’s Wild Bill, but he was really remarkably bland in the part and DeMille reportedly thought he was useless. He would soon after these Lippert pictures move out of acting and into real estate. Hayden debuted in Hoppy pictures, in 1937, and also worked on Charles Starrett ones. Lippert used him as lead in 1947 in Trail of the Mounties, in which he played both the hero and the villain. After these Westerns he would team with Jackie Coogan in Cowboy G-Men on TV.

Marshal of Heldorado follows the rules to the letter (some of these B-Westerns were as convention-bound as D’Oyly Carte Gilbert & Sullivan or Japanese Noh plays), so we open with a horse chase, have another near the end, in between there’s the requisite amount of shooting and fisticuffs, and then we get a final shoot-out and the hero gets the gal in the last scene. The cast and crew could have walked through it asleep. Maybe they did.

The pictures were destined for the bottom half of programs in provincial theaters, and then rapidly sold to TV.

They were really made as disposable entertainment, and they weren’t designed as keepers. It’s only really because of TV and then streaming platforms that they have survived at all. They are quite fun, though.