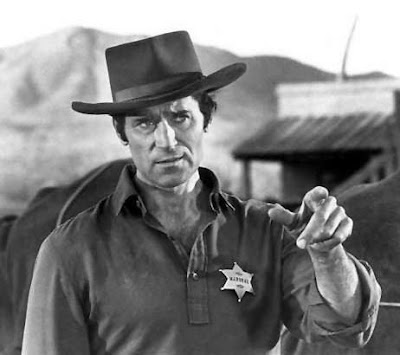 .
Yuma is a pretty standard early 70s made-for-TV Western, wholesome family viewing. But it’s not at all bad. Clint Walker leads as marshal of Yuma. Of course we all know Clint as Bodie Cheyenne on one of the best Western TV shows but he also did quite a few good features, such as Yellowstone Kelly and Fort Dobbs. He had a great voice and his deep, slow, Western drawl (even though he was from Illinois) is distinctive. And, of course, his 6 foot 6 inch height (and nearly the same across) is equally famous. In The Night of the Grizzly it was a coin-toss as to who had the more impressive physique, Clint or the bear. Walker was admirable as the strong, silent Westerner.
.
.
He is supported by a good cast of character actors led by Edgar Cuchanan (sadly in his last ever Western) and including Barry Sullivan as principal baddie and Morgan Woodward, pitching his big-rancher part somewhere between Lorne Greene and a character from Dallas. I thought the Apache chief might have been Neville Brand for a minute but it was Rudy Diaz.
.
.
You already know Clint is the good guy, of course. How could it be otherwise? But the standard ploy is used for proving it: he is nice to children. An early scene where the hero protects a battered animal or an abused child is unmistakable code for ‘goodie’. He also, of course, is a hit with the hotel owner Julie Williams and sure ‘nuff, by the end, marshal, Julie and the boy are a family unit.

There is a straight steal from Hondo in the final scene as the marshal throws the kid in the water to teach him to swim and threatens that Julie will follow as she can’t swim either. Let’s not call it a steal; let’s say it was an affectionate quotation.
.

.
The movie is directed by journeyman Ted Post who had put in the years doing TV shows, including some Western ones (The Rifleman, Wagon Train, Gunsmoke and so on, though not Cheyenne). It was written by Charles Wallace, who had done almost only Westerns.
.
.
It’s an obvious TV movie as you can tell from the rhythm: frequent mini-climaxes to the action followed by fades-to-black for the commercial breaks. But it’s nice. It’s filmed in Old Tucson so we get some attractive AZ scenery and saguaros in pleasant color.
.
.
It’s predictable, maybe staid and ever so slightly juvenile. But I’ve seen a lot worse.