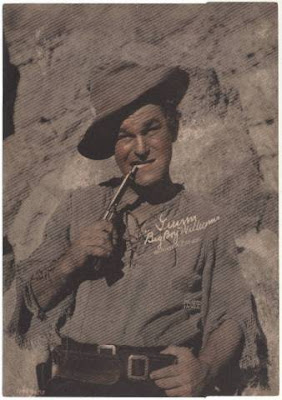 The Law of 45s, also known as Law of the Forty-Fives and Sunrise Guns, is a straightforward Saturday-morning talkie programmer in which Tucson Smith (Guinn ‘Big Boy’ Williams) and his sidekick Stoney Martin (Al St. John) thwart a dastardly lawyer (Ted Adams) and his bunch of low-down dry-gulchers. There’s no sign of Stoney Brooke, though. There are only two Mesquiteers.

The bad guy wants the whole valley, you know how they do, and kills ranchers who refuse to sell out at low prices.

Big Boy’s horse is big and white, as is his Stetson. There’s a fair maid for Big Boy to woo ‘n’ win (Molly O’Day) and her pa is mighty pleased with the idea because Big Boy has saved the ranch.

There are two songs the cowpokes croon round the camp fire.

It was based (amazingly) on a novel. The writer’s name was very good: William Colt MacDonald. He was of course famous for the Three Mesquiteers series.

Good for Big Boy to get to lead in a Western anyway.