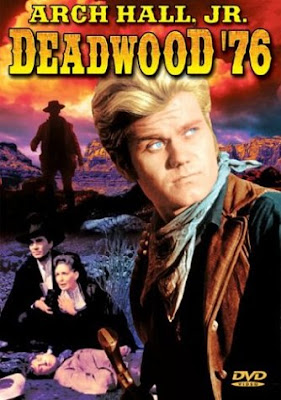 Well, pardners, another clunker to report on. You see, a very good friend of mine, who is also a Western addict, sent me for my birthday (thank you, ma’am) one of those boxes of DVDs with 20 Westerns on 4 discs. So I’ve been working through them.
.
.
This one, Deadwood ’76 was dismissed by Brian Garfield in his great book with just four words: “cheap and very bad.”
.
.
I would just say the following:
.
.
James Landis (1926 – 1991) was a poor writer and second-rate director of very few movies. But Deadwood ’76 is in fact not a second-rate film. It is a third-rate movie written by Landis along with some Arch Halls, Sr & Jr (who also act in it). The worst feature of it, though, is not the poor writing or turgid direction, bad as they are. It’s the quite dreadful acting.
.
.
‘Actors’ (actually, I think they are rejects from small town amateur dramatics troupes) read the words or announce them in a drone if they have learned them. If the words were OK it mightn’t matter so much but the script is ineffably banal.
.
.
The lead, Arch Hall Jr, whose last film this was (phew), is ‘Billy May’. He’s odd looking, overweight, puffy-faced, with eyes too close together and Trumpian hair. His love, the Indian Little Bird (La Donna Cottier), has exactly the same qualities (they were made for each other), although her hair is dark. The closest to good acting comes from Jack Lester as ‘Tennessee’, although he isn’t good enough to overcome the dire direction or screenplay. He is first seen taking a cargo of cats to Deadwood. I wonder if Pete Dexter had seen this film when he wrote Deadwood in 1986. I doubt it.
.
.
Robert Dix (son of Richard) is Wild Bill Hickok. He looks fairly dandy in long hair and swallow-tail coat but that’s about it. He’d had bit parts in low-budget movies for some time. This was another.
.
.
The story is some preposterous twaddle about Billy the Kid going to Deadwood in 1876 for a showdown with Wild Bill. In 1876 Billy was 16, not yet famous and working, as far as we know, on a ranch in Arizona. He most certainly didn’t go up to Deadwood for a gunfight with Wild Bill. Never mind. Westerns must be allowed their fantasies.
.
.
There are Indians and shootings and saloons and prospectors striking gold and such.
.
.
It was filmed in South Dakota and California. Billed as second photographer is one ‘William Zsigmond’. It’s none other than Vilmos, cutting his teeth before going on to become one of the great Western photographers (McCabe & Mrs Miller, Heaven’s Gate). So it’s interesting for that.
.
.
The Deadwood set isn’t that bad, in fact. It looks a bit like Deadwood in the gulch there jammed up against the hill. I wonder which cowboy town the set was.
.
.
I don’t mind Westerns which play fast and loose with history. As long as they’re fun. But turgid tales badly acted don’t make for terribly enjoyable viewing. Give this one a miss, pardners and you won’t have lost much.
. .
.
PrevPreviousBetter than a dead fish
NextBarquero (Universal, 1970)Next

PrevPreviousBetter than a dead fish
NextBarquero (Universal, 1970)Next
Jeff Arnold © 2022 – All rights reserved – Designed by BetterCallChris
Scroll Up