Worth seeing, for the curiosity value
.

It is extraordinary, really, how far movies came in only a decade. In 1939 John Ford was to produce a Western of the interactional sophistication of Stagecoah yet only nine years earlier the standard was little more than a silent with occasional shouted dialogue. The Big Trail is a most interesting film to see from an historical point of view but it really is very crude.

.
Of course, we can only judge it by its present form. It was shot simultaneously in 35 mm, by Lucien Andriot, and in widescreen 70 mm, by Arthur Edeson.  This was a very early widescreen format known as Fox Grandeur. The best camera angles were reserved for the widescreen version. The huge cost of this helped push Fox to the brink as the 1929 crash impacted. In fact only two theaters were equipped to show the widescreen version, the Roxy in New York and Grauman’s Chinese in LA. Most people in later years have seen the Edeson version cropped on both sides – the worst of both worlds. Eventually, in the 1990s, the Museum of Modern Art restored the film, converting Fox Grandeur to CinemaScope, and the splendid Edeson version to be seen there is apparently brilliant. Those who have seen it say that The Big Trail is a masterpiece. Most of us, of course, see the 35 mm or 70mm chopped version on tiny DVD and we think it isn’t a masterpiece at all, just an interesting part of cinematic history.
.
.
Even on your TV at home, it’s still impressive in many ways. It was made on a truly grand scale and the sheer number of wagons and people and animals is very impressive (it was an Oregon Trail movie made as a kind of reply to Paramount’s The Covered Wagon, the famous silent of 1923). Director Raoul Walsh had an enormous $2m budget. There are remarkable scenes, notably of the buffalo hunt, the lowering of wagons down cliffs (all wagon train movies had to have this bit) and the crossing of a river. They seem to have been made with a blatant disregard for the welfare of all the horses, mules, cattle and oxen involved but the standards were different then. You can’t help admiring the grandeur and scale of this picture.
.

The acting is a different story. The movie is famous, of course, for having chosen a Fox prop boy as the lead, a fellow named Marion Morrison to whom Walsh gave the name of John Wayne (the myth that John Ford discovered John Wayne came later). Wayne (above) looks the part alright and is very tall and handsome and also has a winning naïf charm but as an actor he had everything to learn. He really couldn’t handle lines. He wasn’t much helped by the dreadful, wooden script of the kind that has characters say, “I’ll just go over there.” (Goes over there). It was sad that Walsh’s first choice, Gary Cooper, was not available. 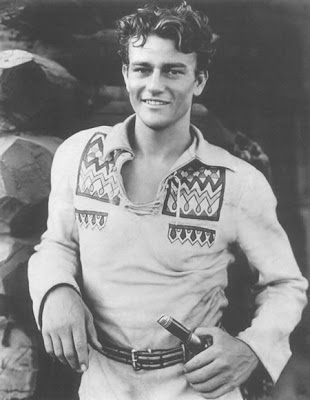 Like all directors then, Walsh was more used to telling a story in pictures than in words and Wayne moved in such a catlike way that he was ideal from the visual point of view, such a contrast to the lumbering heavy Tyrone Power Sr.

.
.
His supporting actors, including Power, billed fifth, all yell their lines. They had to, because the sound quality and microphones were so bad and the open air location shooting made it necessary. The plot is awful corny, too. 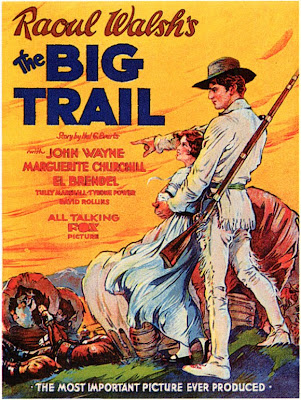 Power is the wicked wagon boss (he looks like a buffalo in his robe and sounds like one too) in league with the sly Louisiana gambler Ian Keith to thwart honest scout Wayne’s designs on the winsome Marguerite Churchill. You may guess who wins out and claims the fair maiden. Actually Wayne, with his Indian skills, in his buckskins and with no gun, looks more like Hawkeye than the hero of a 19th century wagon train.
.
There’s the inevitable comic Swede, El Brendel, who was actually billed in the cast as ‘Gus, Comical Swede’. Corny it may be by today’s standards but it was a lot more sophisticated than the silent TheCovered Wagon (1923) – though less so than The Iron Horse (1924).
.
One thing you can say, even in the small-screen black & white version, some of the photography is very good: Indians on hilltops, moving buffalo, California redwoods at the end. Impressive. It was shot in the Grand Teton pass, Yellowstone, The Sequoia National Park, in Montana, Oregon, Yuma – the cost must have been huge.

A two-disc DVD was released in the US in 2008, containing both 35mm and 70 mm versions, and would be a good investment.

.
See The Big Trail anyway, for the curiosity value. The poster said it was “The most important picture ever produced.” That’s hooey but nevertheless it’s a milestone on the trail of the development of the Western.
.
.
PrevPreviousAngel and the Badman (Republic, 1947)
NextShane revisitedNext