.
.
It’s a nice little film
.
.
John Wayne’s first film as a producer was Angel and the Badman, a love story really, with occasional action sequences, rather than the other way round. 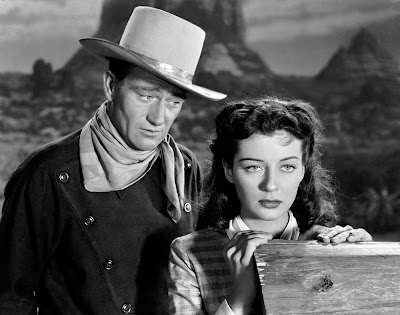 The great thing about it is the writing. The movie was written and directed by Wayne’s friend James Edward Grant and he did a fine job with the screenplay. The script is intelligent, occasionally dryly witty and interesting too. The characters, even the minor ones, are very well delineated. World-weary – and physically weary – Dr Mangram, for example (Tom Powers) or Frederick Carson, the neighbor (Paul Hurst). Most especially strong is Harry Carey as Marshal Wistful McClintock. Wayne was a huge admirer of Carey, star of so many silent Westerns and part of the John Ford clique (until they fell out anyway). Certainly here he is masterly, bringing power to a relatively minor role and remaining in the memory. It was one of his last films and he died in September that year (though he appeared in Red River, his last Western, because although that did not come out till August 1948 it was filmed eighteen months before).

Wayne is Quirt Evans, a badman whom a Quaker family helps to recover from his wounds. In that way it’s a kind of Friendly Persuasion ante diem, although it is a far better film than that and also more of a proper Western. As in Friendly Persuasion, however, the Quakers can’t manage their thees and thous. “How does thee know?” or “Thee are shocked.” That kind of thing. In fact thou hardly gets a look in. Is it that nineteenth century Quakers didn’t know the difference between thee and thou, or that Hollywood scriptwriters didn’t? I have a shrewd idea.

Gail Russell (this, Seven Men from Now and El Paso her only Westerns) is delightful as the Quaker daughter Penelope who leads Quirt away from the ways of iniquity on the gentlest of leashes.

The black & white photography is by Archie Stout, so competent it verges on arty. There are some lovely shots of riders on a ridge, a favorite image of his. The Richard Hageman music, however, is pretty dire – straight low-budget Western overdramatic fare.

Laredo Stevens is the heavy, played by Wayne pal Bruce Cabot, and his sidekick is Hondo (Louis Faust) so what with Hondo and McClintock (McLintock, anyway) Wayne got two names to conjure with later. Cabot was a great pal of Wayne’s despite the fact that they had competed for the part of Ringo in Stagecoach.

There’s an excellent bit where Quirt tells his rather wet rival to marry Gail, even though of course we 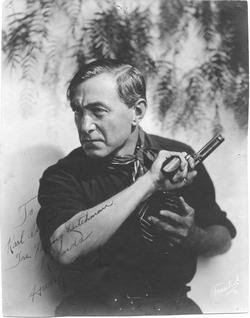 all know he’s going to do that himself. There’s a good car chase – well, wagon chase – culminating in a remarkable stunt as the wagon plunges into a river and Quirt and Penelope hide under a waterfall. Very oddly, Quirt’s hat changes from white to black after the stunt, though it retains the same handsome silver hatband.

.
The funny thing is that all the characters, even the saloon doves and the heavies, are sympathetic.

.
The final showdown is clever and dramatic.

.
It’s a nice little film, no great Western perhaps but Wayne does a solid job and is occasionally powerful. It’s worth seeing, however, even by non-Waynists, for the performance of Harry Carey.

It was remade, as Angel and the Bad Man (subtly different) in 2009 – click the link for our review – but the original is a lot better.