Oh dear. This was the last of the Howard Hawks/John Wayne Westerns and the worst. They started in 1948 with the splendid Red River and went downhill from there, via the lively Rio Bravo to the clunky El Dorado and finally to the downright turgid Rio Lobo. 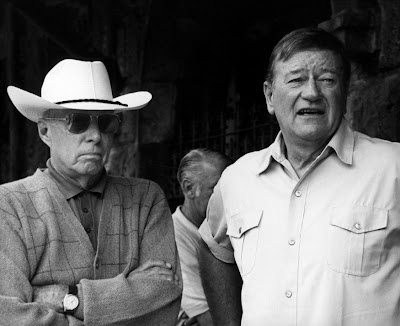 The last three had a lot of plot in common – to say the least. Rio Lobo starts in the Civil War with Union Colonel John Wayne having gold robbed from a train by Confederate Captain Jorge Rivero. Wayne thinks this is just the fortunes of war and he doesn’t hold it against the Rebs but he sure wants the spies who sold the information about the gold to them.
.
.
After the war he goes home and finds them and shoots people and so forth. I can’t remember the ins and outs of the plot. They’re too silly and contrived. Anyway the bad guys get their just deserts.
.
.
Wayne, 63, looks overweight and tired. The script is wooden and the delivery by the actors woodener. Sorry, but Sherry Lansing is dire.
.
.
No one pretended that Rio Bravo was a great movie (well, hold on, some people did) but at least it is fun. This one is, well, tired. Robert Mitchum turned it down. After reading the script, he said it was “an even bigger piece of crap than El Dorado.”
. 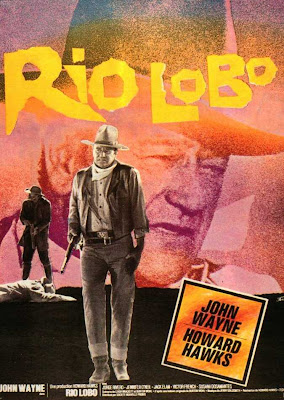 There are saving graces: there’s a sub-Rio Bravo shoot-out at the end (I woke up for that). There’s some nice William Clothier photography (Mexico and Old Tucson), and quite a stirring Jerry Goldsmith score (and lovely guitar music over the titles), and there’s a good performance by cranky old Jack Elam with his shotgun, doing his Walter Brennan bit (actually, he was a decade younger than Wayne).

.
.
There’s an amusing documentary by reporter George Plimpton about how he became a heavy and was shot in the saloon (he is billed as “4th Gunman”).

The rather tragic Western actor Don ‘Red’ Barry was in it but by this time he was down to “Barman, uncredited”.