A hard-bitten marshal of the Rooster Cogburn kind
.

John Wayne’s antepenultimate Western, Cahill is a conventional AV McLaglen flick enlivened by some excellent performances by a host of character actors from Marie Windsor (a real Western vet), Hank Worden reprising his ‘Stationmaster Elwood’ role from Chisum, Denver Pyle as ‘Denver’, Royal Dano as a hostile Scot, Harry Carey Jr as the sheriff’s factotum, ex-child actor Jackie Coogan (who worked with Chaplin on The Kid) brilliant as the town drunk and James Nusser, the town drunk from Gunsmoke, as the doctor. They all have small parts but are terrifically good. Above all we have the excellent Neville Brand as Chief Lightfoot the tracker and George Kennedy as a splendid villain. 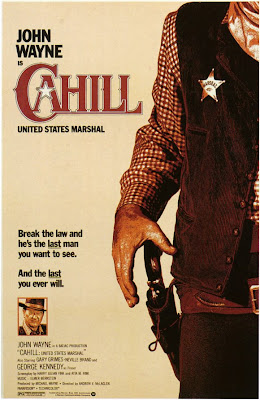 The two boys, the sons whom Marshal Cahill has neglected and who try to get their father’s attention by robbing a bank (that would get his attention), perform really well. Gary Grimes, star of Summer of ’42, is the elder, who gets them into all the trouble, and Clay O’Brien, the pint-sized kid from The Cowboys, is outstanding as the little one. He had such a malleable face and the look of sheer horror whenever Kennedy threatened him is hilarious. O’Brien went on to be a six-foot rodeo star.

.
.
Set in Texas but filmed, like so many of these later Wayne Westerns, in Durango, there is some excellent photography by Joe Biroc (Clothier was unavailable), especially the night shots showing the bad guys terrorizing the boys and some lovely outdoor scenery. Unfortunately, too much of the movie was shot inside on a sound stage in a huge barn or warehouse.

.
.
They say that John Wayne lost interest in the movie half way through when he heard John Ford was dying of cancer but it doesn’t show, professional that he was. Of course, Wayne was to die of the same only a few years later.

.
..
Here he is a hard-bitten marshal of the Rooster Cogburn kind, again.

.
.
There’s very good music from Bernstein despite a horrible soppy song in the middle.

.
.
It’s really a nice film. Nothing as fine as The Shootist, to come, to be sure, and much more in the tradition of Wayne’s standard 70s Batjac fare, but McLaglen handled it well( he didn’t always) and it makes an enhoyable view.

PrevPreviousRio Lobo (NGP, 1970)
NextAngel and the Badman (Republic, 1947)Next
Jeff Arnold © 2022 – All rights reserved – Designed by BetterCallChris
Scroll Up