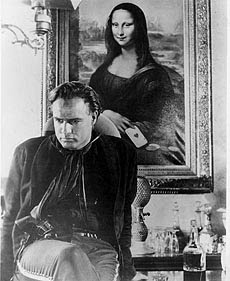 One-Eyed Jacks is a rather second-rate Western which is supposed (but often you wouldn’t know it) to be based on the story of Billy the Kid.
.
.
Marlon Brando was not good in Westerns and this one, which he both directed (not very well) and starred in, is a curious mixture of the violent and the soppy. We have whippings and hand-crushing and shooting in the back all against a backdrop of lurid color, tropical lushness and slushy music. It’s not a usual Western setting: Monterey, California, with many beach scenes and much crashing Freudian surf.
.
.
It’s a pretty straightforward revenge drama. Karl Malden double-crosses Brando in Mexico and Brando spends five years in a Mexican prison then turns up in Monterey where Malden has become sheriff. Mrs Malden is Katy Jurado, beautiful and splendid as ever, and her daughter is Louisa (Pina Pellicer). Brando tells Malden that all is forgiven but it isn’t. He cynically seduces Louisa and plans to kill Malden. 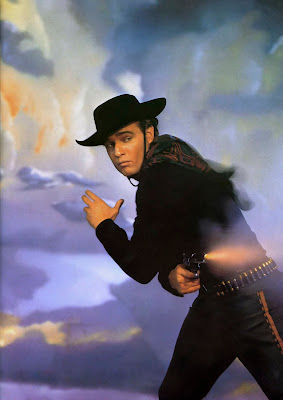 There are some very good supporting actors, notably Slim Pickens as the cowardly bully of a deputy with a large beer gut, and Ben Johnson as one of the outlaw band that Brando leads (Johnson brilliantly plays fear in one scene, out-acting Brando by miles). In this picture all the men are base and all the women beautiful and wise.
.

.
Malden overacts, as usual, and never convinced as a Westerner; he was better in cops and robbers dramas. Brando is far too mannered and is not at all believable as a real tough gun hand. He is almost foppish. There is too much talk and too much self-conscious posing. At 140 minutes, the movie is overlong (the original cut ran, Heaven’s Gate-style, five hours, saints preserve us).
.

.
The story is from an adaptation by Rod Sterling of a Charles Neider novelization of Billy the Kid’s life, with a later revision among others by Sam Peckinpah. But the relationship with Billy the Kid is tenuous at best.
.

.
There is the inevitable shoot-out at the end and love blooms. It’s all rather turgid, really. But it’s worth watching for Ben, Slim and Katy.